22 2016 June
23
In 1954, Hiller was awarded a contract with the Pentagon to design and build an ultralight helicopter designed for just one person. The Hiller ROE Rotorcycle, also known as the Hiller XROE-1, made its maiden flight on January 10, 1957. As a result, Hiller released only a small batch of pre-production samples of the XROE-1 Rotorcycle, a number of similar machines were assembled under license at the facilities of the British company Saunders-Roe Ltd, while the car was never transferred to mass production. A total of 12 or slightly more ultralight single-seat helicopters were assembled, 7 of which are today in various aviation museums, and one in a private collection.


Structurally, this helicopter, which is also called the rotorcycle, was a vertical pylon with a chassis in the form of three pillars that formed the pyramid. The pilot's seat was attached to the lower part of the pylon, the tail boom was attached to the upper part. Over the pylon was installed bearing two-bladed screw. The power plant was introduced to the 4-cylinder engine of Nelson, which developed the power of the 43 hp. The maximum speed of the miniature helicopter was 125 km / h, the flight range was 267 kilometers, the practical ceiling was 2800 meters.

This little technical masterpiece remained unclaimed. The aircraft, which could land on absolutely any platform, attracted increased attention from military and civilian customers, but no more. The Americans believed that Hiller XROE-1 had a bright future, including as a personal transport, but after building several copies collected in the US and in the UK, the project did not receive proper development and was closed, forever remaining one of the many experiments in stories world aviation. 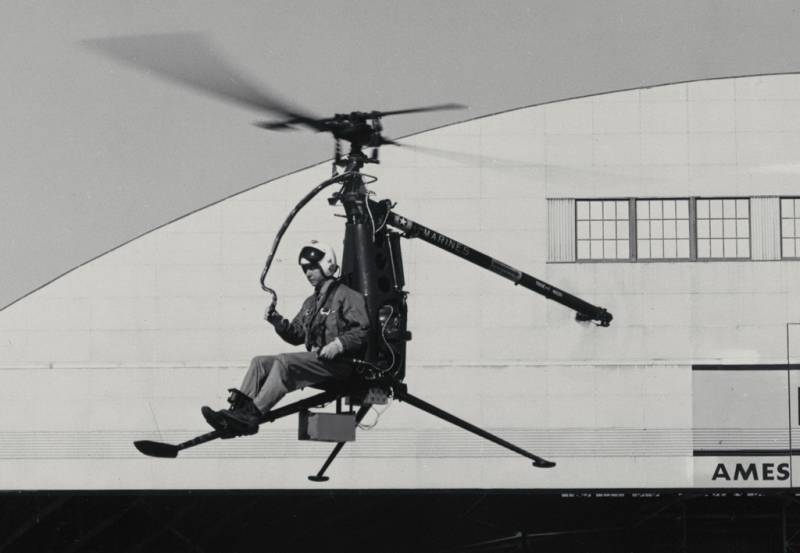 The history of the ultralight single helicopter Hiller ROE Rotorcycle

American designer Hiller received an order for the development and serial production of a small single-seater helicopter from representatives of the US Navy naval aviation in 1954. The first flight of this unusual device, which received the designation XROE-1, took place on January 10 1957. By July of the same year, the entire complex of flight tests of the machine was completed, and during their conduct the military noted the considerable potential of this miniature helicopter and thought about sending it into mass production. After completing the trials, Hiller began a demo tour with a prototype of his helicopter, which lasted 4 for a month and passed through US military bases. At the same time, an unusual aircraft was also presented to representatives of European states, members of the NATO bloc. He did this for the sole purpose, trying to find sales markets for his apparatus, to determine the potential demand for it and to work out the possibilities for the mass production of the rotorcycle abroad.

In September 1958, the US Navy agreed with the company Heeler contract for the construction of five aircraft, which were designed for the Marine Corps (ILC). This rapid adaptation of the unusual aircraft to the needs of the ILC further fueled interest in the unusual helicopter abroad. Journalists from European countries wrote about an unusual aircraft, calling it a “pocket helicopter”, and the British company Saunders-Roe LTD even bought a license to issue these rotary cycles. In this case, all the components would still be delivered to the UK from overseas. 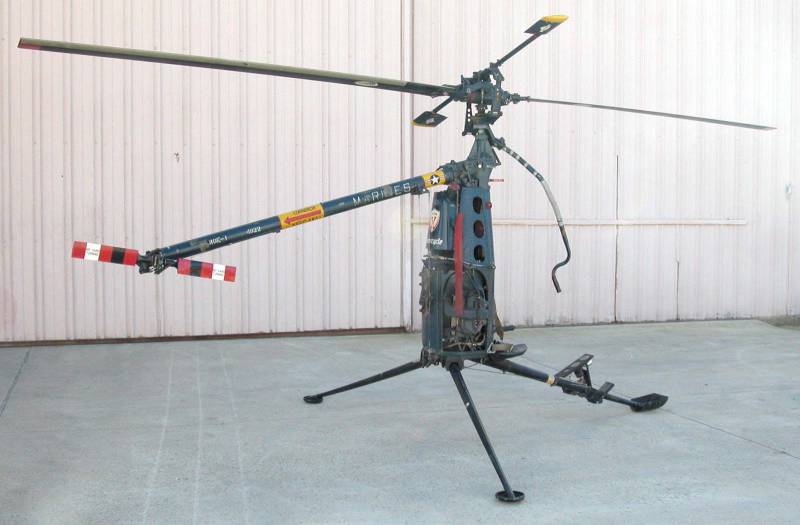 In the US, a total of 10 aircraft were released: 5 for the Marine Corps and 5 for demonstration flights that were conducted in different countries of the world. So, one of the rotorcycles was introduced in France. The prototype shown here at first even became interested in the French company Helicop-Air, which initiated negotiations with Hiller’s company to purchase a license for the release of this unit in Europe, but rather quickly these negotiations reached an impasse. The French company limited itself to only demonstrations of this ultra-small single-seat helicopter based on Issy-les-Moulineaux.

The Americans were interested in using an unusual aircraft for military purposes. In particular, they were extremely interested in the options for using a miniature helicopter as a coherent, reconnaissance, tactical machine for small military units. Indeed, the military use of this single-seat helicopter required minimal logistical efforts, since it could be transported in the most ordinary container by road or by light aircraft, and it could be used from any platforms. It was also planned to be used as a means of rescue and a vehicle for evacuating the wounded from the battlefield.

But they were for an unusual aircraft and purely civilian tasks: observation of civilian objects (work in the police, forestry, customs, control of dams and transmission lines). In addition, a single-seat helicopter could be used as a vehicle for representatives of certain peaceful occupations (postman, doctor), especially when working in difficult terrain. 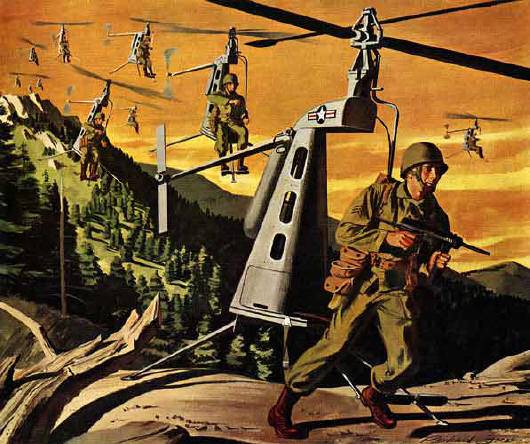 At the same time, the civilian use of the apparatus at that time was not so relevant, since the cost of serial copies was overestimated and ranged from 4 to 5 million francs. In addition, in order to pilot this rotorcycle, it was necessary to have a valid diploma of a helicopter pilot. It is worth adding here also the fact that many journalists feared the use of such an aircraft in the city. For example, Maurice Morel, an employee of the French magazine “Equip” (L'Equipe), called the single-seater helicopter a “sky scooter”, noting that if two scooters collide on a city street, it’s not so bad, but 50 meters, it can be fatal, and not only for pilots, but also for people who will be downstairs.

The single-seat helicopter was very compact and could easily be transported by different types of transport, it could also just be parachuted in a special container without any threat to break upon landing. At the same time collecting a miniature aircraft was very easy. The assembly of the helicopter was provided by means of only 13 easily-fitted locks, which formed both the steering beam, and the chassis, and the propeller blade. The car could be brought to a fully operational state in just 10 minutes, while doing everything according to a fairly simple instruction that explained the installation and assembly sequence. The device was disassembled according to the same instruction, but all actions were performed in the reverse order.

The rotor-wheel itself consisted of a semi-monocoque pylon in which an 43 hp engine was installed, a three-post aluminum chassis that absorbed energy during landing, as well as the simplest tail boom. In this case, the pilot was in the open seat of the simplest design, being fastened in it with a conventional belt. On a single-seater helicopter a two-bladed propeller was used, which was located on the main pylon and had a diameter of 5,62 meter. The tail screw had a diameter of 0,91 meter. The prototype number “2”, which was ready at the end of 1960, was additionally equipped with a stabilizer on the tail boom. 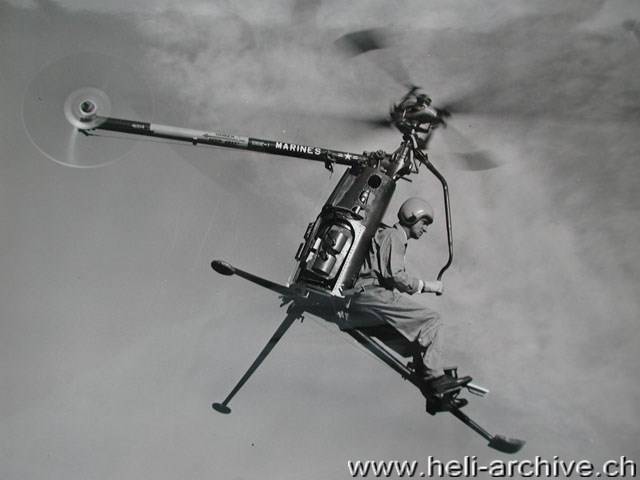 Initially, the fuel tank was installed directly above the engine, but later it was transferred to the place of attachment of the tail boom to the main pylon and it acquired the shape of a sphere. The Nelson four-cylinder two-stroke engine used on the helicopter developed the power of the HP 43. at 4000 revolutions per minute. At the same time, its weight did not exceed 20 kg, and the engine was cooled using air flow during the flight. The instrument panel, which was located on the nose landing gear, consisted of a tachometer, altimeter, anemometer and fuel gauge. In addition, a single helicopter could be equipped with a very light transceiver station. At the ends of the tricycle landing gear, floats could be installed for landing on the water or even skis in case of helicopter use in snow-covered mountainous areas.

A compact single-seater helicopter could fly a pilot (weighing approximately 77 kg) and various military cargos with a total weight of up to 116 kg. Characteristics of the machine is very different depending on the load carried by air. The empty helicopter weighed 140 kg, and the maximum take-off weight was equal to 255 kg. With a weight of 220 kg, the aircraft could rise upwards at a vertical speed of approximately 3,45 m / s (at sea level), but at a height of 1500 meters this speed dropped to 3,05 m / s. With a maximum take-off weight, the rotary cycle climb rate decreased, making 4,67 m / s and 2,70 m / s, respectively. The maximum speed of the vehicle was 125 km / h, cruising - 84 km / h. At the same time, fuel consumption was approximately 18 liters per hour, and its supply provided the small helicopter with a maximum range of 267 km.

According to the pilots flying on the rotor, it was more convenient to fly a small vehicle than the most ordinary helicopter, since its inertia was much smaller, and the device behaved much more stable in the air than an ordinary heavy helicopter of those years. First, the pilot sat in his seat, like on the most ordinary bicycle, lifting his leg, after which he sat down more comfortably and set his feet on the control pedal. Starting a single-seater helicopter was very easy due to the electric starter, and it took less than a minute to warm up the engine. After the device landed on the ground, the rotor brake stopped the rotation of the blades of the helicopter for five seconds. 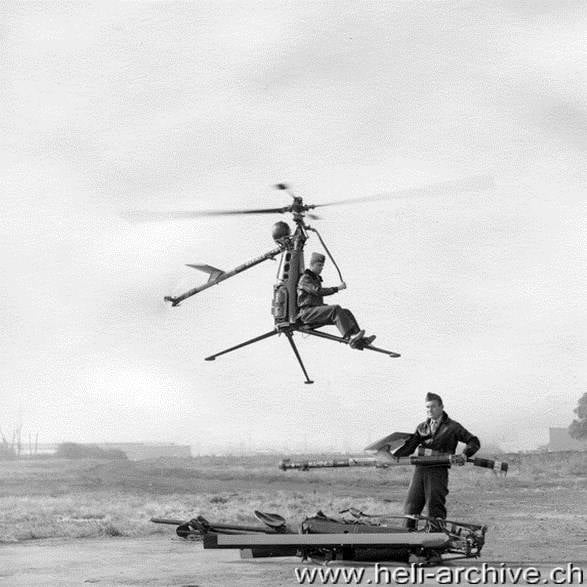