Fought as for Russia


The Narev operation 10 – 20 July 1915 of the year is almost unknown to the domestic reader. But in a strategic aspect, this battle decided the fate of Warsaw. So what was it - victory or defeat?

After the end of the Third Battle of Prasnysh, Russian troops in north-eastern Poland were able to withdraw and gain a foothold at the turn of the Narew, a right tributary of the Vistula.

Strategically, the Narew operation was one of the links in the enemy’s second Strategic Summer Cannes stage - on the northern flank of the Polish ledge. In the case of the rapid advance of the German troops and the success of the enemy armies on the southern flank of the "Polish balcony", our group in central Poland was surrounded. Moreover, a huge breach in the center of the Russian front could have the most adverse operational and strategic consequences and lead to a curtailment of the country's participation in a world war.

The general of artillery M. von Galvits, realizing the tasks set by the front command, directed the main blow of his grouping to the positions of Russian troops in the cities of Rozhany (Ruzhin) and Pultusk. Under the cover of this maneuver, the German troops were to force the Narev above and below Rojan, taking advantage of the woodland in the valley of the river.

Our task was to sustain the defense of our positions in order to gain time needed to withdraw the formations of the 2 and part of the 4 armies from central Poland. The central group of the North-Western Front included 12, 1, 2 army and the Osovets fortress. The first two bore the brunt of the Narev operation.

The primary period of the battle was characterized by fierce battles for bridgeheads. The left flank of the German 8 Army (1 and 11-I land divisions) was constrained by the actions of the Osovets Fortress. Her heroic garrison pulled over an entire enemy corps.

The strike force of the 8 Army (10-I landver and 75-I reserve divisions) led the offensive between Lomzhe and Ostrolenka. Considering the fact that the Russian troops (the 5 Army Corps and the 9 Siberian Rifle Division) had a strong position on the right bank of the river, the Germans made four-day artillery training. The enemy’s hurricane fire destroyed the Russian trenches and field fortifications, but despite this, enemy attacks invariably fought back.

At the combat site of Ostroleka - Rozhany, there was a lull until July 12. But on the night of the 12, the German troops crossed the Narew below Ostrolenka along the ford found by the scouts - the summer of the 1915 was so hot that the river became shallow. The German infantry was entrenched on the left bank, on the right was a strong artillery grouping that allowed the enemy to hold the bridgehead. But Russian troops counterattacks did not allow him to expand. 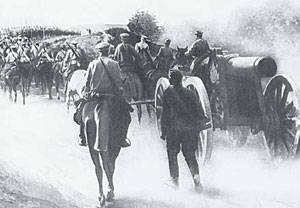 The Russian rozhansky bridgehead was attacked on the night of July 10. The suddenness of the attack forced our units to withdraw to the second line of defense. Germanic sources point out the surprising persistence of the Russian troops. Only the crossing of the enemy below Rozhan, which threatened them with a tactical environment, forced them to retreat to the left bank of the Narew.

On July 12, the Germans, taking advantage of the stretched position of the 21 Army Corps, with the hurricane support of artillery of all calibers, attacked its right flank with considerable forces. At the same time, the enemy launched an offensive in the northeastern direction along the River Oge and hit the bridgehead at Pultusk. The 30 and 40 units of the infantry divisions heroically repelled the attacks of the many times superior enemy. Pultuskaya bridge position in the morning of July 10 beat off the Germans for two days, but its defenders, suppressed by the enemy’s fire and numerical superiority, slowly began to retreat to the left bank of Narew. Having secured themselves to the southeast of Pułtusk, the Russian troops stopped the enemy.

In order to guarantee the evacuation of Warsaw and to prepare the troops for withdrawal from central Poland, Russian connections on Narewa were required to hold out for several more days.

In this situation, the German command turned all its attention to the direction of Rojana - Ostrov. Here, at the junction of 1 and 12 armies, a fierce battle was fought for seven days. Both sides focused on this direction almost all the reserves. These battles are an example of the unsurpassed courage and unparalleled stubbornness of the Russian troops. A number of parts lost to 2 / 3 personnel. The Germans, possessing superiority in manpower and in technology, fiercely stormed the Russian positions day and night, repeatedly broke through the front, but the Russian troops counterattack restored the situation.

The fight in the operational direction of Rozhany-Ostrov was per each meter of territory, and during the seven days of the battle the enemy was able to advance only 18 kilometers. Germans actively used heavy artillery, airplanes and aerostats.

In other parts of the battle of Narew, fierce fighting took place on both sides of the river. Nevertheless, even by the end of the operation, Russian troops retained their bridgeheads on the right bank - on the Lomzhinskoy fortified position on the Ostrov-Serock line.

From Warsaw without defeat

During the 11 days of extremely stubborn fights, the Gulvitsa group was able to capture only a few bridgeheads on the left bank of the Narew. The forested and marshy nature of the terrain made it easier for the enemy to force the river, but at the same time made it difficult to maneuver and did not allow large troop masses to act. Instead of a ram attack, the German offensive broke up into a series of isolated advancements of varying degrees of power, but the strength of each was insufficient for a decisive result. Of particular importance for the stability of Russian troops was the fact that the flanks of the 1 and 12 armies relied on the fortress. Great influence on the course and outcome of the operation had the ability of the parties to operate with reserves and understanding of the command of their role in the modern war.

Military historian G. K. Korolkov wrote: “This battle is one of the most instructive on the Russian front. Here you can see the influence of the Osovets and Novogeorgievsk fortresses, which covered the flanks of the 12 and 1 of the Russian armies, the struggle for fortified positions at Rozhan and Pultusk, the crossing of the Narev, the struggle for random and poorly prepared rear positions and the interaction of different types of troops. ”

When on July 18 the Germans broke through the front of the 4 of the Siberian Army Corps, the situation was restored by a horse attack of the 1 separate cavalry brigade (19 of the Dragoon Arkhangelsk and 16 of the Irkutsk Husar Regiment). The Russian cavalry suffered heavy losses (the Archangelsk city lost two squadrons), but once again solved the most important tactical task - eliminated the breakthrough.

In strategic terms, the battle on the Narew decided the fate of Warsaw. The enemy was unable to achieve the main goal - to break through to Sedlec, closing the supposed “Cannes” ring from the north.

The German command of the Eastern Front was forced to state: “The operation in the east, despite the holding of the Narev strike, did not lead to the destruction of the enemy. The Russians broke out of the ticks and achieved frontal withdrawal in the direction desired for them. ” The Quartermaster General of the Eastern Front, M. Hoffman, noted: “Having crossed the Narew, the 12 Army hoped to have time to cut off some Russians from Warsaw. This hope has not been justified. ”

Russian troops left Poland to consolidate the front on the new frontiers and continue the struggle.