27 2016 June
56
Starting from Djibouti, Beijing will fight jungle law across the continent.


The activity of China in Africa in the last decade is unprecedented. He successfully crowds the old colonialists in the local markets and leads among the new players gaining strength.

Relations with Africa are part of the Beijing strategy of creating a new world order. China needs support from international organizations. He needs allies in the confrontation with the United States. Therefore, the countries of the Black Continent, many of whom remember Beijing’s help in the struggle for national independence and the establishment of statehood, occupied an important place in the Chinese plan to form the Southern Bloc as a mechanism to counter the challenges of globalization.

According to many political scientists and economists, there is a re-colonization of Africa. Trade between the countries of the continent and China is growing at an explosive pace, while French and American influence here has waned. African exports to China (primarily natural resources) increased from 2005 to 2014 from 5,6 to 93 billions of dollars. In the next decade, China intends to invest more than 100 billion dollars in a number of countries south of the Sahara. And such investments must be protected.

Beijing intends to create ten “strongholds” for its naval force in Africa in ten years fleet - on the "principles of mutual benefit and friendly relations." The first base is being built in Djibouti, the country of the Horn of Africa. This is the point of material and technical supply of the Navy, similar to our Tartus in Syria, but with a land contingent and aviation (helicopter) group. The main objective of the base is to support Chinese peacekeepers and anti-piracy units operating in the region. Now Beijing is participating in 16 UN peacekeeping missions in Africa, having two thousand bayonets here.

In the future, the site in Djibouti will be reformatted into the largest Chinese military base abroad and a logistics center for “projections of force” on the Black Continent.

Strong points are designed taking into account the functional orientation:

the first type, where Chinese warships will be able to get into the parking lot, to replenish stocks of fuel and food;
the second - additionally equipped with recreation areas for Chinese sailors, as well as airfields for reconnaissance aircraft;
the third - with the ability to repair large warships and aboard them weapons.

The creation of these points will be accompanied by an increase in berthing fronts, the construction of infrastructure for ship repair, the modernization of port equipment, and the implementation of dredging works. The seriousness of the intentions of the Chinese military is indicated by the fact that Beijing turned to Moscow for advice on the rapid and covert deployment of military bases in foreign countries. According to a source from the Department of Logistics of the Russian Army, the Chinese partners were enraptured by the creation in a few weeks of our VKS base in Hmeimim. Negotiations are held with colleagues from the PLA on the possible participation of our specialists in the creation of such objects. 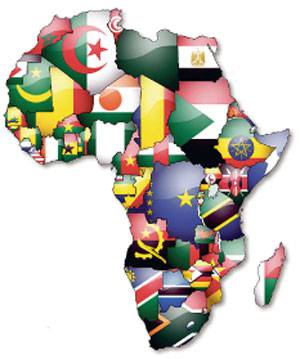 Sad experience of losses in Africa, Beijing has. Under Gaddafi 75, large Chinese companies have invested 18 billion dollars in Libya. In 2011, the investment was lost. Moreover, China had to organize the evacuation of 35 thousands of their fellow citizens from Libya. In addition to the main and official motive for the creation of military infrastructure in Africa - the protection of investment, there are other reasons for the forceful accompaniment of China’s economic aspirations in the region. This includes ensuring the security of key routes for Chinese tankers and bulk carriers, and rivalry with the United States.

Successful China began to pose a real threat to the global hegemony of the United States in many aspects, chief among which is the competition of economies. In addition, the Middle Kingdom, which, according to the United States, is the workshop of the world, organized by them for filling the paper dollar with content, is showing more and more initiative and independence in locating the surplus of the American currency, buying production capacity already under the nose of the hegemon. The goal of Washington and its satellites is to squeeze China out of Africa or, at a minimum, to limit its access to the depths of the Black Continent. Resource-secured China, they believe in the think tanks of the Pentagon and Washington, can also become politically independent. This is not included in the plans of American strategists. In order to prevent China from obtaining resources and slow down the development of its economy, the United States is trying to block Beijing’s initiatives in Africa.

However, this does not prevent China from building up its military presence in the Black Continent through the peacekeeping contingent under the auspices of the United Nations. When it is necessary to maintain a large number of “blue helmets” in Africa and their chronic underfunding, the Chinese offered their eight-thousand contingent of “police troops” to the UN, which was most likely favorably received. It is clear where these forces will go: Beijing has repeatedly declared its non-participation in Middle Eastern peacekeeping projects (there are four of them, including Cyprus). And the missions in Haiti, in Kosovo and on the Indo-Pakistan border are a total of 6750 people. And it is difficult to imagine that the United States, Europe and India will allow Chinese policemen to their borders. Africa remains.