White revenge or an attempt at reconciliation? Evil Ivan №30 with Ivan Victory 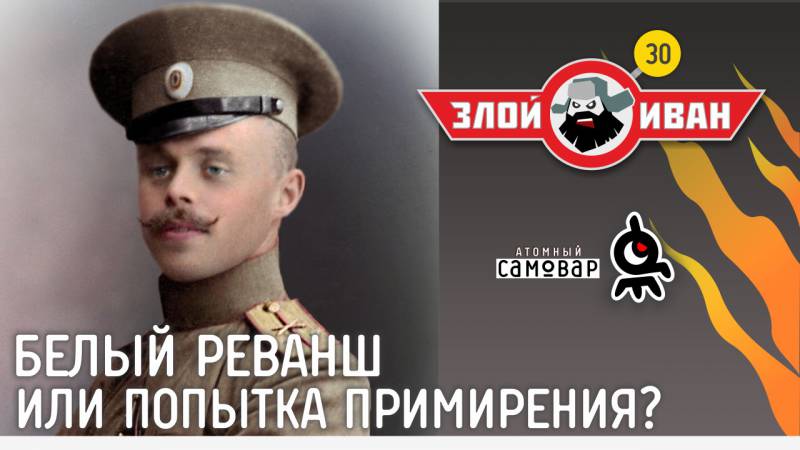 Hello to all ours and not to ours! I am Ivan Victory and I am angry again today!

In St. Petersburg, a memorial plaque was installed on the building of the Military Engineering Technical University with the name of General of the Russian Army, and later - Marshal and President of Finland Karl Mannerheim. Vladimir Medinsky and Sergey Ivanov were among the officials in this event. They justified this action in unison, stating that it was not at all the rehabilitation of fascism. "Nine! This is a tribute to the memory of the Russian officer."

Let me remind you that Karl Mannerheim served in the royal army and served in it to the general. Well done! And then he fought against the Red Army during the Russian-Finnish war. Well, the culmination was the war against the Soviet Union. Finland was an ally of Nazi Germany during the Second World War. And the Finnish troops under the command of the same Mannerheim staged a blockade of Leningrad. And he also had concentration camps where Russians were killed. That such a many-sided person was this Karl.

But continuing the logic of the event, the next will be a monument to Vlasov. After all, he, too, was promoted to general in the Soviet Army. And then he became a traitor. And he fought against Russia and its people on the side of the fascists. What is his biography is fundamentally different from the biography of Mannerheim? Well, and then you can zababahat the monument to Hitler, since such a booze has gone.

Yes, I, of course, exaggerate a little. But what am I leading to? To a simple thought that the current authorities often forget about. A perfect betrayal or crime negates any past merits. You can not rehabilitate enemies and traitors. You can talk about them in textbooks storiesin encyclopedias. And even open plaques ... but only on their graves.

You can understand the purpose of the current movement with the rehabilitation of the White Guard officers. And this goal can even be justified. The aspirations are quite noble and pragmatic - this is an attempt to overcome the ideological split among the people, to pacify the red and white. But the government must see the framework beyond which it is impossible to leave.

And yet, I had a persistent suspicion that the lobby of the balkhrusts had already crammed some of the officials with stories about the charms of Russia, which we lost. About the county estates, about personal stables, about balls and indispensable serfs, which could be sold and bought by entire villages and villages. And some officials, having dreamed of princely and earl titles, rushed with excessive zeal to promote the ideas of monarchism, whiteguardry and other mothballs of Tsarist Russia: "Way, sir!”

But fuck you! The authorities should not step on the same rake again - this can lead to another bloody civil war. But if the authorities decided to really pacify the whites and reds, it is necessary that she do it consistently. Judging from a historical point of view, both the Reds and the Whites defended their vision of the arrangement of the Motherland. Both those and others sincerely loved her and went for her to die. But after the victory of the red over the white, the royal officers had to accept this result, and start working for the benefit of the common homeland. Some of them managed to overcome their pride and helped rebuild the country lying in the ruins. And someone, until his death, permanently destroyed the Soviet Union and the Russian people. And this is the border that separates from betrayal. And many Balkhawks in emigration crossed it. And after that moment they ceased to be Russian and erased all former services to the Fatherland, they obtained in pre-revolutionary Russia. And praise, and other honors to these traitors - this is wrong. This is bad!

Both the communists and the bread crust must understand that all periods of our history are important and valuable for the motherland. They can not be thrown out or replayed. They need to be understood and respected. One of the directions of this reconciliation plan is to foster respect for the supreme power in Russia. Therefore, the monument to Nicholas II was opened, and the Yeltsin Center otgrohali. And I think the same will be with Gorbachev after his death. And I agree here. Both Yeltsin, Nikolai the Second, and Gorbachev were the supreme rulers of Russia. We can not ignore it or say that it was not. Yes, these leaders made terrible mistakes, yes, they did more harm than good. But they are part of our story. And treats it carefully and with respect.

After all, to be honest, we also share responsibility for any historical events taking place in our country. And our fault in the collapse of the Soviet Union, no less than that of Gorbachev or Yeltsin. It seems to me, we must realize and reconcile with this.

I'm not talking about forgiveness. Forgive the millions of dead Russian lives, as a result of the collapse of the USSR, it is impossible ... But you can lower your emotional intensity of hatred, and realize that this is already a story, this is our common past. And be sure to extract from this error. And never repeat them again.

Well, if the authorities want to be honest to the end, then the monarchists and the White Guards should be made clear that this is not revenge and not an attempt to trample, hide or belittle, in fact, the fantastic successes of the Communists. This is not a rematch. This is reconciliation.

That's why I, and I think most Russians of all nationalities will support me, would like to see an equally huge historical center .... well, like the Yeltsin center .... only about Stalin. This historical figure was much more a statesman than Yeltsin, Gorbachev, Nicholas II and other, other historical figures. Monuments, museums and tablets which, with such pathos, are opened by the highest authorities.

And yes, I have the same question for the Russian Orthodox Church. Does she want justice? Since nicholas II was among the saints, why not do the same with Joseph Stalin? After all, he brought benefits to our Fatherland many times more than Nicholas II, who merged everything!

Totals.
Time cannot be returned, it is impossible to return Tsarist Russia, it is impossible to return the Soviet Union. Look around! We have the current Russia, which we can do better, and we must do it. Make it better than Tsarist Russia, better than the Soviet Union or any other historical period in the life of our Motherland! So that on the pages of future history textbooks they would not write about us that we are the generation that lost everything. So that our descendants speak about us with pride and respect. That they were not ashamed of us.

Everything! Believe in your people and your country! See you soon!
Well, comrades and gentlemen, it's time to grind for the Motherland ...
Who among you loves her stronger and more correctly. =)
But, I confess, the video is not funny left ... Perhaps, even very evil! So do not whine! Watch and understand!

Ctrl Enter
Noticed oshЫbku Highlight text and press. Ctrl + Enter
We are
Contrary to Nuremberg: new trends and forms of propaganda of fascismWhat you didn't want to know about England
Military Reviewin Yandex News
Military Reviewin Google News
123 comments
Information
Dear reader, to leave comments on the publication, you must sign in.