23 2016 June
30
Local conflicts in recent decades have had a noticeable effect on the development of weapons and military equipment. For use in specific conditions and on different landscapes, systems with characteristic features that facilitate the performance of combat missions are required. Thus, according to the results of the analysis of recent conflicts, the concept of a so-called was formed in the nineties. assault artillery guns. Soon, a new model of such a system appeared - the M-392 light assault rifle.


The M-392 gun project was proactively created in the OKB-9 (Yekaterinburg), now known as Plant No. 9 and part of the Uralvagonzavod corporation. The project development was supervised by Valery Nasedkin. The aim of the M-392 project was to create a tool of the smallest possible dimensions and weight with a caliber 122 mm. Such systems have some advantages over other artillery weapons and therefore can be used to solve combat missions in difficult conditions, where the operation of other guns is difficult or impossible.

At the heart of the M-392 project lay the need for the greatest possible reduction in the size and weight of the gun. Due to this, it was planned to provide the possibility of towing the gun by various vehicles, including light-duty cars, which allowed to significantly improve the mobility of the system, including on rough and mountainous areas. Also, low weight allows you to transport guns by helicopters, both in the cargo hold and on the external load. With a relatively short firing range (up to 5-6 km), the prospective 122-mm gun was supposed to be an effective means of reinforcing troops at the company or battalion level. 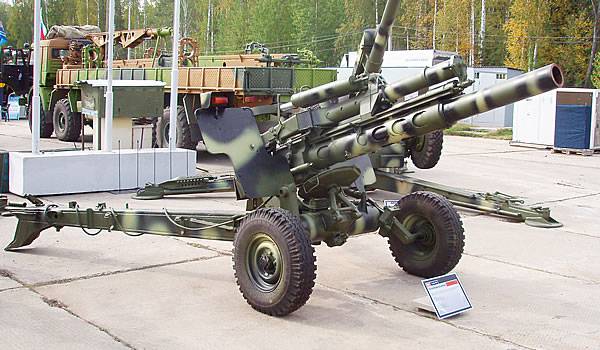 The M-392 light assault rifle project was developed in the late nineties. OKB-9 and the entire domestic defense industry at that time faced serious financial, political and administrative problems, but the designers from Yekaterinburg managed to cope with new tasks and successfully complete the design. By the end of the decade, the project was completed and brought to the assembly of the first prototype.

The prospective M-392 light gun was decided to be made on the basis of the existing sample. In this case, the basic system had to undergo a number of major changes related to the simplified design. In addition, some technological innovations were introduced, which made it possible to significantly update the design of the base sample, created a few decades ago and quite long out of production.

The 392-mm howitzer M-122 of model 30 was selected as the base for the M-1938. This gun was originally produced in towed version, but later several projects of self-propelled carriers of such weapons appeared. According to the experience of combat use during the Great Patriotic War, the M-30 howitzer is considered one of the best Soviet barrel systems of its class. Production howitzers arr. 1938 continued until the mid-fifties, more than 19 thousand guns were fired. A number of such systems are still in service with Russia. In addition, howitzers were delivered to foreign countries and in some cases are also used to this day.

The lightweight M-392 assault rifle retains the overall layout of the base howitzer. The carriage has a pair of sliding beds and a lowered base plate. Also provides for wheel travel, providing transportation tools. In the transport position of the bed and the trunk are directed in different directions, which allowed to simplify the design of the hinges and thereby further reduce the weight. Also, the carriage is equipped with a new form of armor and guidance systems with manual drives. A curious feature of the design of the gun carriage was the use of parts of the smallest possible size with a corresponding low mass.

Initially, the project M-392 implied the assembly of the main elements of the mast of high-alloy steels with the necessary strength parameters. Also worked out options for the manufacture of structural elements of titanium or aluminum alloys. As follows from recent reports, the authors of the project have successfully managed to improve the design of the mast at the expense of similar materials of light weight and sufficient strength.

It was proposed to carry out the transfer of the gun carriage from traveling to combat by carrying out several operations. At the same time, the bedding was made with the coulters placed in the ground, the lowering of the base plate and the lifting of the wheels placed on the swinging balancers. Firing from the wheels, without the use of a base plate, is not provided.

The barrel and associated units are placed on a U-shaped support connected to the pick-up mechanisms and a variety of different devices, including those holding the receiver group. The design of the guidance systems allows the barrel to be deflected from the neutral position on 25 ° to the right and left. Vertical pickup angles range from -7 ° to + 70 °. This allows you to use a weapon for shooting direct fire, and when firing from closed positions. 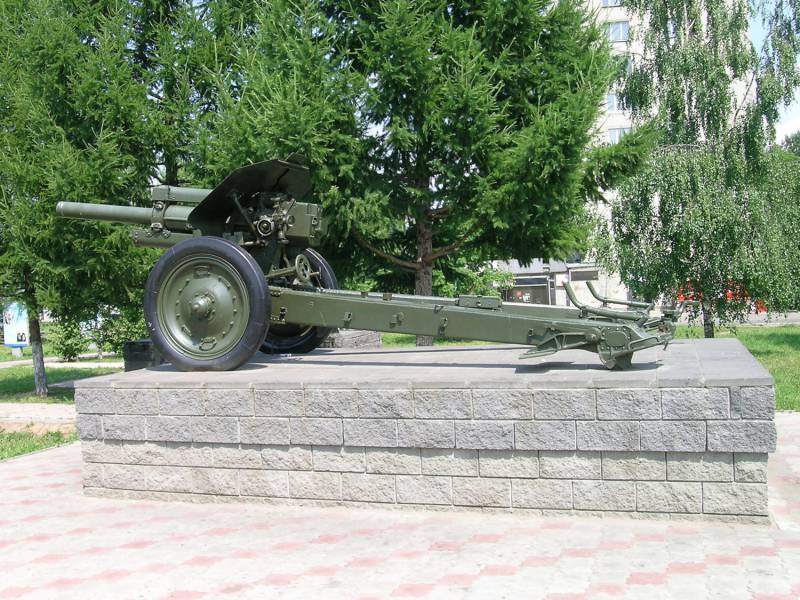 In order to improve and facilitate the design of the barrel and the associated units were re-configured. Thus, in the base howitzer M-30, the recoil devices and the nakatnik were placed above and below the barrel. In the case of the M-392, it was decided to combine all these systems into a single unit and install it above the barrel. In addition, the barrel received a new casing with a perforator to improve ventilation and cooling. Despite the use of recoil devices of a new design, which included a hydraulic spun recoil brake and a pneumatic knurler, the general characteristics of these systems remained at the required level.

A new type of gun gets a rifled barrel caliber 122 mm with a constant pitch of the rifling. Muzzle brake is not provided. Significant changes in comparison with the base howitzer underwent breech. Instead of a piston valve in the M-392, a system with a vertically moving wedge is used. The breech of the gun is also equipped with a trigger mechanism controlled by a lever, as well as by means of ejecting a spent cartridge when recoiling.

To the left of the barrel and recoil devices on one swinging system with them mounted panoramic sight, similar to that used with the howitzer M-30. This device allows you to fire both direct fire and from closed positions. Under the gun are flywheels manual drive pickup.

To protect the calculation in firing gun M-392 has an armor shield of the required size. In view of the need to reduce the overall weight of the structure, the shield is divided into two halves of characteristic outlines. The shield is attached to the support structure of the instrument and can move with it. On the upper edges of the shield there are small boxes for the installation of lighting equipment. On the back of the right half of the shield is a box for storing the necessary property. In the right part of the shield provides a window for the use of the sight when shooting.

As an additional protection for the gunner, a small shield mounted on the cannon support is used. His task is to prevent possible injury to the gunner when the barrel rolls back.

Light assault gun M-392 uses separate-sleeve loading. Ammunition of various types can be used. Compatibility is ensured both with old shells produced for the M-30 howitzer and with new ammunition of the corresponding caliber. Loading is done manually. After firing, the gun automatically ejects an empty cartridge case, allowing you to start preparing for a new shot.

All the new ideas proposed in the course of the M-392 project allowed us to slightly reduce the size of the gun compared to the base system. At the same time, a significant reduction in weight was achieved. A new type of gun without ammunition weighs only 1300 kg. For comparison, the mass of the M-30 howitzer in a combat position reached 2,5 t.

Initially it was reported that a promising light assault gun can fire at a distance of 6 km. Subsequently, after some modifications of the design, the maximum firing range was increased to 8,6 km. The initial velocity of the projectile reaches 270 m / s. A trained calculation can fire at a rate of up to a minute per minute 6-8. It takes about one minute to prepare the gun for firing after arriving at the position. 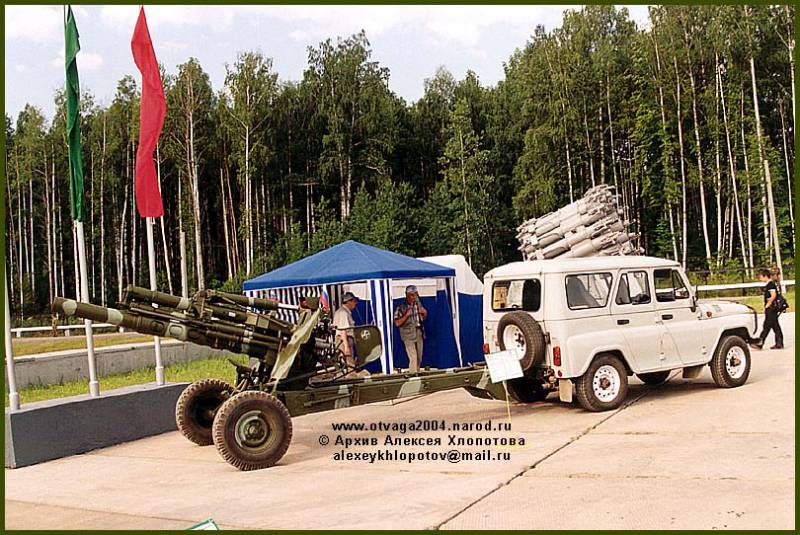 According to the developers, the low weight and the availability of the wheel travel significantly increase the mobility of the M-392 gun in comparison with other systems of this class. The possibility of towing guns with various machines, both specialized tractors and automotive vehicles, including light classes, is declared. For example, at one of the exhibitions of the past years, an assault gun was shown at an exhibition site in a transport position with a UAZ-469 automobile. Thus, a wide variety of vehicles can now be used as artillery towers.

The first prototype of the M-392 gun was first shown to the public in 1999 at the 3rd International Exhibition of Armaments of Military Equipment and Conversion Products in Omsk. Subsequently, this system was repeatedly demonstrated at other similar events. Interestingly, in the course of preparing for one of the last salons, the prototype tool changed its appearance. Initially, this product had a camouflage color in black and green. After the entry of “Plant No. 9” into the structure of the corporation “Uralvagonzavod”, the gun received a brand demonstration “desert” color of this organization.

Back in the late nineties and early 2000s, shortly after the first demonstration, the M-392 light assault rifle was the subject of active discussion. The weapon was predicted for a great future and active use in the troops. For example, the new development could find a place in the weapons system of the airborne troops in need of light artillery guns with high firepower. In addition, M-392 could be used as a mountain tool for arming relevant units.

However, even a decade and a half after the first show, the light assault gun M-392 could not go beyond the landfills and exhibition grounds. For one reason or another, the domestic military department showed no interest in this development and did not order new weapons. Probably, such a fate of a promising project was due to the difficult economic situation of the army, which prevented the purchase of new weapons and equipment in significant quantities.

Despite all the efforts of the development organization, the M-392 lightweight assault rifle, based on the M-30 howitzer, still exists only in the form of exhibition samples. Apparently, when an order appears, the industry is ready to begin production of such systems, but so far no one has expressed a desire to acquire new tools. As a result, the prospects for an interesting project remain a big question. Moreover, there is every reason to doubt the possibility of transition of the project M-392 to a new stage. A promising and interesting tool risks remaining just another development with no real future.