22 2016 June
52
The information war between the West and Russia, initiated by the United States, gives rise to the phenomenon of confusion, some experts say. The arising "paradoxical situations" can confuse opponents, which is fraught with unpredictable consequences. Other experts believe that America exploits the fears of Europe: they say, hordes of Russians are coming to you! And Europe is counting on the "help" of the United States. With similar information attacks, the West is trying to put pressure on Moscow. Some elites in the United States believe that Russia will eventually take on a vassal status. 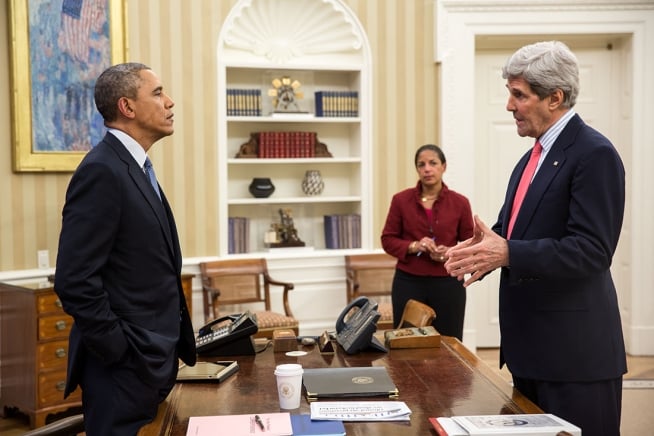 Gilbert Doctorow (Gilbert Doctorow) is a journalist from France, the European coordinator of the Committee for Consent between East and West (USA), the author of the book Does Russia Have a Future? Published in August 2015. In his article for consortiumnews.com The analyst talks about the “info war” going between the US and Russia. More precisely, between the whole West and Russia.

Doctorow believes that the ongoing information war between Russia and the United States, which was initiated by the West, has created special “paradoxical” moments that can even “confuse”. And this “confusion” can be the main goal of both parties. The saying is well known: if you cannot convince your opponent, confuse him. And the current “confusion” can lead to dangerous consequences.

The other day, US national security adviser Susan Rice expressed the hope that the Ukrainian crisis could be resolved soon: by the time President Barack Obama leaves his post. The latter should happen 20 January 2017 of the year. In the meantime, the United States, France and Germany will “redouble their efforts” to implement the Minsk-2 agreement, signed in February of the 2015 year. Rice told the Washington Post reporter that the implementation of the agreements can be completed if only the Russians "show enough political will." According to her, there is hope that the Russians still intend to "solve this problem"; the White House "has some reason to believe that they could do it." In addition, the United States has “the time and the necessary means and tools” to achieve the desired result.

The analyst is not sure whether Rice spoke seriously, or simply tried to awaken a kind of “false optimism” addressed to the unity of the European Union on the issue of anti-Russian sanctions, more precisely, their forthcoming extension for the next six months. The “introduction” from Rice suggests Doctorow seems to be voiced on purpose: in order for Hungary, Italy, and France too, to “shut up” on the question of the hesitation about sanctions.

Meanwhile, the expert notes, these so-called fluctuations in Europe are "greatly exaggerated", partly with the help of "self-deceived Russian media", which "intensively" covered the debate in the Senate of France about easing sanctions. Curiously, the French media "largely lost sight of the vote in their own senate." And such a state of affairs at the information court proves that there are “alternative interpretations” of important events, which, in turn, have a different impact on the opinion of Russian and Western societies. In fact, there is information, built on opposing theses. In this way, the effect of “confusion” is achieved, and as a result, one side no longer understands the other.

But this already leads to quite “real danger,” the analyst believes. The West insists that NATO’s war games, codenamed Anaconda, are designed to deter “Russian aggression”; the other side suggests that these largest maneuvers since the Cold War are practicing the seizure of the Kaliningrad enclave of Russia. Moscow sees the West threatening Russia, expanding NATO all the way to the Russian border and creating a missile defense system in Romania. Moscow also believes that a coup in the 2014 year in Ukraine was organized by the same West.

Such a sharp disagreement about the threats poses a real threat, no longer theoretical, but practical. And the “confusion” in the minds of mankind is needed today the least, says a publicist.

The famous American publicist Paul Craig Roberts argues on the topic of war.

In a note for a multilingual portal Katehon.com He calls the US media the "Propaganda Department." The media in the United States, in his opinion, is the mouthpiece of the military-industrial complex and neo-cons, professing "the ideology of world hegemony." These people would really like to control the whole world, including Russia and China.

Neoconservative ideologues argue that история chose America as an empire to rule the world. That is why they say that the United States is an irreplaceable country, and that the American people are completely exceptional people. “So,” Roberts sums up, “here we see the same ideology that Adolf Hitler had. The rest does not matter. "

Neocons are making efforts to destabilize Russia. The military-industrial complex needs an enemy and needs a budget. The enemy of the cold war is truly a major enemy. Thus, the American military industrialists recreate the Cold War.

To do this, Washington politicians exploit the fears of Europe: “Oh, look, the Russians are going to attack you! We must protect you! ”And here comes the same“ confusion ”that Doctorow is talking about. Europeans are scared when they are frightened, and the confusion is only getting bigger.

Some part of the American establishment (the so-called neo-liberals) are sure that if they put pressure on Russia long enough, then Moscow will make concessions and agree to the role of a “vassal state”. Such installations, according to Roberts, are dangerous because they lead to war.

But the most dangerous in the USA is neoconservatives. Neoconservative ideology clearly says that the fundamental goal of American foreign policy is to prevent the growth of Russia.

In conclusion, a few lines about sanctions against Russia.

21 June became aware of the decision to extend the restrictive measures by the European Union. The corresponding issue has already been resolved, although the sanctions regime may be weakened within six months. This was stated in an interview with Euronews by the head of the European Commission, Jean-Claude Juncker.

“At the moment it is absolutely clear that in June we will extend the sanctions. But over the next six months, we will continue monitoring to see if there is enough progress in implementing the Minsk agreements to lift some of the sanctions, ”Juncker quotes. "Lenta.ru".

There were some explanations. “Simply put, the more implemented Minsk Protocol points, the fewer sanctions,” the head of the European Commission said.

Accordingly, we add, all the loud "opposition" statements that have been heard in recent weeks from some representatives of Slovakia, France, Italy or earlier from Hungary should be considered, as before, empty sounds made by politicians out of the bad habit of producing verbal simulacra.