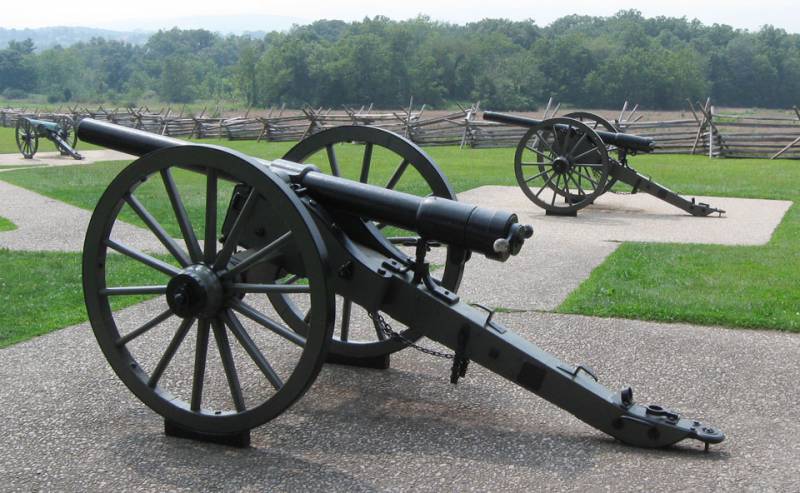 As is known, the US civil war has become a "testing ground" for many types of weapons and military equipment, among which can be called tower battleships, submarines, multiply-charged rifles, armored trains and mitraliezs. It is less known that rifled breech-loading guns were used for the first time in the same war situation.

True, these guns were designed and made not in the US, but in the UK, in the company of Joseph Whitworth. In 1855, Whitworth patented a gun with a hexagonal (hexagonal) barrel and a projectile for it. The edges had a spiral twist and played the role of rifling, but at the same time the projectile went along them freely, without braking, therefore the initial speed of such a projectile was higher, and the range of flight was greater than that of conventional ammunition with leading belts.

An additional advantage was that the "faceted" barrel wore less during firing than rifled. But there was a drawback: the manufacture of such a barrel was four times more expensive than a barrel with spiral grooves. Accordingly, the price of the gun was much higher. Therefore, the British army refused to buy Whitworth guns, although, in the British navy - a much richer structure - they have found application.

The first samples of hexagons were muzzle-loading, but in 1859, Wheatworth presented a line of breech-loading tools consisting of three-pound, six-pound and 12-pound field guns. In England, they again did not arouse interest, but in 1860, seven breech-loading 12-pounds were purchased by the US Department of Defense for familiarization, intending to get a larger batch in case of positive reviews. However, this was not the case.

Guns and ammunition arrived in the country literally on the eve of the civil war, and for some reason they all ended up in the territory of the separated southern states. Of course, the Southerners actively used this "gift of fate", but it was too small to have at least some influence on the course of the war as a whole and even on the results of individual battles.

It is known that the Confederates divided the rifled guns between several batteries that fought on different fronts, with no more than two such guns falling into each battery. In particular, two guns that were part of the 3-th corps battery under the command of Captain Hart, took part in the famous Gettysburg battle, but the northerners noticed them only by the specific piercing howl of flying projectiles. Veterans of the battle said that the one who had ever heard the sound would not forget it to death. Two more guns were used in the Anthite massacre with the same result.

Having quickly consumed the stock of shells from England, the Southerners began to make them on their own. At the same time, it turned out that such ammunition, due to their original form, flies into a solid kopeck. Someone came up with the idea of ​​shooting hexagonals with ordinary cores turned on a hexagon. They were much cheaper, but the range and accuracy of shooting sank very well.

On the range and accuracy of “Whitworth” is worth a special mention. In those days, they were just fantastic. The 12-lb (2,75-inch) field gun threw 5,75 kg shells per 10 kilometers! True, with the then primitive sights and means of observation firing at such distances did not make sense, since the gunners simply did not see its results. A firing of "hexagonalok" on the squares was too expensive pleasure.

But on the ranges of the direct shot, the exceptional accuracy and accuracy of the firing of these guns was manifested. The American magazine Engineering wrote in 1864 that at a distance of 1600 yards the lateral deviation of 12-pound Whitworth shells from the aiming point was only 5 inches! Such accuracy made "Whitworth" an ideal tool for counter-battery struggle and "jewelry" work on point targets. Undoubtedly, if the southerners were not seven of these guns, and once more in 20, and even with the corresponding number of "native" ammunition, the outcome of a number of battles could be much more advantageous for them.

During the fighting, four Whitworth guns were captured by northerners. Two of them are now part of a memorial erected on the Gettysburg Battlefield. Their photo is placed on the screen saver.

The initial muzzle-loading model of Whitworth's cannon and its projectiles. 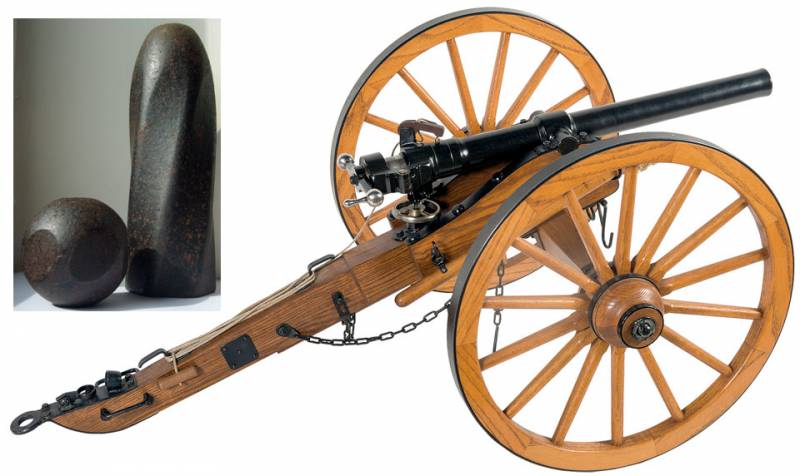 Modern replica of breech-loading "Whitworth" and its ammunition, including the turned core.

"Whitworth" equipped with flaps, screwing on the breech. 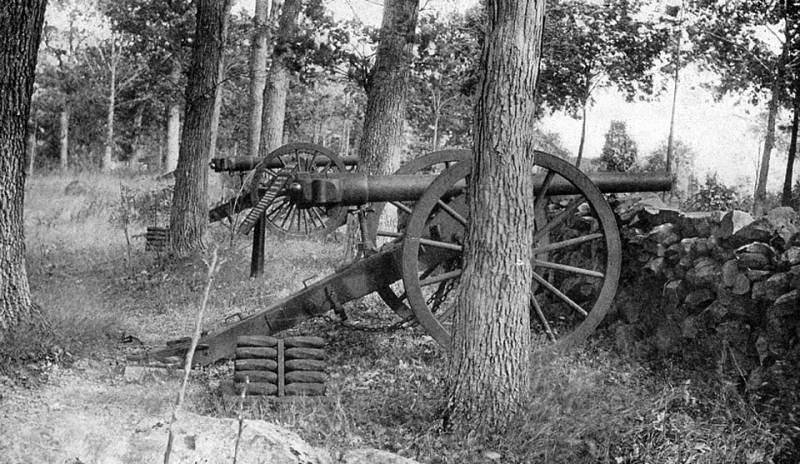 Position "hexagonalok" battery Hart at the edge of the forest near the Gettysburg field. Shells are visible near the carriages of the carriages. 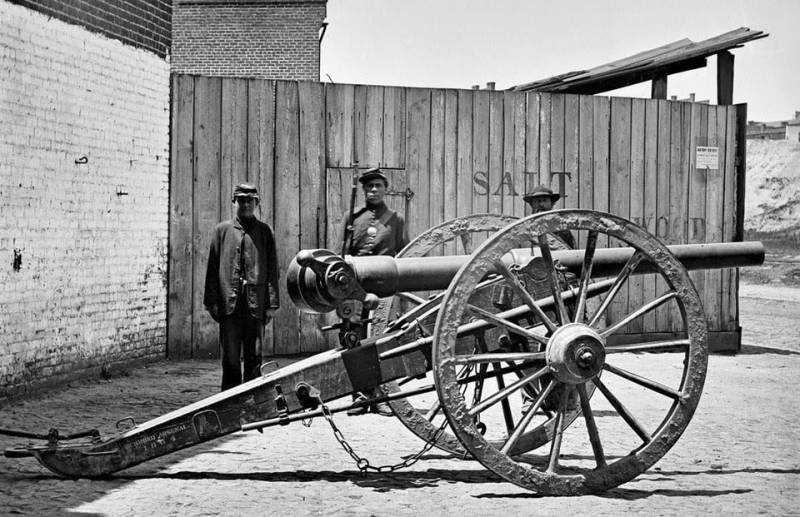 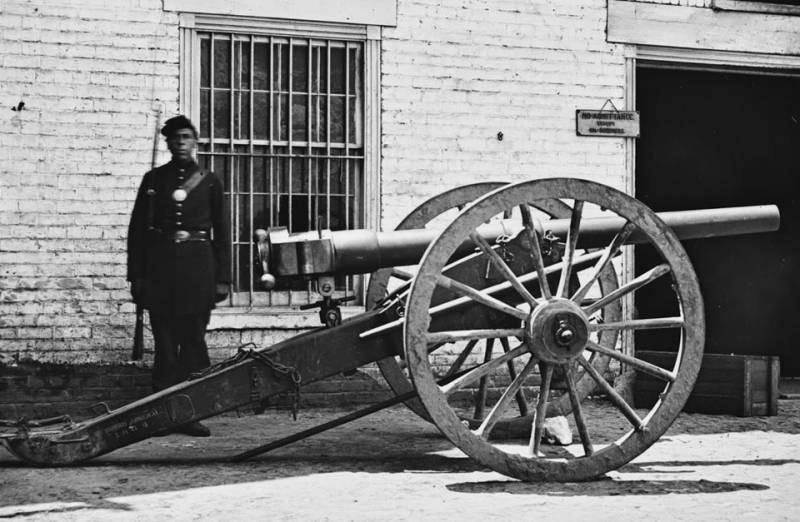 Whitworth's gun, captured by northerners in Richmond at the end of the civil war. Perhaps one of those that stand now as monuments at Gettysburg.