Cartridges do not regret!

It is believed that the unitary cartridge for small weapons Invented in 1812, the Swiss gunsmith Jean Samuel Pauli. The first successful breech-loading weapon for a stud of its own construction of a hairpin, its own design, was developed and made by the French gunsmith Casimir Lefoche in 1832, it was a hunting shotgun. And the first army military weapon with cartridges, combining a bullet, powder charge and ignition device (primer) into one whole, was the famous German needle-rifle Dreyze of the 1841 model of the year.

However, it is not for nothing that they say that everything new is a well-forgotten old, since the earliest sample of breech-loading weapons with unitary cartridges that has come down to us appeared in 400 years before the Dreyze rifle. Bronze wick culevrin hand, photo of which is placed on the screen saver, was made in the XV century. It was originally dated 1470-1500 for years, but recently a drawing and description of such couleurines were found in the manuscript of Italian gunsmith Lorenzo Giberti, who died in the year 1450. This allows you to push the date of appearance of these weapons even further into the past.

The fact that the sample is very early is also indicated by the fact that it was put on the shaft as a spearhead, while the arquebuses of the second half of the 15th century already had wooden lodges and butts rested against the shoulder. And then there were the first triggers - serpentines with a wick holder connected by a swinging lever with a trigger guard. The cartouleur has no such thing yet. Its caliber is very small for those times - only 11 mm, which is why some historians consider it not a fighting weapon, but a hunting weapon.

It has long been known that in the 15th and 16th centuries, breech-loading bombers and falconnies with added charging cells were very common. However, it is impossible to call what the presented kulevrin was charged with as a charging chamber. This is a reloaded cartridge - a light, thin-walled bronze sleeve with an ignition tube, a powder charge, a wad, and a bullet that was inserted into the chamber and locked with a flip sideways. By the way, a number of breech-loading rifles of the second half of the 19th century, for example, Krnka’s rifle, which was in service with the Russian army, had similar shutters.

Cartridge loading allowed to repeatedly increase the rate of fire of the weapon even in the absence of any release devices, and the relative lightness and compactness of the cartridges made it possible to carry a solid stock of ammunition that could be reloaded in a calm atmosphere between battles.

In general, the advantage is obvious, but no less obvious is the flaw that prevented the spread of such weapons and made the military forget about it for several centuries: Such systems and their ammunition were too complicated and expensive by the standards of the Middle Ages and the new time, and therefore unsuitable for mass production.

However, as single samples for wealthy private buyers, cartridge weapons continued to be produced in the future. Below are photos of a magnificent pistol with a wheel lock and a flap, made in Vienna in 1545. With a sufficient supply of ammunition, this pistol could have been fired up to 10 rounds per minute - an unprecedented figure for 16th century single-barreled weapons. 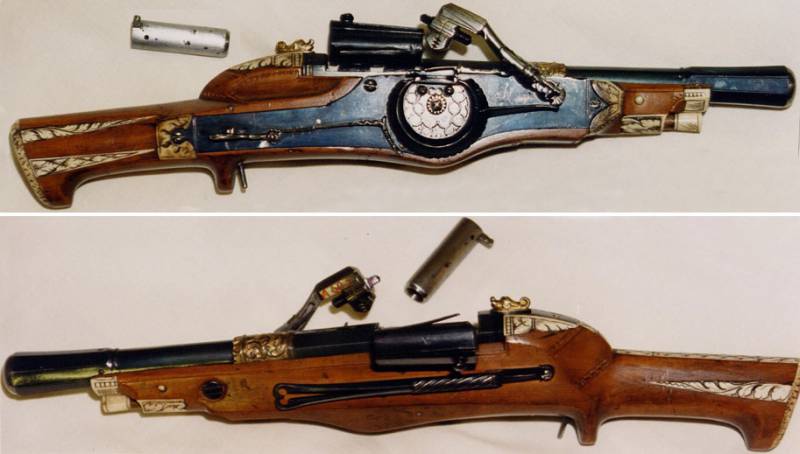