In St. Petersburg, the presidents of Azerbaijan and Armenia with the mediation of Vladimir Putin discuss the issue of resolving the conflict in Nagorno-Karabakh

20 2016 June
142
In the Konstantinovsky Palace in Strelna (St. Petersburg), Russian President Vladimir Putin meets with the leaders of Armenia and Azerbaijan, Serzh Sargsyan and Ilham Aliyev. The subject of the meeting is devoted to the settlement of the conflict in Nagorno-Karabakh. Before meeting in the troika format, the President of the Russian Federation held personal meetings with each of the guests.


The President of Armenia thanked the Russian side for rendering important mediation efforts in the process of the Nagorno-Karabakh settlement. According to Sargsyan, Armenia is set up exclusively for a peaceful, diplomatic solution to the problem.

The President of Azerbaijan also expressed his gratitude to Russia in helping to find a solution to the conflict in Nagorno-Karabakh, stating that the format of the trilateral meeting will be able to impart constructive dynamics to the entire negotiation process.

Before the meeting, the Azerbaijani leader expressed condolences in connection with the tragedy in Karelia.

To the President of the Russian Federation, His Excellency Vladimir Putin.

Dear Vladimir Vladimirovich,
I am deeply saddened by the news about the death of children as a result of a storm on the Syamozero lake in Karelia.
On behalf of the people of Azerbaijan and on my own behalf, I express sincere condolences to you, the families and friends of the victims, the entire people of Russia.
Ilham Aliyev. 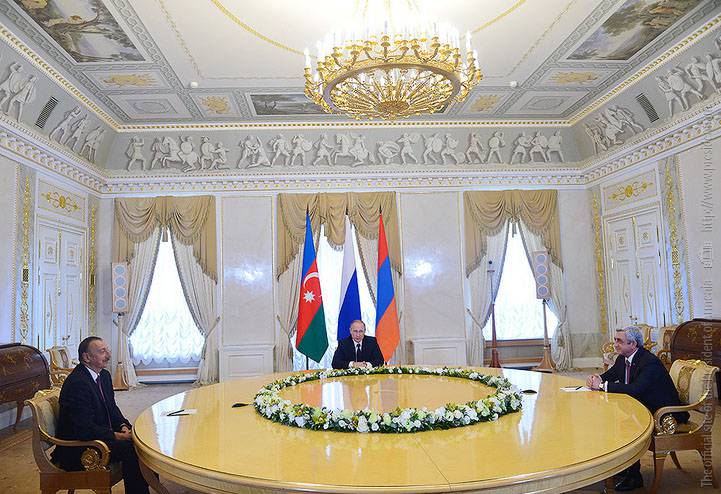 The fact that the meeting in a trilateral format began very warmly attracted attention. The presidents of Azerbaijan and Armenia, despite the previous meeting, were quite tough rhetoric, found the strength to smile at each other and shake hands.

In Nagorno-Karabakh, they hope that the meeting will be constructive and will be the embodiment of the opportunity to reach important agreements that will contribute to the end of a clearly protracted conflict. It is noted that in St. Petersburg the possibility is being discussed of agreeing on the implementation of monitoring along the contact line of the parties and on the mechanism for investigating possible incidents.