22 2016 June
12
My breeze, my love and the raft, my old raft,
trust me, fishing happiness on the wave is waiting for us,
hurry, my old raft ...
Fly to your favorite breeze, fly,
Tell Mary I'm on my way again!
(one of the translations of the Fishermen’s March from the film “Generals of the Sand Pits”)

After the publication of the “Morty… raft” material, some VO readers asked me to continue the theme of combat rafts, and it turned out that there was information on this topic, but the role of rafts in battles was mostly secondary (except for mortar rafts in the USA). Assyrians made rafts of waterskins and even chariots were shipped across the rivers to them. In India, they made rafts of clay pots and jugs, turned them upside down, tied them together with bamboo poles, and in this form they floated to ... a bazaar to sell there! The Tamils ​​floated on rafts, which were called kattu-maram, which meant "tied logs", and this name was transferred to a catamaran. It is known that the Incas had such large balsa rafts that they transported their troops along the coast. Thor Heyerdahl crossed even the Pacific Ocean on a replica of one such raft, but that was probably all that the raft could do. 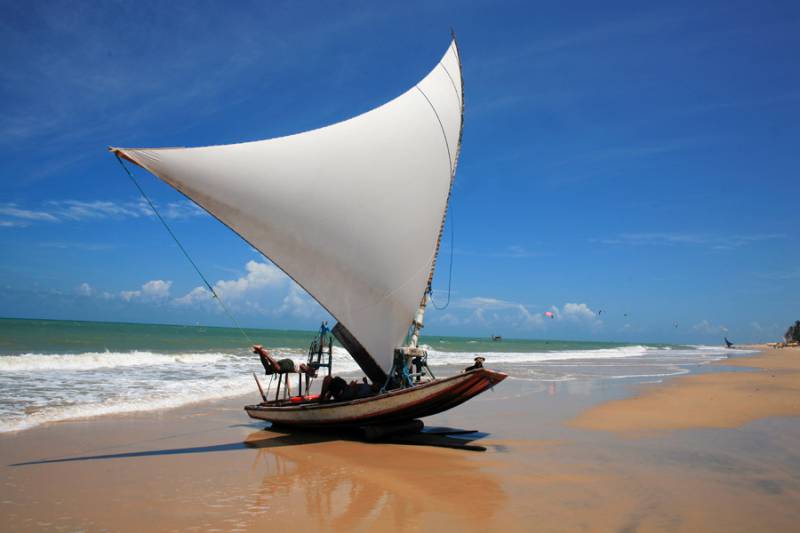 True, there is a case when a raft, or rather, a song about it, was used in the ideological war against the West, that is, it served as a kind of “ideological weapons". And it was that when the film “Generals of Sand Pits” was shot on the USSR screens in 1974, filmed by Captain of the Sand (1937) by American director Hall Bartlett, by Jorge Amadou, there was one very characteristic song. In the US, the film did not receive this recognition, but in the USSR it became just a cult, and the song just really liked the song, although nobody knew its words (sang in Portuguese). “Generalov” was shown in the competition program of the International Moscow Film Festival 1971, where they received an award, and the film appeared in wide distribution three years later, and Komsomolskaya Pravda called it the best foreign film of the year. And here we have turned a song in Portuguese into “A song about a homeless boy”: “I started life in the slums of the city ...” No one says that this song is bad or that it is “not a topic”. Just ... the text of the song from the movie is completely different! In fact, it was called the Fishermen’s March, and the words were:

"My genre will go to sea,
I will work, my love,
if it pleases God, when I come back from the sea,
I'll bring a good catch.
My comrades will be back too
and we give thanks to God in heaven. "

This is a literal translation, but there is a more beautiful - literary. But be that as it may, it is all about the raft - the zhangade - a very peculiar example of the folk art of the people of Brazil. The raft is very light, made of balsa. Equipped with a retractable keel. Therefore, it can even maneuver against the wind, but if you already fell from it into the water, then you can immediately consider yourself a dead man. No swimmer will catch up with him, so the zhanagada is light on the go, especially in a good wind!

By the way, the great Jules Verne also decided to pay tribute to the zhangade and immortalized its name in the novel “Zhangada. Eight hundred leagues on the Amazon. " But only his raft is not at all like a raft of coastal Brazilian fishermen. By the way, the novel was filmed "The Secret of Joao Corral" (1959), which in my childhood I looked like something quite exciting. 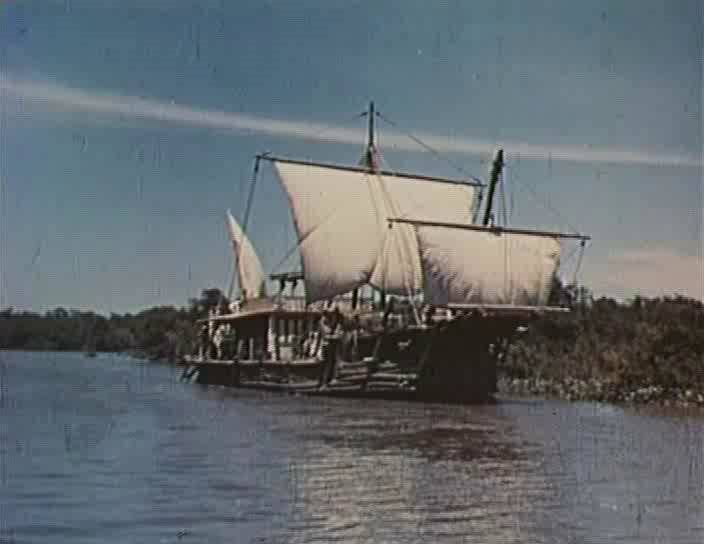 Zhangada from the movie "The Secret of Joao Corral."

Yes, but what does all this have to do with the military theme? Yes, the most direct, as it turns out. But again, it will have to start from afar, namely with the Civil War in Russia and not just in Russia, but in the water area of ​​the Caspian Sea. There it was decided to try to hang the torpedoes under ... fishing sailboats "Rybnitsa" and drown the White Guard ships with an unexpected blow. Torpedo should be installed under the bottom and from close range to release on the target. They armed three torpedoes with torpedoes, and only one went into the sea. Rybnitsa, with the Red crew in disguise as a sailor, approached the ships of white standing on the roadstead, but was stopped for inspection. They did not find anything suspicious, and the white officer has already authorized the departure. But then the boy, taken into the crew for averting his eyes, had the folly to ask: “Why didn’t let a mine go?”, And the whites heard him. The ship was thoroughly searched and a torpedo was found under the keel. After that, the “fishermen” were sent to counterintelligence, where they were interrogated and hanged, and the fool-boy was otporoli and released. 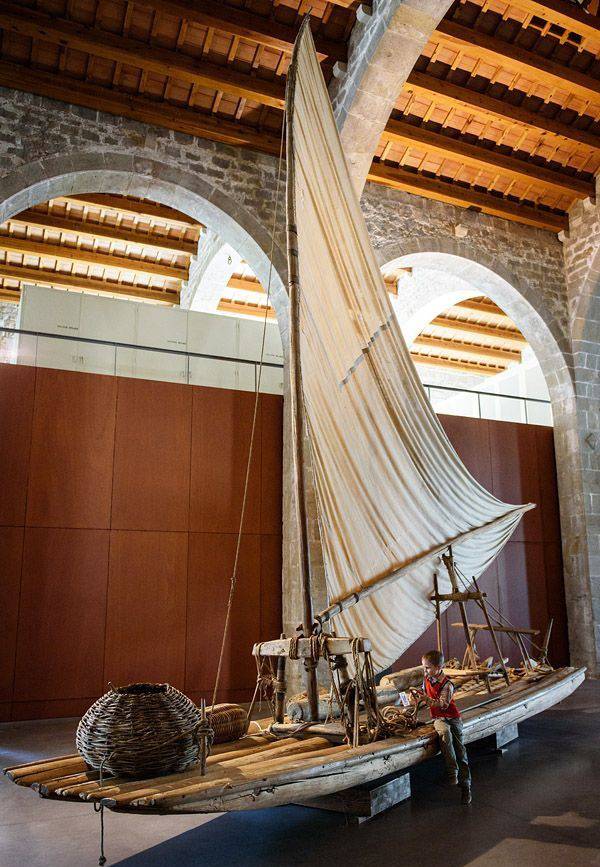 Jangada from the Maritime Museum in Barcelona.

And although this project was not crowned with success, the idea of ​​a covert strike from a disguised vessel against an enemy is not a bad idea in itself. True, international maritime law prohibits such a disguise, that is, from his point of view, the same, for example, trap vessels, which were widely used both during the First World War and in the second, the “thing” is completely illegal. In accordance with it, it is impossible, say, to disguise a missile carrier under a container ship, although technically there is nothing difficult about this.

However, for sabotage actions ... such an experience is “the very thing” that is needed, and here it would have been possible to recall the zhangad. The fact is that these light sailing rafts can go very far from the coast. In the morning the wind blows from the shore and the gangads go into the sea. Closer to the night the wind changes, and the rafts rush home with their catch. So it is possible to meet the gangad from the coast very far, so far that the coast itself will not be visible. And if so, then it can be quite close to the warships of different powers and ... why in this case not to use the Zhangad for some kind of "special operation". Well, you can equip it not with a torpedo, no, because the torpedo is noisy, which means, one way or another, it unmasks the raft that launched it, and ... with a self-guided gravity bomb capable of turning this high-speed fishery vehicle into a truly formidable weapon.

By its form, this weapon may well resemble exactly a bomb with developed steering surfaces in the rear part. You can attach it to the raft using ordinary ropes, so in the case of a search, to find at least something reprehensible on it will be impossible, well, and it is activated mechanically - pulled the cable and ... everything!

Well, and it is called gravitational because there are no engines in it, nothing that rustles, and it moves solely due to gravity! So, we saw an enemy aircraft carrier not far from our raft and, pointing the nose of our gangada on it and activating a bomb, dropped it from our “bomb raft”. Carried away by its own weight, the bomb began to sink and at the same time began to accelerate.

At a certain depth, the hydrostat will have to translate the rudders into a position whereby the bomb will sink already “at an angle”, that is, it will begin to move towards the ship, plunging deeper and deeper. When it reaches the maximum depth, the same hydrostat will release it from the load, so that the bomb will gain positive buoyancy and rush to the surface. But shifting the rudders controlled by the homing bomb system will keep it on course, leading to the goal. Its speed will increase all the time, so that it will be able to catch up with a rather speedy target. Moreover, to catch up "silently", because no "engines" work on it, which means that there are no characteristic noises that can alert the "hearing" of the enemy ship.

As for the homing system, it can be of a very different type, work on the magnetic field of the ship, and on the shadow that it casts from the surface, and direct the bomb at the sound of screws. Even a television control system on a cable with a length of about five kilometers, and that can be used on this underwater projectile, because there is nothing on it except for the charge of explosives and the control system, which means that you can also place a cable reel on it. Well, in the case of danger, the dashboard control panel can be simply drowned. 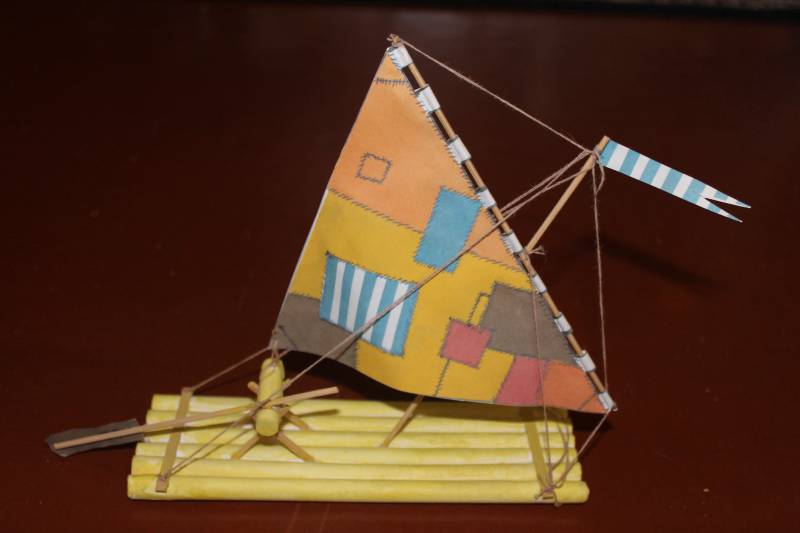 This gengada is a model of paper and sticks for kebabs. Made in 4-ohm class in the classroom and labor ... why such models in the classroom do not do? Of course, you don’t need to tell the children about the “bomb”, but why not just talk about how brave zhangadeiro go to the sea to them and fish to feed their family? The technology is such that it allows you to get the finished model in just one lesson. And even those children whose hands grow from “lower back”, in general, can make this model at a sufficient level. Besides, she also swims! Thus, it is also ... "weapon", because it makes our children smarter, and the clever will always win the stupid!

Finally, on the very last leg of the way up, the bomb is actively “working” with the rudders in order to be exactly under the ship. Then comes a blow and an explosion! A hole arises in the most dangerous place - directly on the bottom, water fills the hole with a fountain, an extremely dangerous situation arises on board, well, and the raft that dropped the bomb continues its way as if nothing has happened: is he and then? You never know why the explosions occur on board warships! 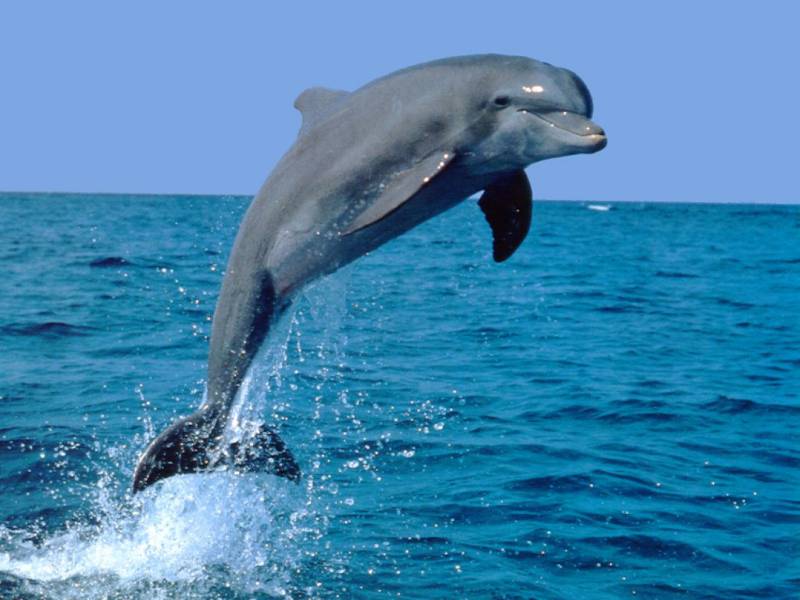 Another "silent weapon". However, he should be able to direct him to the target, he should be cared for, fed, healed ... And then he went out to sea on a raft and ... balls-xx!

It’s clear that this weapon is not for every day, but just in case, something like dolphins-demolitionists from Robert Merle’s novel “The Intelligent Animal”. But it was there that the “ends” of how it all happened were managed to be found, but in the end it would end with a happy end. With a gravitational bomb on a raft or, say, on board a fishing trout, everything will be completely different. well and flotilla such “little ships” can easily drown an entire carrier-based formation, dropping on it not one such, but many trackless shells. So ... this Brazilian fleet raft is not so harmless, is it?