The State Department again "combed", and Russia does not surrender to Syria 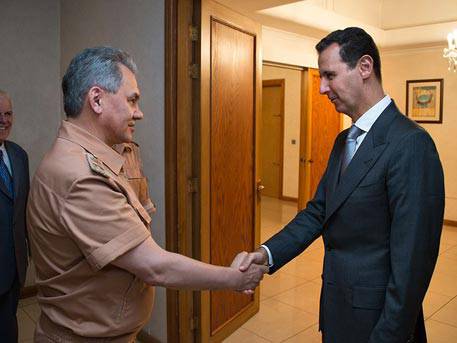 The Syrian war has been going on for more than five years, and during this time voices of “hawks” have been heard repeatedly from Washington. The essence of their calls is the same: “bomb into the stone age”. Previously, loud statements required noisy informational pretexts: such as a massacre in the village of Hula or accusation of the Syrian leadership in the use of chemical weapons. This time there was no high-profile reason, but at 51 an employee of the US State Department again something “itched.”

The “itch” is clear: so much time has passed, but the recalcitrant Syria cannot be brought to its knees. Undermine its economy - yes. Kill hundreds of thousands of people - yes. Destroy the beautiful cities - yes. But to overthrow the legitimate authority headed by the legitimate president is not. Neither by hook nor by crook. Neither sanctions nor threats. Neither by terrorists, nor by political provocations.

According to The Wall Street Journal, an 51 employee of the US Department of State made an unequivocal appeal to US President Barack Obama: to immediately start a war against Syria.

Of course, the US war against the Syrian Arab Republic is in full swing. American aviation flies over the Syrian cities for a long time, and in the country itself there is already a whole army of "instructors". The country's infrastructure is systematically destroyed. But all this is covered by the struggle with the Islamic State. However, the United States is limited by the scope of this struggle and forced to comply with certain policies.

The appeal of the State Department staff also says that you need to deliver targeted attacks against the Syrian army and government. Damascus is accused of "breaking the truce."

For such calls, supporters of the tough anti-Syrian line surrounded by Obama no longer need a loud pretext, like another accusation of any falsified massacre. It is enough to blame abstractly for breaking the truce - and you can “drive a wave” to “anti-theft into the stone age”.

“Bombing the Stone Age” was the very phrase American politicians used seventeen years ago when the US and NATO bombs tormented the bloody Yugoslavia ... Then the bombing did not break the country - a year and a half after the aggression Belgrade had to be finished with a coup d'état.

Today at the forefront is another country. Which is bleeding to death, but holding on. And that also dream to finish.

However, so far, Barack Obama says he does not intend to move to direct armed aggression against Syria. However, it is difficult to exclude the fact that before the upcoming elections (after which Obama will have to give up the post) he will be tempted to end his rule with any effective demarche.

It is no secret that the Democratic candidate Hillary Clinton takes a much tougher line on the Syrian issue than her party mate Obama. It was her husband who “entered into the stone age” Serbia. It was she who insisted on aggression against Libya in 2011. It was she who shouted “Wow” over the tortured body of Libyan leader Muammar Al-Gaddafi. And under Obama, when Hillary was the US Secretary of State, she actively lobbied for direct aggression against “stubborn” Damascus.

As is evident from the appeal, those circles in Washington that want war with Syria are strong and do not intend to give up. They hope to gain a second wind if Hillary Clinton wins.

State Department officials calling for a war crime against a sovereign state in the Middle East, argue their position that the alleged Syrian leadership ... strengthens the position of ISIL. In their address, they stated that many groups of the “moderate Syrian opposition” do not want to join the US coalition because they would like Washington to fight Bashar al-Assad, and not ISIS.

Thus, supporters of the war with Syria are forced to admit that the militants of this very “moderate opposition”, for which Washington is so advocating, are much closer to ISIS than official Damascus.

But isn’t it a revelation of the supposedly “moderate opposition”? Not an involuntary admission that this "opposition" is ready to stand in one trench with those who cut throats, including American citizens?

It is not yet clear how supporters of the war against the Syrian president hope to circumvent the main problem. Namely - the fact that now they will have to fight not only with Damascus, but with much more powerful forces, including those with nuclear weapon.

Apparently, this problem is still understood by Barack Obama: no wonder his reaction is very restrained so far. But the statement of the State Department's hawks is designed for the future, with the hope of winning Clinton (after all, as is well known, the other leading presidential candidate, Donald Trump, is in favor of cooperation with Russia on the Syrian issue).

As for Moscow, its reaction is expressed in the words of the official representative of the Foreign Ministry, Maria Zakharova: “I would like to hope that the mistakes that were made, including the United States and all illegal coalitions in Iraq and elsewhere, forcibly changing power by force will not be forgotten. ”

But an even more revealing reaction was the visit of Russian Defense Minister Sergei Shoigu to Damascus.

Shoigu inspected the Russian airbase Khmeimim and met with Syrian President Bashar al-Assad. According to dry reports by Syrian and Russian media, during the meeting issues of military cooperation between the two countries in the fight against terrorism were discussed.

Whatever the negotiations with the legitimate head of the Syrian state, one thing is clear - this visit showed that Russia is not going to give up Syria for “anti-burglary”.

In the meantime, sorrowful news comes from Syria. So, June 15 in the province of Homs is one of the Russian servicemen, Kaliningradian Andrei Timoshenkov, guarded the Russian humanitarian convoy. A suicide bomber in a mined car tried to break through to the place where it was planned to issue humanitarian aid to civilians. Andrei stopped the car, opened fire on a gangster who wanted to kill a lot of innocent people. The bomber was forced to blow up his car not where he planned. Unfortunately, Andrey Timoshenkov for his heroic act paid with his life. During the explosion, he was seriously injured and failed to save him. Two days later, a soldier died on the territory of the Khmeimim base.

In addition, several days before, another Russian soldier was seriously wounded during the shelling by militants of the city of Aleppo - Junior Sergeant Mikhail Shirokoyas, from the Amur Region. He accompanied a column of the Reconciliation Center when a fragment of a shell hit him. The Russian was immediately transported to Moscow, but could not be saved ...

Washington says it does not understand Russia's goals in Syria. But our guys are rescuing civilians there, stopping terrorists' mined cars, as much as they contribute to reconciliation. The Russian military are in an Arab state with the full support of the leadership of Syria. The United States does not have such support, and their presence in the SAR is absolutely illegal. Yes, and they have one goal - to try to further stir up the war and "bomb into the stone age."