20 2016 June
45
The Tu-22M aircraft were the foremost machines of their time, the designs implemented during their design were then used in the USSR to create both combat and civil aircraft. For the first time in the Soviet Union, the aircraft received an effective and complex set of interconnected digital and analog systems of aviation and radio-electronic equipment. The first experienced missile-carrying bomber Tu-22М3 made the first flight of 20 June 1977. After the flight test program was completed in the 1978, the aircraft was put into serial production, with the aircraft being in final form adopted only in March of the 1989. The last Tu-22М3 aircraft was built in 1993 year (due to non-payment by the customer, this machine became a monument installed near the Kazan Aviation Plant). A total of 268 aircraft of this type were assembled at KAPO-Kazan Aviation Production Association.


The Tu-22М3 (45-03 product), according to NATO Backfire codification (“counter firing”, a method of extinguishing forest and steppe fires), is a Soviet, and then a Russian long-range, supersonic bomber-bomber with a variable wing geometry. The Tu-22М3 bomber was built in a normal aerodynamic configuration with a low-mounted variable geometry wing. The airframe of the aircraft was made mainly of light aluminum alloys.

The fuselage of the aircraft is a semi-monocoque type, in its lower part there is a radar compartment, which is closed by a radio-transparent fairing. The front of the aircraft fuselage has a cross section close to the oval. In the central part of the fuselage there is a weapons compartment, the design of the valves of which allows one X-22 guided missile to be suspended in a semi-submerged position. The crew of the long-range bomber is located in a sealed cockpit, which consists of two compartments: in the front compartment are the crew commander and assistant commander, located next to each other, in the second compartment are also located navigator navigator and navigator-operator. 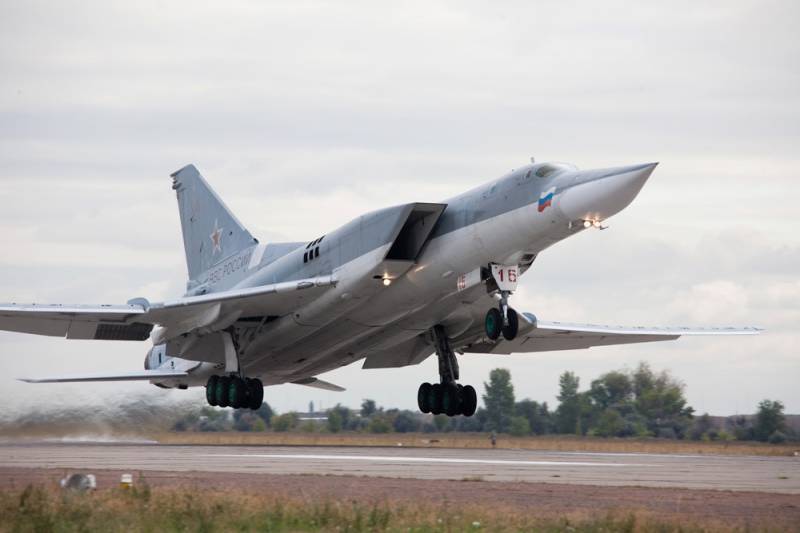 A long-range bomber wing consists of a fixed part and swivel arms (which can be installed in a position with a sweep angle of 20, 30 or 65 degrees). On the toe of the consoles, slats were mounted throughout the span. On the rear edge there are elevons and three-section flaps, in front of which three-section interceptors were placed. In the wing of the aircraft were located fuel tanks.

The landing gear of the Tu-22М3 tri-axle bomber. The main landing gear, equipped with six-wheeled carts, in flight are retracted into the wing and fuselage of the aircraft by turning it in span. The two-wheeled nose landing gear retracts into the bomber's fuselage by turning back. In the landing gear, tubeless tires are used. To reduce the distance of the aircraft when landing with a large weight or in the case of landing on a limited length of the runway, the parachute-braking system PTK-45, which includes two cruciform parachutes, is used. Containers with them are located in the bottom of the bomber between the two engines.

The power plant of the aircraft consists of two turbojet dual-circuit engines with an afterburner NK-25 (thrust on afterburner - 2x25000 kgf), which were created by specialists of OKB N. D. Kuznetsov. The aviation the engine is a further development of the turbojet engine NK-144, which was specially created for the supersonic passenger airliner Tu-144. The modification of the Tu-22M3 bomber was originally created specifically for this engine. 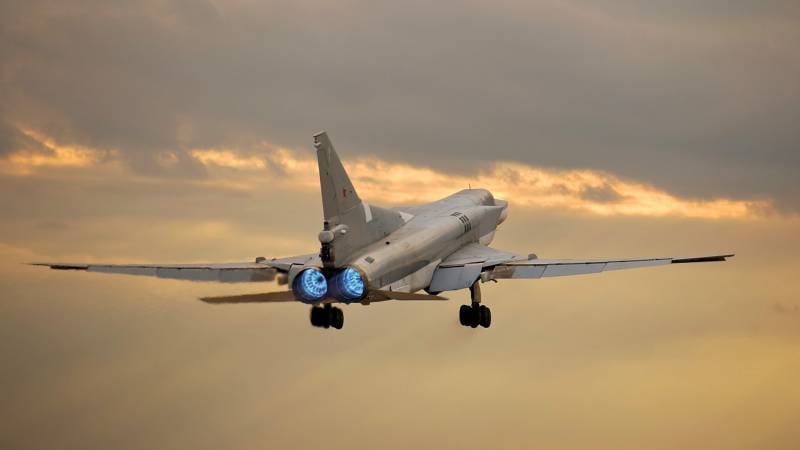 The Tu-22М3, unlike its predecessors, had a new, bucket-type air intake with a horizontal wedge, which allowed aircraft engines to have more comfortable working conditions. Also, the designers managed to improve the aerodynamics of the bomber by making the nose section of the aircraft’s elongated 0,8 meter sharper. In addition, the appendix of the fuel receiver bar of the aircraft refueling system in the air, which was dismantled on all Tu-22M airplanes according to the SALT-2 contract protocol, disappeared from the bomber (however, the first mass production bomber-bombers of the Tu-22-3 barreled fuel receiver as well. install, it was removed later, after the transfer of combat aircraft in the combat units).

The designers of the aircraft also somewhat “squeezed” the tail end of the machine, in which instead of the two they installed one double-barreled 23-mm cannon installation GSH-23 (the rate of fire to 4000 rds / min). The maximum sweep angle of a long-range bomber wing was increased from 60 to 65 degrees to achieve higher flight speeds. At the same time, the specialists managed to alleviate a number of force elements of the airframe design, in order to reduce the weight, the designers refused to move the middle pair of wheels of the main landing gear (the practice of operating the aircraft showed that using Tu-22M class bombers from unpaved runways is quite a dubious question). Along with this, the wing design of the aircraft was somewhat strengthened (taking into account the accumulated operating experience of the Tu-22M of early modifications). Also, the long-range bomber was equipped with an electric system of alternating current of stable frequency, which included hydromechanical drive-generators of constant speed (this solution made it possible to abandon cumbersome electric machine converters). Batteries and contactless generators of new design appeared in the DC system of the aircraft. The air-conditioning system has become more efficient and compact, the layout of the bomber’s cockpit has been improved.

The Tu-22М3 long-range bomber can carry X-22 type air-to-surface air registers with various equipment for combat units and guidance systems. These missiles are placed on the girder holders inside the bomb compartment, as well as on two points of the external suspension under the wing of the aircraft. It is also possible to complete the rocket armament in the version up to 10 of hypersonic air-to-surface X-15 UR installed on the intra-body multi-position ejection installation and on the 4-x external wing ejection installations. On the beam and cluster holders located inside the bomb compartment and on the external suspension assemblies, 100, 250, 500, 1500 and 3000 kg bombs can be suspended, as well as aircraft mines in the sizes of 500-1500 caliber bombs. The maximum bomb load of the aircraft is 24 000 kg. To protect the rear hemisphere of the bomber from enemy fighter attacks, it was equipped with cannon armament, the GS-23 cannon, as well as the AR-4KM radar shooting sight, the TP-1KM thermal imaging sight and the WB-157AXNX computational unit 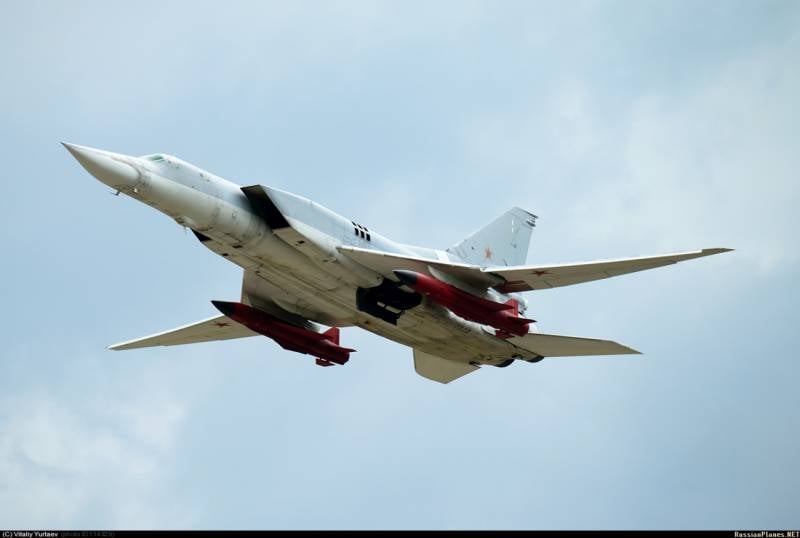 According to the 2016, the X-NUMX of the Tu-63М22 and Tu-3МР (reconnaissance aircraft) remain in service with the VKS of Russia. Before 22, KAPO plans to modernize the 2020 of the Tu-30М22 rocket-carrier bombers by installing a new element base on them, as well as expanding the range of weapons used, including models of modern high-precision weapons. In addition, in Kazan it is planned to carry out a complex of works on the extension of the service life of the aircraft to 40 years. Detailed information on the work carried out as part of the modernization program is closed.

Tu-22М3 airplanes were limitedly used during the final stage of the war in Afghanistan in 1988-1989, where they made powerful bombing strikes against enemy troop concentrations, including using high-power FAB-3000 bombs. They were also used at the early stage of the First War in Chechnya. During the Chechen campaign, Tu-22М3 bombers were limitedly used to illuminate the work of Russian attack aircraft by consistently dropping OSAB type bombs.

In August 2008, long-range Tu-22М3 bombers launched rocket-bombing attacks on ammunition depots of the Georgian army, bases, airfields, and concentrations of Georgian troops in the Kodori Gorge. According to official data, one Tu-22М3 aircraft was shot down by the Georgian air defense system at an altitude of approximately 6 thousand meters. Most likely, the plane was shot down by a Buk-M1 missile system. The downed aircraft was piloted by a crew from the 52 10th Heavy Bomber Aviation Regiment based in Shaykovka. The plane was shot down, returning from the departure to the bombing of the base of one of the Georgian infantry brigades, two of the four crew members were killed, one was missing, one was captured, and 19 August 2008 was returned to Russia. After this loss, the Russian Air Force did not use long-range aircraft until the end of the conflict. 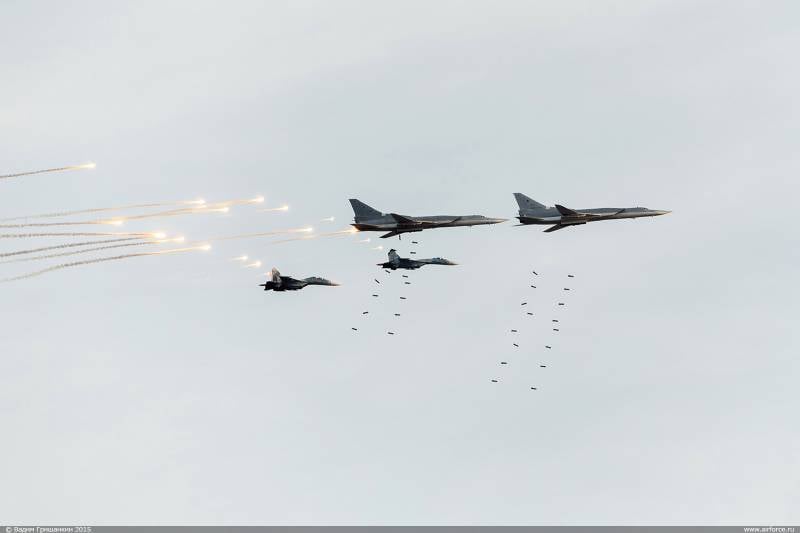 Starting in November 17 2015, Tu-22М3 aircraft began to be used as part of the Russian military operation in Syria. On this day, bomb strikes against objects of the IG terrorist organization located in the provinces of Rakka and Dair-ez-Zor caused 12 long-range Tu-22М3 bomber. The reinforced squadron of Tu-22М3 long-range bombers struck, taking off from the Mozdok airfield. During the execution of attacks on terrorists in Syria for one flight, which lasted 5 hours 20 minutes, the bombers covered the distance of 4510 kilometers, the press service of the Russian Defense Ministry reported that day. Thus, the aircraft again proved its combat effectiveness and usefulness, remaining one of the trump cards of Russian long-range aviation.

Ctrl Enter
Noticed oshЫbku Highlight text and press. Ctrl + Enter
We are
An-12 in AfghanistanAwesome thunder (the fastest bomber in the world, Tu-22M3)
Military Reviewin Yandex News
Military Reviewin Google News
45 comments
Information
Dear reader, to leave comments on the publication, you must sign in.