Shoigu compared the protests with the events of 93. 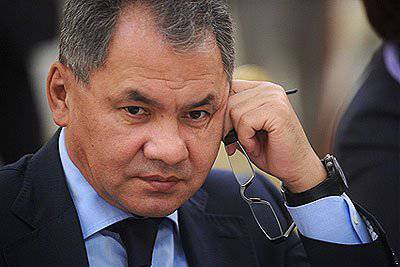 Emergencies Minister Sergei Shoigu expressed fears that protests could put the country on the brink of civil war, but he supported protesters for "respect for yourself." He also expressed confidence that Putin is interested in fair elections and will inevitably win them.

“I support all those who come out demanding respect for themselves,” the minister said during a press conference, commenting on opposition rallies. At the same time, he expressed concerns about escalating the situation. "I am very disturbed and alarmed by the escalation of extremist relations ... Not to allow chaos is the direct responsibility of the authorities. I am absolutely sure that people do not want chaos, and I am sure that they will not allow it," he stressed.

Shoigu recalled the events of the fall of 1993, when the country was on the verge of civil war because of the conflict between President Boris Yeltsin and the Supreme Council, which ended in the shooting of the White House. “God forbid we don’t reach the events that happened then in September - October ... I don’t want a repetition and I will do everything to prevent this from happening,” the Emergencies Minister said.

He recalled one of the leaders of United Russia and the fact that last year among the materials published on the WikiLeaks website were the conversations of the Russian opposition with a representative of the US Department of State. In particular, Shoigu pointed out, opposition representatives recognized that Putin could lose power only in the event of a major emergency.

The Minister of Emergency Situations, according to his confession, is concerned that any protest action inevitably turns into an anti-Putin one. At the same time, he stressed that he unconditionally supports the current prime minister, who during the presidency did not allow for himself "any changes in the Constitution."

In conclusion, Shoigu expressed confidence that Putin is interested in holding fair presidential elections and will inevitably win them. “It was Putin who said that it was necessary to put cameras on the sections, it was he himself who was interested in absolutely fair elections, so that the victory was clear,” the minister recalled. "I can repeat that we had different leaders, different times, there were times on the verge of civil war, trucks drove around the city, as in revolutionary St. Petersburg, so I am absolutely sure that the majority will support Vladimir Vladimirovich Putin. There is no doubt about that, I do not want a repetition of chaos, "he added.

Recall that at the joint opposition rally held on December 10 on Bolotnaya Square and December 24 on Sakharov Avenue, tens of thousands of people came. The main demands of the protesters were the cancellation of the results of elections to the State Duma and the resignation of Prime Minister Vladimir Putin.

After the rally on Sakharov Avenue, spokesman for the head of government, Dmitry Peskov, said that Putin was still supported by the majority. But he assured that the protesters' opinion was heard. We treat him with respect. “The people who took to the streets are an important part of society, but they are in the minority,” said Sands.

In turn, presidential aide Arkady Dvorkovich called the rallies "a normal expression of civic position" and noted that he sympathized with those who had gathered for a demonstration rather than those who spoke before them.