Army, aviation and fleet of Ecuador. What are the armed forces of a Latin American country

20 2016 June
18
In recent years, Ecuador has become one of the few Latin American countries that openly challenge American policy on the continent. The president of the country since 2006 is the socialist Rafael Correa. Even when he was his country's finance minister, he promised to expel all foreign oil companies from Ecuador and refuse to repay foreign debt. These slogans of Correa turned him into the main enemy of the Ecuadorian oligarchy and the pro-American political elite. But on the other hand, they guaranteed Correa the support of the majority of the country's population — Indian peasants, workers, and the unemployed. As a result, Correa won the presidential election over the richest citizen of Ecuador, Alfredo Noboa. Today, Correa is friends with the leaders of Cuba and Venezuela and criticizes American imperialism and its satellites. Such a bold policy is difficult to carry out without the support of the armed forces, especially since, as in other Latin American countries, the armed forces have always played a huge role in the political life of Ecuador. For almost two centuries of independence of Ecuador, military coups took place in the country several times, some generals and colonels succeeded others in power. 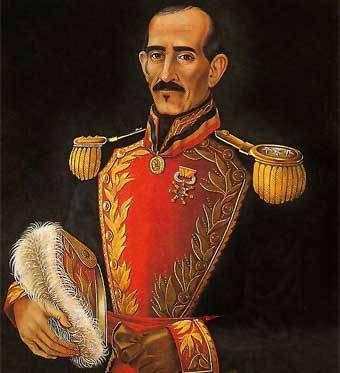 History Ecuadorian armed forces are inextricably linked with the struggle for national liberation, against the Spanish colonialists. The first revolution took place in the city of Quito (now the capital of Ecuador) in August 1809. Ecuador finally gained independence from Spain in 1822, when the Spanish troops were defeated by the army of General Simon Bolivar. In 1822-1830 the territory of Ecuador under the name “Quito Region” was part of Greater Colombia, and in 1830, the region seceded from this state and declared independence as a state of Ecuador. The first president of Ecuador was General Juan José Flores (1801-1864), who became the actual founder of the armed forces of an independent state (especially since, after resigning from the post of president, General Flores in 1835-1839. Served as commander-in-chief of the Ecuadorian army, and in 1839 d. again took the presidency for six years). However, the further political history of Ecuador in the XIX - early XX centuries. evolved not very well. Often the country was actually in a state of chaos. Several times (in 1859, 1941, 1981, 1995), Ecuador fought with neighboring Peru because of territorial disputes. Naturally, a stronger Peru defeated the armed forces of Ecuador.

The presence of constant disagreements with neighboring Peru necessitated a rather large army by the standards of a small Ecuador. In 1978, the Ecuadorian armed forces already had 31,5 thousand troops. The ground forces, then numbering 20 thousand, included 6 infantry, 2 border, 1 armored and 1 special brigade, 3 engineering battalion and 1 military police battalion. The Air Force then numbered 5,5 thousand people and were armed with 12 fighters, 3 transport aircraft and several fighter-bombers and helicopters. The Navy (6 numbering thousands) included 2 submarines, 2 frigate, 1 military transport ship, 20 patrol boats, 2 rocket and 3 torpedo boats, and the 1 battalion of marines. In the following decade, the number of personnel and the number of units and subunits in the Ecuadorian armed forces only increased. 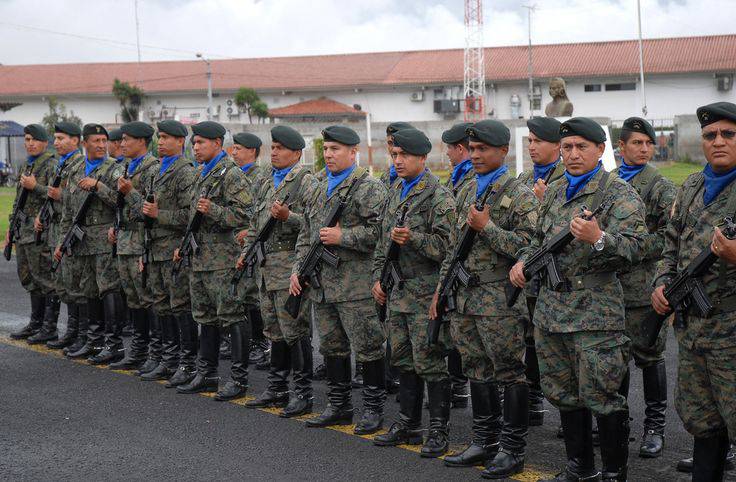 By 1989, the number of Ecuadorian army consisted of 40 000 people. In 2003, the armed forces of the country were divided into five military commands, including four commands uniting the forces stationed in continental Ecuador — the commands of Norte, Cuenca, Guayas, and Center. The fifth command, Morskoye, included forces stationed in the Galapagos Islands. Each land command corresponds to an army division stationed in its territory. The basis of the ground forces of Ecuador has a brigade-battalion structure. Most of the units are infantry battalions and special forces battalions, trained in the jungle - against the partisans, which for a long time were a serious "headache" of the government of the country. 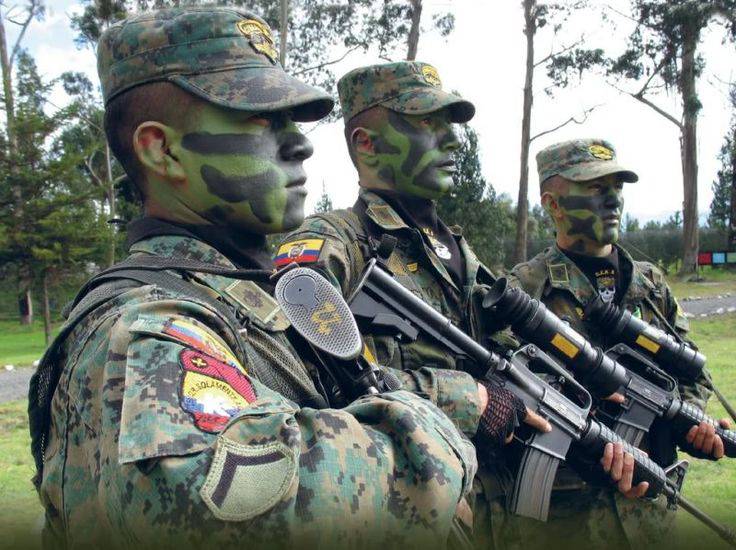 In addition to these compounds, the army is also part of the army of Ecuador aviation, which includes three aviation groups - the 43rd, 44th and 45th, as well as the Army Aviation School "Captain Fernando Vascones". In 2009, the restructuring plan was launched in the armed forces of Ecuador, which was supposed to be completed by 2011. But there is no reliable information on how it was completed and what it was contained in - the command of the armed forces of Ecuador imposes restrictions on the distribution of such information.

The Ecuadorian Air Force was established on October 27 1920. However, long before the creation of the Air Force, the first pilots appeared in the country and training and then combat flights of aircraft began. As a result of the next Peruvian-Ecuadorian crisis, in 1910, members of the sports club de Tiro in Guayaquil decided to start learning how to fly. An aviation club was created, and its Italian-born Guayaquil resident Cosme Rennell Barbatto was sent to 1912 to his historic homeland in Italy to train as a pilot. 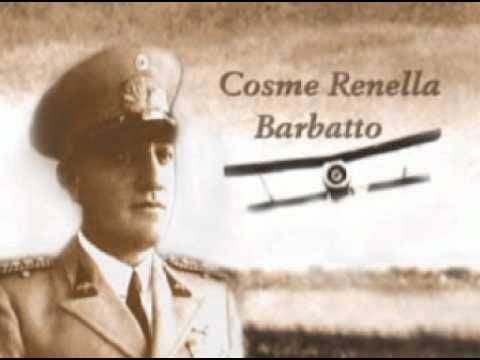 In 1915, Cosme Rennell returned to Europe again and took part in World War I as a pilot, made 152 sorties and conducted 18 victorious battles. After Cosme Rennell returned from Europe, many Ecuadorian pilots decided to follow his example. A preferential group of Ecuadorians was formed, which went to Italy to attend a training course at an aviation school in Turin. Thus began the history of the Ecuadorian military aircraft. Italian military instructors who opened an aviation school in Guayaquil were invited to the country. However, due to the financial problems of the country, the development of the air force was slow. By 1939, the Ecuadorian Air Force still served 60 people, including 10 officers, and numbered 30 aircraft. In 1940, in connection with the outbreak of World War II, the Italian military mission, which trained Ecuadorian pilots, was withdrawn. Since then, the United States of America began to provide military assistance to Ecuador in the development of its own air forces.

In 1940, during and after the conflict with Peru, the US military mission began supplying aircraft to Ecuador for the needs of the aviation school in Salinas. Further escalation of the combat power of the Ecuadorian Air Force took place in the 1950-e - 1960-e. and was associated with the need to increase the capacity of aviation in the context of the deployment of the partisan movement of left radicals throughout Latin America. In 1954, the Canberra B6 and 6 Meteor FR12 aircraft were delivered to the country. After their appearance, Ecuador gained its own tactical air force. In 9-1958 X-NUMX F-1960G fighters were delivered from the United States, which allowed the creation of a second jet squadron as part of the Ecuadorian Air Force. Ecuador's military transport aviation also began to provide commercial services to organizations and citizens wishing to visit deaf areas of the country, where getting by road was problematic. In 16 and 80 The Air Force of Ecuador participated in the air combat during the wars with Peru. 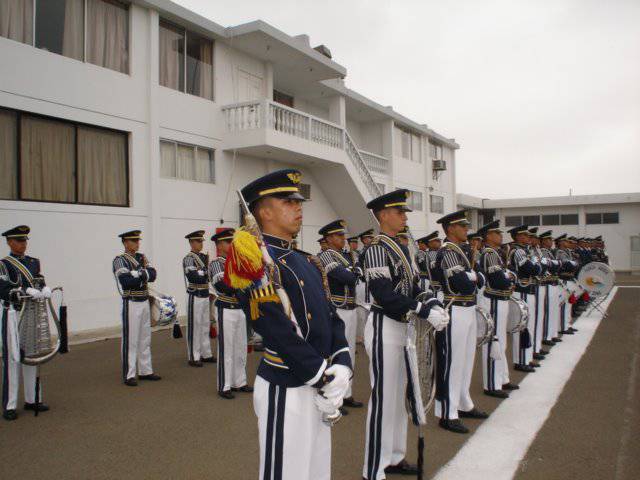 The composition of the naval fleet Ecuador includes the navy itself, naval aviation, coast guard, and marines. The history of the Navy of Ecuador began almost simultaneously with the history of the ground forces of the country - in 1823, when the formation of the Navy of Great Colombia began. In 1832, after Ecuador withdrew from Greater Colombia, the Ecuadorian Congress decided to establish the Maritime Department of Ecuador. However, Ecuador’s fleet was never strong either. Ecuadorians are proud of the episode of the Peruvian-Ecuadorian war of 1941, when the gunboat Calderon under the command of Rafael Moran Valverde collided with the Peruvian ship Admiral Villar. The Ecuadorian gunboat opened fire on Admiral Villar, but the Peruvian ship returned fire. The gunboat stepped back and left the chase without injuring, while the Peruvian ship received several injuries. However, the Peruvians themselves always denied the fact of damage to their ship by the Ecuadorian gunboat.

Currently in service with the Ecuadorian Navy there are: 2 submarines of the 209 type - Siri and Huancavika (both upgraded in 2008-2014), 2 of the frigate Eloy Alfaro and Moran Valverde, 6 of corvettes, The 3 rocket boats, the 4 auxiliary ship are the 2 transport ships, the tug and tanker, and the 1 training ship Guayas. 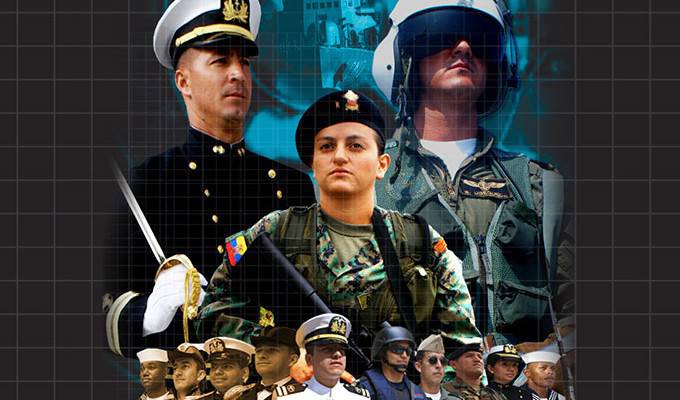 The Navy Coast Guard Corps was finally formed by 1980 to accomplish the tasks of ensuring the safety of maritime and river activity throughout the country. The objectives of the existence of the coast guard of Ecuador proclaimed internal security of the country, the protection of human life at sea and the protection of the environment. The number of Coast Guard Corps is about 250 officers and sailors. In service is the 30 large and 40 small patrol boats. In 2011, four 26,5-meter patrol vessels were ordered for the needs of the Ecuadorian Coast Guard Corps.

Earlier history than the coast guard of the country, has the Marine Corps of Ecuador. It was founded on November 12 of 1962 of the year and is a mobile and well-prepared compound of about 1700 officers and marines. The headquarters of the corps is located in Guayaquil. On the armament of the case are small weapon, 60mm and 81mm mortars, 106mm recoilless rifles, jeeps. At the same time, the obvious shortcomings of the Ecuadorian marines are the low landing and underwater potential, which creates certain obstacles to its use directly in the underwater and underwater operations, and not as an army special forces. The Ecuador Marine Corps consists of the security company headquarters in Guayaquil and the 5 Marine Corps battalions - Hambelli, San Eduardo, San Lorenzo, Haramijo and Esmeraldas. In addition, the Marine Corps School also operates.

Naturally, in Ecuador, as in other Latin American countries, there have always been problems with the political loyalty of a part of the military. For example, in 2010, some soldiers and policemen mutinied to overthrow President Rafael Correa. The formal reason for the speech was the dissatisfaction of the servicemen by cutting benefits and payments, but it is possible that the American special services played a role in provoking the conflict, for which the socialist president has long stood like a bone in the throat. Probably, the United States was counting on the overthrow of Correa. However, most of the armed forces remained loyal to the government and stifled the rebellion. In turn, the leaders of most Latin American countries expressed their support for Rafael Correa and welcomed the suppression of the rebellion.

Ctrl Enter
Noticed oshЫbku Highlight text and press. Ctrl + Enter
We are
Army "Isthmus". What are the armed forces of Central America"Rebellious Venezuelan Aviation." In memory of the commandant Hugo Chavez is dedicated
Military Reviewin Yandex News
Military Reviewin Google News
18 comments
Information
Dear reader, to leave comments on the publication, you must sign in.