From July 1942, the main serial modification of the Mitsubishi deck-based fighter Zero was the A6М3 model 32, which differed from the previous A6М2 mod. 21 installing a more powerful engine "Sakae-21" in 1130 horsepower. The plane received a non-folding wing with trimmed tips. The maximum speed of the fighter at an altitude of 6000 meters was 540 km per hour with a speed rating of 820 meters per minute. By replacing the power supply mechanism of guns, their ammunition was increased (from 60 to 100 projectiles per barrel).

According to its maneuverability and speed characteristics A6М3 mod. 32 is still superior to its main opponents: American fighter jets F4F-4 Wildcat, inferior to them in survivability and firepower (two 20-mm guns and two 7.7-mm machine guns against six 12.7-mm machine guns).

During the fighting for the island of Guadalcanal, Zero fighters had to operate from coastal airfields. To increase the flight range, we had to use suspended 45-liter tanks with fuel. The "Zero" А6М3 mod. 32 with their trimmed tips (with a decrease in the total area of ​​the wing) controllability has noticeably deteriorated. To eliminate this drawback, the wing was again returned to the rounded ends. The new modification received the name А6М3 mod. 22. 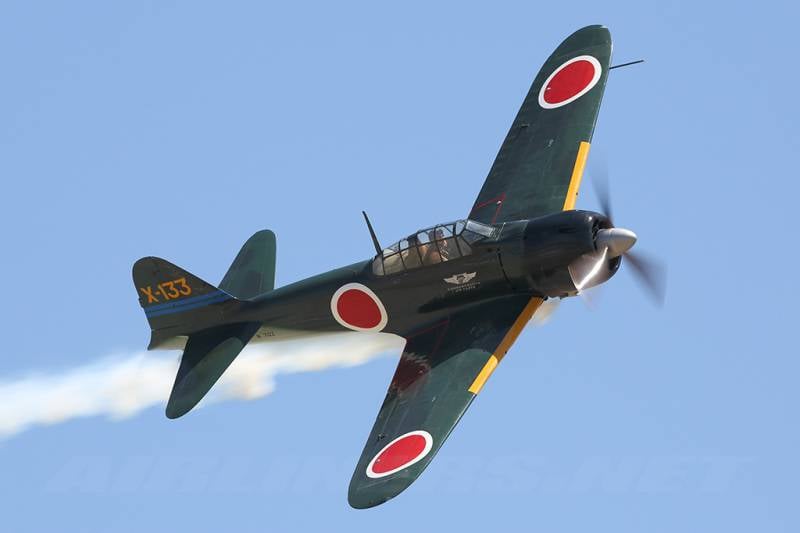 In February 1943, the fighting in Guadalcanal ended with the defeat of the Japanese. By this time, the Americans had new aircraft: this is also the grounding Fighter X-PUMNX "Lighting" (with a maximum speed of 38 km per hour and weapons from one 628-mm gun and four 20-mm machine guns), and deck-based fighters "Grumman" F12.7F -6 “Hellcat” (with better top speed: 3 vs. 605 km per hour and climb: 540 against 990 meters per minute). 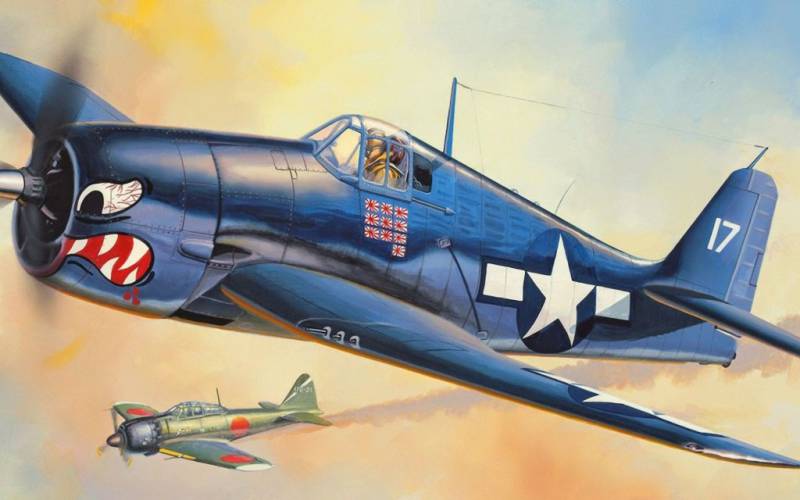 The American pilots leveled the only remaining advantage of the Zero in horizontal maneuverability by competent air combat using the tactic of “strike and exit”.

The adoption of the new Japanese carrier-based fighter, which would satisfy the new increased demands of the war in the air, was postponed for a number of reasons for an indefinite time. In these conditions, the only possibility remained before aircraft manufacturers: further improvement of the Zero fighter.

Not being able to install a new, more powerful engine on the Zero, the designers tried in every way to modernize the Sakae-21 available to them. Replacing the massive exhaust manifold common to all cylinders with separate for each pair of cylinders with lighter jet connections, it was possible to slightly increase the engine thrust and reduce its weight.

A new modification of the fighter called A6М5 model 52. The maximum speed of the aircraft increased to 565 km per hour at an altitude of 6000 meters. Increased and the rate of climb to 857 meters per minute. The reinforced non-folding wing with new rounded-end tips provided a higher dive speed. Armament fighter left unchanged. 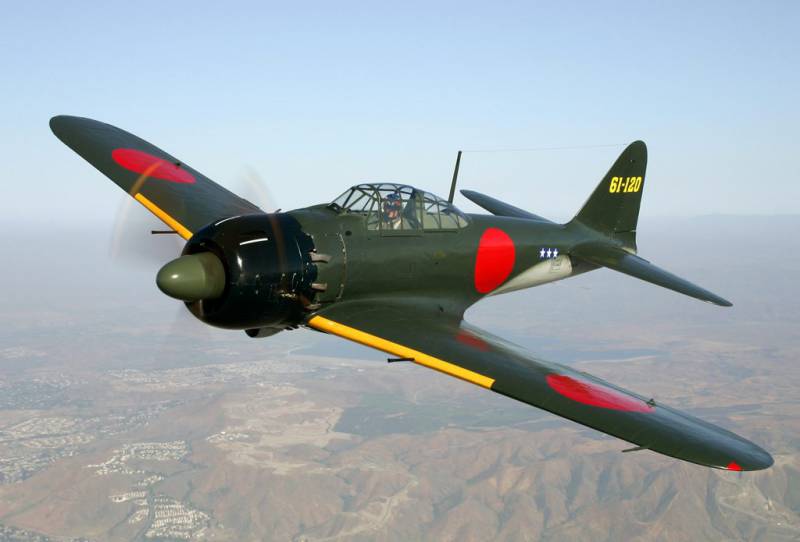 The series production of the A6М5 model 52 was launched in the autumn of 1943. From December on the model 52А again strengthened the wing and increased the ammunition 20-mm guns to 125 shells on the barrel.

In April, Mitsubishi launched the Zero A6М5 fighter model 52В with improved cockpit protection (frontal armored glass installed) and fire protection system (carbon dioxide cylinders). The right-hand 7.7-mm synchronous machine gun was replaced with a large-caliber 13.2-mm machine gun. Now you can mount additional fuel tanks under the wing with a larger capacity (150-l instead of 45-l). In the field workshops, if necessary, the ventral suspension assembly for the 330-l fuel tank was altered to be able to carry the 250-kg bombshell. 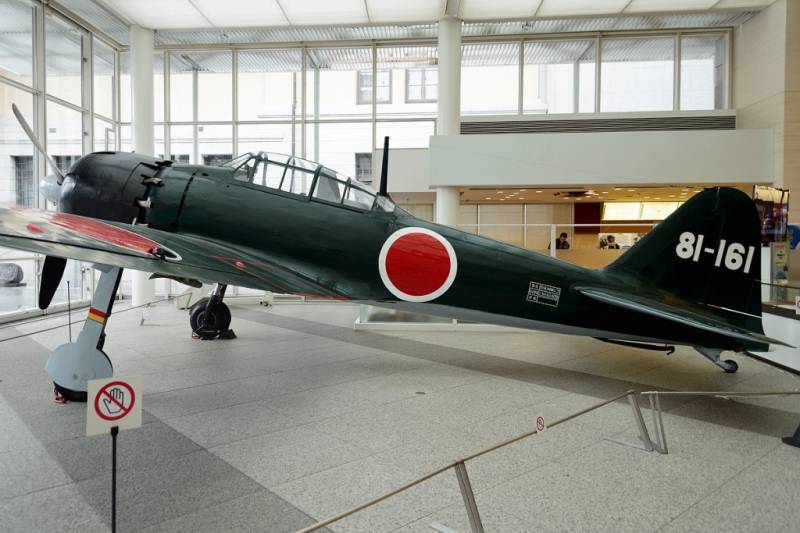 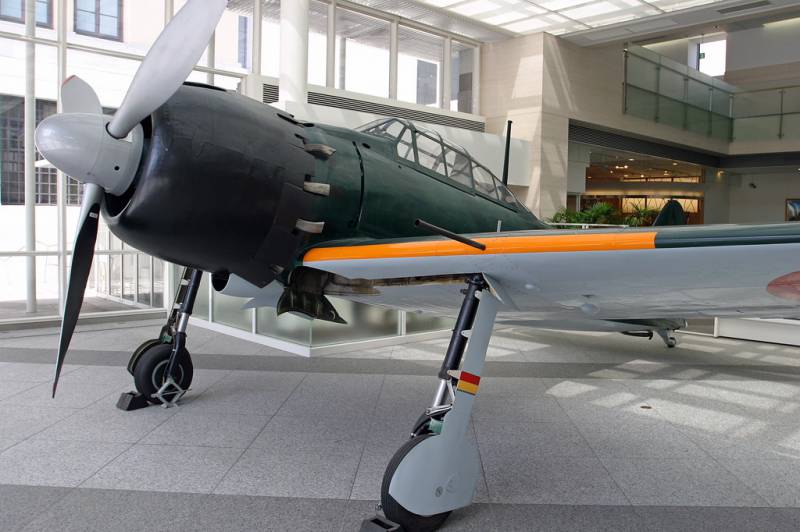 All these improvements did not allow the Zero to keep up with the new US carrier-based fighters: the new versions of the Hellcat F6F-5 and the Corsair F4U were noticeably superior in their basic characteristics. The situation was aggravated by the decline in the quality of training and experience of Japanese pilots. The results of the air battles were, as a rule, not in favor of the Japanese side. In one of the air battles in December 1943 of the year 50 А6М5 “Zero” with 93 F6F-5 “Hellcats” Japanese losses amounted to 28 fighters. It affected both the qualitative and quantitative superiority of the enemy.

Attempts to improve the protection and enhance the armament of the Zero fighter were embodied in the new A6М5 model 52С. On the fighters, which were launched at the end of 1944, in a small batch, they improved the protection of the cockpit by installing an 55-mm bulletproof glass in the back of the flashlight and reserving the pilot’s seatback.

The armament became more powerful and included two 20-mm cannons and three 13.2-mm machine guns (two were installed in the wing and one synchronously). 7.7-mm machine guns were abandoned completely, since they were useless in a battle with well-protected enemy fighters. Guides for eight 10-kg unmanaged air-to-air missiles were installed under the wings. The fighter was intended for action from coastal airfields against American bombers. The maximum speed of the fighter dropped to 540 km per hour. Flight range without PTB was 1520 km. 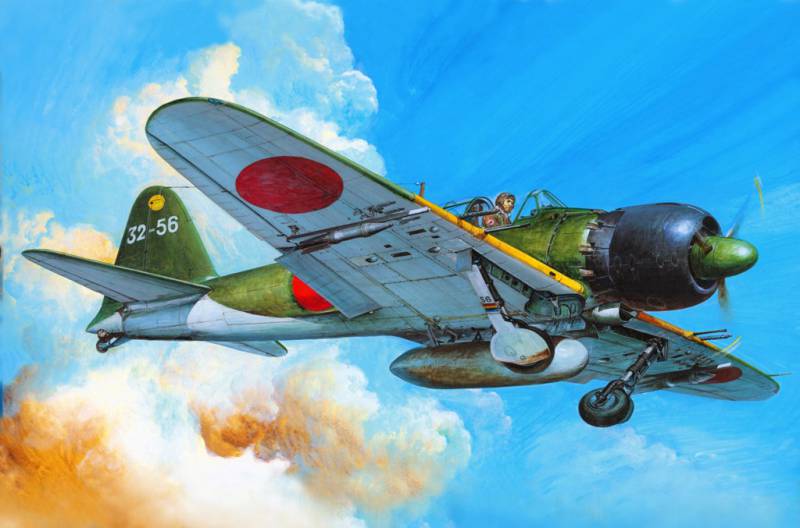 Carrier-based fighter-bomber A6M7 model 63 "Zero" was created on the basis of the previous modification A6M5s and was intended for operations with small aircraft carrier, converted from merchant ships on short flight equivalencies decks could not act dive bombers "Yokosuka» D4Y. The series production of A6М7 was launched in May 1945.

The maximum speed of the fighter-bomber at an altitude of 6400 meters was 543 km per hour, and the climb rate of 833 meters per minute. Flight range with outboard fuel tanks was equal to 2960 km, and the practical ceiling was 11180 meters. 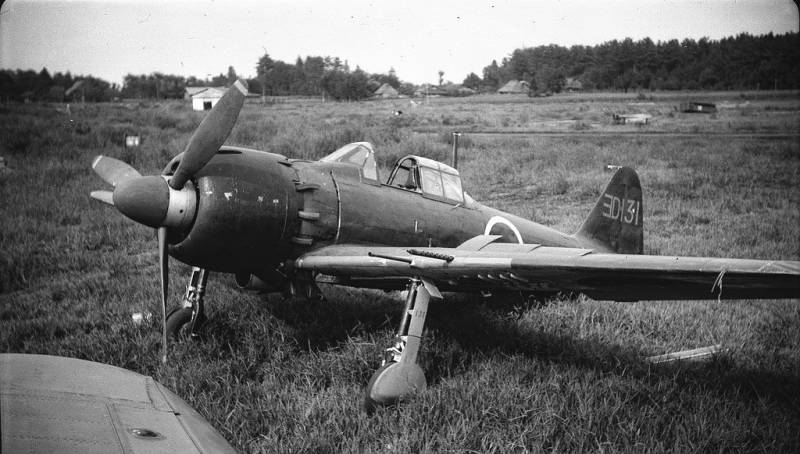 Small arms remained as in the modification A6M5 (model 52C). The ventral suspension unit has been reworked for the 250-kg bomb suspension. Under the wing, two 350-l fuel tanks could be suspended. 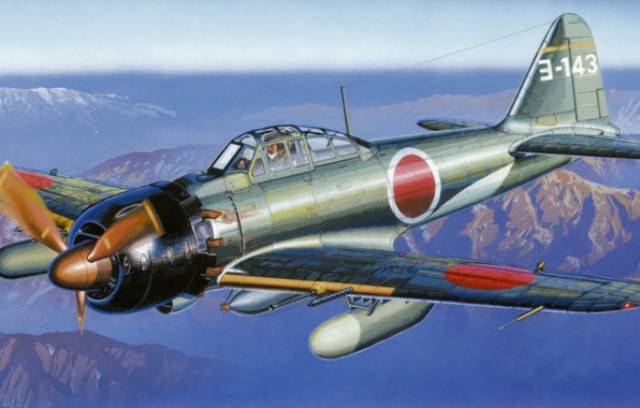 The latest modification of the Zero fighter was the A6М8 model 64. The prototype made the first flight in April 1945 of the year. Thanks to the more powerful Xinum-1560 64 engine, the prototype developed a maximum speed of 573 km per hour at an altitude of 6000 m, but even such characteristics could not be compared with enemy fighter speeds: F644F-6 "Hellcat" and 5 km per hour F716U-4 Corsair.

The armament of the new Zero consisted of two 20-mm cannons and two 13.2-mm machine guns, which were installed in the wing. Synchronous weapons on the fighter was not due to the large size of the new engine. Under the fuselage 500-kg bombs could be suspended, and under the wings two 350-l fuel tanks.

Model 6 did not go into the A8M64 series. Production capacity aviation Japan's industries were already destroyed by allied aviation and an earthquake.

The Zero A6М5 and А6М7 fighters made their last combat sortie on the Allied airplanes on August 15 on the 1945 of the year. In this air fight, 17 Zero shot down four American Hellcats, losing 15 of their cars. 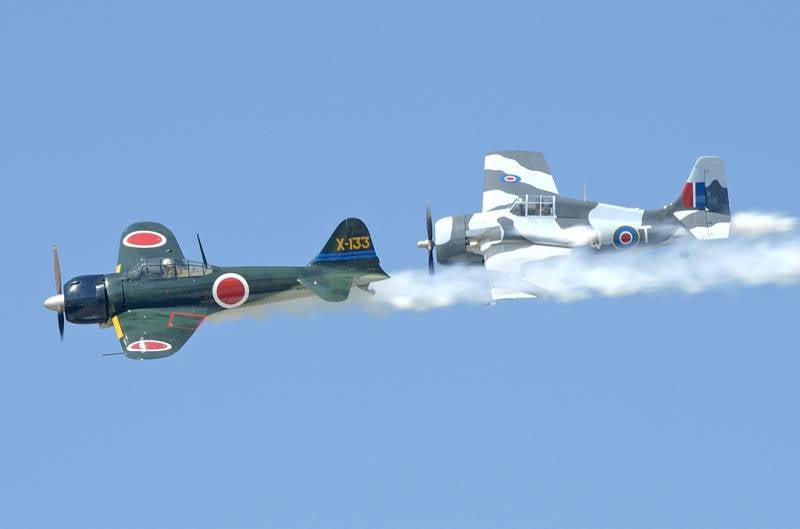 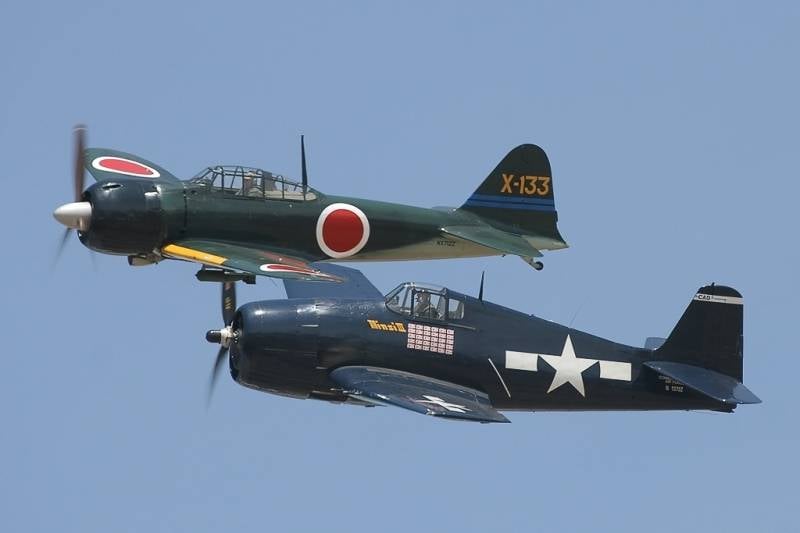 Until the end of the war, the Zero remained the main carrier-based fighter of the Japanese Imperial fleet. In the skilled hands of experienced pilots, even despite its obsolescence, the Zero was a worthy adversary superior to it in terms of the main indicators of allied fighters. 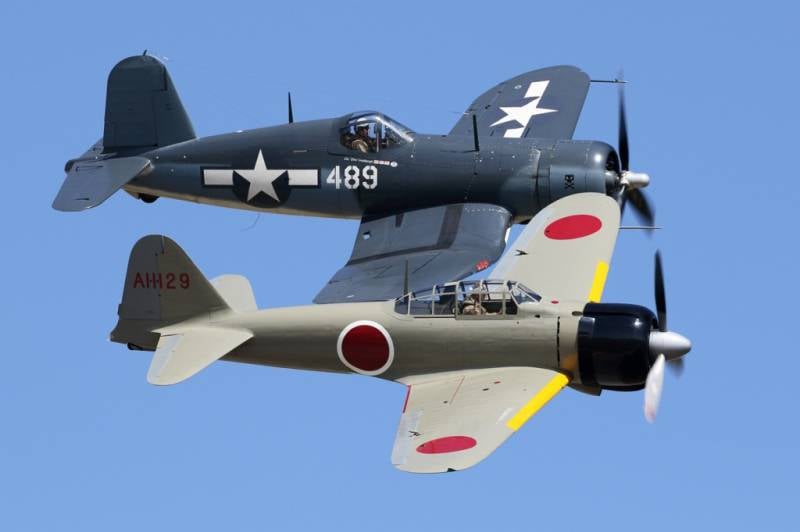 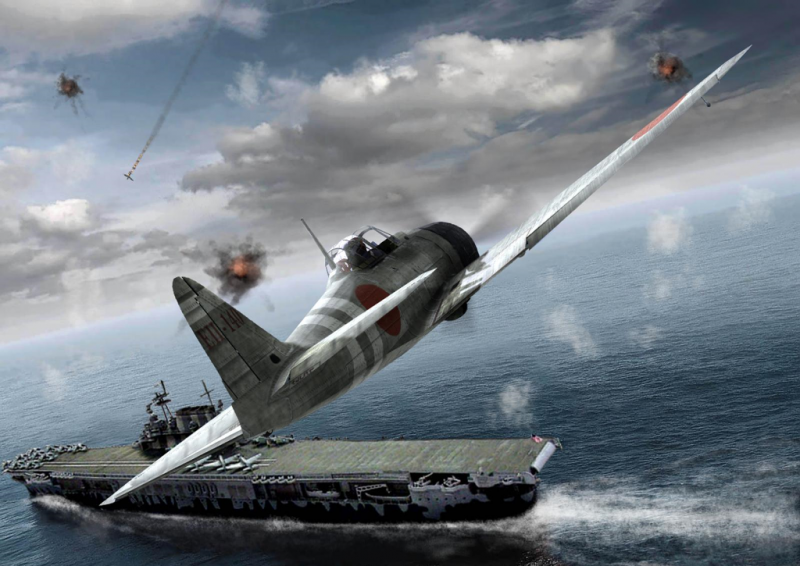 The deck fighter "Mitsubishi" A7M "Repu" was supposed to replace the outdated A6M "Zero" in 1943 year. Launched in the summer of 1942, the development of a new aircraft was greatly delayed. His first flight of the prototype "Repu" made in May 1944 year. It was a single-metal single-engine single-engine fighter with a low-folding folding wing.

A7M “Repu”, depending on the modifications of the prototypes, was equipped with 2000 engines with horsepower from A7М1 and 2200 from A7М2. Equipped with a 2200-strong motor and four-blade propeller A7М2 developed at a height of 8700 m maximum speed of 642 km per hour, and at an altitude of 6000 m 620 km per hour. The fighter climbed to 6000 meters in 6.1 minutes. The flight range without PTB of the new fighter was 1085 km, and the practical ceiling was 10900 meters. The plane showed on the tests good maneuverability, comparable to the "Zero".

To increase the survivability of the “Repu”, they installed protected fuel tanks, and the pilot’s cabin was equipped with a bulletproof windshield and an armored backrest of the pilot’s seat.

The A7М2 “Repu” series was planned to be equipped with either four 20-mm guns (model 22А), or two 20-mm guns and two 13.2-mm machine guns (model 22В). On the outside of the suspension, the fighter could carry two 250-kg bombs under the wings and an 750-liter outboard fuel tank under the fuselage. 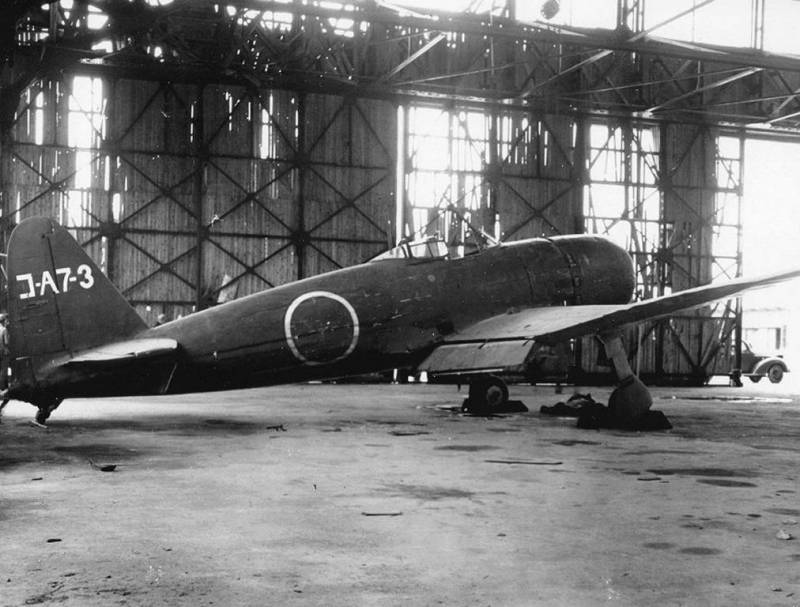 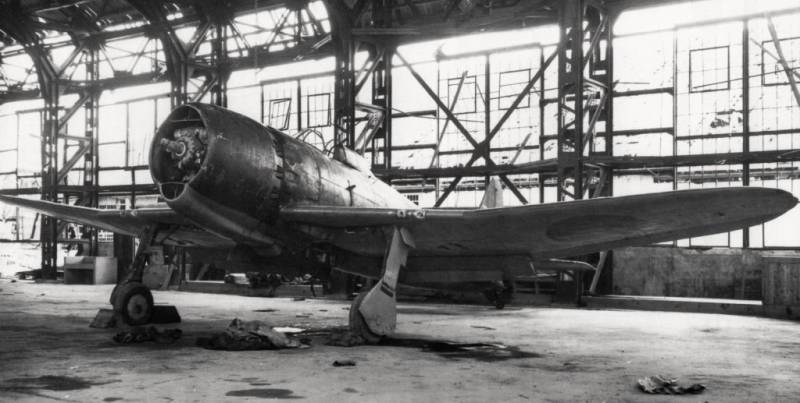 The only serial fighter A7M2 "Repp" in the factory hangar, Japan, August-September 1945 (www.warbirds.jp)

Before the end of hostilities, only one serial A7М2 Repu fighter and six prototypes were released. 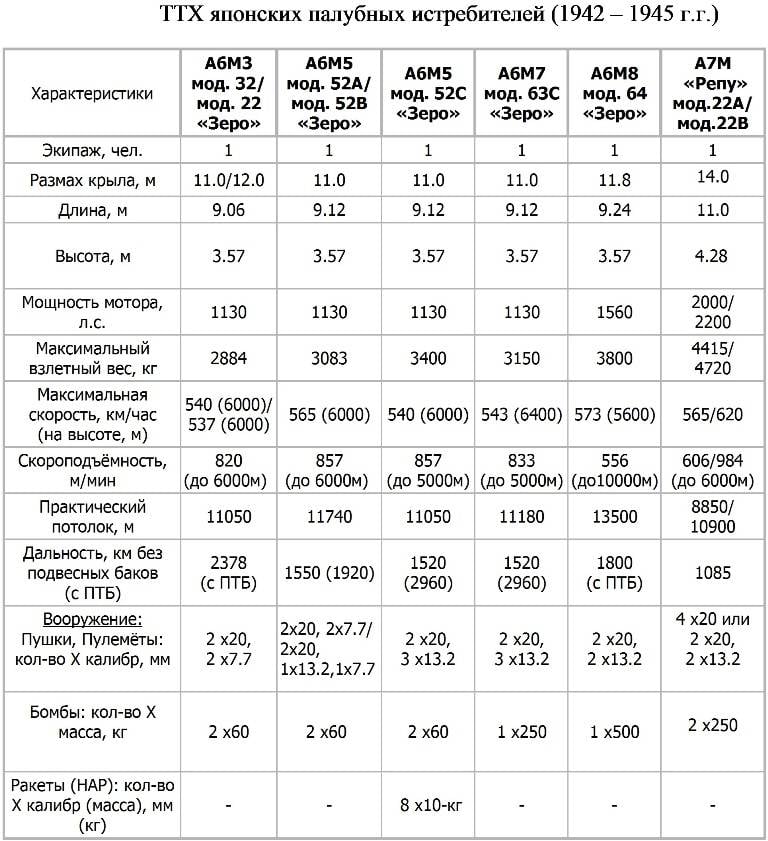 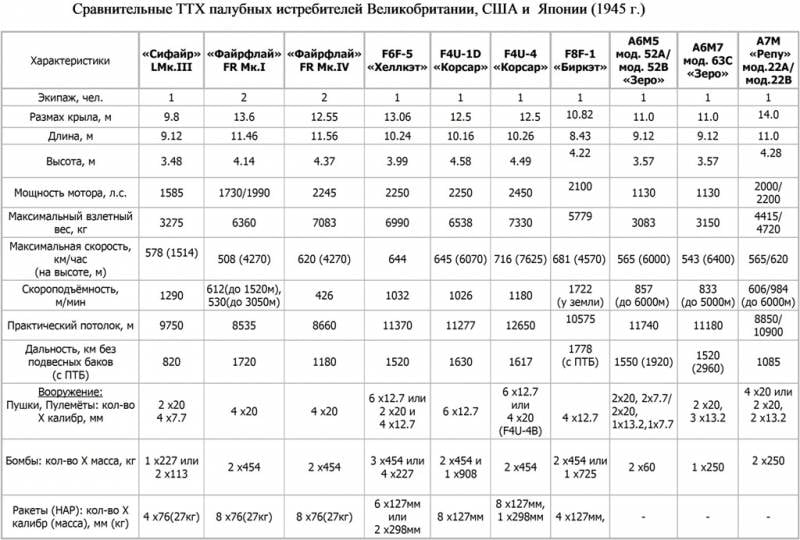