German politicians are beginning to recall the lessons of history, which are many in relations between Germany and Russia

20 2016 June
52
Last week, a two-day meeting of NATO defense ministers of defense ministers took place in Brussels. It decided to send four multinational high-readiness battalions to Lithuania, Latvia, Estonia and Poland. The ministers agreed on a number of other measures to strengthen the Alliance’s forces on the eastern flank of NATO, but the main thing for them was the decision to deploy high-readiness battalions in the border areas of Russia. 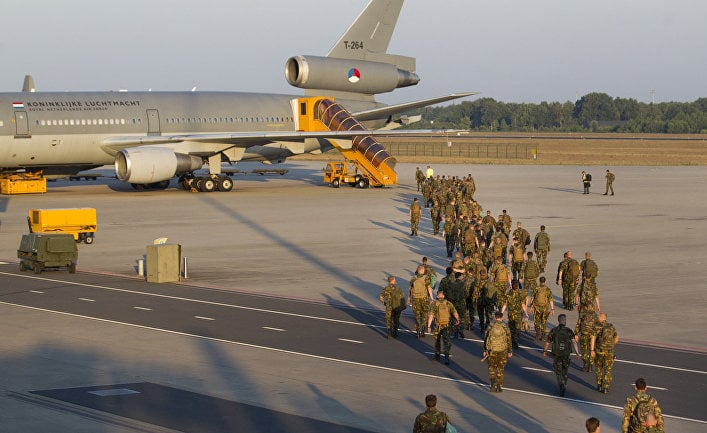 The basis of each such battalion will be the military one of the NATO countries. Soldiers of other allied armies will be used only to strengthen these units. The Western media, citing sources in NATO, reported that the battalion stationed in Poland would be headed by the Americans, in Latvia by the Canadians, in Estonia by the British, in Lithuania by the Germans.

On this news The leading German politicians representing the Social Democratic Party and left-wing forces reacted strongly. Former German Chancellor Gerhard Schroeder commented on the upcoming initiative of the military alliance before the meeting in Brussels. Speaking on the eve of the Alliance’s ministerial meeting at the conference of the German Chamber of Commerce, Schroeder warned: “Taking on the tasks of strengthening NATO’s eastern flank for Germany right before the upcoming anniversary of the German attack on the Soviet Union 22 June 1941 would be a serious mistake.”

German Defense Minister Ursula von der Lyayen ignored the opinion of the former chancellor and agreed to form an alliance battalion in border Lithuania. This is not the first anti-Russian demarche von der Lyayen. In early June, she presented the so-called White Paper on Germany’s security strategy. There, Russia was reclassified from partners to opponents.

This caused a serious scandal. Numerous denials followed. German Ambassador in Moscow Rüdiger von Fritsch, for example, called the media reports on the policy change regarding Russia “speculations”. The publication of the book has been postponed. At the same time, Ursula von der Lyayen’s direct support for NATO’s anti-Russian initiatives in the Baltic states leaves no doubt: media information about the White Paper of Germany is in line with the real policy of the government of Chancellor Merkel.

It is worth remembering that the German armed forces were restored only ten years after the end of the Second World War. The lessons of that war seriously affected the tasks that the Germans had defined to their new military department. In the German constitution even introduced a ban on the use of the army outside the country. He existed for nearly forty years.

In the summer of 1994, the German Constitutional Court overturned the amendment to the 24 Chapter of the Basic Law, which prohibited the involvement of the Bundeswehr in military operations abroad. Since then, the German military has been actively involved in international peacekeeping forces. In recent years, they have been fighting in the “hot spots” of the planet as part of NATO combat formations. Now, with the filing of the current Minister of Defense, the Germans are ready to take positions against Russia.

Neither experts nor politicians expected this turn of events. As recently as last Thursday, Sergei Ordzhonikidze, chairman of the Russian Public Council on International Cooperation and Public Diplomacy, convinced the audience: “The Germans have historical memory, they were brought up on this memory, and the whole history of Germany is connected with Russia. Of course, Germany is the most difficult country for NATO, the most difficult country for the United States, which needs to launch a German soldier to fight against a Russian soldier. This is what has been etched in the German’s head since 1945, and thanks for this to the German educational school. ”

However, it turns out that ex-Chancellor Gerhard Schröder has such a memory, but Ursula von der Lyayen, a graduate of the gymnasium of the Saxon city of Lehrte, does not have it at all. As well as many of her compatriots, who rode the German media. Today, aggressive Russophobia in German editions rolls over. It creates such a social environment that allows politicians, like women from the Ministry of Defense, not to look too much at the history of relations between our countries and to pull Germany towards a new confrontation with Russia.

About the interests of Europe and the "fatal mistakes"

It is impossible to say that the complete oblivion of history has come to the German land. A week ago, the famous politician Oscar Lafontaine, who was under German Chancellor Gerhard Schröder’s Minister of Finance, sharply criticized the government of Angela Merkel for supporting the US anti-Russian actions.

According to La Fontaine, Germany is interested "in a joint security system with Russia, and not in confrontation with it, which the United States has been striving for over the past few years." Such a policy of the United States is contrary to the interests not only of Germany, but of all of Europe.

These statements Oscar Lafontaine made at a rally in defense of peace, which took place near the US Air Force base in the German Ramstein. The protest was attended by several thousand people. Here is one of the largest military bases outside the United States. Ramstein has more than 16 thousands of US military and civilian specialists. As the rally newspaper Contra Magazin, which covered the rally, noted, many Germans consider Ramstein a "symbol of the continuing American occupation of Germany."

At this time, thousands (according to the organizers - over 7 thousand people) caring Germans came out to protest against the use of drone unmanned aerial vehicles. According to the information spread by the American electronic publication The Intercept and the German weekly Der Spiegel, the Americans from Ramstein control their combat drones, which conduct reconnaissance and deliver air strikes in the airspace of the Middle East, Central Asia and Africa. Therefore, the Germans opposed the use of the territory of their country to implement the aggressive plans of the United States.

Thought over in Germany and about other threats that the policy of the United States bears to their country. The newspaper Die Zeit, for example, has preoccupied itself that, in response to the deployment of the American missile defense system at its eastern borders, Russia may withdraw from the treaty on the elimination of medium and short-range missiles.

Die Zeit author Jochen Bittner notes that deploying a missile defense system can destroy all disarmament efforts that have been going on for decades. He emphasizes that the outcome of the NATO summit to be held on July 8 and July 9 in Warsaw may be the official pretext for Russia’s withdrawal from the treaty on medium-sized missiles. As a result, instead of the declared defense stability, the security of not only Germany, but the whole of Europe will decrease significantly.

Even the Minister of Foreign Affairs of Germany Frank-Walter Steinmeier, who usually does not dispute the official position of the government of Chancellor Merkel, was worried. “What we shouldn’t do now is continue to aggravate the situation with a rattling weapons and the war cry, ”the minister quoted Saturday the weekly Bild am Sonntag.

"Who is sure that symbolic movements tanks will provide more security on NATO’s eastern borders, it’s mistaken, ”said Steinmeier after completing the largest in recent history of the Polish Armed Forces Anaconda 2016 exercises in Poland.

The maneuvers involved more than 3000 units of military equipment, 31 was attended by a thousand soldiers from 24 countries. They practiced "a reflection of a covert attack from the east without an official declaration of war." Trained on the Polish training grounds and soldiers of the Bundeswehr.

Now Steinmeier convinces the Germans that it would be a “fatal mistake” to focus all attention on military aspects and look for a way out only in the policy of intimidation. In addition to the general desire to defend themselves, there must always be a readiness for dialogue.

It is a pity that this understanding did not come to the minister at the time when decisions were made about the whole cascade of military exercises directed against Russia. However, it’s not a fact that Steinmeier’s frank recognition will be followed by some practical actions by the German Foreign Ministry.

Most likely, the statement of the head of the Ministry of Foreign Affairs is caused by the changing mood in Germany for the NATO military preparations. It has not yet led to noticeable changes in German public opinion, but has already forced politicians to recall the lessons of recent history and to beware of rash steps and decisions. It cannot be ruled out that over time this may become the basis for a new dialogue and cooperation between Germany and Russia.