Fighter "Chance-Vout" F4U "Corsair" was considered the best American carrier-based aircraft in its class. The development of the fighter, designed to replace the F2A "Buffalo" and F4F "Wildcat", began in the 1938 year. His first flight "Corsair" made in May 1940 year.

A single-engine all-metal fighter received a low-lying wing with a characteristic “reverse gull” break, which possessed better aerodynamics and reduced the length of the main landing gear, in addition, it facilitated an emergency landing for the pilots. 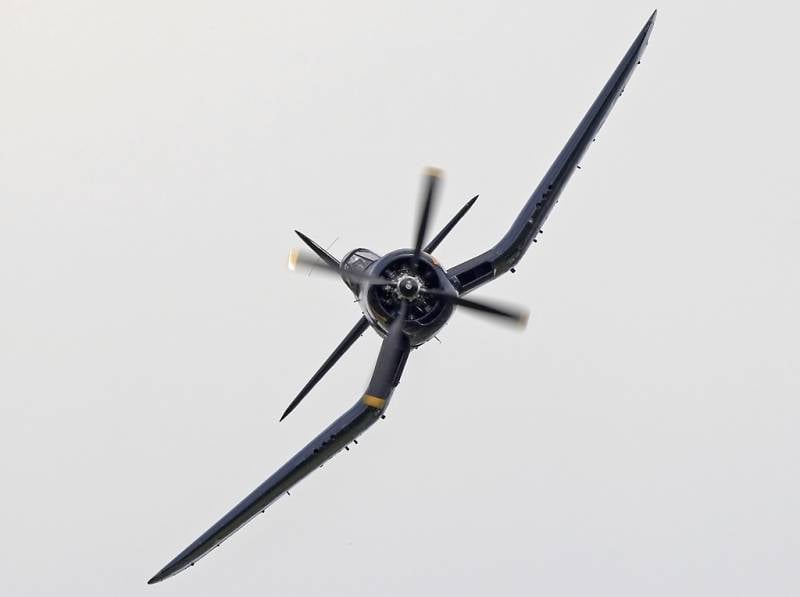 The serial production of the first Corsair model, the F4U-1, was launched in June 1942 of the year, but it did not hit the decks of aircraft carriers. Poor visibility from the cockpit, the tendency to collapse on the wing and stall into a corkscrew, as well as the hard depreciation of the landing gear pillars made it impossible for an ordinary pilot to land on the deck of an aircraft carrier without a crash. F4U-1 entered service only coastal squadrons of the Marine Corps.

In October, the first deck modification of the Corsair, the F1943U-4A, was launched in the 1 series. After a number of improvements, the main drawbacks of the previous model were eliminated: improved view from the cockpit by installing a cockpit canopy and raising the pilot's seat, reducing the rigidity of the chassis shock absorbers while increasing their travel.

Deck Corsairs F4U-1A, supplied to the UK, were named “Corsair” Mk.II, Mk.III (for F3A-1) and Mk.IV (F4U-1D / FG-1D). To meet the growing demand for a new fighter, its production was additionally deployed at Brewster (F3A) and Goodyear (FG). 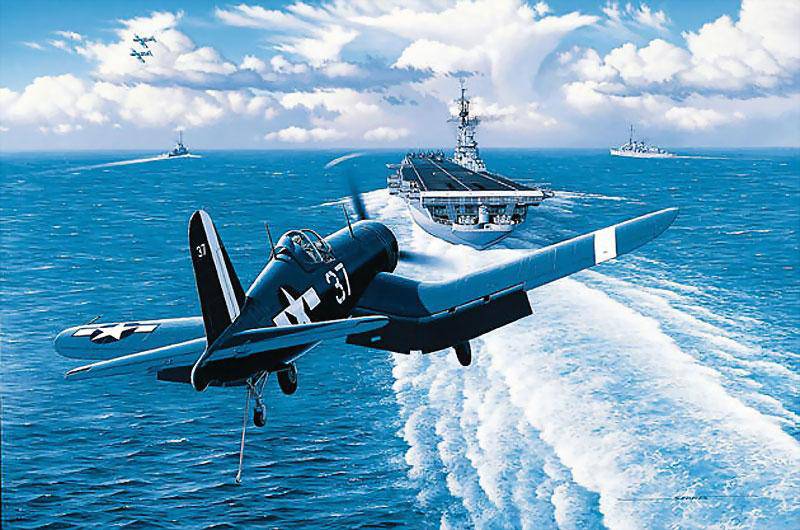 Fighter F4U-4 "Corsair" comes in to land on the deck of an aircraft carrier from the left turn (to improve visibility) (Fig. Site gallery.ykt.ru)

The main armament of the F4U “Corsair” fighters were six 12.7-mm machine guns placed in the wing. On small-batch models, the F4U-1С and F4U-4В instead of machine guns, four 20-mm guns were installed, which had a much lower rate of fire. 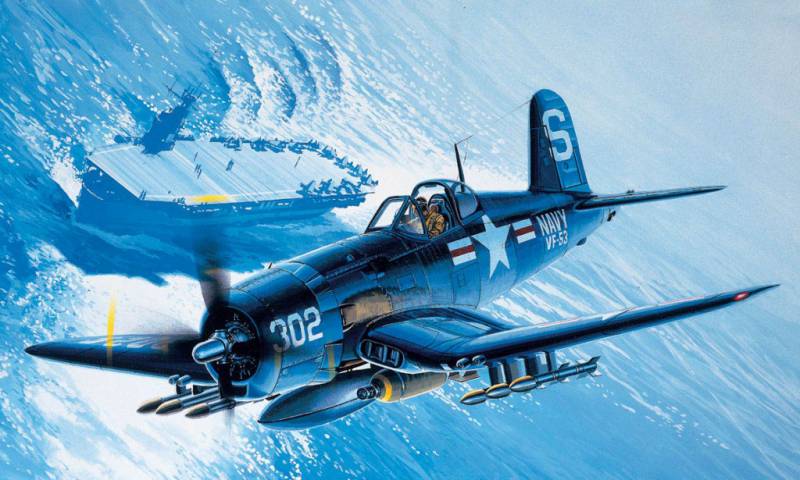 The first deck modification of the F4U-1А fighter could carry one or two 454-kg bombs or an outboard fuel tank per liter 644 on the ventral node. The fighter-bomber F4U-1D "Corsair" was additionally equipped with additional suspension points for two 454-kg bombs and eight 127-mm unguided HVAR missiles. The total bomb load (one 908-kg bomb under the fuselage and two 454-kg under the wings) reached 1800 kg. Instead of bombs under the wings, two PTBs of 583 liters could be hung. 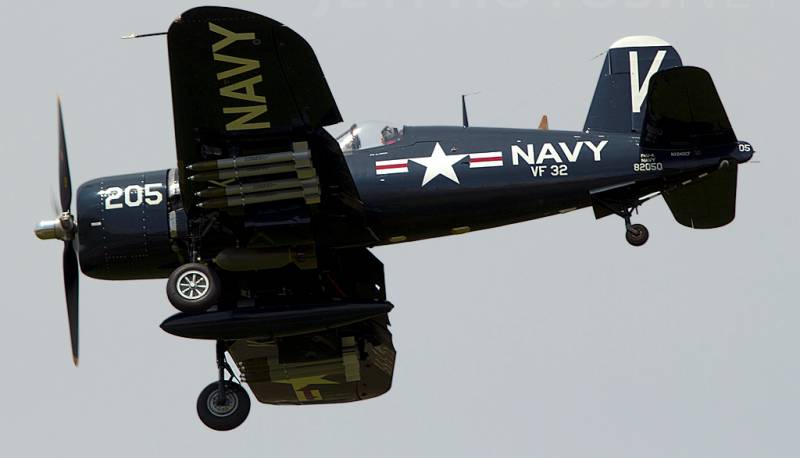 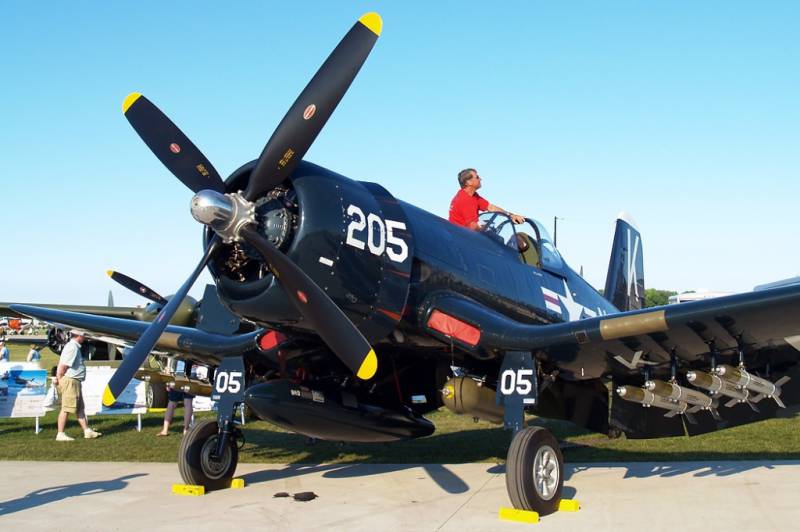 The outboard armament of the F4U-4 usually consisted of two 454-kg bombs and eight 127-mm unguided rockets on the wing assemblies. The later F4U-4 series were able to hang a single 298-mm Tiny Tim rocket under the fuselage.

The night version of the Corsair F4U-2 fighter (a total of 34 based on the F4U-1 / 1А) was built with an AN / APS-6 radar located on the right wing console. The detection range of bombers it was no more than 8 kilometers. The number of 12.7-mm machine guns was reduced to five. The British carrier-based fighter "Corsair" Mk.II (III, IV), in contrast to their American counterparts, had a wing console see the 36 shortened for the possibility of placing them in the lower hangars of the British aircraft carriers. 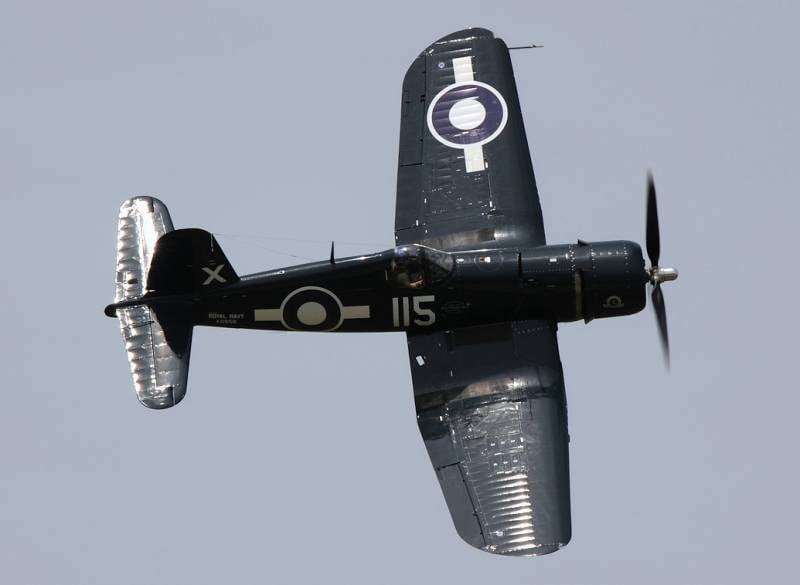 Protection of the Corsair pilot was provided by an armored seat back, an armored pod and triplex glass of the cockpit visor. 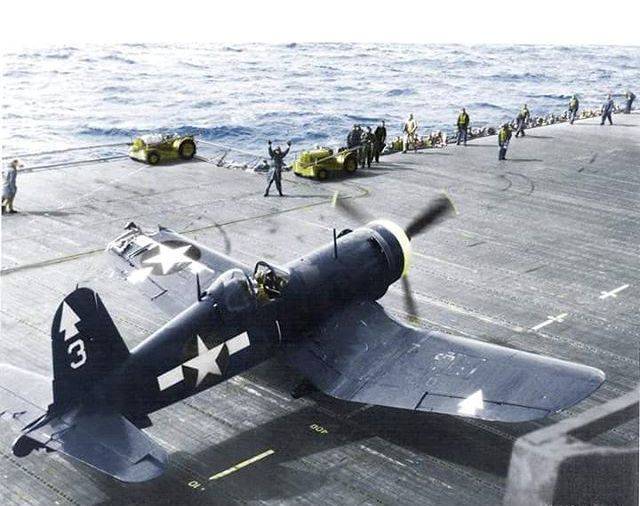 With the start of 1944, the deployment of F4U-1C / D Corsair deck fighter-bomber squadrons began on the decks of American aircraft carriers. 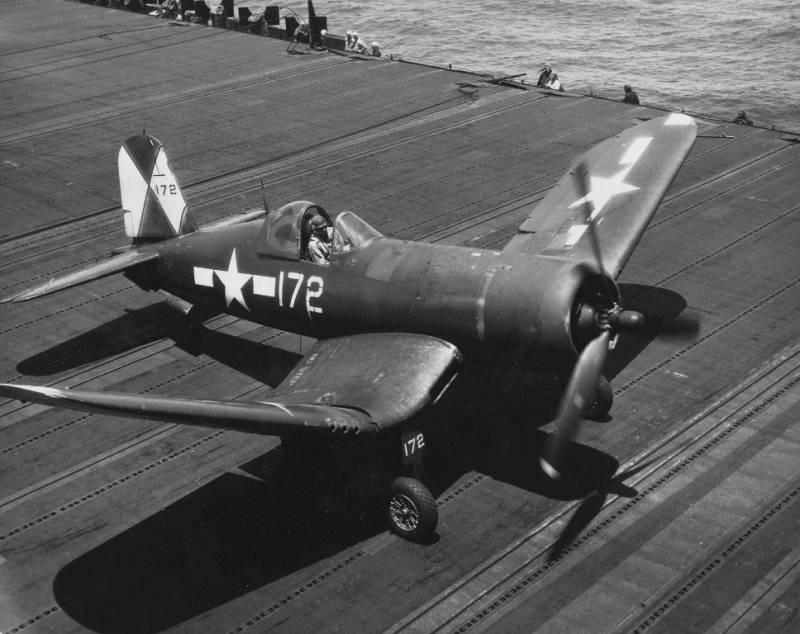 Fighter-bomber F4U-1D "Corsair" on the deck of the aircraft carrier "Essex" after the sortie, July 1945 g. (Photo site 3.bp.blogspot.com)

The British first combat squadron "Corsairs" were formed in the fall 1943 year. From April 1944, they took an active part in the operation to destroy the German battleship Tirpitz in the Norwegian Arctic waters as escort fighters and attack aircraft. 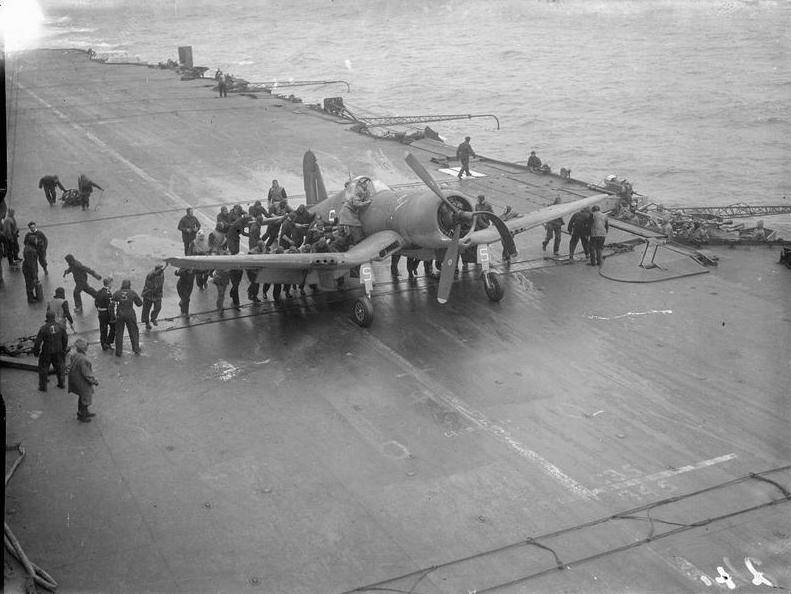 "Corsair" Mk.II on the deck of the aircraft carrier "Illastries" after another attack of the German battleship "Tirpitz", April 1944. (Photo site ww2today.com)

24 August 1944 one of the "Corsairs" Mk.II from the aircraft carrier "Formidable" managed to get one hit in the battleship 454-kg by a bomb that did not harm the armored monster. Point in stories with the "Tirpitz" put the British heavy bombers "Lancaster" with 12000-pound bombs only in late October. 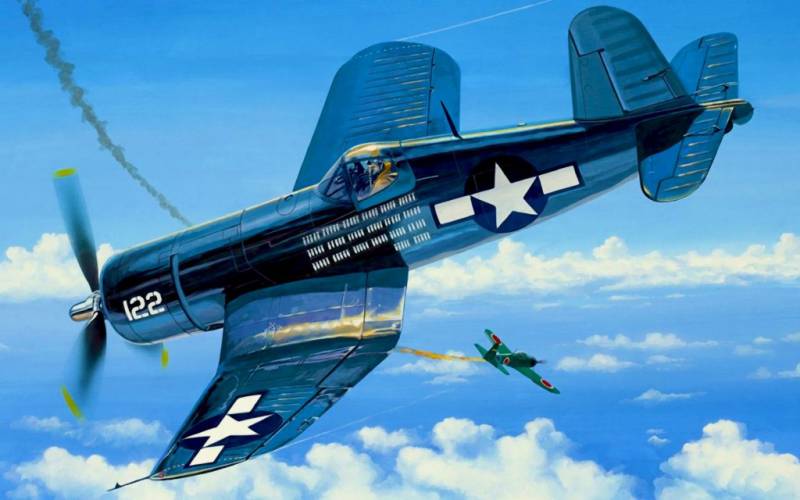 Possessing high speed characteristics, the Corsair, skillfully using the tactics of delivering lightning strikes and quick leaving, proved to be an excellent fighter in air battles. The ratio of casualties and downed enemy planes at the Corsair was one of the highest and was 1 / 11.3. 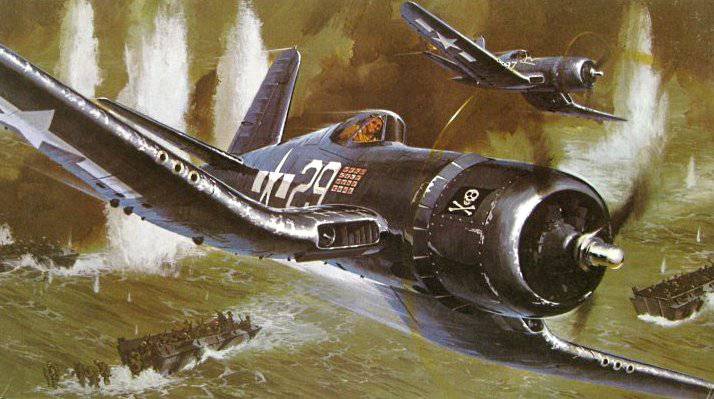 In April, the 1945 of the year in the course of the Okinawa fighting "Corsairs" F4U-1С / D were actively used to provide direct fire support to the naval landing forces to seize the island. For their high performance, the Corsairs called the "Angels of Okinawa." 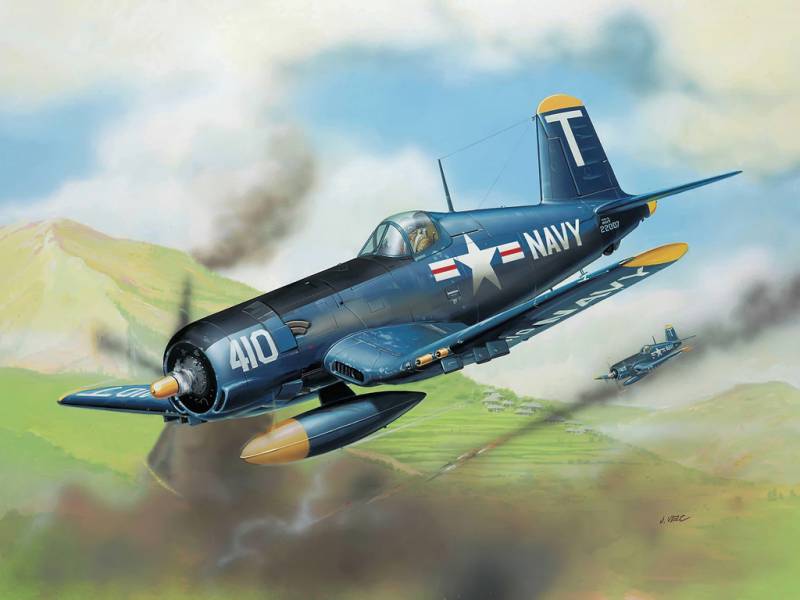 More than three dozen fighter "Corsair" has survived to our days in flight-fit condition and regularly participate in various air shows. 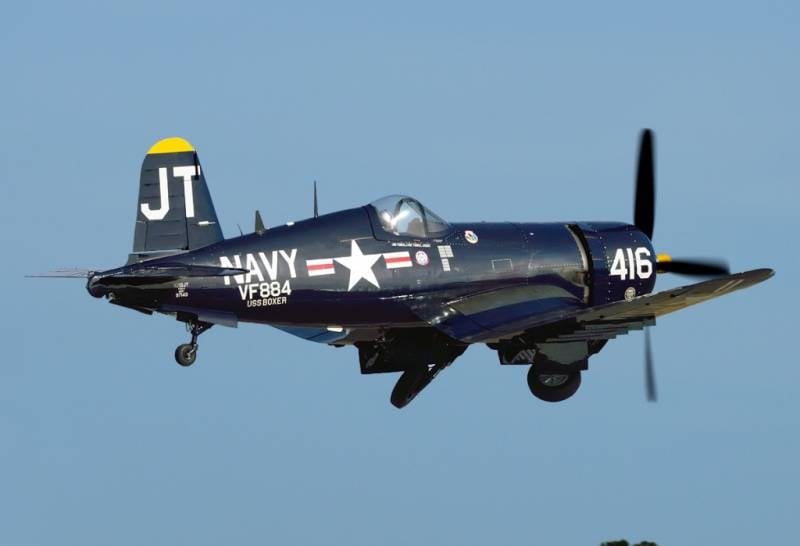 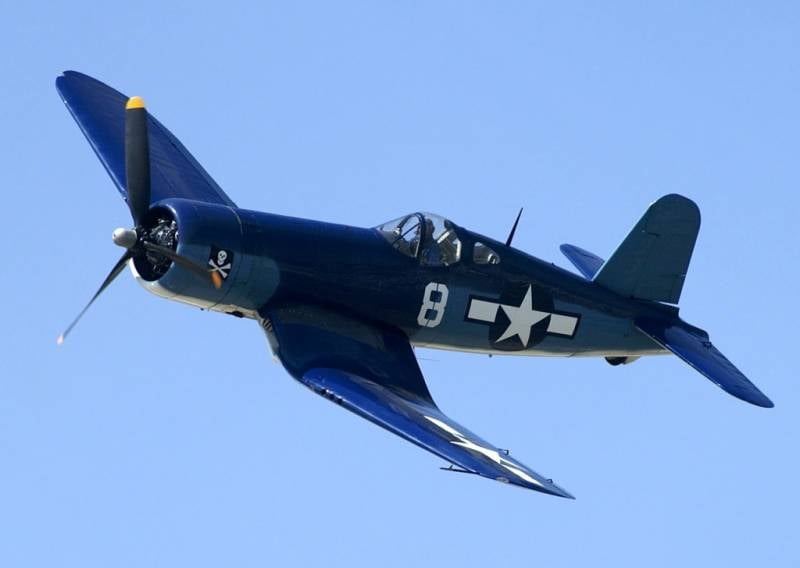 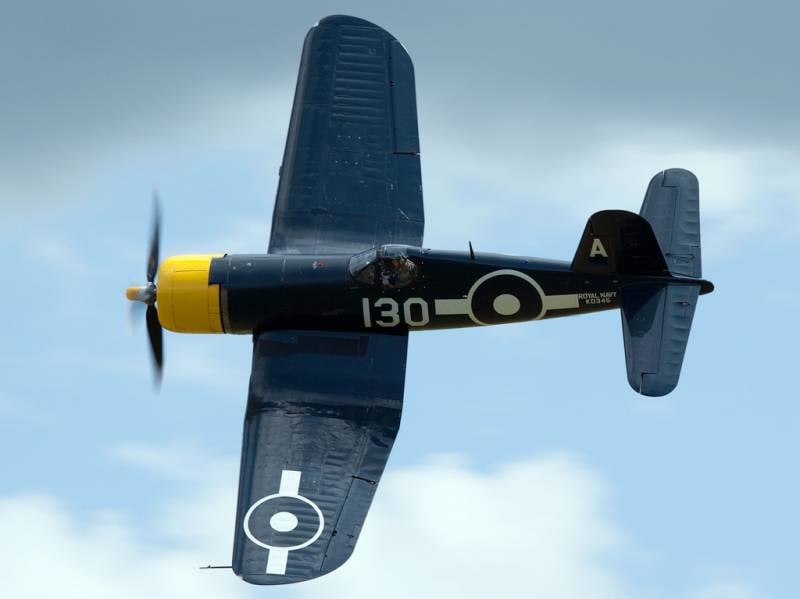 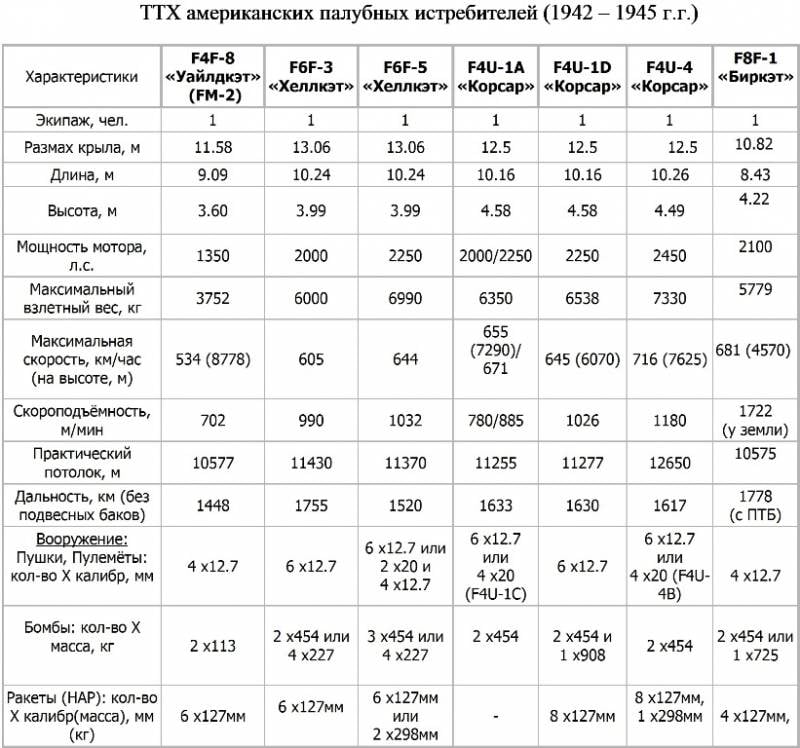