25 2016 June
25
During the Second World War, duels were fought not only on land and in the air, but also at sea. And, remarkably, submarines also participated in duels. Although the bulk of the German Navy was involved in battles on the Atlantic, a significant proportion of the battles between submarines took place on the Soviet-German front - in the Baltic, Barents and Kara Seas ...


The Third Reich entered World War II, having not the most numerous submarine fleet in the world - only 57 submarines. Much more submarines were in service with the Soviet Union (211 units), the USA (92 units), France (77 units). The largest naval battles of World War II, in which the German Navy (kriegsmarine) participated, took place in the Atlantic Ocean, where the main enemy of the German forces was the most powerful group of the US and British Navy. Nevertheless, a fierce confrontation took place between the Soviet and German fleets - in the Baltic, in the Black and North Seas. Submarines took an active part in these battles. Both Soviet and German submariners showed tremendous skill in the destruction of enemy transport and combat ships.

In the Baltic. Soviet submariners began to perform combat missions already in the summer of 1941. Until the end of 1941, they were able to send German transport vessels to the bottom of the 18. But the submariners were paying a huge price - in the 1941, the Baltic Navy lost 27 submarines.

The first victory in the duels between the submarines of the USSR and Germany was won by the soldiers of the Kriegsmarine. This happened on 23 on June 1941, when the German U-144 submarine under the command of Lieutenant Friedrich von Hippel was able to send a Soviet submarine M-78 (under the command of Senior Lieutenant Dmitry Shevchenko) to the bottom of the Baltic Sea. 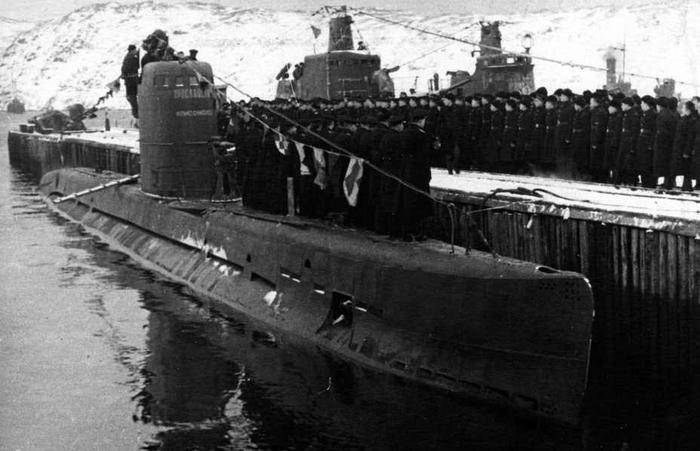 But U-144 failed to increase its combat list. 10 August 1941 The German ship was discovered by the Soviet medium diesel submarine U-307 Pike (commanded by Lieutenant Commander N. Petrov) in the area of ​​Fr. Dago in Soalosund Strait (Baltic). "Pike" produced a two torpedo salvo. Both torpedoes hit the target exactly, and the U-144 along with the entire crew (28 man) was destroyed.

Another Malyutkoy, who died in a collision with German submarines, was the M-99 submarine under the command of Senior Lieutenant Popov Boris Mikhailovich. M-99 was destroyed during combat duty off the Utö Island by the German submarine U-149 (commander Lieutenant Commander Horst Höltring), who attacked a Soviet submarine with two torpedoes. This happened on June 27 of the year.

In addition to the Baltic submariners, fiercely fought with the German troops and their colleagues from the Northern Fleet. The first submarine of the Northern Fleet, which did not return from the military campaign of the Great Patriotic War, was the submarine M-175 under the command of Lieutenant Commander Mammoth Lukich Melkadze. M-175 fell victim to the German ship U-584 (commander lieutenant commander Joachim Decke). This happened on 10 on January 1942 in the area north of the Rybachiy Peninsula. The German car moved under water and overtook the Soviet ship and attacked it, firing 4 torpedoes, two of which hit the target. The M-175 sank, taking the crew member 21 with them into the sea.

Successful for Soviet submariners was the attack of the Soviet C-101 middle-class submarine of the German U-639 submarine, conducted by 28 on August 1943 in the Kara Sea. German submarine U-639, under Lieutenant Wichmann, carried the combat mission of laying mines in the Gulf of Ob. The German submarine was moving on the surface. Trofimov ordered to attack the enemy vessel. C-101 fired three torpedoes, and the U-639 sank instantly. In this attack, the German submariners 47 died.

Thus, the total score of fights between German and Soviet submarines - 4: 2 in favor of the German submariners. In a duel between submarines, the one who quickly calculated the location of the enemy and was able to deliver accurate torpedo strikes won.

Ctrl Enter
Noticed oshЫbku Highlight text and press. Ctrl + Enter
We are
22 June. Brest Fortress. Battle ReconstructionDiplomats of the People's Commissariat of Defense: on the eve and during the war
Military Reviewin Yandex News
Military Reviewin Google News
25 comments
Information
Dear reader, to leave comments on the publication, you must sign in.