By mid-1942, aircraft carriers, deck aviationas their main weapon, finally established themselves as the main striking force in naval battles of the Second World War period, displacing traditional battleships previously in this role. The battleships were inferior to deck aircraft in mobility, the range of use of the main armament, the possibility of operational concentration of firepower in the right place at the right time.

New realities of war at sea and the accumulated experience of combat use put forward new, increased demands on the characteristics of carrier-based aircraft. Developed long before the outbreak of World War, aircraft carrier aircraft, for the most part, no longer met the requirements of modern times. Aircraft companies solved the task set for them by the military in two ways: by developing new and modernizing models of deck-based aircraft equipment already in service.

In the UK, in order to meet the increased demand for deck fighters, by analogy with the "Sea Hurricanes", it was decided to adapt the Supermarine Spitfire land fighter aircraft to operations from aircraft carriers. The single-seat Spitfire Mk.V was chosen as the base case, making its first flight in 1941 year and having performed well in air battles with German Messerschmitts.

In the summer of 1942, the new Sefira began to enter service with the Royal Deck Fighter Squadrons. fleet. If the Mk.IB modification was received by the re-equipment of the previously issued ground Spitfires, the Sefire Mk.IIC arrived at the fleet from aircraft factories and had a reinforced frame.

Deck "Supermarine" "Sifire" Mk.IIC with the "Merlin-46" engine with 1415 horsepower, developed a maximum speed of 550 km per hour at the height of 6309 m and speed of 720 meters per minute. The flight range was 700 km, and the practical ceiling 11460 meters. The low-altitude modification of the LMK.IIC was equipped with the “Merlin-32” engine in 1645 horsepower and the new 4-x blade propeller, which provides the fighter with a speed up to 1400 meters per minute at altitudes up to 3000 meters.

The fighter was armed with two 20-mm cannons and four 7.7-mm machine guns mounted in the wing. The pilot's protection was provided by an armored neck. It is possible to install the holder under the 227-kg bomb under the fuselage (in practice, an additional fuel tank could be hung there). 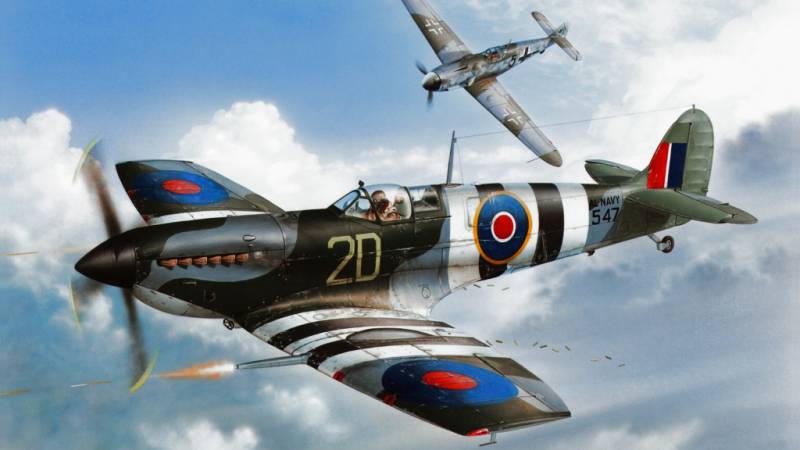 The first Sifires, as direct heirs of land fighters, had non-folding wings, which limited their ability to deploy on aircraft carriers (they did not fit into the dimensions of the aircraft lifters). 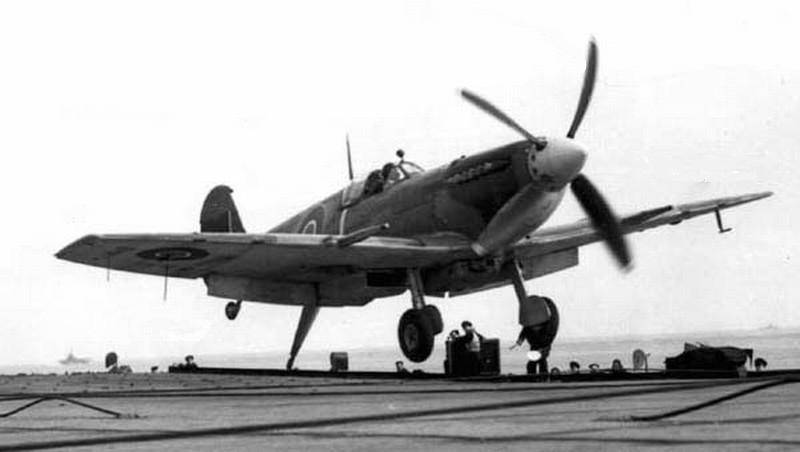 Sifire Mk.III lands on the deck of an aircraft carrier (Photo by allaircraft.ru)

During combat operation, another serious flaw in Sifire emerged - limited visibility from the pilot's cabin, which, combined with high landing speed, often led to accidents and disasters. In order to reduce non-combat losses during the landing on the carrier deck, the mounting of the brake hook was strengthened, and the pilots received practical recommendations for landing on the aircraft carrier.

The truly deck modification of Sifire was the Mk.III / L Mk.III. The fighter received a manually folding wing, the Merlin-55 / 55М engine with horsepower 1585 with a maximum speed of 578 km per hour at an altitude of 1514 meters and a speed of 1290 meters per minute. 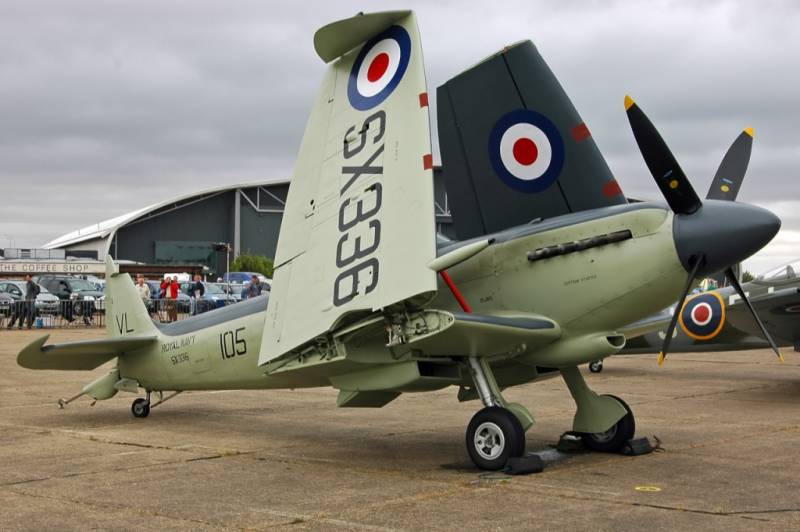 Sifire Mk.ХVII with a folded wing in the parking lot at the airshow. Our days (Photo site images.vfl.ru)

Armament "Sifire" LM.III. The 1944 of the year was supplemented with four 27-kg unguided rockets. Under the wing could be suspended two 113-kg bombs. This modification of the deck fighter was the most massive. In addition to it were built reconnaissance LR Mk.III with AFA. 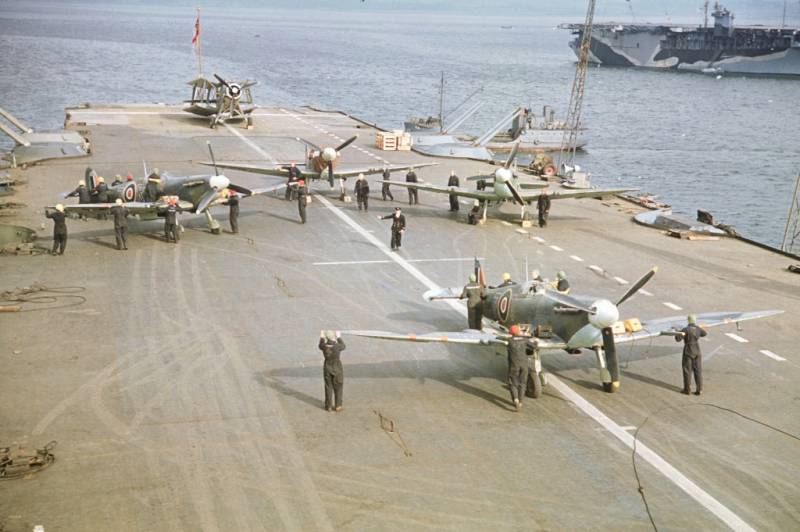 The baptism of Sifire, Mk.IIC, was received during the landing of Allied forces in North Africa in November 1942. Fighters operated from the decks of aircraft carriers "Victories" and "Formidable". Because of the impossibility of folding the wings, the Mk.IIC did not fit into the aircraft carrier aircraft lifts and were placed only on the flight deck in a limited number (six fighters). In the air battle "Sifire" shot down two enemy fighters D.520. 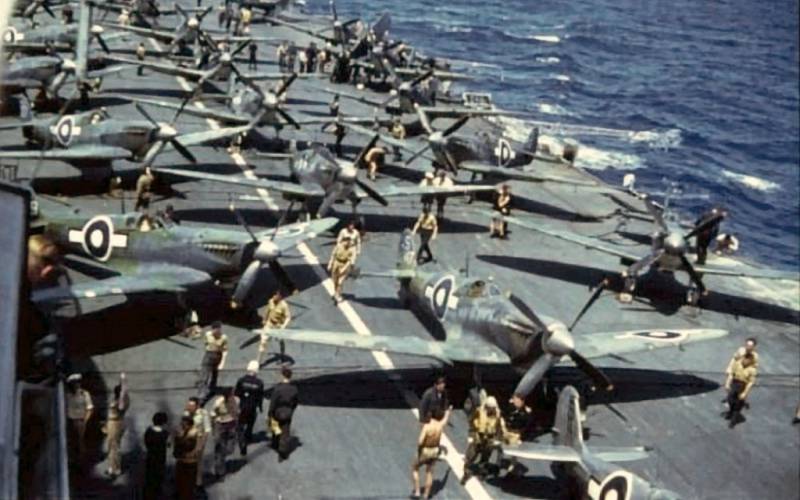 Since the fall of 1943, the delivery of the Sifires Mk.III to the front deck squadrons of the Sifire began. The new fighters were primarily sent to aircraft carriers operating in the Asia-Pacific theater. The main combat mission of the Sifire was to provide air defense of aircraft carrier formations, since the short range of action (even with outboard tanks) did not allow them to accompany strike aircraft. Created initially as a high-speed and maneuverable fighter "Cifire" successfully coped with the task. 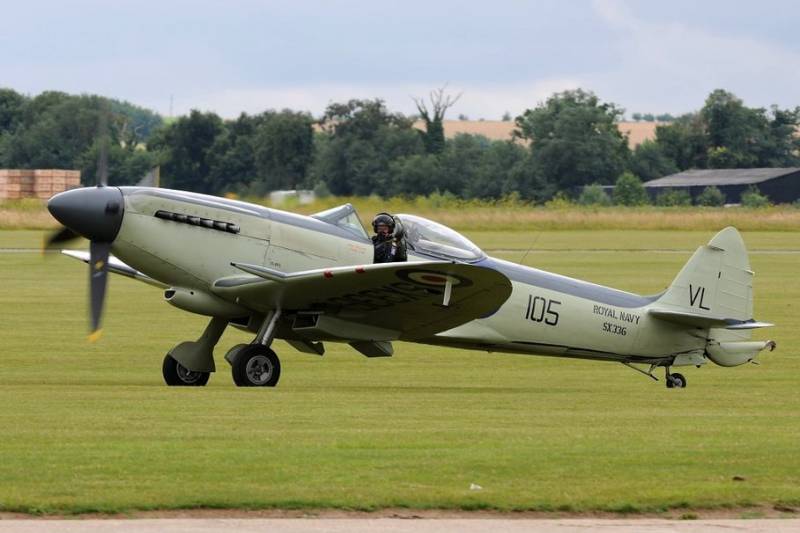 Double deck fighter-bomber and scout "Fairy" "Fairfly" began to develop in 1940 year, taking into account the developments and experience of its predecessor - the double fighter "Fairy" "Fulmar". In December, the deck fighter "Firefly" ("Firefly") made its first flight. However, the development of a new machine was strongly delayed, and the serial production of FairFly was only launched in January 1943.

In the first modification of F (FR) Mk.I, the Griffon engines with horsepower 1730 were initially installed, then they were replaced with more powerful 1990-strong ones. Firefly was not distinguished from its deck counterparts by the best speed characteristics. The maximum speed of the F (FR) Mk.I, the main belligerent modification, was at the height of 4270 m total 508 km per hour with a rate of climb (up to the height of 3050 m) 530 meters per minute. The fighter's flight range without outboard tanks was 1720 km, and the practical 8535 ceiling meters. 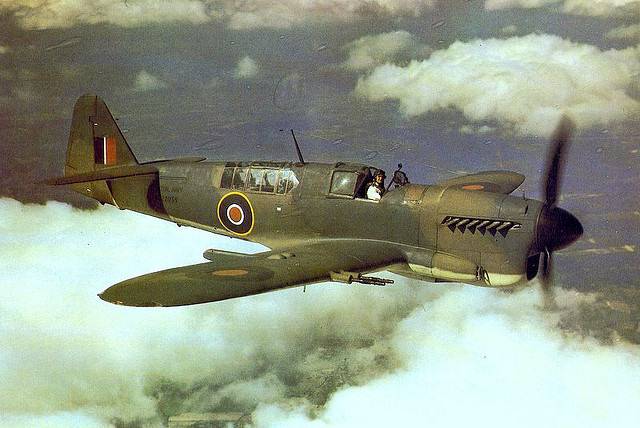 In the flight “Firefly” Mk.I of the first releases (there are no aerodynamic covers on the guns). (Photo site www.pinterest.com)

A special feature of the Firefly wing design was powerful, hydraulically actuated, Fairy-Youngman flaps, which were used not only for takeoff and landing, but also for conducting maneuverable air combat and fuel economy during long-haul flights. So, with the flaps extended to the middle position, the fighter on bends won against the lighter, well-known for its maneuverability, the Japanese A6М3 "Zero" due to a significantly smaller turning radius. However, despite good maneuverability, the British command considered it more appropriate to use the two-seater Fireflais as a long-distance escort fighter or as a night fighter (for this purpose, the AJ Mk.X radar was installed on the MK.X radar). 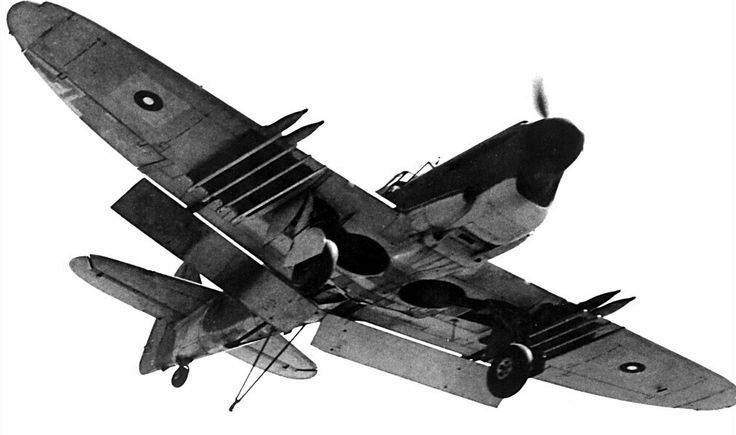 For the convenience of placing on the deck and in the hangars of aircraft carriers fighter received a folding wing. The procedure of folding the wing itself was rather time consuming and was performed by a team of at least 16 people. Folding wing panels turned along the fuselage. 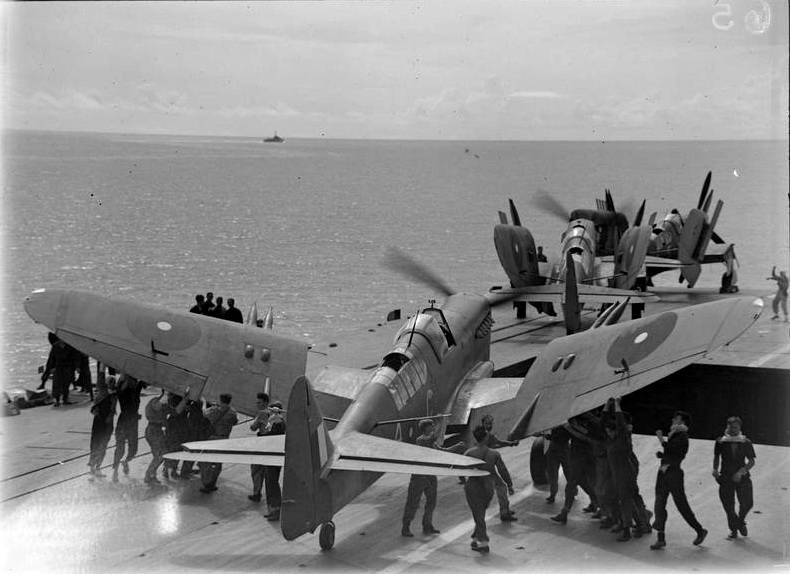 The Firefly pilot and radio observer were located in different cabins separated by a fuel tank. The pilot's seat had an armored backrest. In the tail boom housed inflatable rescue boats. To ensure landing on the aircraft carrier deck, the aircraft was equipped with an A-shaped brake hook. 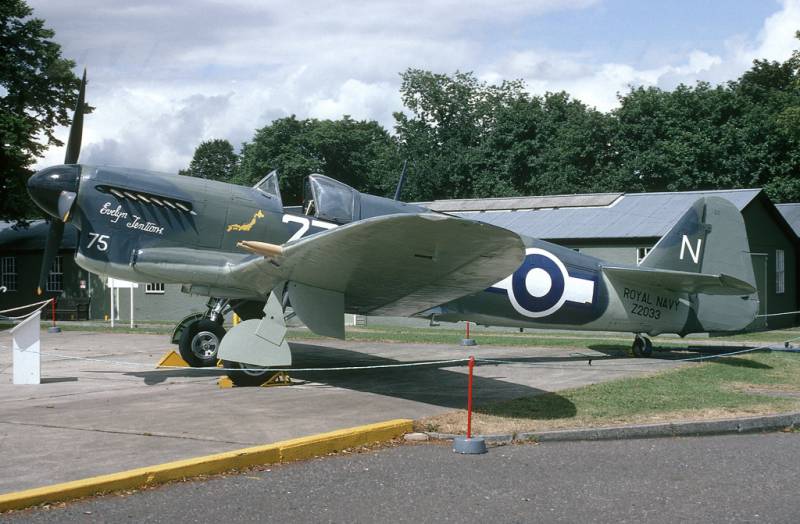 Firefly F (FR) Mk.I was armed with four 20-mm cannons mounted in the wing. The radio observer had no regular defensive armament (in practice he sometimes used personal weapons –7.62-mm submachine gun). Under the wings, two 454-kg bombs could be suspended, instead of bombs, additional fuel tanks dropped in flight were suspended instead of bombs. In addition, under each wing there were suspension units for four unguided 27-kg missiles. 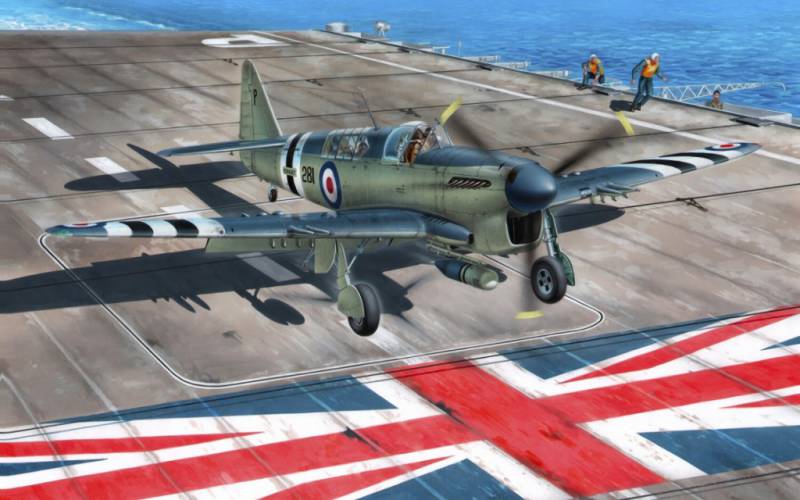 The Firefly FR Mk.I fighter with the ASH radar makes landing on the Triumph aircraft carrier, 1950 (Image of goodfon.ru)

The reconnaissance modification of the FR Mk.I was distinguished by the presence of a suspension container with ASH radar, and the night one - by the NF Mk.I container with an AI Mk.V radar.

In 1944, Fairy began the development of a modification of the fighter with the new Griffon engine with 2245 horsepower. Serial production of the new FR Mk.IV modification began in May 1945 of the year. The installation of a more powerful engine required to transfer the air intakes of the radiator from under the nose of the aircraft to the root parts of the wing, which led to the formation of peculiar projections that increased the total area of ​​the wing. To compensate for the decrease in the angular velocity of the roll, the wing tips were slightly trimmed, making them almost rectangular. 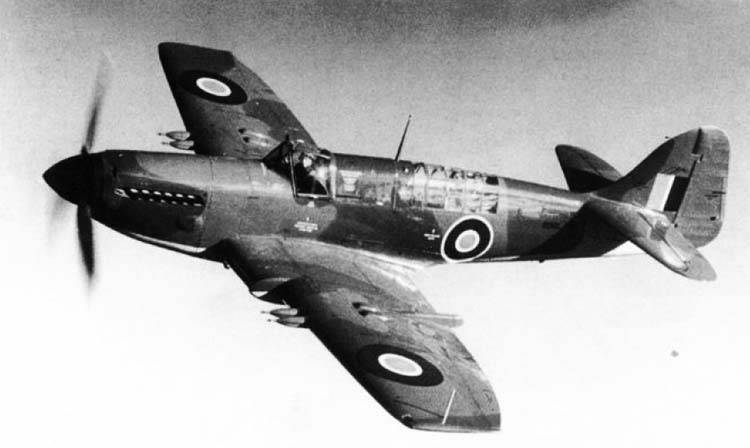 In flight, one of the first Firefly FR Mk.IV (the container with the radar is not yet installed). (Photo site static.warthunder.ru)

The maximum speed of the fighter at the height of 4270 m increased to 620 km per hour, however, the climb rate of the heavier machine dropped to 426 meters per minute.

A container with an ASH radar was installed in the right half of the wing, and an additional fuel tank was suspended under the left wing for symmetry. Armament modification FR Mk.IV remained the same. 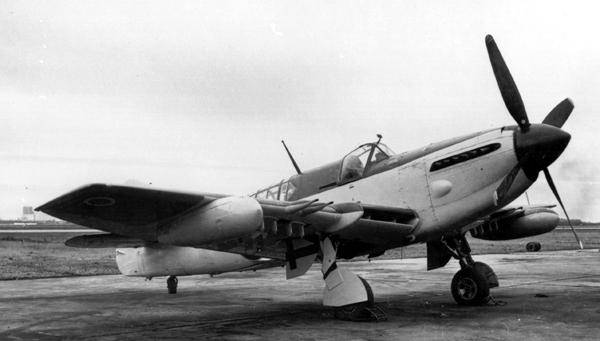 In open sources information about the combat use of FR Mk.IV is missing. This model served as the basis for the creation of post-war modifications of “Firefly”, which were produced before 1956. 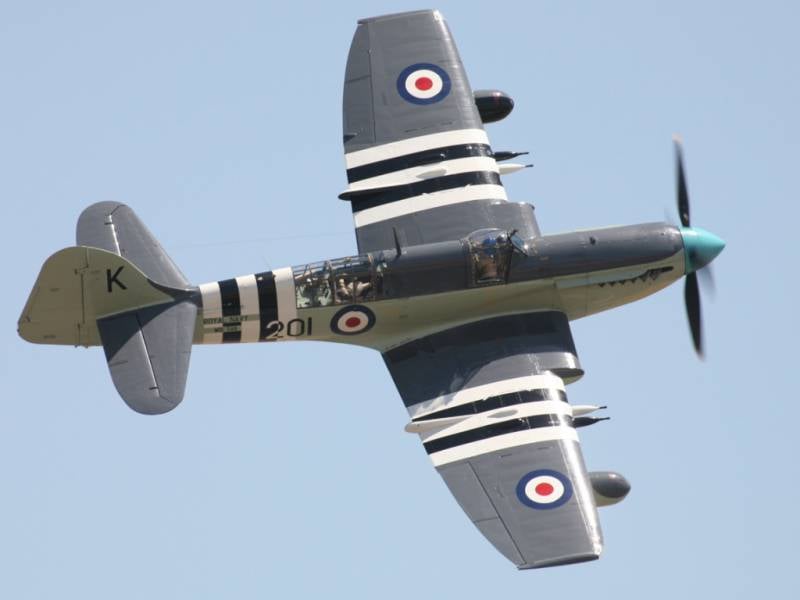 The first combat aviation squadron of the Firefly F (FR) Mk.I fighters went out in October 1943 of the year, and she received the baptism of fire off the coast of Norway only at the end of the summer 1944 of the year while hunting for the German battleship Tirpitz. The squadron was based on the carrier "Indefatigeybl" and dealt mainly with the support of the torpedoes "Barracuda" and armed with 454-kg bombs fighter "Corsair", incidentally striking the coastal air defense batteries.

In the Pacific, Firefly appeared in January 1945. In addition to accompanying strike aircraft, they themselves were actively used to strike ground targets of 454-kg with bombs and 27-kg of unguided rockets. 1 January 1945 fighters from Indefatigeybla struck a refinery on Sumart Island. A few days later, Firefly also scored the first air victory: shot down by a Japanese fighter Ki.43.

The Fireflakes from the Impactable aircraft carrier were the first Allied airplanes that struck 17 on July 1945 of the year on enemy airfields directly on the Japanese islands.

24 July 1945, a pair of Firefly fighter-bombers and six Avenger torpedo bombers attacked and heavily damaged the Japanese escort aircraft carrier Kayo in the Shido Van harbor (this was the first and only case of a British carrier-based attack on a Japanese aircraft carrier throughout the war) 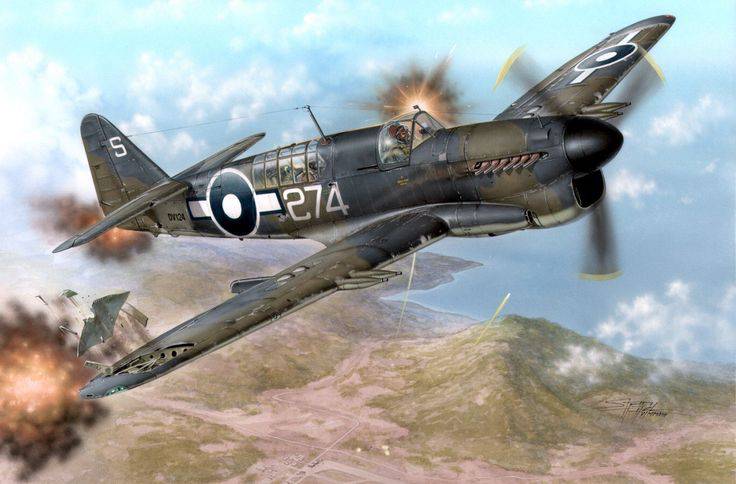 In general, at the final stage of the fighting in the Pacific Ocean, the Firefly F (FR) Mk.I fighter proved to be a good strike aircraft, and experienced pilots, using all the capabilities of the aircraft, waged air battles with enemy fighters on an equal footing.

The British carrier-based fighter "Martlet" MK.V and MK.VI, after the Grumman company closed down production at its Wildcat plants in 1942, were supplied under Lend-Lease by General Motors. Like their overseas counterparts FM-1 (F4F-4) and FM-2 (F4F-8), the British Marl left the decks of large aircraft carriers more modern fighters and settled on smaller escort (convoy) aircraft carriers. Their main task was the fight against enemy submarines and the killing of coastal targets in the course of fire support of the landing forces.

"Martlet" Mk.VI was the most successful modification of "Wildcat". The fighter received a more powerful 1350-strong engine. The maximum flight speed at an altitude of 8778 m was 534 km per hour, and the rate of climb was 702 meters per minute. At the same time, the flight range without outboard tanks increased to 1448 km, and the practical ceiling was 10577 meters. 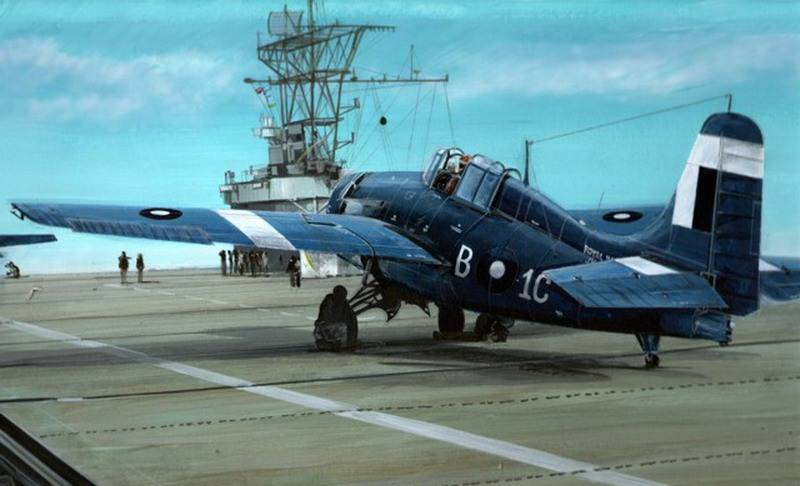 "Martlet" Mk.VI on the deck of an escort aircraft carrier. (Fig. Site umm-usa.com) 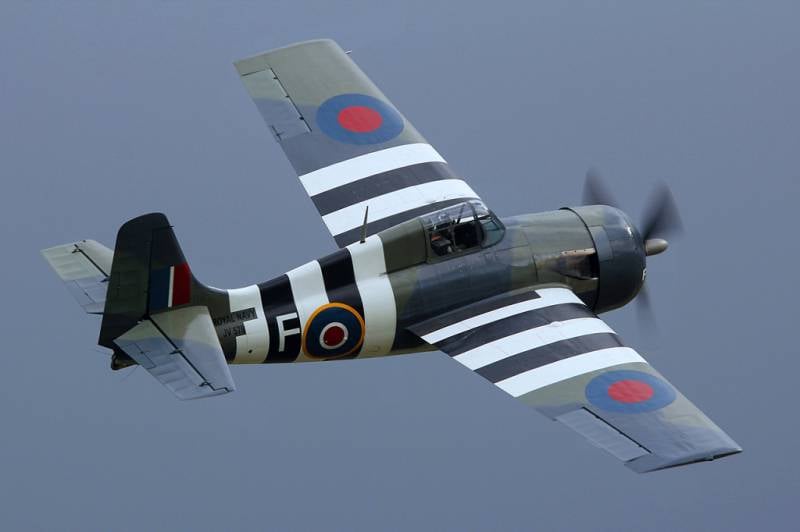 Having discovered an enemy submarine on patrol during surface patrols, the Martlet attacked it using large-caliber machine guns, bombs, or missiles. The fighter's attack was completed by the Avenger torpedo bomber armed with depth bombs. 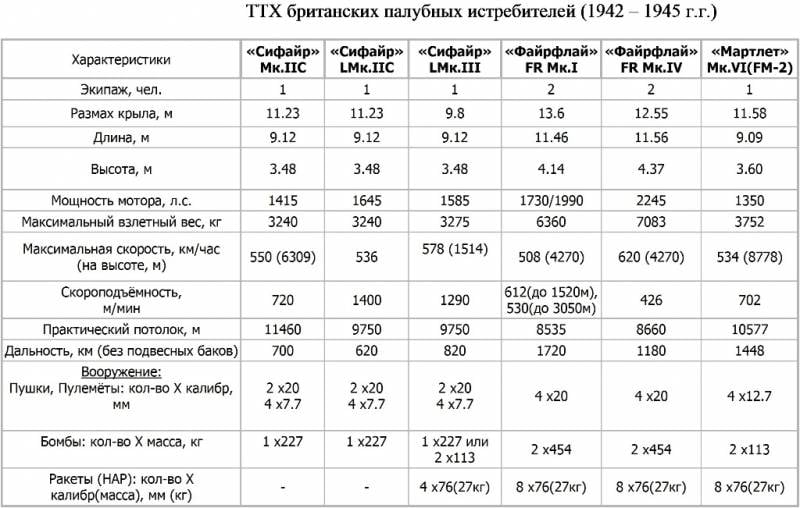