St. Petersburg as a field for experiments? Akhmat Kadyrov Bridge and a plate in memory of Karl Mannerheim

20 2016 June
282
In the past few days, St. Petersburg is not only the cultural, but also the media capital of Russia. And it's not just about holding the St. Petersburg International Economic Forum. The St. Petersburg media attention draws attention at least in connection with two more events that St. Petersburgers themselves and all Russians are witnessing today. Speech about the events, with the discussion of which "VO", perhaps, was somewhat delayed, however, if one can put it that way, having received a certain kind of impulse after the publication of one of the ex-deputies of the State Duma on the Facebook page, the degree of the topic is such that it is strange to postpone the discussion.


So, we are talking about: a) assigning the bridge across the Duderhof Canal by the governor of St. Petersburg Georgy Poltavchenko to the name of the first President of Chechnya Akhmat Kadyrov, b) the opening of a memorial plaque in honor of Karl Gustav Emil Mannerheim on the facade of the Military Academy of Material and Technical Support on Peter’s Street.

In order not to dump everything, it is worth making an attempt to understand the situation in stages. At first - that one of the bridges of the northern capital was named in honor of the first president of the Chechen Republic.

To get started is to submit a publication in Facebook the above-mentioned ex-deputy of the State Duma of the Russian Federation. Speech about Konstantin Rykov, the material of which caused a heated discussion on the Web (for reference: K. Rykov - general producer of the electronic publication “Vzglyad.ru”) (spelling, punctuation and stylistics of the author are preserved):

About Kadyrov's bridge I really wanted to write a few words. As having read the kamenty to my previous post, I realized that this topic had even broken through adequate people.

Personally, my opinion is that the renaming of streets, bridges and squares should be the responsibility of the deputies of the city duma. If they are for, then at least the square named after Hitler (of course not) open up. Our municipalities (as a rule) are random people ... and they should not be given such benefits. Chaos will begin.
Now to the point: All of you (who are against) are real hypocrites and victims of cheap liberal propaganda. Spit at me as you like, write any nasty things. On this issue .. I will stand until the end. Because the question is fundamental!

Who is Akhmat Kadyrov? This is a great man! Which was so historically reasonable that it found the strength to stop the war and abandon Jihad with Russia. This feat of his ... saved tens of thousands of lives on both sides. Maybe even hundreds of thousands or millions.

There is no Caucasus in the Russian Federation .. now it would not be. And Tatarstan would not exist. And Rostov and Krasnodar would be part of Poland, not even Ukraine. And about the Far East .. I generally keep quiet. There would be no modern Russia. Our Rashenka favorite.

If you do not understand this, then you are utter idiots or employees of Radio Liberty. Well .. or just kids.

And not because the Chechens would have captured everything. Of course not.

The war in Chechnya was a consequence of the collapse of the USSR and the escalation of the conflict .. would automatically spread further. In Dagestan, Ingushetia, Kabarda, Ossetia, Rostov and Krasnodar. And further, further, further ...

Was this bridge given to you? No one even knows where he is. Maybe it does not exist at all?

Here you are? Every day, walk on Lenin Street. Get down to the subway station Voikovskaya. Come to the alley Vasi Pupkin. Does it really bother you? Yes, you spit with a high bell tower .. who were these people.

And here! Suddenly! Has it become important to you?

"We will call the bridge Akhmatovsky" .. write right now to me in kamentah.

Aha Let's! In honor of whom only? Literature in the school did not read?
In honor of the main drug addict "Silver Age", which was dodged with cocaine, so that even forgot that her son .. Lev Nikolayevich Gumilev was put in a Stalinist gulag?

In short, stop fooling around. Turn on the brain.

If this is not a trolling of the 80 level, then strongly ... In principle, this is just one of the opinions that could have been completely ignored, but it turns out that if someone opposes the assignment of one or another geographical object names without taking into account the opinion of the majority (well, democracy also consists in this - even sovereign, at least some), then such a person can be called in one moment “a hypocrite and a victim of cheap liberal propaganda”. And about the “Hitler's Square”, which, if they want, it is possible for the deputies, then it’s possible, but it’s not like it’s necessary, the ex-parliamentarian goes too far behind all possible sticks. Declaring the role of Akhmat Kadyrov in the fact that Chechnya remained part of Russia (and this role really exists), the person immediately tries to give out, to put it mildly, a strange comparison - with that very hypothetical name square ... And if someone disagrees bite it, you are a hypocrite, a traitor and a victim of liberalism. Oh, how ...

No, it is, of course, clear that Akhmat Kadyrov is not the last person in the matter of preserving the Chechen Republic as part of Russia, but ... why Peter, why the bridge? .. Since we decided not to be interested in the opinions of the citizens of the country, then it was possible not interested in it to the end - to go much further - to rename some regional center or a single republic. Or still, the assignment of the name of the first president of the Chechen Republic to the bridge is a kind of balance between an attempt to make a gift to a well-known leader of the Russian region and geographical adequacy. There is an opinion that Akhmat-Khadzhi himself would be quite surprised by the decision of the St. Petersburg authorities and, given the scale of the personality, he would hardly have been pleased with the decision.

It seems that the decision itself of the St. Petersburg authorities fit into an attempt to feed the hamsters and once again including such posts as that of the respected Konstantin Rykov, to poison Russians with different views. But why? - the question ...

Much the same can be said about the memorial plaque in honor of Mannerheim on the facade of the military academy. And here is the question not only and not so much to the regional authorities. 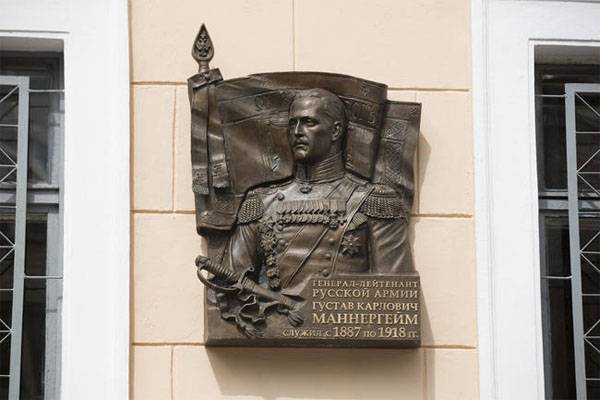 From the statement of the head of the presidential administration, Sergey Ivanov:
As the saying goes, you can't throw the words out of the song. No one is going to whitewash Mannerheim after 1918, but he served Russia until 1918, and if he was really frank, he lived and served in Russia longer than he served and lived in Finland.

And this statement of the Minister of Culture of the Russian Federation Vladimir Medinsky to cry out from the crowd “Shame!”:
You do not have to be holier than the Pope, and you don’t have to try to be a great patriot and a communist than Joseph Stalin, who personally defended Mannerheim.

Logic, of course, has the right to exist, but it is very slippery. By the same logic, the Ministry of Culture, it turns out, should immediately look for a place to open a plate in honor of Alfred Rosenberg, who was of Russian origin, one of the ideologists of the NSDAP, whose works were used when writing "Mein Kampf" Hitler. It is worth recalling that it was from Rosenberg's pen that the phrase “the final solution of the Jewish question” belongs. Why sign? Well, of course ... Rosenberg graduated from the Moscow Higher Technical School in 1918, receiving an engineering degree from an architect. Mannerheim - an ally of Hitler - is possible, but Rosenberg is impossible? .. 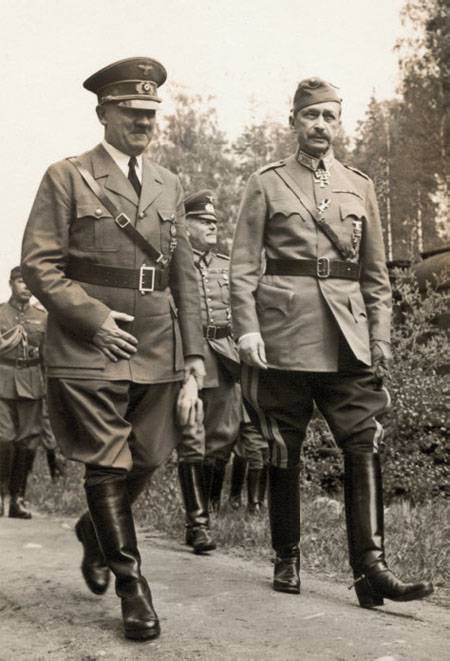 On the right is the very Mannerheim, the memorial plaque to which is open in St. Petersburg.

Wait, what about General Vlasov? By the same logic, it is urgent and in honor of him something to open and call ... It turns out that this is only "later" Vlasov began to cooperate with the Nazis and organized the ROA, and "before that" he was an "exemplary soldier". ..

Frankly, emotions are overwhelming. This is bad, we need a weighted, weighed ... And if weighed, the opening of the board in honor of the aforementioned Mannerheim occurred against the background that many of those who served the Russian (Soviet) Fatherland did not open any memorial plaques to the last drop of blood. Forgive generously, but the decision about St. Petersburg assignments and discoveries is very difficult to call provocation, taking into account the opinion of ordinary Petersburgers, who are also perplexed, wondering: “Why?!” ... - If to demonstrate historical cosmopolitanism, but against the background of marked selectivity to personalities, is there a threat to finally get confused in the approaches to stories and brew thick porridge, which, God forbid, will have to be eaten by descendants who will surely remember us with strong words ...

The reaction in St. Petersburg to the opening of the Mannerheim plate on the following day after the ceremony: 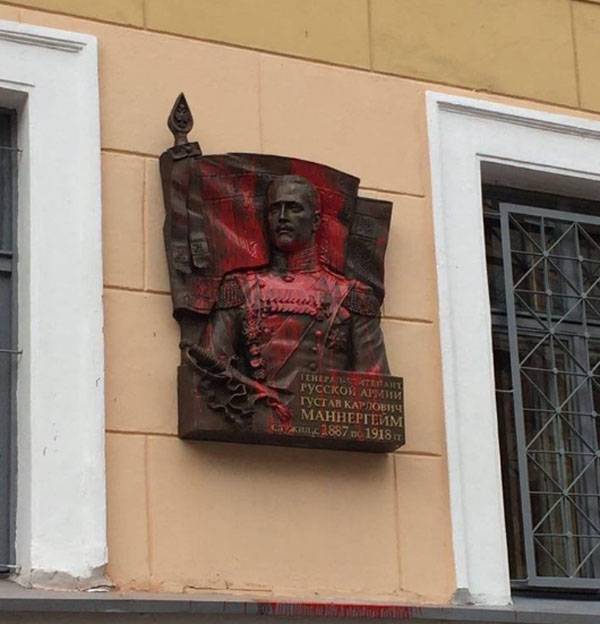 Ctrl Enter
Noticed oshЫbku Highlight text and press. Ctrl + Enter
We are
Results of the week. “Hey you crazy, stay!”Engineering Technologies-2012. The first days of the forum
Military Reviewin Yandex News
Military Reviewin Google News
282 comments
Information
Dear reader, to leave comments on the publication, you must sign in.