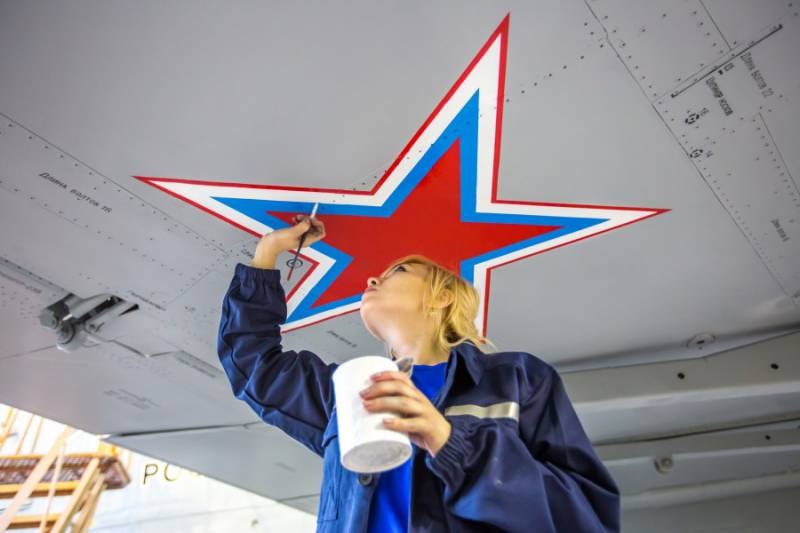 The Su ‑ 34 bomber is almost imperceptible against the sky and above the water surface. The technology of painting this aircraft, which is built at the Novosibirsk Aviation Plant. V.P. Chkalov (a branch of the company “Sukhoi”) solves the problem of anticorrosive protection of airplanes and its appearance.

Anticorrosive protection of the aircraft - a multifaceted and long-term process that begins with painting the skins in detail. The creation of "liveried" - "clothing", the appearance of the Su ‑ 34 - takes place in the paint shop NAZ them. V.P. Chkalov. Previously, the entire surface of the aircraft is washed with soapy water, then with a mixture of solvents, and then degreased. Next is the isolation of surfaces that are not subject to painting. The final painting takes place after the completion of all assembly work and the flight tests of the aircraft.

All painting work is carried out in a hangar equipped with supply and exhaust ventilation, at air temperature 12 – 35 ° С, relative humidity of air 35 – 75%.

Priming and painting of the lower and side surfaces of the aircraft are carried out using airless spraying installations, and coloring of the upper surfaces using a spray gun. The work is carried out according to a used pattern: the bottom and side surfaces of the machine are painted by two people, starting from the front to the tail, and the top of the product is four people. “It is pleasant to feel that I contribute to the creation of our combat pride along with other employees of the enterprise,” says the painting workshop master Vladimir Kochnev. - When the plane soars in the sky, I do not see on it either inscriptions or symbols to which I applied my hands, but I know that they are there. Then there is a sense of pride in their work, the work of our painters, their factory, for their country. ” 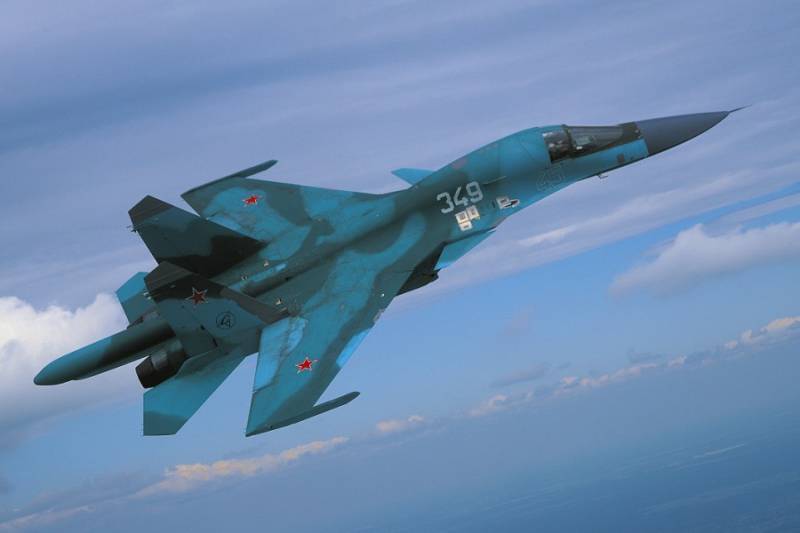 The Su-34 coloring scheme is defined by the design documentation agreed with the customer. Upon request, the scheme may be changed. At present, the Su ‑ 34 coloring scheme is a light blue color of the bottom, camouflage spots of turquoise shades on the top, white color of the nose fairing. The front edges of the airframe are painted in a light gray color, and the nacelle zones are enamelled in silver. This variant of coloring is also called “sea”, which allows the aircraft to be almost imperceptible.

The on-board information (technical inscriptions) is also included in the color scheme, it is applied with enamels of various colors through silk-screen printing stencils, which are made here in the paint shop. The same enamels of various colors use stencils on the self-adhesive film to identify marks, emblems, side numbers. In particular, the application of a sign of nationality - the star - is done as follows: the first stencil is glued, the background is applied in white, then the other two stencils are glued alternately, after which red and blue are applied. This is a very time-consuming, complex process, requiring artistic skill, the faithful hands of the performer.

All the final painting time is eight days, including interlayer drying of coatings. And the weight of used paints and varnishes - about 200 kg.

The thickness of the protective anti-corrosion coating is 60–90 microns. All primers and enamels used for painting the Su-34 are of domestic production, recommended by the All-Russian Research Institute aviation materials. According to painters, these materials have a number of advantages over some foreign analogues: they are easier to apply and dry faster. “Our experience has shown that the coatings are durable and reliable in operation,” comments Natalya Ivanova, senior supervisor of the paint shop. - There are no complaints about the Su-34 at the moment, and only time will check the quality. We do our best not to be ashamed of our work. The quality of painting of our combat aircraft is a merit of the entire team of the workshop. 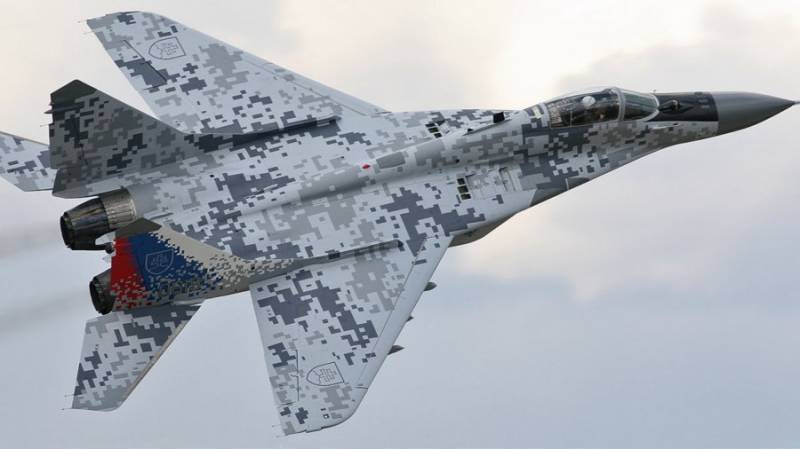 In the photo: the "digital" camouflage of the Slovak MiG-29AC
20 December 2007 from the hangar of the aircraft repair plant in Trencin rolled out the upgraded MiG ‑ 29AC number 0921, which was the first in the Slovak Air Force to receive a new, very original “digital” camouflage scheme - in the form of individual small square “pixels” of gray tones of two different shades along the upper surface glider, also having a gray color (a different tone).

The coloring of the first aircraft under the new scheme was the beginning of the final stage of the modernization program of the Slovak MiG ‑ 29. After the technical revision provided for by the contract, all 12 machines were repainted according to a new scheme.

Masking the object and “breaking” the silhouette lines is the task of any camouflage. However, according to the developers, the “right” pixel-points do this at different distances equally well. “Digital” coloring is called because it was really developed using a computer. And it is not just randomly scattered pixels. At different distances from the object, they form groups of spots of different sizes. This is due to the special perception of the eye pattern, divided into rectangular parts of the picture, as well as due to the lack of obvious color joints. Therefore, “digital” camouflage in theory more effectively breaks the symmetry of the outlines of an object, be it a man or military equipment.

True, for aircraft "digital" camouflage - rather a fad. Typically, the background for aircraft is the runway, parking cover or sky. Against the background of the earth in the dynamics of "digital" color does not work. Apparently, therefore, having painted the first MiG ‑ 29AS in classic “digital” camouflage, the customer already on the second copy (No. 0619) departed from the severity of such a “disguise”: his keel over the “pixel” coloring was additionally crowned with a “tricolor” in honor of 15 anniversary of the Slovak Air Force. 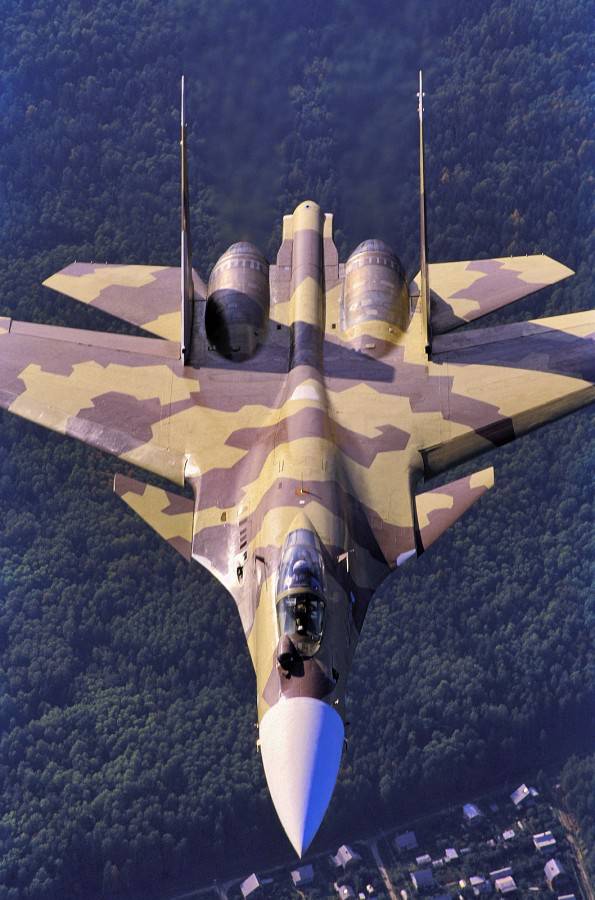 In the photo: The color of the 10M aircraft (tail number 711) in “sandy” colors.
In terms of the complication of visual observation in the world at the present time, there are two main approaches to the color of serial combat aircraft:

2. Warp coloring applied to varying background observation. The effect of the warp coloring is that each time a part of the stain stains merges for the observer with the changed background area. This is achieved by the distortion and unrecognizability of the remaining visible part of the shape and contours of the object. In the company's painting schemes
“Dry” found both of these approaches. Deforming paint is used on modern production aircraft of the Sukhoi Design Bureau, which are in service with the VKS and Russian Navy.

The color of the Su-27 family of fighters is optimized for observation on typical backgrounds in close combat, Su-33 ship-based fighters against the water surface, Su-34 fighter-bombers against the underlying surface at medium and high flight altitudes, Su-type attack aircraft 25 - on the background of the underlying surface when flying off the ground. Colors of enamels for coloring attack aircraft such as Su ‑ 25 are selected depending on the location of the intended base.

For the lower surface of the aircraft, monochromatic coloration is most often used to reduce the contrast of the aircraft when viewed against the sky.

The type and design of the paint scheme, the colors and brands of paint coatings used for airplanes supplied to a foreign customer are determined based on the wishes of the customer and approved during negotiations upon signing the contract. Often, the type and colors of the color scheme of the aircraft supplied are chosen by the customer in accordance with the similar designations adopted in his Air Force.

In the coloring of experimental aircraft of the Sukhoi company, a distorting paint was widely used, using broken lines as spots edges. Broken lines serve to distort the visible shape and contour of the aircraft and thus mislead the enemy in close combat. Such an approach was most developed in “fragmentation” color schemes for prototypes of the Su-35 and T-50 aircraft.

Often, the color schemes of experimental machines are chosen so as to maximize the interest of the potential customer. An example would be the coloring of an 10M aircraft tail number 711. The painting was made in "sandy" colors and was designed to attract the attention of customers from the Middle East. 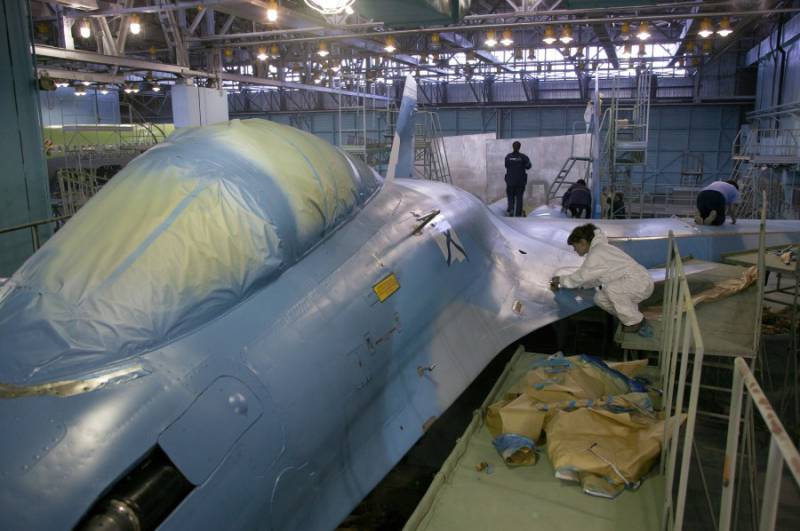 In the photo: Coloring of the Su-33 aircraft at the Komsomolsk-on-Amur Aviation Plant named after Yu. A. Gagarin.
The protective properties of coating systems, their durability and the appearance of the aircraft as a whole depend on the quality of the final painting. Currently, coating systems based on both domestic and imported enamels are used to paint Sukhoi production aircraft.

Currently, the company "Sukhoi" are working on the development of advanced coating systems. So, for prototypes of the fifth generation fighter T ‑ 50, radio absorbing materials developed by the Institute of Theoretical and Applied Electrodynamics of the Russian Academy of Sciences, heat-insulating enamel protecting the airframe surfaces from damage at high temperatures arising from the weaponry were tested and introduced.

The color of the aircraft is designed to protect against the effects of various environmental factors, as well as to reduce the optical visibility of the aircraft.

The main tasks solved in the development of paint schemes:

• types of coatings and areas of their application to the aircraft should be chosen so as to protect the aircraft from corrosion, the effects of aggressive environmental factors, erosion, temperature and other effects on the aircraft while maintaining the efficiency of all its systems;
• the color, shape, dimensions and locations of the identification marks of the nationality of the aircraft, its airborne and serial numbers, and other graphic information should be identified;
• for serial combat aircraft, the coloring should make it difficult to visually observe the aircraft in typical combat situations.
The color scheme depends on the type of aircraft, the tactics of its combat use, the intended home region, the characteristics of aircraft operation.