What makes the railgun a simple idea 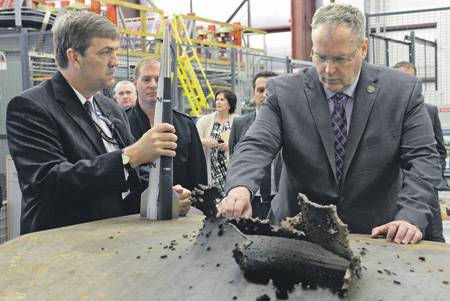 Our and foreign media are full of news about the new American super-weapon - the railgun (English “railgun” - “rail gun”). In the US, newspaper people call it the "Arrow of God."

Let's try to consistently understand the new product. Why cannon rail? Yes, because the barrel is absent in it, and the projectile moves along two metal rails, remotely resembling rails. The shell made conductive. During a powerful electromagnetic pulse, a large current flows through it, and the projectile heats up strongly. This completely eliminates the equipment of its conventional explosives, not to mention the nuclear warhead.

During the experiments in 2008 – 2016, the railgun model installations fired two- and three-kilogram shells. In a standard combat installation, it is supposed to fire 9 kg shells at speeds that are 6 – 7 times the speed of sound, at a distance of 450 – 500 km.

Thus, the railgun is a semblance of a smooth-bore cannon from the time of Ivan the Terrible, firing a solid-cast core. The only difference is that the speed of the projectile increased 10 – 20 times. As in the XVI century, to hit the foe from a similar weapons, requires only direct hit.

I deliberately omit, as not being of interest to a wide reader, the numerous technical problems associated with the creation of rail tools. Among them, an important place is occupied by the survivability of the installation (excessive heating, erosion of rails, etc.). It is curious how a tungsten projectile heated to several thousand degrees behaves when it hits the stratosphere at an altitude of 25 and over kilometers, where the temperature reaches minus 50 – 100 degrees Celsius. And tungsten, I note, is a very fragile metal.

I will dwell on the fact that it is most striking - on the accuracy of firing a railgun projectile at a range of 400 and more than kilometers. It seems that the Pentagon is leading by the nose of American politicians and the public. Have they forgotten that there is such a thing as an atmosphere?

I will give two simple examples. At the end of the 1930-s in the USSR, the 12,7-mm DShK machine gun was adopted, firing a 48,2 g bullet at a speed of 840 m / s. According to the 1938 firing tables of the year, the DShK's maximum range was 4 km, and in the same year 1946 table, the firing range decreased by half - to 2 km. What, ammo worsened? No, both in 1938 and 1946, the DShK bullets flew over a distance of over 6 km. But it was the so-called ballistic range, when the bullet flew at low speed and tumbled in flight. So shooting at DShK at a distance of more than 2 km was absolutely useless, as they say, in white light - like a pretty penny. But it came to our military only in 1946.

The second example. A modern anti-tank sabot weighing 5,9 kg and with an initial speed of about 2000 m / s has a tabular range of about 2 km. Further, it simply does not fall into the tank, although this projectile is equipped to stabilize with wings that open in flight.

For the beautiful ladies I will explain in two more examples. In World War I, pilots at the heights of 300 – 400 used their hands to catch rifle bullets fired from the ground. And during the battle of Borodino, one Russian general was sitting at a table in a tent, when a lung (3 or 4 pound) core flew into the stomach and hit him in the stomach. The general got off with a bruise and did not lose working capacity. And the uniform remained intact!

Americans boast that the installation of the railgun will be "equipped with a GPS-corrector, which will not allow the projectile to deviate from the aiming point by more than 5 m at a distance of 400 km." But in general, the navigator is on the gun, and not on the projectile. It all seems unscientific fiction ...

Much more interest is the alleged carrier of the railgun destroyer Zamvolt. Its standard displacement is 14 564 t, and the full one will reach 18 thousand tons. According to the Pentagon’s plans, by the 2020 – 2025 years, Zamvolt destroyers will be equipped with a pair of rail guns. In the meantime, their main caliber - two 155-mm artillery mounts (AU) AGS.

Tests of this gun began in October 2001 of the year. 31 August 2005, a module of eight shells was fired in 45 seconds, that is, the rate of fire was 10,7 shot per minute. The AGS small-scale production was launched in 2010 year. The length of the gun barrel - 62 caliber. The barrel has a water cooling system. Charging separately-sleeve. The elevation angle + 70 ±, which allows firing at anti-aircraft targets. Especially for AGS, an active-missile projectile LRLAP of length 2,24 m, that is, 11 caliber, was created. The weight of the projectile - 102 kg, of which the explosive accounts for 11 kg, that is, 7,27%. Circular probable deviation of the projectile, depending on the range is from 20 to 50 m. The cost of the projectile 35 thousand dollars. The firing range of the projectile LRLAP - 154 km. If necessary, the AGS installation can shoot with a conventional 155-mm projectile, but at the same time the range is reduced to 40 km.

As a result, we find that the 155-mm classic destroyer artillery mount is its real and formidable weapon, unlike the semi-fantastic rail cannon. In my opinion, AGS in the near future will make a revolution in naval artillery. The lead destroyer DDG-1000 Zamvol entered service in May 2016, and the other two - DDG-1001 and DDG-1002 - are in a high degree of readiness.

Well, what are the average caliber AU we have? Now (as of June 2016), the frigate “Admiral Gorshkov” of the 23350 project, armed with the 130-mm Armata A-192M artillery unit, is just being tested. In the second half of the 1980-s, the development of the X-NUMX-mm single-armed A-130-Armata turret automated complex A-192-192-5 began at Arsenal Design Bureau. The ballistic data and the rate of fire of the new installation remained unchanged compared with the AK-10. The weight of the artillery was reduced to 130 t. The new unit’s radar system, Puma, was to control the installation’s fire. In ammunition supposed to include at least two guided projectile - "Crossbow-24" and "Aurora".

In 1991, at the Rzhevka training ground, 98 was fired from the Armata installation, and it was planned to conduct state tests in 1992. However, the collapse of the USSR buried "Anchar" and other projects of ships with new guns, and work on the A-192M was mothballed. Shooting from A-192M at Rzhevka was resumed only in 2011 year. Meanwhile, in Brezhnev times, unique ship-mounted artillery systems were designed, exceeding in their power by an order of magnitude both the 130-mm A-192M and the American 155-mm AGS.

In 1983 – 1984, a project of a truly fantastic instrument was developed. Imagine a ship, in the bow of which vertically sticks a certain pipe with a height of 4,9 m and a thickness of about half a meter. Suddenly the pipe leans in and crashes out of it ... whatever! No, I'm not joking. For example, our ship is attacked by an airplane or a cruise missile, and the installation launches an anti-aircraft missile. Somewhere over the horizon an enemy ship was found, and a cruise missile was flying out of a pipe at a distance of up to 250 km. A submarine appeared, and a projectile bursts out of the pipe, which, after landing, becomes a depth charge bomb with a special charge. It is required to support the troops with fire - and 110-kilogram shells are already flying at a distance of 42 km. But the enemy sat down near the coast in concrete forts or sturdy stone buildings. 406-mm heavy-duty high-explosive shells of 1,2 tonnes, capable of destroying the target at a distance of up to 10 km, are immediately applied to it.

What is the highlight of this gun? The main feature of the installation was the limitation of the descent angle to 30 ±, which made it possible to deepen the axles of the trunnions below the deck by 500 mm and to exclude the tower from the design. The swinging part is placed under the combat table and passes through the embrasure of the dome.

Due to the low (howitzer) ballistics, the thickness of the barrel walls is reduced. Barrel lined with muzzle brake. Charging was carried out at an elevation angle of 90 ± directly from the cellar with an “elevator ram” located coaxially of the rotating part. The shot consisted of ammunition (projectile or rocket) and a pallet in which the propelling charge was located. The pan for all types of ammunition was the same. He moved along with the ammunition along the bore and separated after departure from the canal. All operations on submission and shipment were made automatically. The design of this super versatile cannon was very interesting and original, but the leadership resolution did not differ in originality: the caliber 406 mm is not provided for by the standards of the Russian Navy.

INSTEAD OF THE SEA - SPACE DALIES

In the middle of the 1970-ies began designing the 203-mm shipboard installation "Pion-M" (not to be confused with the ACS "Pion-M", 2С7М, obtained in 1983 by upgrading 2С7!) On the basis of the swinging part of the 203-mm 2X44X gun "Pion". This was the Soviet response to the American 203 mm pilot unit Mk 71. Even the number of ready-to-fire ammunition for both systems was the same - 75 shots are separate-sleeve loading. However, the Pion’s rate of fire was higher than the Mk 71. The Piona-M shooting control system was a modification of the Lion system for AK-130. In 1976 – 1979, the Navy’s leadership sent several fairly reasoned justifications for the advantages of the 203-mm gun. For example, the size of the high-explosive projectile funnel from AK-130 was 1,6 m, and that of the Pion-M - 3,2 m.

203-mm active-reactive, cluster and guided projectiles had incomparably greater capabilities compared to 130 caliber mm. So, the Pion-M active-missile projectile had a range of 50 km.

Or maybe Khrushchev and his admirals were right that after the end of the Second World War, guns of caliber over 127-130 mm the fleet Not needed? Alas, all local wars have refuted this claim. According to the unchallenged claims of the American admirals, the 406 mm guns of American battleships were the most effective naval weapons of the Korean, Vietnamese and Lebanese wars. With the emergence of serious local conflicts, the Yankees de-mothbalized and modernized their battleships of the Iowa type and actively used them to shell enemy coastal targets. The last time a 406 mm Missouri battleship gun fired on Iraq in 1991.

But back to the rail guns. I repeat, the “Arrow of God” is the ideal system to “breed as grandmothers” American congressmen, who do not know much about physics and military equipment.

And here I put not a point, but a comma. The fact is that all the problems of the railgun sea or land installation automatically disappear ... in space. The “arrow of God”, in my opinion, is a very promising space weapon. In space, there is no atmosphere and no dispersion. And a projectile weighing even in 50 g can indeed have a circular probable deviation in 5 m at a distance not only in 400, but even in 1000 km. A projectile weighing 50 g is guaranteed to destroy any spacecraft, including a manned station of the ISS type.

But the rail installation cannot shoot at ground targets from space. Although ... let's fantasize. In near space, there are enough fireballs and asteroids with a mass from 100 to 10 thousand tons. With the help of a railgun installed in a spacecraft in Earth orbit, with a few shots you can correct the trajectory of a mini-asteroid. Well, the destruction on earth from the fall of this “mini” will be equivalent to an explosion of tens or even hundreds of hydrogen bombs.

Ctrl Enter
Noticed oshЫbku Highlight text and press. Ctrl + Enter
We are
The US Navy thinks of a railgun and a laser gunRailgun predecessors
Military Reviewin Yandex News
Military Reviewin Google News
185 comments
Information
Dear reader, to leave comments on the publication, you must sign in.