NATO has a version of why Russia has ceased to "interfere" with its teachings. 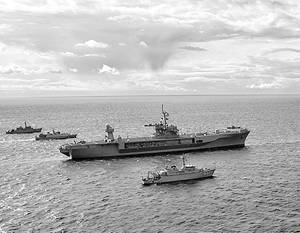 6th Command fleet The United States, represented by Vice Admiral James Foggo, stated that there was no serious activity of the Russian Navy and VKS in the Baltic during the exercises of NATO forces and Sweden and Finland that joined them. Moreover, NATO has its own version of what exactly “reassured” Russia. And the fact that this version is wrong is just one of the bad News for NATO.


Last year, according to Foggo, Russia actively interfered with the teachings of BALTOPS with its warships. And now it has ceased. The admiral also mentioned the acclaimed April incident with the destroyer Donald Cook in the same Baltic when the Russian bomber flew over it at low altitude, sowing panic and chaos, the consequences of which still affect the 6 fleet.

According to the British Rear Admiral Patrick McElpine, who served in the royal fleet 34 of the year and loves to remind you of this, “I haven’t seen any exercises during which I’d ​​not watch us during my entire service”. At the same time, McElpine specifically stressed that before the start of the exercise, the Russian fleet conducted special training in the Kaliningrad zone for ten days. And this is an important detail.
Admiral Foggo has an original explanation for the similar passivity of the Russian fleet and aviation. At a press conference aboard his flagship, Mount Whitney’s headquarters landing ship, he said that Moscow had abandoned the “tactical reaction” and moved on to strategic responses. As an example, the talks in Moscow of the Foreign Ministers of the Russian Federation and Finland were mentioned, which coincided in time with the start of NATO exercises at the Hanko Peninsula. On the other hand, the Russian army responded with another surprise check, which in Brussels is linked to the Anaconda 2016 exercises in Poland and the Baltic states. The military attaches of the embassies of the countries concerned were notified of this sudden check, which made Admiral Foggo very happy. He praised the actions of the Russian side, calling them "a step towards openness." Diplomatic measures are always more effective than a demonstration of force, ”said the commander of the shock naval group at a press conference on the conduct of exercises with the development of offensive operations and sea landing. And they applauded him.

But one of the most remarkable moments in the commander’s speech was the explanation of the direct, and not the strategic reason why the Russian side decided not to irritate the NATO sailors. It turns out that Rear Admiral Kataol O'Connor, a senior adviser to Admiral Foggo, flew to Moscow last week to discuss the security issues of the exercises. And now Foggo argues that it was this mission and the accompanying negotiations that allowed it to "relieve tension" around NATO exercises in the Baltic.

Under the sunset of a career, many American admirals and generals are awakened by a penchant for diplomacy. And for some time colonels of the marines with shaved heads touched en masse in the sphere of international relations. So Admiral Foggo could not miss such a convenient way to advertise his achievements. But if the commander of the US 6 fleet has some potential for regional diplomacy (for example, he can yell at some Estonian colonel, or even ruin his life), then he’s definitely not able to determine the strategy and tactics of the Russian Baltic Fleet can. Most likely, the admiral, for obvious reasons, somewhat exaggerated the powers and, as a result, the result of the "O'Connor mission." NATO and the United States were obliged to notify the Russian side of the plan, the nature of the exercises and the area of ​​their conduct through the naval attache. In the course of this routine protocol communication, security issues were apparently discussed. But no one gave NATO sailors any guarantees.

At such exercises, of course, there is always something to see. There are lots of details that can be useful for general education. For example, codes that NATO members exchange with the “Nenatovs” - the Finns and the Swedes. Interest in military doctrines has always existed - and will continue to exist. It’s another thing that one could draw from the rather strange in terms of organization and nature of the tasks of the NATO exercises in the Baltic States.

Particularly noteworthy is the development by NATO naval forces of counteracting what is called the Anti-Access / Area-Denial operations in Brussels, and thus the creation of “A2 / AD fortresses”. Speaking in a generally accessible language, NATO is concerned about the deployment of coastal radars, anti-ship missile systems, new submarines and mines in the Kaliningrad region and in the Crimea. Moreover, Admiral Foggo for some reason called all this, including submarines, “elements of a hybrid war,” but the youthful admiral, who requires his subordinates to be called Jamie, is forgivable.

After the transformation of Kaliningrad and the Crimea into such “coastal fortresses”, the Eastern Baltic and a significant part of the Black Sea are virtually closed to access by NATO forces, lost to the western navy. In such conditions, it is possible to annually conduct about a dozen of such exercises, attracting even the Finns, even the Swedes, even the fighting seals - all landing attempts will be Sisyphean labor, like the ancient naval form of mockery at the newcomers - to force the anchor to grind. None of the landing ship to the coast even close.

All available means of processing public opinion and satellites are gradually connecting to the fight against the Russian “coastal fortresses”. Now the team of Romania came out on the treadmill, which was suddenly interested in the “danger of coastal fortresses of Russia” for world navigation, freedom of movement and even the ecology of the Black Sea. The next ones at the start are the Poles who are concerned about the problems of commercial shipping in the neutral waters of the Baltic. And it was American Vice Admiral Jamie Foggo, along with British Rear Admiral Patrick “Paddy” McElpine, who explained to the concerned public that the NATO fleet must ensure the freedom of commercial shipping in the Baltic and Black Sea and “disavow anyone’s attempts to ban access to these regions ".

But how exactly to “disavow” is not invented by NATO. So far, the alliance has gone on a symmetrical path, imitating the mass production of mines in the Kaliningrad region, which, according to the idea, should stop Russian submarines. To this end, three strategic bombers B-52 flew to the UK from the United States - carriers of the nuclear weaponswho worked exactly this task. And this, among other things, is also the training of coordination of the Strategic Command and the fleet in the conditions of a puddle (that is, the Baltic Sea). And if attracting armies of puppet countries like Estonia, Latvia and Lithuania to specially designed exercises for them is just an attempt to calm their heated minds, then putting into operation of strategic bombers really shows how much the United States and NATO are concerned about the loss of a whole maritime region.

If in Brussels and the Pentagon they seriously believe in the “Russian threat to the Baltic countries”, they cannot but understand that they no longer have the capabilities of a naval assault from the Baltic. There is not even a chance to quickly transfer the naval forces. Accordingly, there is no need to closely observe these artistic productions of the young spectator’s Kohtla-Yarva theater. Especially there is no point in disturbing and annoying those who are prone to hysterics. That is, it is necessary to look after them, of course, but two reconnaissance ships, which the admiral Foggo personally saw with the keen eye of the sea wolf, and another two or three “fishermen” that he did not notice, are quite enough.