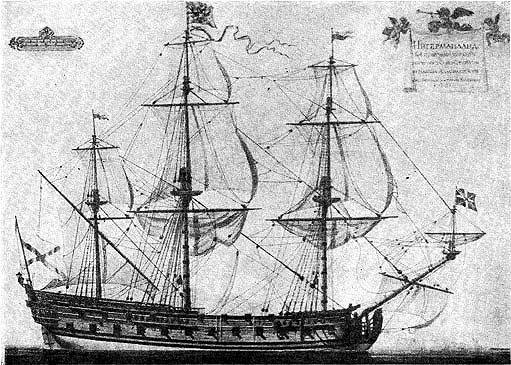 This 64-gun ship of the line is considered to be the quintessence of the shipbuilding of the era of Peter I. By the time it was laid, Russia had already gained considerable experience in construction, but the number of guns on battleships did not exceed 60. When the Ingermanland was built, this line was broken - 64 guns were installed on it.

The ship was designed personally by Peter I, who introduced a number of new products in his design: the absence of traditional high stern ships for earlier ships, an improved design of the keel, fore and mainmast with a third row of straight sails (forts and mainways bramsiel).

The ship was laid in 1712 year. He received the name in honor of Ingermanlandia, recently conquered from Sweden, on whose lands St. Petersburg is located. The direct supervisor of the construction was the British shipmaster Richard Cosenz, who was accepted by Peter to serve in Russia.

"Ingermanland" became the first Russian ship, which showed high speed and good seaworthiness. The sovereign liked the ship so much that for several years he kept his flag on it. That was the case in 1716, when Peter I personally led the combined Anglo-Dutch-Danish-Russian squadron on an expedition to Bornholm, and also in 1719, when the Baltic fleet approached Stockholm directly.

In memory of the glorious campaigns, the sovereign ordered: "To keep [" Ingermanland "] for memory." Since 1725, the ship in the sea no longer went out, its hull was gradually rotten and began to fill with water, as a result of which, in 1738, Ingermanland ran aground in Kronstadt harbor. Soon he was dismantled for firewood.

A well-designed design by Peter I with minor modifications was repeated in Russian navy almost until the end of the XVIII century. 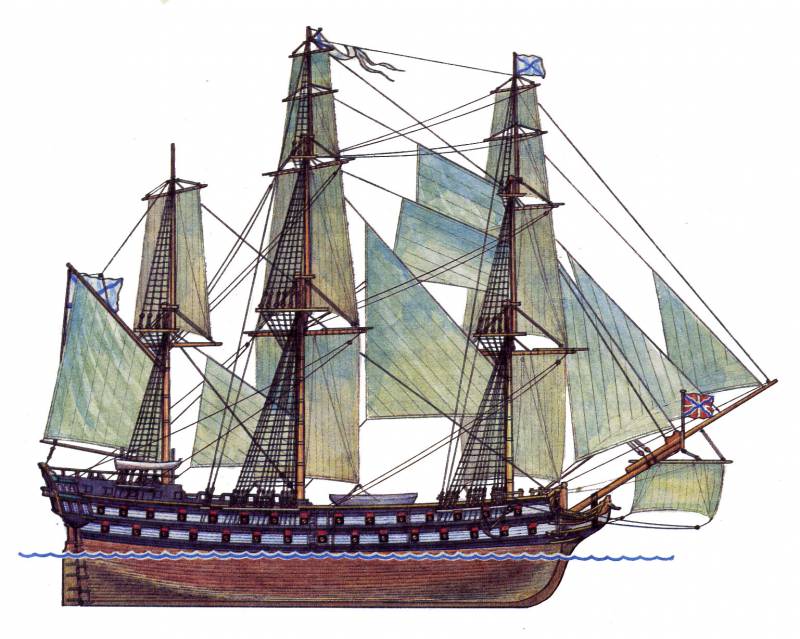 84-gun battleship "St. Paul" laid in Nikolaev in 1791 year. The drawings were developed by the ship engineer Semyon Afanasyev by order of Grigory Potemkin. In 1795, the ship moved to Sevastopol. From 30 April to 3 May 1798, together with the battleships Zachary and Elizabeth, Saint Peter, Holy Trinity, and the Epiphany of the Lord, participated in the comparative tests conducted by Paul I, but showed far from the best result. However, it was “Saint Paul” who entered history naval art, as the famous naval commander Fyodor Ushakov kept his flag on it during the assault on Corfu fortress in 1799 year.

Russia at that time was part of a coalition of European countries that had fought with France, so the Black Sea squadron of six ships of the line, seven frigates and three brigs with troops on board under the command of FF, who had already become famous by that time, went to the Mediterranean Sea. Ushakov. After the passage of the straits, it was now joined by the Allied Turkish forces consisting of four battleships and six frigates.
Soon the admiral set about freeing the Ionian islands occupied by France. The main stronghold of the enemy was the impregnable fortress of Corfu, armed with 650 guns and a garrison of military personnel in 3000. Food stocks allowed to withstand a six-month siege.

Operation against Corfu F.F. Ushakov decided to launch a swift attack covering the entrance to the harbor of Vido Island, which the Russian troops, supported by naval artillery, had mastered during several hours. Not giving the French respite, the second landing immediately captured two forts directly on Corfu, which seriously demoralized the enemy. 20 February 1799 of the year on board the "St. Paul" was signed by the surrender of the French fortress. Such workshops of Fyodor Ushakov deserve the enthusiastic response of the great Alexander Suvorov, who wrote: “Hurray! Russian fleet! I now say to myself: why I was not at Corfu even though a midshipman? ” The inhabitants of the island, grateful for their release, presented the admiral with a diamond decorated with diamonds.

25 July “St. Paul” left Corfu for Italian Messina for joint operations with the British fleet, and on October 26 the following year, he returned to Sevastopol. 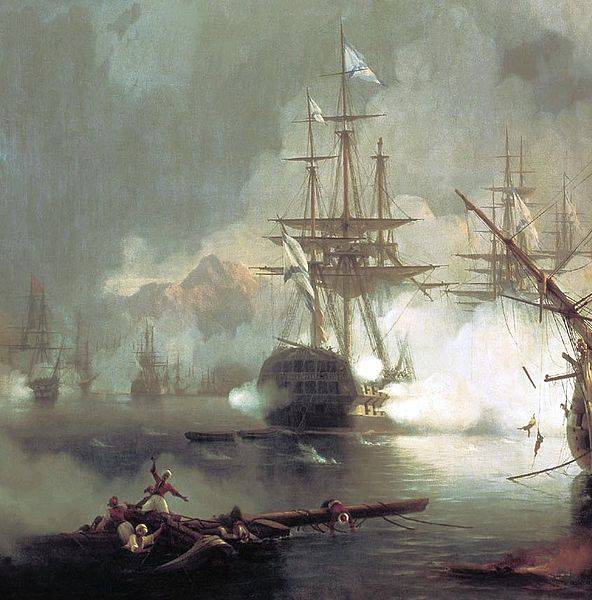 74-gun ship of the line "Azov" laid in October 1825, at the Solombalsk shipyard in Arkhangelsk. Officially, the builder of the ship was considered the famous master Andrei Kurochkin, but by that time he was already an elderly person, and in fact, Vasily Yershov later also supervised the work. The project turned out to be so good that according to it, in Russian shipyards in 1826 – 1836, 15 of the same type ships were built.
Before the construction was completed, the Azov commander appointed a famous Russian navigator, the discoverer of Antarctica and the future commander of the Black Sea Fleet, captain of the 1 rank Mikhail Lazarev. Future heroes of the defense of Sevastopol were also included in the crew: Lieutenant Pavel Nakhimov, Warrant Officer Vladimir Kornilov and Midshipman Vladimir Istomin.

In August-September 1826, the ship moved from Arkhangelsk to Kronstadt and soon, as part of the combined Anglo-French-Russian squadron, went to the Mediterranean Sea to assist Greece in the fight against the Turkish conquerors. October 20 The 1827 of the year hosted the Battle of Navarino, during which Azov fought five enemy ships. The heroic crew sank three frigates, one corvette and forced the Turkish flagship Muharem Bay to be thrown ashore.

But the victory was not cheap. During the battle on the Azov, all the masts and branches were broken, 153 counted holes in the hull (seven of them are below the waterline). The crew’s casualties were 24 killed and 67 injured.

By the decree of Emperor Nicholas I of 17 (December 29) 1827, for the first time in the history of the Russian fleet, the stern admiral George's flag was granted to the Azov "in honor of the commendable deeds of officers, courage and fearlessness of officers and courage of the lower ranks". It was also prescribed to always have the “Memory of Azov” ship in the fleet. The original Azov flag is currently on display at the Central Naval Museum. 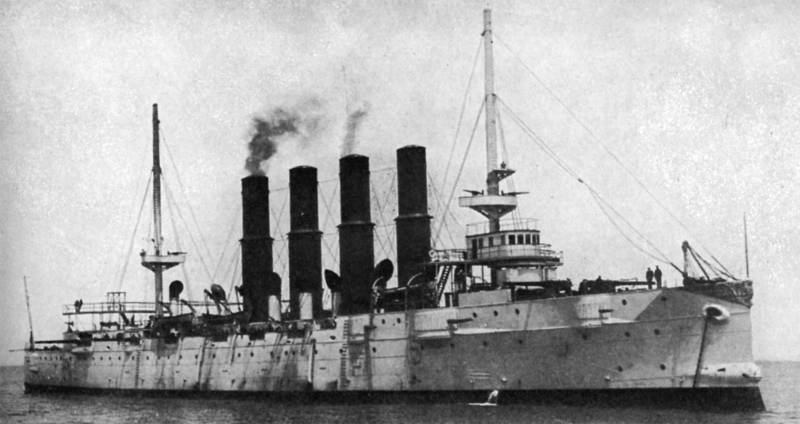 The XVUMX-grade Varyag armored cruiser was built in Philadelphia at the Crump and Sons shipyard. In 1, the St. Andrew's flag was raised on the ship. The cruiser turned out to be exceptionally beautiful and amazed contemporaries with perfection of proportions. In addition, during its construction many technical innovations were used: most of the mechanisms, including even the mixer in the bakery, received electric drives, installed telephone sets in almost all offices. To reduce the risk of fire all the furniture is made of metal. Varyag could develop a 1901 node speed high enough for its class.

Shortly after entry into service, the cruiser moved to Port Arthur. From the beginning of January 1904, he and the Koreyan gunboat were located in the neutral Korean port of Chemulpo at the disposal of the Russian embassy in Seoul. On February 8, a Japanese squadron under the command of Rear Admiral Sotokichi Uriu blocked the port and began to land. The next day, Varyag commander Vsevolod Rudnev received an ultimatum from the Japanese to leave the port, otherwise they threatened to attack the Russian ships right on the roadstead. The Russians decided to go to sea and try to break through to Port Arthur. However, passing close the fairway, "Varyag" could not use its main advantage - speed.

The fight lasted about an hour. The Japanese fired a total of 419 shells on Russian ships. The loss of the Varyag crew amounted to 130 people, including 33 killed. By the end of the battle, the cruiser had almost completely exhausted the ability to resist due to the failure of a significant number of guns, damage to the steering gears and the presence of several underwater holes that could not be corrected on its own. The crew was brought to neutral ships, and the cruiser, in order to avoid capture by the Japanese, flooded, opening the Kingston. Delighted by the feat of the Russian sailors, the Japanese government opened in Seoul a museum in memory of the heroes of the Varyag and awarded VF Rudnev Order of the Rising Sun. Returning to Russia, the crew members of the Varyag and Koreans met a triumphal reception.

In 1905, the Japanese raised the “Varyag” and introduced it into their fleet under the name “Soya”. In 1916, Russia bought it out, incorporating the Arctic Ocean flotilla. In February 1917 of the year, Varyag went to the UK for repairs. After the Soviet government refused to pay the tsar's debts, the British confiscated the ship and sold it for scrap. When towing for break-up in 1925, the Varyag sank in the Irish Sea. 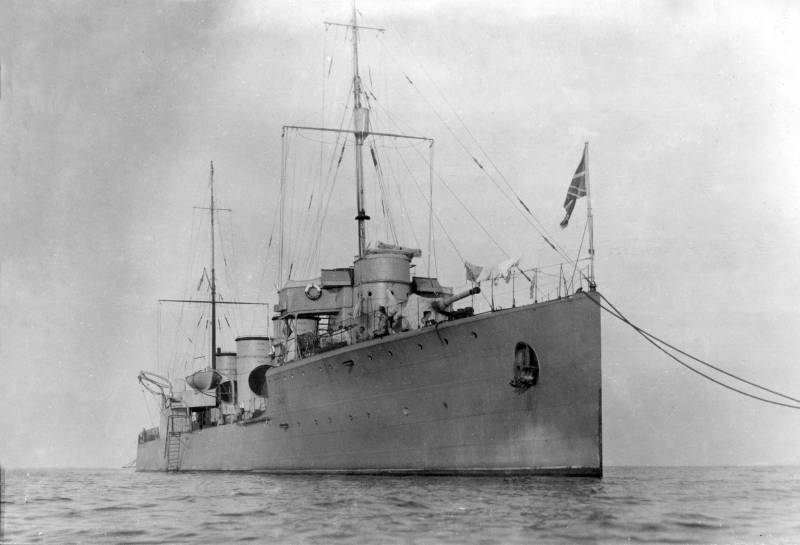 Novik was designed and built with funds from the Special Committee on Strengthening the Fleet with Voluntary Donations. It became the first Russian-built destroyer equipped with a steam-turbine power plant with high-pressure oil-fired boilers.

On the 21 August 1913 sea trials, the ship reached a record speed in the 37,3 node. Another distinctive feature of the "Novik" was the powerful artillery and torpedo armament of the four 102-mm rapid-fire cannons of the Obukhov factory and the same number of twin-tube torpedo tubes.

The characteristics of the Novik were so successful that for slightly modified projects in Russia they laid the 53 ship of this type. By the beginning of the First World War, they were considered the best in their class.

4 August 1915, the "Novik" entered into battle with the two newest German destroyers V-99 and V-100. The well-aimed fire of the destroyer commanders inflicted serious damage on the German ships, and the V-99 hit the mines, rushed to the shore and was blown up by a crew two hours later. Novik itself was not injured in this battle and had no casualties.

Many destroyers of this type continued their service in the Soviet fleet, taking an active part in the Great Patriotic War. 26 August 1941 "Novik", while in the protection of the cruiser "Kirov", hit a mine and sank.