Electronic warfare troops: how it works 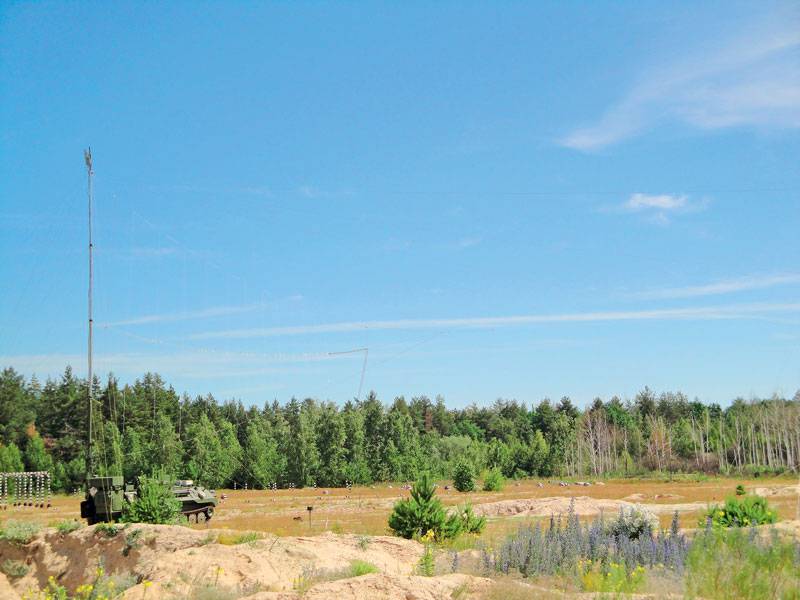 April 15, 1904, two days after the tragic death of Admiral Makarov, the Japanese fleet began shelling Port Arthur. However, this attack, later dubbed the “third cross-shoot”, was unsuccessful. The reason for the failure is disclosed in the official report of the interim commander fleet Pacific Rear Admiral Ukhtomsky. He wrote: “At 9 o’clock. 11 minutes in the morning, the enemy armored cruisers Nisin and Kasuga, maneuvering south-west-west from Liaoteshan lighthouse, started firing at forts and the inner raid. From the very beginning of the shooting, two enemy cruisers, having chosen positions against the passage of the Lyaoteshansky cape, outside the fortress shots, began to telegraph, why immediately the battleship “Victory” and the stations of the Golden Mountain began to interrupt enemy telegrams with a big spark, believing that these cruisers inform the shooting battleships about the hit their shells. The enemy fired 208 large-caliber shells. There were no hits in the courts. ” It was the first officially recorded in stories the fact that the use of EW in combat.

Modern EW, of course, is far from the "big spark", but the main principle underlying it remains the same. Any organized area of ​​human activity provides for a hierarchy, be it a factory, a shop, and even more, an army - in any enterprise there is a “brain”, that is, a control system. At the same time, competition is reduced to a competition of control systems - informational confrontation. After all, today the main commodity on the market is not oil, not gold, but information. If you deprive the competitor of the "brain", it can bring victory. Therefore, it is precisely the military that is trying to protect the control system in the first place: they bury it in the ground, build defensive headquarters defense systems, etc.
But, as you know, the strength of the chain is determined by its weakest link. Management teams need to somehow transfer from the "brain" performers. “The most vulnerable link on the battlefield is the communication system,” explains Andrei Mikhailovich Smirnov, a teacher at the Interspecies Training Center for Combat and Combat Use of EW Troops in Tambov. - If you disable it, the command from the control system will not pass to the performers. This is exactly what EW does. ” 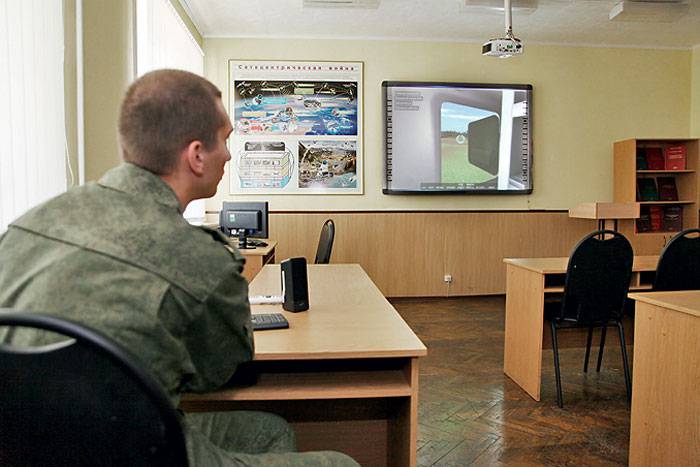 Not only communication
Training class of the Interspecific center of the EW troops
The machine EW "Mercury-BM" (center) is designed to deal not with lines of communication, but with guided weapons and ammunition with radio fuses. In the automatic mode, the system detects the ammunition and determines the operating frequency of its radio-fuse, after which it puts a high-power jam on the EFA Infauna complex (right) protects the equipment on the march by suppressing communication lines and radio controls with explosive devices
Suppression of electronic objects is the creation of a noise signal at the input of the receiver, more than a useful signal. “Older people probably still remember the jamming of foreign short-wave radio stations in the USSR, such as Voice of America, by transmitting a powerful noise signal. This is just a typical example of radio suppression, says Andrei Mikhailovich. - The EW also includes the installation of passive interference, for example, ejection of clouds of foil from airplanes to create interference to radar signals or the creation of false targets using corner reflectors. The EW’s interests include not only radio, but also the optical range — say, laser illumination of optical-electronic sensors of guidance systems, and even other physical fields, such as sonar suppression of submarine sonars. ”

However, it is important not only to suppress the enemy’s communications systems, but also to prevent the suppression of one’s own systems. Therefore, the competence of electronic warfare and electronic protection of its systems. This is a set of technical measures, which include installation of arresters and locking systems of receiving paths for the duration of interference, protection against electromagnetic impulses (including nuclear explosion), shielding, use of packet transmission, as well as organizational measures, such as working at minimum power and the shortest possible time on the air. In addition, EW also opposes the technical intelligence of the enemy, using radio masking and various cunning types of signal coding, which make it difficult to detect (see the sidebar “Invisible Signals”).

“The short-wave“ enemy voices ”were an analog signal with amplitude modulation at known frequencies, so drowning them out wasn’t so difficult,” Andrei Mikhailovich explains. “But even under such seemingly greenhouse conditions, with a good receiver, listening to forbidden transmissions was quite possible due to the peculiarities of the propagation of short-wave signals and the limited power of the transmitters. For analog signals, the noise level should exceed the signal level by six to ten times, since the human ear and brain are extremely selective and even a noisy signal can be disassembled. With modern coding methods, such as frequency hopping, the task is more complicated: if you use white noise, the frequency hopping receiver will simply not “notice” it. Therefore, the noise signal should be as similar as possible to “useful” (but five to six times more powerful). But they are different in different communication systems, and one of the tasks of radio intelligence is precisely the analysis of the type of enemy signals. In terrestrial systems, DSSS or frequency hopping signals are usually used, so that a frequency-modulated (FM) signal with a chaotic pulse sequence is most often used as universal interference. IN aviation amplitude-modulated (AM) signals are used, since the Doppler effect will affect the FM from a fast moving transmitter. To suppress aircraft radars, impulse noise similar to the signals of guidance systems is also used. In addition, you need to use a directional signal: this gives a significant gain in power (several times). In some cases, suppression is quite problematic - say, in the case of space or radio-relay communications, where very narrow radiation patterns are used. ”

One should not think that EW is jamming “everything” - it would be very inefficient from an energy point of view. “The power of the noise signal is limited, and if you distribute it across the whole spectrum, then the work of a modern communication system operating with frequency hopping signals will have no effect at all,” said Anatoly Balyukov, head of the testing and methodological department of the Interspecific Training and Combat Use Center. “Our task is to detect, analyze the signal and literally“ pinpoint ”its suppression - precisely on the channels between which it“ jumps ”, and no longer. Therefore, the widespread view that during the operation of the EW system, no connection will work - no more than a delusion. Only those systems that need to be suppressed will not work. ”

The war of the future

In 1990, the military around the world started talking about a new concept of warfare - a network-centric war. Its practical implementation was made possible by the rapid development of information technology. “The network-centric war is based on the creation of a special communication network uniting all units on the battlefield. More precisely, in the battle space, since the elements of such a network are global satellite constellations, ”explains Anatoly Mikhailovich Balyukov. - The United States made a serious bet on the network-centric war and actively tested its elements in local wars from the middle of 1990-x - from reconnaissance and attack UAVs to field terminals from each fighter receiving data from a single network.

Such an approach, of course, makes it possible to achieve a much higher combat effectiveness due to a serious reduction in the time of the Boyd loop. Now we are talking not about days, not about hours or even minutes, but literally about real time - and even about the frequency of individual stages of a loop of tens of hertz. It sounds impressive, but ... all these characteristics are provided by communication systems. It is enough to worsen the characteristics of the communication systems, at least partially suppressing them, and the frequency of the Boyd loop will decrease, which (other things being equal) will lead to defeat. Thus, the whole concept of network-centric war is tied to communication systems. Without communication, the coordination between the network elements is partially or completely disrupted: there is no navigation, there is no identification of “friend or foe”, no marks about the location of troops, units become “blind”, automated fire control systems do not receive signals from guidance systems, and use many types of modern weapons in manual mode is not possible. Therefore, in a network-centric war, EW will play one of the leading roles, taking over the air from the enemy. ”

EW methods are actively used not only in the electromagnetic range (radio and optical), but also in acoustics. This is not only anti-submarine warfare (interference and false targets), but the detection of artillery batteries and helicopters in an infrasonic wake widespread in the atmosphere.

Amplitude (AM) and frequency (FM) modulation is the basis of analog communication, but they are not too robust and therefore are quite easily suppressed using modern EW tools.

John Boyd began his career as a US Air Force pilot in 1944, and at the beginning of the Korean War he became an instructor and earned the nickname “Forty-Second Boyd”, because none of the cadets could hold out against him in training for longer than that time. 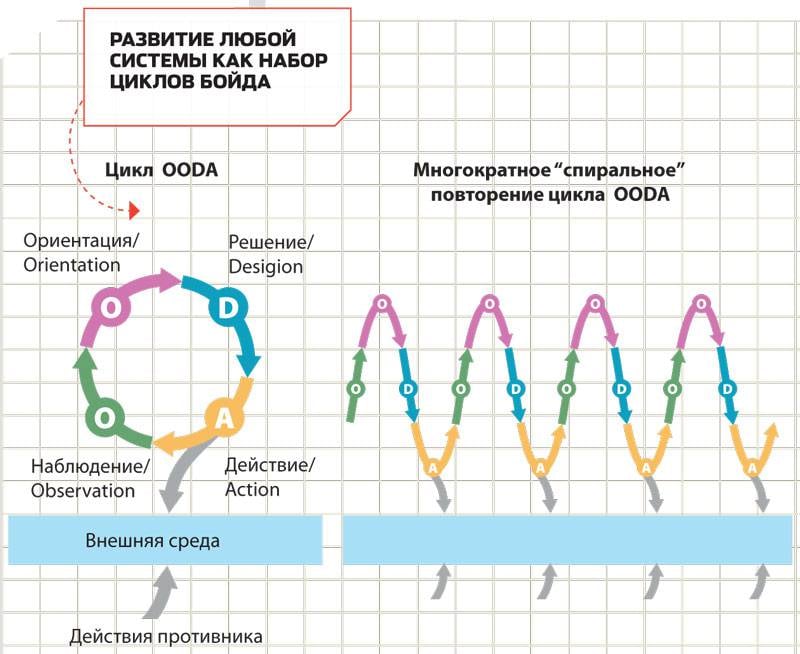