20 2016 June
6
New plans of the French Ministry of Defense concerning the modernization of the armed forces have become known. 14 June the following steps were announced in the direction of updating the fleet of vehicles, involving the creation and production of a number of new samples. Over the next years, it is required to complete the development of a number of new projects, and then build and transfer to the troops several thousand armored vehicles of new types. All these works will be carried out under the existing program Scorpion.


The Scorpion program has been implemented since the end of the last decade by the joint efforts of several states. The purpose of the program is to create new types of weapons and military equipment, as well as the development of communication and control systems for future use. Some directions of this program have already given certain results. Thus, the current development of combat equipment FÉLIN and some other modern means used by the troops is carried out precisely within the framework of the Scorpion program.

In 2009, the authors of the Scorpion program formed the first plan for the development and supply of new armored vehicles for the troops. According to the plans of the time, the first mass-produced vehicles of the new types were to go to the troops in 2015. However, the authors of the military budgets had to work for the next few years under severe constraints, which forced them to cut new programs. As a result, work on the technique of the Scorpion project was seriously delayed, and the planned schedule was completely disrupted.

The logo of the program Scorpion. Figure Warfaretech.blogspot.ru

Construction of the new technology was planned to begin in the framework of the next five-year plan, in the second half of the current decade. Until a certain time, there were concerns regarding the possible failure of new plans. Another reduction in funding and a new transfer of work to a later time could seriously hit the defense industry, as well as lead to the closure of some enterprises. Not wanting negative consequences for the industry, in 2014, the French Defense Ministry took up the drafting of new plans. The results of the part of this work, concerning the financial side of the program, were announced a few days ago.

Over the next 11 years, the French military intends to spend on the new stages of the Scorpion program about 6 billion euros (6,7 billion US dollars). This money will be spent on the development and subsequent construction of a number of new armored vehicles, as well as on the modernization of some types of existing equipment. In addition, it is planned to create and implement new support systems that will be used for various purposes, including in the training of personnel.

Current plans include the creation and production of several new combat vehicles for various purposes. The Army requires a number of new wheeled armored vehicles equipped with various weapons and various special equipment. General requirements for all projects imply the use of 4 level protection according to the STANAG 4569 standard (protection against 14,5-mm bullets and 10-kg of explosive devices), the ability to use equipment as a basis for modifications of various purposes, etc.

VBMR Griffon armored vehicles (Véhicules Blindés Multi Rôles - “Multi-Purpose Armored Vehicle”) should be the most popular technique. In total, it is planned to build 1722 machines of this type. Before the 2025, the customer intends to receive the first 780 armored vehicles, after which the production will continue until full completion of the order. The VBMR Griffon should be a replacement for existing VAB armored vehicles that are currently used in various modifications of the 36. The newest "Griffins" will also have to get several specialties, from transporting personnel and evacuating the wounded to conducting reconnaissance and adjusting fire.

According to customer requirements, the VBMR Griffon will be a three-axle armored vehicle with a combat mass within 20-24 tons. The standard crew will consist of two people. In the infantry vehicle variant, the vehicle will carry up to eight passengers. The equipment is proposed to be equipped with remote-controlled combat modules of various types with automatic grenade launchers or machine guns, both rifle and large-caliber. In total, it is planned to develop and put in the series ten specialized variants of the “Griffin”. These will be four variants of vehicles for the transportation of personnel, three repair and evacuation versions, an artillery reconnaissance, an ambulance and a command and command vehicle.

A reduced and lightweight (combat weight up to 10 t) version of the VBMR with a two-axle undercarriage is also being developed. This technique, differing from the base “Griffin” by a number of characteristics, will replace the existing VBL armored vehicles in the troops. In 2021-25, it is planned to build 200 units of such equipment. Then another 158 machine transfer should occur.

For the replacement of armored vehicles with heavy armament types AMX-10RC and ERC-90 Sagaie, a new draft EBRC (Engins Blindés de Reconnaissance et de Combat - “Armored reconnaissance-combat vehicle”) or Jaguar is proposed. The old types of equipment available in the troops no longer fully meet modern requirements, which makes it necessary to create a replacement for it. The EBRC Jaguar will be a three-axle wheeled vehicle with a 25 T combat weight and a crew of three. The main weapon of the Jaguar in the first version will be the 40-mm automatic gun, created by Nexter and BAE Systems. It is also proposed to use a machine gun and one of the newest missile systems. With the help of such weapons, an armored vehicle will be able to effectively attack and destroy targets at ranges up to 3-3,5 km. 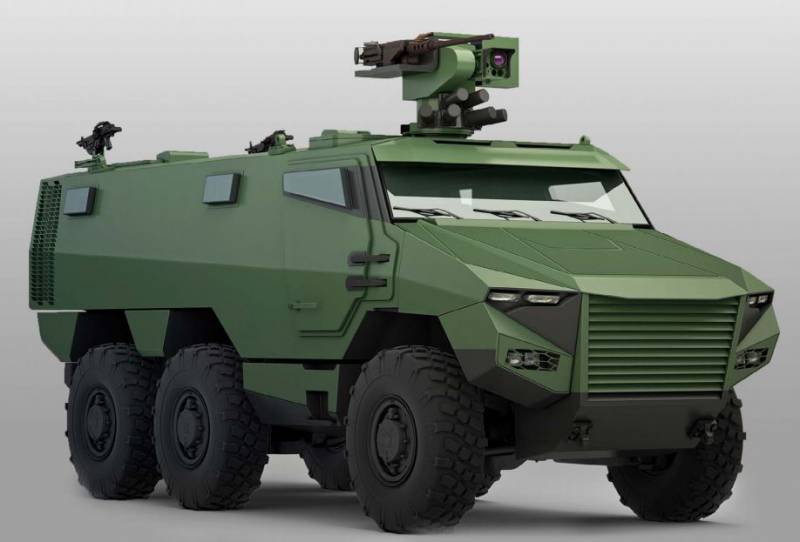 By 2025, the industry will have to supply 110 machines such as EBRC Jaguar to the customer. Due to subsequent deliveries, the total number of such equipment is planned to be increased to 248 units.

In addition to the development and construction of new armored vehicles, the new plans of the Scorpion program include the repair and modernization of existing equipment. So, until the middle of the next decade, 200 major combat tanks AMX-56 Leclerc. The further fate of the remaining two hundred of these machines, which are in service with France, has not yet been specified. The main objective of the modernization of tanks will be the installation of new control and communication systems that will allow equipment to receive the necessary information in a timely manner and make full use of all the new capabilities that the army gives new systems and complexes.

The final element of the new program, which will be created and implemented until the middle of the next decade, is the SICS (Système d'Information du Combat) Scorpion troop information management system. The introduction of individual elements of this system, the development and testing of which has already been completed, will begin as soon as possible. The implementation of this part of the current program will significantly improve the capabilities of the troops in terms of data transfer and unit management. In addition, the structure of communication and control systems will be optimized, since SICS Scorpion will replace six sets of existing types at once.

Plans for funding and quantity projections for future purchases were announced only a few days ago. Nevertheless, the development of a number of new projects has been going on for several years, and in some cases has achieved notable success. For example, the new communication and control system is ready for partial implementation. Also is expected to start testing some new types of armored vehicles.

The first contracts for the development of new systems, weapons and equipment in the framework of the Scorpion program were signed in 2011 year. Later, several events occurred that showed some features of the plans of the French leadership. So, in January 2014, it was announced that only French companies can apply for tenders for the development and supply of new systems and equipment. Referring to their own interests and using the nuances of European Union law, the French military department refused to accept applications from foreign countries.

At the end of 2014, plans were made for financing new developments, and schedules were approved. Some samples of new types should be presented already in 2018 year. A total of 752 million euros were allocated for preliminary work on several projects. 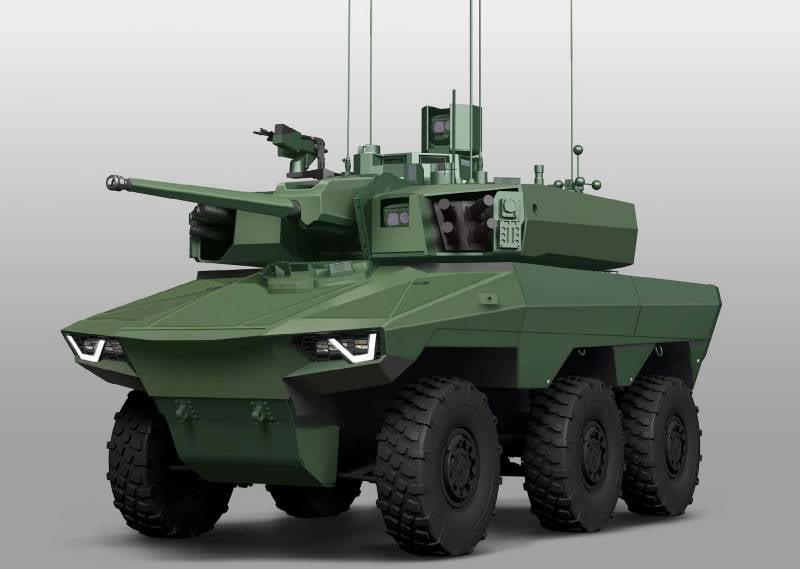 Full implementation of all existing plans for the Scorpion program will allow the French Armed Forces to significantly upgrade the fleet of armored vehicles. Currently, the French ground forces are armed with a large number of equipment, created in the seventies and eighties of the last century. Despite all attempts at modernization, such machines are already outdated, both morally and physically, because of which they need to be replaced. It is for the replacement of obsolete machines that a new program was developed.

In connection with the delivery of new armored vehicles under the reduction will fall a number of existing technology, relating to a large number of modifications of several basic models. It is noteworthy that in the course of modernization, the principle of creating several variants of equipment for different purposes based on unified platforms will also be used, although in this case we are talking about the initial creation of multi-purpose chassis for different equipment.

In accordance with the experience of the conflicts of the last decades, the customer, represented by the French Ministry of Defense, has formed requirements for the new technology. According to reports, special attention is paid to ballistic protection against attacks from all angles, as well as anti-mine equipment equipment. Thus, Griffins, Jaguars and other equipment, unlike their predecessors, will initially be adapted for action in low-intensity conflicts.

The approved schedule for the Scorpion program involves the continuation of design work over the next few years. By the end of this decade, prototypes of the new technology, which will have to participate in the trials, will have to enter the landfills. By the 2020 year or later, the stage of signing contracts for the mass production of new equipment will begin. The first batches of the newest armored vehicles will be delivered to the 2025 year, after which production is planned to continue until full compliance with the existing requirements.

After a period of cuts and a shift in the timing of the program, the French military managed to find the required funding and start the necessary work. Due to this, over the next decade, the country's military industry must fulfill several important orders, with the help of which the fleet of army armored vehicles will be updated. Whether they will succeed in fulfilling the approved plans and whether they will encounter new problems, financial, political or other, will be known in the future.

Ctrl Enter
Noticed oshЫbku Highlight text and press. Ctrl + Enter
We are
Control systems of the battle of the American army. Current position and future-oriented modernization strategySoldier systems under the blows of the winds of war (Part of 1)
Military Reviewin Yandex News
Military Reviewin Google News
6 comments
Information
Dear reader, to leave comments on the publication, you must sign in.