17 2016 June
25
Blog chervonec_001 published another summary of the military officer "Mag" about the situation in the Donetsk Republic. 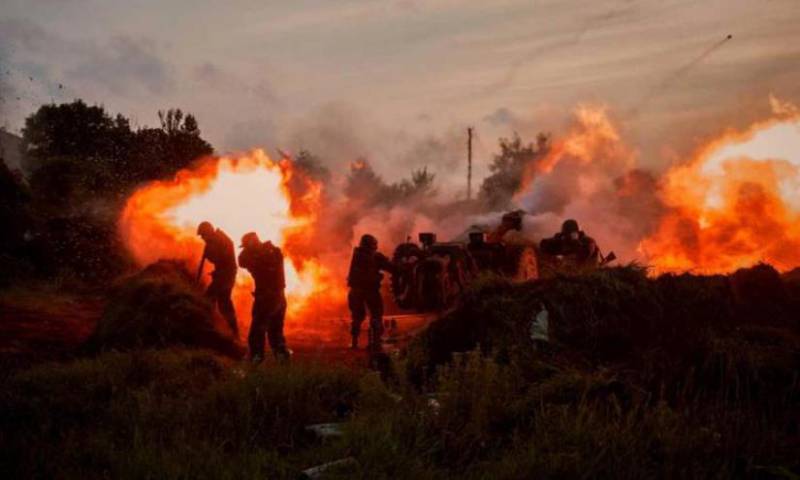 “In the last report I wrote that on the night from 8 to 9, Gorlovka, Makeyevka and the northern districts of Donetsk were heavily shelled. As it turned out later, an attempt to demonstrate the capabilities of the American radar artillery guidance systems, which entered service in the Armed Forces of Ukraine, was the cause of these attacks on peaceful quarters of our cities. Two of them, AN-TPQ-48 and AN-TPQ-36, were deployed on the night of June 9.

The work of the complexes was observed by the delegation of the military from the USA, who came to Avdiivka. The delegation was led by military attache Colonel M. Van Delvich and his assistant E. Self. There were also representatives of the General Staff of the Armed Forces of Ukraine, coordinating the shelling. As a result of these attacks, two people were killed and another 24 injured, incl. child up 3 years. One of the dead at night - 22 summer Shakhtar, a young squadron, who received a shrapnel wound to the neck.

The next day, on the night of 9 on 10 June, we also had heavy shelling, and worked very hard in residential areas, reaching the center of Gorlovka. Hits were recorded in Yasinovataya and Makeevka. Under the cover of shelling, the Ukrainian Armed Forces launched several assault attacks, one in the Gorlovka area, the second in the Avdiivka area.

The APU 53 Brigade attempted to occupy a gray zone north of Gorlovka, they were covered by several 82-mm and 120-mm mortar batteries, which worked on the militia positions and the suburbs of Gorlovka. The art battery 122-mm howitzers APU worked directly on the residential areas of the Gorlovka. The militia units managed to repel the attack of the enemy under Gorlovka, as a result of which the APU suffered losses in numbers: six servicemen were killed and 12 was wounded.

In total, only on these two sectors of the front, as a result of unsuccessful attacks on the positions of the DPR in the areas of Gorlovka and Avdiivka, nine servicemen of the Armed Forces of Ukraine were killed, 19 was injured.

Passed information that the militia in the area Krasnogorovka repulsed 2 km of our territory.

Also in these hot days, a video appeared about the destruction of the BMP-2 APU by the battalion "Patriot". On the highway to Donetsk - Krasnoarmeysk, in the area of ​​the village of Peski, which is almost adjacent to the airport, the BMP-2 APU was noticed, which led non-targeted fire on the move. First, the militiamen with the help of a “boot” (LNG-9) were smashed (trucks were shot down), and then the ATGM was burned. To capture and evacuate the trophy, it was not possible, too far from our positions.

As usual, all day until late in the evening was quiet. And then, everything is new.

Also, there was information about the transfer of fighters to Mariupol 300, most likely a rotation, of one of the battalions.

11 June, Saturday.
00: Fighting continues in the area of ​​Staromikhailvoki and YPG. In the sky over Donetsk, UAV UAVs are very active. Gorlovka, in the area of ​​the deep mine from a mortar shelling killed the pipeline.

00: 40 in the area of ​​the YPG has connected the art of the Ukrainian Armed Forces. 00: 50 in Donetsk, Makeyevka, Yasinovataya and Gorlovka began to fly 152-mm projectiles. Works as "Hyacinths" 40-I art brigade of the Armed Forces of Ukraine from the direction of Umanskoe. Under heavy shelling, Kuibyshev and Kiev districts. The whole city hears heavy bachi, this is not remembered from last summer or even from spring 2015.

Morning and day was a rest for us, after night shelling.
In 18: 50 Trudovskys, under shelling of snipers, machine guns and mortars APU. In Gorlovka air defense worked.

In 19: 07 detonated an explosive device in the Cathedral area, near the former children's town. On suspicion arrested two.

21: 25 in the area of ​​Broad Beams, mine 6 / 7, Zaitsevo started shooting battles. 53-I brigade again tries to break through our defenses, all small arms are used, with the support of mortars and infantry fighting vehicles.

21: 45 north of Donetsk in the Spartak region, a battle ensued, residents of Oktyabrsky and Kiev hear mortars, machine guns and BMP work. As usual, an hour later, art connected. Arrivals are rare, about 2 projectile per minute. They work in residential quarters, in squares, not sighting.

In 22: 20, all of Donetsk can hear very loud rumbles, there are wounded among the civilian population. Ambulances and firefighters, despite shelling, do their work and save people. Very strong shelling in Gorlovka.

22: 20 heavy shelling on the entire Donetsk front, ranging from Trudovskiy and ending with Yakovlevka, Makeyevka and Yasinovataya. In Gorlovka, too, hell is going on. In the village of Zaitsevo several hours of shooting battles and mortar shelling.

22: 35 in the center of Donetsk electricity outages. It is possible to hit the substation. People charge their phones and stock up on water in case of a utility outage.
In 22: 55 under Avdiivka, our response mortar fire covered the equipment, the residents of Yasinovataya see explosions and fire in the positions of the Armed Forces of Ukraine.

Also on this turbulent evening, an anti-tank mine blew up a vehicle with militants from the Aydar battalion. As a result of the incident, two militants were killed, four were injured, one of them very bad. One of the dead was listed as the commander of the mortar battery of a military unit 2950. Photo below. 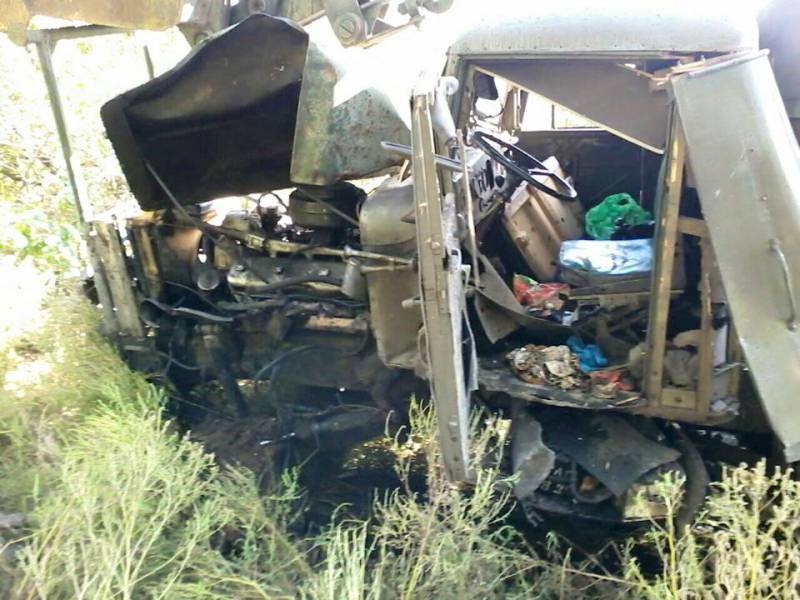 23: 05 new shelling of the Armed Forces of Ukraine, residents of the Kievsky district of Donetsk and Makeyevka hear the shells flying through the militia in the YPG area. District YPG under fire.

Officially, we killed two members of the VSN and injured 5 civilians. The 40-I art brigade of the Armed Forces of Ukraine armed with the 2A36 “Hyacinth” artillery systems, caliber 152 mm, commanded by the criminal Ryabokon, again fired at the civilian population.

12 June, sunday surprisingly until the evening was quiet.

With 17: 45, residents of the Kuibyshev and Kiev districts heard the first arrivals.

19: 40 northern suburbs of Gorlovka are still under mortar fire.

20: 45 in the Petrovsky district (Trudovskie) a battle began, mortars, LNG. Ukry rolled out the tank and use it as an ACS.

Before 23: 05, the northern outskirts of Gorlovka rattled from shelling.

13 Junemonday
Again until the evening, silence with 19: 50 in the west of Donetsk began shooting, the minutes after the 20 mortars were connected. 21: 00 In the Petrovsky district (Trudovskie), the fighting continues with the use of mortars 82 and 120 mm. 23: The 30 began the battle in the industrial area of ​​the APU again using 152-mm.

14 June, Tuesday.
In 01: Our 05 began to give an answer, a lot and for a long time flies away at once from several batteries. In 01: 45, a fire is visible in the positions of the Ukrainian Armed Forces in the village of Water, a massive detonation of ammunition has begun. Our gunners managed to get into the ammunition depot. Nevertheless, our continued otvetku on other targets, including mortar batteries.

In 14: 30 started a fight north of Gorlovka. In 15: 00, the battle began in the green between Svetlodarsk and Uglegorsk, east of Gorlovka. APU continues to check the defense of the BCH, making attacks in small groups. After detection under the cover of mortar fire and armored vehicles flee back abruptly. Novoazovskiy district (south of the DPR) also reported that in 19: 00 evenings they had dill made an evening to pass in a small group, for which they were punished. DRG APU retreated under cover of 120-mm min and 122-mm shells. With 20: 30 front came to life, again mortar shelling mainly Gorlovka and west Donetsk

So passed these restless five days. To summarize - the shelling now does not begin on Friday, but on Thursday and does not continue until Monday, but until Tuesday inclusive. On Wednesday, the front is quiet.

Ctrl Enter
Noticed oshЫbku Highlight text and press. Ctrl + Enter
We are
Weekly summary (30 January-5 February) on the military and social situation in the DPR from the military officer "Mag"Reports from the militia of New Russia for 13-14 September 2014 of the year
Military Reviewin Yandex News
Military Reviewin Google News
25 comments
Information
Dear reader, to leave comments on the publication, you must sign in.