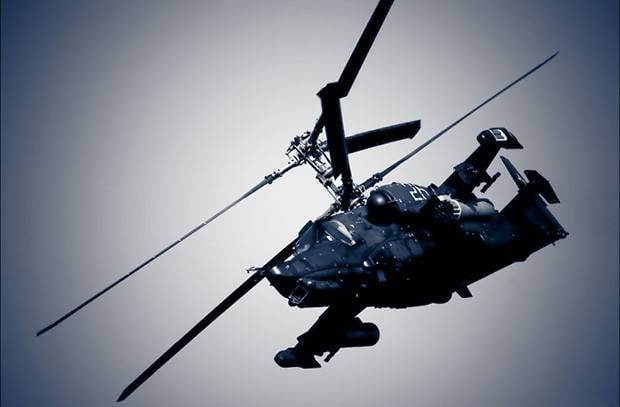 Russian helicopters, although they appeared a little later than their classmates abroad, from the very first years won a worthy place in stories world aviation. The records and achievements of the representatives of the two main domestic helicopter manufacturing companies - "Mi" and "Ka" - can be described for a long time. But in this row there is one helicopter that managed to overtake not only its time, but also to change the very idea of ​​what a military rotorcraft could be. We are talking about the world's first combat single-seat helicopter, which not only took off, but also entered service. True, this did not happen at all quickly: after all, for the first time the Ka-50 “Black Shark” took off from the ground on June 17, 1982, and it was adopted only on August 28, 1995.

Its appearance, as has happened more than once in the history of world armament, the Ka-50 owes primarily to its main rival - the American helicopter AN-64A Apache, which became the first combat anti-tank helicopter in the world. The Apache launched its first flight in September 1975, and a year later, on December 16, 1976, the Soviet government set the task to develop a promising attack helicopter, designed primarily to combat tanks enemy on the battlefield.

However, there was another reason for the appearance of this document, which played a special role in the history of the domestic helicopter industry. By that time, the first domestic combat helicopter Mi-24 had been used in the Soviet army for five years. But he, burdened by the amphibious compartment traditional for the Mile Design Bureau machines, found it difficult to truly effectively act on the battlefield. In addition, the classic longitudinal scheme with the main propeller over the fuselage and the steering on the tail boom did not allow the car to be sufficiently agile and speedy, especially in situations where it was necessary to quickly go from hover mode to flight mode. And most importantly, the Mi-24 was distinguished by its substantial dimensions, which with the increase in the effectiveness of the air defense systems of the battlefield became an increasingly important factor.

With all this in mind, the December decision of 1976 was issued, and for the same reasons, it was decided to develop a new car on a competitive basis. In the competition for the right to create a new, more effective attack helicopter for the Soviet army, two long-standing rivals joined in: the design bureaus of Kamov and Mil. At the same time, the Mi company had the advantage of a long-standing partner in the army: their helicopters were in service with the ground forces and the Air Force from the beginning of the 1950s, when the first Mi-4s began to enter service. The Ka company declared itself as a manufacturer of helicopters for the military much later, but louder: the Ka-1960 helicopter that it created in the early 25s became the first Soviet combat helicopter - namely a combat helicopter, and not a military transport one with combat capabilities. However, all serial military vehicles manufactured by Kamov were supplied only the fleet, and therefore work on a land helicopter was, for the Kamovtsy, in general, rather new.

But perhaps it was this novelty that allowed them to look at the task completely unbiased, outside the usual patterns and ways of solving problems. This is on the one hand. On the other hand, the Kamovians used the coaxial helicopter scheme that they were used to, which was still considered common for naval, but not for land vehicles. But not because they did not want to look for other options. Among the sketch proposals, there were also traditional, longitudinal helicopters, but in the end, the advantage was left behind the firm Kamov coaxial scheme. After all, it was she who gave the helicopter advantages, which turned out to be decisive for the machine, whose main task was to survive on the battlefield, fighting with a well-armored and armed enemy. The new helicopter, the first land combat helicopter in the world with a coaxial scheme, was distinguished by much greater thrust-to-weight ratio and, therefore, greater rate of climb and a large static ceiling, greater speed of movement, the ability to move sideways and even back at high speed, to perform many inaccessible pilotage figures . And most importantly - it became more compact and tenacious, because it did not have a tail boom with transmission mechanisms, the loss of which is always catastrophic for machines of the longitudinal scheme.

But Ka-50 developers didn’t stop at this innovation alone. In search of additional competitive advantages over the Mi company developers, they decided on another unprecedented step - and reduced the crew of the helicopter to one person! In fact, Kamovtsy developed a complete analogue of the fighter-bomber, only in the version of the helicopter. Even the hull lines of the new car were rather aircraft-driven, rapacious, and not traditionally heavy helicopter. And so that the only member of the crew of the new machine could cope with all the duties that the pilot and the weapons operator traditionally shared among themselves on other helicopters, Ka-50, which then still had a working index B-80, it was decided to equip - and also for the first time in Russian history Helicopter - highly automated aiming and navigation complex. 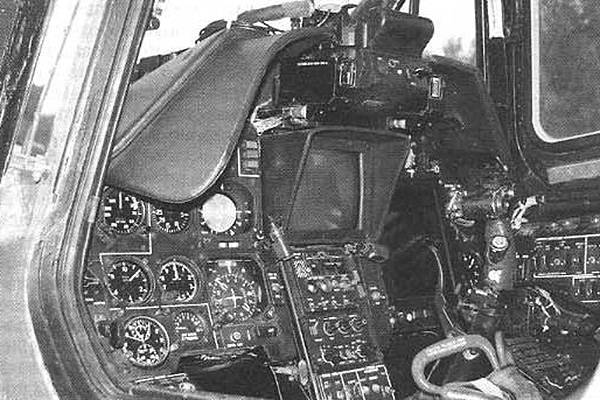 Cab Ka-50, 1982 year. Photo: topwar.ru
By that time, the domestic industry could well create such systems, although they, as a rule, were distinguished by somewhat larger dimensions and masses than their foreign counterparts. But it was precisely due to the fact that one person had to fly the B-80, and the space saved by refusing to accommodate the second crew member could be given under the electronics - and still win! Finally, another advantage, which gave the option of a single helicopter, was to reduce the cost of training and maintenance of flight personnel and reduce losses in combat situations. After all, the training of one pilot, even a “multi-operator”, ultimately costs the state less money and effort than two narrow specialists - the pilot and operator, the number of front-line units, and therefore their maintenance costs are also reduced by half, and make up for losing one person is easier than two or three.


Of course, the idea of ​​a single-seat helicopter provoked significant resistance from many military personnel — it was too innovative and too different from all of the world’s experience in combat helicopter construction and use. But the chief designer of B-80, Sergey Mikheev, did not accidentally answer all these objections with these words: “It’s not worth proving that one pilot works better than two, you don’t need to prove the unprovable. But if a pilot in our helicopter copes with what two will have to do in a competing helicopter, it will be a victory. ” And the designer Mikheyev and his team won this victory in October 1983, when at a meeting convened by the decision of the Commander-in-Chief of the Air Force Chief Air Marshal Pavel Kutahov and Minister of Aviation Industry Ivan Silaev summed up the first results of tests of prototypes B-80 and Mi-28. Most representatives of the aviation industry and military aviation spoke in favor of the Kamov machine, assessing its main advantages: a simpler piloting technique, a large static ceiling and vertical rate of climb, as well as a better ratio of efficiency and cost. The advantages of the B-80 were confirmed by the state comparative tests of new helicopters, which began in the 1984 year and lasted more than two years. Everything turned out to be proven: the efficiency of the coaxial scheme, the ability of one pilot to adequately cope with the duties of the pilot and the weapon operator, and the maneuverability of the vehicle, and the advantages of a high-tech aiming and navigation system. As a result, the four defense institutes that evaluated the test results, in October 1986 of the year, issued a unanimous final conclusion: consider it appropriate to select the B-80 as a promising combat helicopter of the Soviet army.

Alas, the further history of the helicopter, which resulted in the Ka-50 index, which is traditional for Kamov machines, turned out to be much less rosy. The process of preparing documentation and creating the first production copies suitable for conducting state tests, was delayed - and inevitably got into the tragic events of the beginning of 1990's. Despite this, in January 1992 began state tests, and in November 1993-th - military, held at the Center for Combat Use of Army Aviation in Torzhok. At the same time, the helicopter entered the international arena, and then for the first time in domestic practice! - even before its official adoption, he became the hero of the motion picture, which gave him his own name. The film “Black Shark”, in which the main role was played by Ka-50, was released on screens in 1993 year, and the order for the film, as claimed by its director Vitaly Lukin, made the Kamov Design Bureau itself — apparently with the aim of ensuring the promotion of its car not only in Russia, but also abroad. This, alas, was common sense: the development of events suggested that the company “Ka” might not be able to get a serious order in its own country ...

In the end, so, unfortunately, it happened. Although in the 1995 year, the Ka-50 was adopted by the Russian army by the presidential decree, there was only enough money for a dozen production vehicles. Soon, very difficult to explain events began: even after effective combat practice in Chechnya, when the Ka-50 fully proved its effectiveness and ammunition, it was decided that the army’s main rival, the Night Hunter Mi-28, would become the main attack helicopter of the army. And today it is still he who is preferred, although the appearance of the Ka-50 two-seater modification, the Ka-52 Alligator attack helicopter, still allowed the Russian army not to lose the unique car. However, such oddities in the history of this or that unique type of weapon are not uncommon, and history has repeatedly proved that it’s really worthwhile. weapon still be in the hands of those who deserve it. Even if it takes more than three decades.