Why, with the enormous contribution of the North Sea inhabitants to the Victory and having such awards as four Orders of Lenin and four Red Banners, two Ushakovs of the first degree, many others, Arseny Golovko is the only commander fleets never became a Hero of the Soviet Union, remains a mystery.

Among the figures who restored the sea power of Russia in Soviet times, who led the fleets during the Great Patriotic War, Admiral Arseny Golovko, whose 110 anniversary of his birth falls on June 23, occupies a more prominent place. The Northern Fleet under his command played an important role in the defense of the Soviet Arctic, in the defeat of the Nazi troops in the High North and the liberation of Northern Norway. 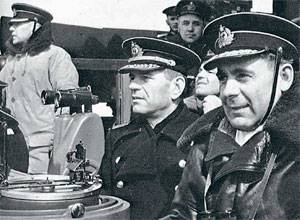 To serve on warships Arseny Golovko is sent to 1925, according to the Komsomol call-up. After graduating from the Frunze School in 1928, the forge of the command personnel of the Navy, the future admiral went through all the stages of the formation of a naval officer. He was even a participant in the war in Spain as an adviser to the commander of the Cartagena Naval Base in 1937 – 1938.

In 1940, he is already an experienced naval commander, the country's top leadership is aware of this, so the Central Committee Politburo without hesitation asserts him as commander of the Northern Fleet. The sailors' enthusiasm in mastering the theater of operations and pride in the fleet were high, but they needed to be sent in the right direction, because the overall picture looked disappointing. The ship’s combat capability is low, the ship-repair base is weak, ship-borne mechanisms are worn out, and in submarines a large displacement of command personnel has had to think about a lot. In strengthening the fleet, the key role belonged to the USSR People's Commissariat of the Navy, and Golovko received this assistance. There were objective difficulties, for example, in 1940, due to the lack of bases, it was not possible to accept all the ships built for the Federation Council.

But there was an area where success was almost entirely decided by the people, their energy, diligence, organization and initiative. This is a combat training. Wise with the experience of battles in Spain, Golovko demanded that commanders build the training of personnel, taking into account the peculiarities of the modern war, not to allow simplifications and relaxation. “Swim more, fly more! This is what should be our motto in combat training, ”he stressed more than once at meetings and exercises.

At the first opportunity, the commander himself went to sea. Of particular concern to Golovko was the preparation of a large detachment of young officers who had recently come to the ships. The Admiral knew from his own experience: they become a real commander at sea, in difficult campaigns, in the struggle with the elements and dangers, when the sense of responsibility for the fate of people and the ship is exacerbated.

No matter how weak the Federation Council is in terms of the number of ships and airplanes, Golovko and the Military Council saw their duty in making it strong due to excellent combat and naval skills, high ideological and political training, discipline and organization of personnel. Time has shown that these daily efforts have produced results. When the war broke out, the North Seamen were on full alert.

The Northern Fleet, which Admiral Golovko commanded from 1940 to 1946 for the year, rose to the occasion at the crucial moment of the war. The forces of the Northern Fleet not only disrupted the enemy’s sea communications, restrained its onslaught on land, but also protected the Allied convoys.

Admittedly, Lend-Lease played a prominent role in the victory over fascism, and the bulk of supplies went through the northern ports. In only two years (1943 – 1944), the Federation Council met 368 and conducted 352 allied transport (excluding its own), which is hundreds of thousands of tons of military cargo. Only ten transports were lost - less than three percent, an excellent indicator.

The victories of the fleet in the war, the skillful leadership of its activities brought Arseny Golovko to the ranks of the best military leaders and naval commanders of the Great Patriotic War. In 1944, he became a full admiral, but he never received the Gold Star, although all North Sea residents are Heroes of the Soviet Union (82 only once and three times) owe their high rank to the commander. And how many parts and ships awarded honorary titles and titles - all and not to mention. The fleet commander invariably assumed responsibility for the actions of subordinates.

From 1947 to 1950, he was in the post of Chief of the General Staff of the Navy, and from 1950 to 1952, he was Chief of the Naval General Staff, but didn’t show much of himself in this position. Still, staff work requires different skills than teamwork. And the admiral is returned to the ships. Since 1952, he has commanded 4 in the navy, then the combined Baltic fleet. In this position, doing his usual business, he served until 1956, when he was appointed first deputy to Admiral Sergei Georgievich Gorshkov, who was the commander-in-chief of the Navy for nearly 30 years (and whatever they say, this is a great naval commander).

In the sixties, the Cold War was gaining momentum, the Soviet fleet went out into the ocean, becoming an instrument of big politics. The Arctic is becoming strategic. And the Northern Fleet begins to play the role of one of the first violins. Golovko analyzes the experience of fighting in this maritime theater, and works on articles on topical issues, where he emphasizes the special importance of creativity, innovation, and initiatives in the struggle with a likely adversary, urging to be on the alert: “Vigilance is the law of our time, created by experience stories. And this experience includes events connected with the beginning of the Great Patriotic War, which each of us is obliged not only to remember, but to remember. Always remember! ” We feel the truth of these conclusions today when we lose all positions in the oceans.

Arseny Golovko lived only 56 years, his heart stopped from the tensions that fell to his lot.