“From the heroes of the old days there are sometimes no names left ...” The words from the song to the cult Soviet film “Officers” can be completely attributed to many who faithfully served Russia, but are now forgotten. Among them is Fyodor Dubasov.

At the mere mention of him, the older generation remembers horror stories born during the first Russian revolution, which was strangled by the decisive actions of this extraordinary man.

From “Tsesarevich” to “Peter the Great”

He was born on June 21, 1845 in the family of a hereditary naval officer. The founder of the dynasty Avtonom Dubasov participated in one of the first battles of a young Russian fleet with the Swedes. Following family traditions, Fedya Dubasov brilliantly ends the Naval Cadet Corps and soon makes his first round-the-world voyage. Realizing that this is not enough for a naval officer’s successful career, he enters the Naval Academy, where he successfully completes his studies in 1870. Seven years later, the Balkan War began, in which Dubasov, already a lieutenant, not only took part, but became famous throughout Russia.

“Having taken Port Arthur, we are embarking on a path from which there is no turning. I do not want to be a prophet, but it will inevitably involve us in great difficulties ”
In May, 1877, he, commanding the Tsesarevich destroyer, together with three boat commanders, suddenly attacks the Ottoman flotilla on the Danube at the crossing point of our troops and sends an enemy battleship to the bottom. Under hurricane fire, the Turks impudently land with their comrades aboard a sinking ship in order to remove its flag. None of our boats was hurt, all returned safely to base, which was perceived as a miracle. And behind the young lieutenant, the glory of a desperate brave man was soon established. A march was written in his honor, the hero’s photographs were successfully sold on the streets. By the end of the war, Captain-Lieutenant Dubasov was awarded the Order of St. George and St. Vladimir, the gold weapons. He is at the peak of popularity and fortune favors him - he is appointed commander of the cruiser "Africa", produced in the captains of 1 rank.

In 1889 – 1891, he was already the commander of the frigate “Vladimir Monomakh” participating in a three-year round-the-world voyage, accompanying Tsarevich Nicholas on his journey to the Far East. The hike gives not only invaluable experience. The travel notes that came from the pen of Dubasov are found by their readers. He owns and works in the field of naval affairs, mine war, which are translated into English and French. Shortly after the Far Eastern mission, he received the command of the best battleship of the imperial fleet, Peter the Great, and then became head of the Pacific squadron, receiving the rank of vice admiral. And this is where his career growth ends ... 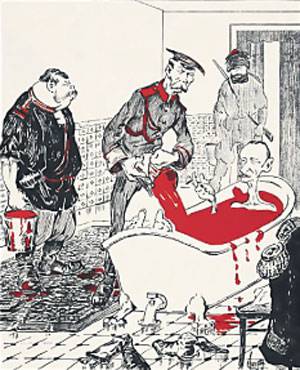 Fyodor Vasilyevich, as once in his youth on the Danube, still shows himself to be a principled officer, he flatly refuses to accept the rules of the game in giveaway, which were spread in the navy. He does not go after the word in his pocket, argues with the authorities, is not afraid of the authorities, shows independence, which he absolutely dislikes the command. The dispute between Dubasov and the legendary Admiral Makarov about the advantage of large ships over small ones is well known. As a result, Stepan Osipovich recognized the correctness of his opponent. However, the command tried to remove the recalcitrant vice-admiral from the fleet, demotion, write off ashore. Not easy to develop relationships with fellow workers. Tough discipline always prevailed on the ships entrusted to Dubasov, he did not tolerate slobs, sycophants and careerists. For this he was considered arrogant and arrogant.

In 1898, by order of the Admiralty, the Russian fleet under his command occupied the Kwantung Peninsula. Dubasov and here had his own opinion, so he landed at his own risk and risk on the island of Kargodo and the port of Mozampo, which are of strategic importance, and which previously held successful negotiations with local authorities. In his opinion, these objects reliably covered the Russian naval bases in the Pacific, threatening the Japanese in turn. Admiral Du, as the locals called him, was resolute, and telegrams about the arbitrariness of the squadron commander rushed to St. Petersburg one after another. As a result, he with a heavy heart had to leave the island and the port (which the Japanese were not slow to occupy) and land on Kvantun. “Having taken Port Arthur,” he wrote in the report, “we are already embarking on a path from which there is no turning. I do not want to be a prophet, but I think that this will inevitably involve us in great difficulties. ” He tries to draw the attention of St. Petersburg to the military preparations of Japan, but remains for the most part not heard.

In 1901, the vice-admiral was recalled to the capital, where they were put in charge of the naval committee, away from the porridge brewing in the Far East, where Dubasov could be so useful. However, he nevertheless took an indirect part in the war with Japan, leading the Russian delegation in the negotiations to resolve the "Hull incident" that occurred off the coast of Britain on the way of Admiral Rozhdestvensky’s squadron. Here Dubasov’s diplomatic skills came in handy, and Russia got out of the situation, retaining the face, for which the vice-admiral was granted an adjutant general. Remaining far from the terrible events that unfolded in the Far East close to him, he continued to bombard the military department with reports and analytical notes. Thus, when discussing the issue of concluding peace with Japan, the admiral advocated the continuation of the war, rightly believing that the enemy was already exhausted. And again it was not heard.

Staying away from the events unfolding in the Far East close to him, Dubasov bombarded the military department with reports and analytical notes. When discussing the issue of concluding peace with Japan, the admiral advocated the continuation of the war, rightly believing that the enemy was already exhausted. And again it was not heard.

The fire was extinguished by fire. 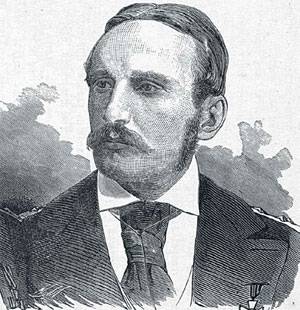 They remembered about him when the smell of roasting was already within the empire: the landowners' estates flared, excesses began. The loyal oath and the Tsar, the servant of the Fatherland is sent to suppress the rebellion in the Chernigov, Kursk and Poltava gubernias, where, acting decisively and sometimes tough, he leads the troublemakers to obedience. By the end of the year, the most difficult situation was in Moscow. Revolutionary lawlessness was going on in the city: there was a real hunt for policemen, gendarmes, guards, soldiers; a day did not go by without being killed or wounded. A group of drunken, armed terrorists loomed about the streets. Looting increased, shops and shops did not work, people were afraid to leave the house. In September, a general strike began in the city. Many were forced to strike.

As soon as Dubasov was appointed by the Moscow Governor-General, an open armed uprising broke out. But the naval officer did not blunder. A state of emergency is imposed, a curfew is announced. Loyal military units were summoned from the capital, a voluntary people's militia is organized, patriotic citizens are activated, ready to rebuff the militants. Dubasov appeals to Muscovites with a promise to restore order, mobilizing them to fight. Having come to the aid of an exhausted policeman, the townspeople, under the protection of the troops, begin to dismantle barricades, detain robbers and marauders.

However, time was lost, in some areas of the city street fighting was already in full swing. The revolutionaries acted meanly. Having struck in the back, they hid in doorways, dissolving among the peaceful citizens. Only in the area of ​​the infamous Krasnaya Presnya, 45 policemen were killed and injured.

In the Soviet press, Admiral Dubasov, who suppressed the Moscow uprising, was called the bloody executioner, the strangler of the revolution. And how was it really? Sometimes, behind clear orders and categorical requirements, there was a Christian feeling of a true peacemaker, who did not want to waste blood. Thus, the Governor-General ordered the troops arriving from St. Petersburg, in spite of the instructions they received, not to open fire in vain, not to subject residential buildings to artillery fire. Dubasov insisted that the militants who handed in weapons were not shot on the spot, but handed over to justice. Immediately after the suppression of the insurgency, a fund of gratuitous donations to the victims was created. From his pocket Dubasov allocated seven thousand rubles to encourage police officials who took an active part in the suppression of unrest.

Yes, the admiral’s actions were harsh, but no matter how many people died, he would act less decisively. For comparison, it is worth remembering the victims of 1917's bloody rebellion of the year and its terrible consequences.

From love to hate

After the suppression of the revolt, the Dubasov was blacklisted by revolutionaries-terrorists. Several attempts were made on him, but God kept him. During one of them in the Tauride Garden, terrorists threw a bomb full of nails under his feet. There were a lot of walking people and children nearby, but this did not stop the “fighters for people's happiness”. To the credit of the admiral, he not only was not taken aback, but by grabbing a revolver, he opened fire on the attackers, turning them to flight.

The love of the people of Dubasov was no less sincere than the hatred of the bombers. After one of the attempts, more than 200 telegrams came to his address with words of support from all strata of the population: from the king to ordinary citizens. Among them was the following: “Two small children thank God for delivering you from danger and pray for your speedy recovery. Yura and Katya.

The Savior of the Fatherland was promoted to full admiral and appointed a member of the State Council. He was granted one of the highest orders of the empire - St. Alexander Nevsky, and Dubasov continued to work for the good of Russia, forgetting the offenses inflicted on him and taking down the reproaches while restoring his beloved fleet. His last work was the active participation in the construction of the Church of the Savior on Waters in memory of the sailors who died in Port Arthur and Tsushima.

Dubasov died two days before the 67 anniversary. He was buried in the cemetery of the Alexander Nevsky Monastery. The day after the burial in the Life Guards Semenov regiment, a memorial service for the newly-reposed soldier Theodore was served.