17 2016 June
38
As part of the creation and development of technology for the airborne troops, a new modification of the Sprut-SD self-propelled anti-tank gun was developed. To date, the updated machine called "Sprut-SDM1" came to the test and passes all the necessary checks. In the foreseeable future, this self-propelled gun may be put into service, followed by serial construction and supply of equipment by the troops.


The existing 2S25 Sprut-SD armored vehicle was developed from the mid-eighties, however, for various reasons, it was adopted only in 2006. The project involved the use of the existing Object 934 tracked chassis, on which a new fighting compartment was to be mounted. The self-propelled guns / SPTP "Sprut-SD" is equipped with a 2A75 smooth-bore gun of 125 mm caliber, which makes it possible to use the same ammunition as in the case of existing weapons tanks. Relatively small dimensions and weight allow parachute landing of equipment.

Serial production of the Sprut-SD cars was conducted from 2005 to 2010 year. After that, it was decided to suspend the assembly of new equipment until the new draft of the modernized self-propelled gun appeared. The new draft of the updated self-propelled gun received the symbol 2C25М Sprut-SDM1. It was developed by specialists from several enterprises of the Tractor Plants concern. The objective of this project was to increase the main combat characteristics through the use of a number of new equipment, primarily, other sighting devices and fire control devices. In addition, it was proposed to refine the existing chassis with the extensive use of existing components and assemblies, aimed at maximum unification with other equipment of the airborne troops. 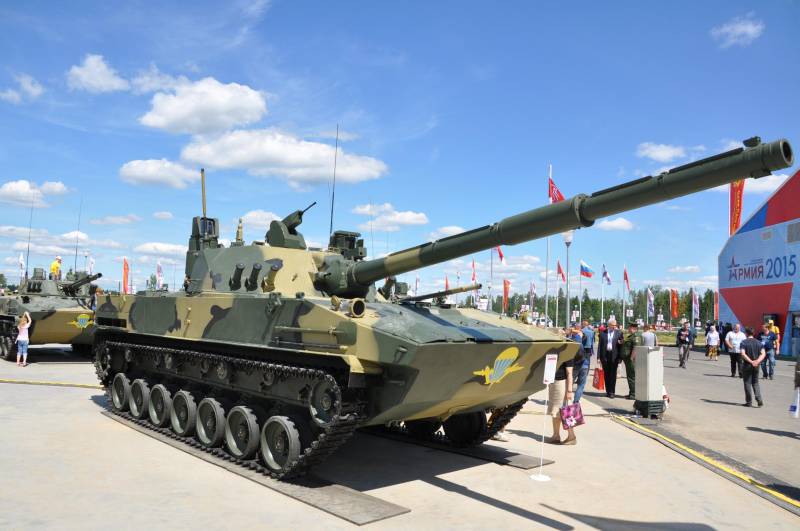 As part of the modernization of self-propelled guns, it was decided to keep the existing armored units. The hull and the tower of the original and the modernized machine almost do not have differences. The applied improvements have touched only some details and are associated only with the need to use new nodes. The overall architecture, layout and other features of the machine, however, did not change.

The most noticeable external difference of the Sprut-SDM1 SPTP from the base Sprut-SD is the use of the new running gear. In order to simplify and reduce the cost of simultaneous production of several samples of equipment for the airborne forces, it was decided to equip the self-propelled gun with a chassis based on the units of the BMD-4M airborne combat vehicle. It is noteworthy that such a unification does not have a significant impact on the overall parameters of the chassis of a new car. After the update, the self-propelled gun gets seven small diameter road wheels with an individual torsion bar suspension and hydraulic shock absorbers on each side. Saved ability to change the clearance by adjusting the parameters of the suspension.

Also included in the chassis are stern drive wheels for tsevochnogo gearing, front guides with a tension mechanism and several supporting rollers of small diameter, designed to hold the upper branch of the caterpillar in the correct position.

The unification of the latest technology for the airborne troops also affected the power plant and transmission of the new self-propelled anti-tank gun. The Sprut-SDM1 machine receives a new UTD-29 type diesel engine with an 500 horsepower. instead of the original 450-strong 2B-06-2. Also, the self-propelled gun gets a transmission borrowed from the existing airborne assault vehicle. Such improvements to some extent increase the power density of self-propelled guns and, as a result, should have a positive impact on its mobility.

Significant improvements in the modernization project has undergone combat compartment. According to reports, the Sprut-SDM1 ACS / SPTP receives an updated fire control system with a number of new systems and sighting equipment with enhanced characteristics. Now the machine has a combination of sights with television and thermal channels, allowing the use of weapons at any time of the day. It also provides automatic target tracking, which increases the overall combat performance.

The new electronic equipment of the updated machine includes communications equipment integrated into a single tactical level control system, which allows the crew to transmit data on various targets to other machines, as well as receive target designation and other information. Such equipment is designed to improve the efficiency of joint combat work of several self-propelled guns.

Due to the updated fire control system "Sprut-SDM1" retains the ability to use the existing range of ammunition. In addition, compatibility with programmable fuses of remote blasting on the specified part of the trajectory is ensured. Self-propelled guns can also use several types of guided missiles, launched from the trunk of the main gun.

The “main caliber” of the vehicle remained the same - the 125-mm gun 2А75, which represents the development of the tank system 2А46. A gun with a barrel length 48 calibers mounted on a stabilized system and can be induced in the horizontal plane in any direction. Elevation angles vary from -5 ° to + 15 °. The gun is equipped with an automatic loader, which independently feeds into the chamber a separate-loading ammunition of the required type. The “Sprut-SDM1” ammunition, like its predecessor, consists of 40 shells of various types. 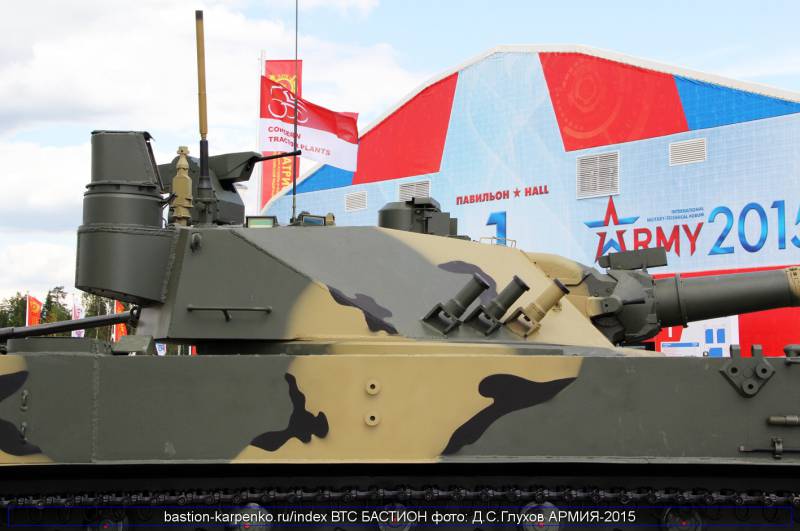 The new project involves the strengthening of additional machine gun weapons. One more similar is added to the 7,62 mm caliber mounted to the PKT caliber; weaponmounted on a remotely controlled combat module. The module is proposed to be mounted in the aft part of the tower; it should be controlled from the control panels of the fighting compartment. The boxes for ammunition combat module fits 1000 cartridges. The presence of an additional machine gun allows you to improve the ability of vehicles to self-defense against infantry and unprotected enemy vehicles, and the deployment of such weapons on a remotely controlled combat module, in turn, drastically reduces the risks to the crew.

The modernized self-propelled gun "Sprut-SDM1" has a combat weight at the level of 18 t. The dimensions of the machine in comparison with the basic version have not changed. Mobility also remained at the current level. The maximum speed on the highway is 70 km / h. With the help of feed water jets, self-propelled guns can cross water barriers by swimming at speeds up to 7 km / h. The car should be driven by a crew of three: driver, commander and gunner operator.

The first prototype of the new ACS / CTP 2C25М Sprut-SDM1 was built last year. Concern "Tractor Plants" for the first time introduced this machine to the public at the exhibition "Army-2015". At the same time, the main features of the new project were announced and some characteristics of the updated car were named. At that time, upgraded armored vehicles were considered as a replacement for existing vehicles.

A few days ago, a collection of airborne command and control personnel was held at the Struga Krasny (Pskov Region) training ground. Airborne commanders were able to share experiences and learn the latest news in the field of artillery. In addition, during the gathering, a demonstration show of the new Sprut-SDM1 demonstration took place with shooting. The press service of the Ministry reports that during the demonstration shooting not only the new self-propelled gun was used, but also some aids. Thus, unmanned aerial vehicles "Orlan", as well as the radar stations "Aistenok" and "Sobolyatnik" took part in ensuring the firing with the help of target designation and fire adjustments.

According to reports, a new type of self-propelled anti-tank gun is undergoing tests and is not yet ready to start serial production in the interests of the airborne troops. Nevertheless, the authors of the project are already making plans. According to the domestic press, the Sprut-SDM1 machines should go into series in the 2018 year. Soon after, the troops will be able to get new armored vehicles with enhanced combat performance. According to recent reports, representatives of the Airborne Forces have already familiarized themselves with the new self-propelled gun. This event, as well as the continuation of work on a new project in one way or another, is accelerating the adoption of new technology.