Why is communism a good choice for Russia? 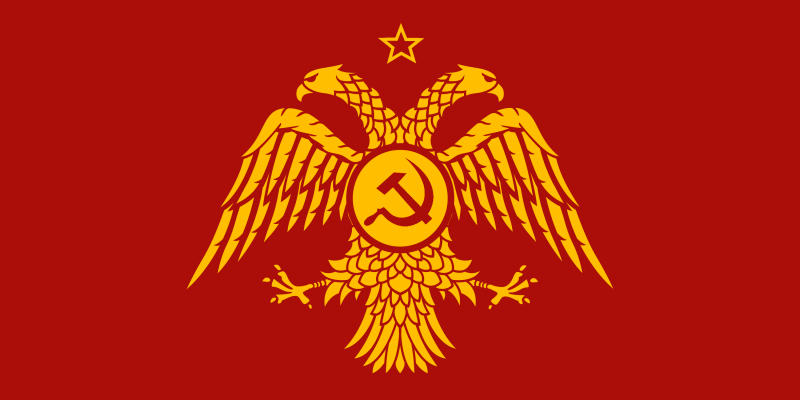 I am 34 of the year, and I managed to catch the Soviet Union. I remember well how I stood in line for milk and bread, did not forget the empty stalls in the shops, decorated with pyramids of cans of sea kale, crowding in public transport. 90-e became the time of initiation to the American dream through watching Hollywood films and programs “America with Mikhail Taratuty”. I grew up with pro-Western views and rather a negative attitude towards the past of my country, including thanks to the work of people like Solzhenitsyn and the liberal get-together that seized media channels in those years. Next - higher education in a prestigious provincial university, work and study in the United States on a student visa, where several foreign languages ​​were learned and deepened professional skills, returning to Russia, some successes in work, several years as a middle manager. It would seem that what could be the prerequisites for becoming a communist in the existing personality, firmly embedded in the existing system?

Having worked for several years in business and near-government structures, I came to the following conclusion: in Russia, the American dream and its Russified versions are not feasible. Now in Russia there is a capitalist system in operation, where a narrow stratum of rich people, who are becoming richer, exploit the majority, which is getting poorer every year. The only thing that can be said for sure about the future of Russia: this trend will continue. At the same time, the owners of capital cannot ensure real economic growth, which is so necessary for the country, for which it would be possible to come to terms with such social injustice. 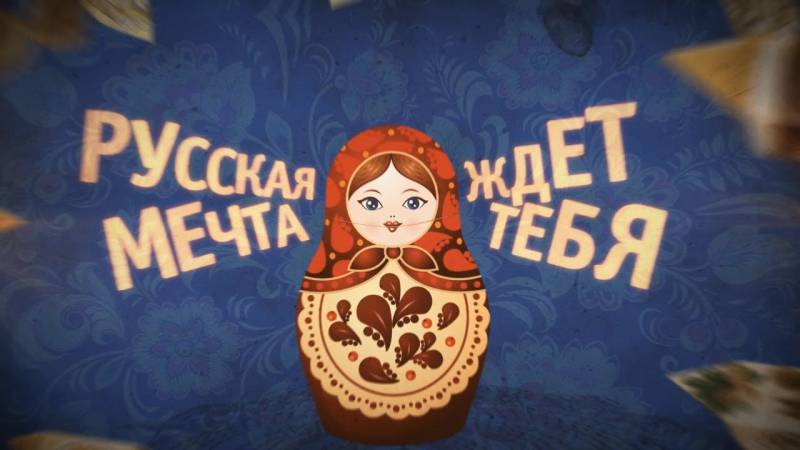 As for the Russian versions of the American dream, I divide them into three types. So, the expectation of number XXUMX: working a lot and honestly, you can climb high on the corporate or powerful career ladder, becoming a “successful” person. However, betting on career growth is too risky. Much more likely to be left with nothing, because in order to break through to the next level, sooner or later you will need not personal talents, skills and hard work, but suitable parents and their connections, often the right nationality, the correct political coloring and timely rollbacks. And even having avoided such obstacles, after twenty years of work, all this can be lost in one day. For example, having made an erroneous bet in a career carnage massacre, or simply because a new chief has come, who puts in the leadership of his people, and gets rid of the former. Scenario No. XXUMX of the American Dream of the Russian Spill: to become an entrepreneur, while producing, selling or reselling something, joining the ranks of the petty bourgeoisie. The problem with this scenario is that, on the one hand, our state does not particularly favor this stratum, putting pressure on taxes and administrative barriers, and on the other hand, it pushes large businesses that work closely with the authorities of different levels. Therefore, the chances of success here are also small. And finally, the dream №1: to invent or implement something, to create a large company, becoming the head of it, thus moving into the capitalist class. The difficulty is that this requires initial capital, and the era of its accumulation in Russia ended in the nineties. Now at the top of the place is occupied, and getting into the ranks of the capitalists, pulling up the coveted cylinder, it is very difficult.

Do not misunderstand me. Any of these scenarios can come true, as can the scenario where you win a million dollars. However, in essence, the current capitalist system is a scam, where very few people get very much, and most think that they have not received much by some ridiculous accident, and that the situation is about to change.

In the long run, such a system is losing both for individuals and for the whole country. This is due to the fact that in today's globalized economy, Russia has a very definite place — the role of a raw materials appendage of industrial centers in Europe and Southeast Asia. Only those who are in power, sitting on a pipe, or serving these two categories will live well. There are no prerequisites for an economic take-off that will increase the welfare of the population and re-enable social elevators

Liberal reforms associated with a decrease in corruption and the democratization of society will not become a springboard for the jump in the Russian economy. Firstly, it will not change the basic layout of the global economy, where we are assigned the role of the raw material base. Secondly, the leading economic powers of the West will not cease to consider our country as big and dangerous and will not cease attempts to break up into more manageable and tasty morsels. Thirdly, in capitalist economies for a rapid leap it is necessary to inject capital from outside. No special money will be given for the first two reasons, so there is no place to wait for growth.

Thus, neither Prokhorov, nor Navalny, nor Zhirinovsky, nor Medvedev, nor Mironov, nor Putin can fundamentally change the real state of affairs in the Russian economy, because they will act within the framework of the existing capitalist paradigm. In the same way, a cleverer czar-father could not have saved the Russian empire at the beginning of the twentieth century if it had not turned itself into a souvenir czar like modern British monarchs.

Why is communism better than capitalism? At least by the fact that communism is the inevitable successor to the capitalist system. Capitalism replaced the feudal society thanks to technological progress — workers in enterprises were needed, and in agriculture, on the contrary, less — by increasing the efficiency of labor. Now, thanks to automation, the need for workers gradually disappears. The capitalist, increasing profits, should automate production, reducing the number of workers. However, who will buy goods if few work? There is only one way out - to increase tax payments to the government. The state will pay unemployment benefits, creating hereditary sybarites, or invent ballast jobs, multiplying rows of guards, accountants and lawyers. This is a form of socialism, and the majority of European states have already come to it to one degree or another.

Planned economy is much more efficient than capitalist in the implementation of ambitious projects and leaps forward. That is why the USSR managed in record time to raise the economy after the civil war, having defeated the economic and military might of Hitler-united Europe in the Great Patriotic War. The Soviet system revolutionized the average level of education of its citizens by conducting a grandiose educational reform. Due to these factors, the Soviet Union in the shortest possible time created a nuclear weapon and ways of its delivery to any point of the Earth, ensuring the security of the country for at least a century ahead. The same mechanism of a planned economy was able to launch man into space and bring the economy of the USSR into second place in the world. Similarly, communism will be able to bring Russia out of the economic impasse in which it found itself, having trusted, as we now understand, to a calculating enemy.

During his reign, the Communist Party and its leaders made a number of mistakes. Most of them (voluntarism of Khrushchev, the cult of Stalin's personality and political repression) were condemned by the party. However, this does not cast a shadow on the very idea of ​​communism, since the problems of communism in the USSR are the problems of the growth of a new system in a hostile environment. Despite the collapse of communism in Russia, the current largest economy in the world, the PRC, is managed within the framework of a planned economy with amendments to the surrounding capitalist reality.

Every year, a planned economy is becoming an increasingly real alternative to capitalism, since the prerequisites for its growth are more and more obvious - automation and computerization of the economy. Automation of production frees workers who are not able to adequately employ capitalism. A planned economy will be able to direct this released resource to more promising areas, for example, the construction of new plants or retraining to control, for example, robots or programmable machines. Informatization will optimize production planning and distribution of goods. For example, with the current level of information technology development, the scourge of communist systems can be eradicated - deficiency and corruption associated with it. The movement of any item can be tracked through the bar or QR code in a single product database, placing orders for the production of products automatically, optimizing logistics and building mathematical models of demand forecasts for hundreds of thousands of items.

Given the experience of past successes and mistakes, the overall level of well-being of Russian citizens in a planned economy will be higher than under capitalism. The state is interested in the welfare of its citizens in any economic system. But with a planned economy in the hands of the state all the tools are concentrated to implement this. In the capitalist system, most of the property is concentrated in the hands of the capitalists. They are not so much interested in raising the standard of living of citizens, but in their own profit.

What should individual citizens do? Join the Communist Party, one or another. Sooner or later, Putin will appoint a successor to himself and try to make sure that the people accept him. When choosing a successor, he will reckon with the mood prevailing in society, so the mood must be announced. As for the transition to a planned economy, this historical inevitability, and the more people support this in society, the more likely our leaders will take up this transition. 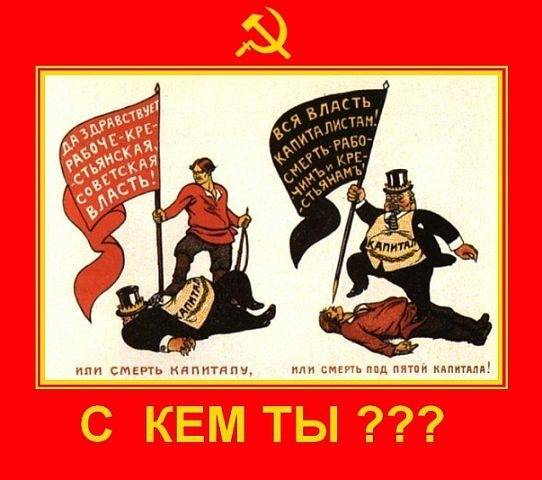 Ctrl Enter
Noticed oshЫbku Highlight text and press. Ctrl + Enter
We are
About Stalin and KhrushchevHow can Russia survive and win in the 21st century?
Military Reviewin Yandex News
Military Reviewin Google News
530 comments
Information
Dear reader, to leave comments on the publication, you must sign in.