Russia and the United States in a fight for neutral Turkmenistan

17 2016 June
28
Is it difficult to be a neutral state in the modern world? Oh, how difficult ... Gone are the days when a country in the world could constitutionally register its military neutrality, saying something from the series "I'm in the house." And if by and large, so in historical retrospective of really “capable” of military neutrality of states was not at all a lot. Even Sweden and Switzerland are well aware that their “neutrality” during the Second World War was very conditional, and that at least the banking system of the states was used not only for transactions with unambiguous transparency.

In the face of growing tensions in the world, given the fact that a well-known state is trying to remain the only pole on the planet, the issue of state neutrality is particularly acute. And only a constitutional measure for the announcement of its “military neutrality” is unlikely to provide real neutrality for almost any of these states.

After the collapse of the USSR, it was fashionable, if I may say so, to declare oneself non-aligned. First of all, this concerns the former republics of the Soviet Union and some countries of Eastern Europe. They say that we are free from the “communist yoke”, we are not going to join NATO, and therefore we prescribe a neutral status in the constitution - vivat, democracy, disarmament, peace, friendship and stuff like that. As examples: Ukraine and Turkmenistan.

This “fashion” can be partly connected with the oral promises of Western “partners” given to Mikhail Gorbachev. The fact that NATO promised not a centimeter to the East ... We, they say, now friends do not spill water ... Gorbachev then, as you know, signed where he was needed by “partners”, he put it in exchange for everything the same verbal promises; MA-LA-DETS! .. After some time, the oral promises of the “partners” suddenly became forgotten, and they asked the individual “neutrals” about whether they wanted to integrate exclusively at the level of a non-binding partnership. As a result, new agreements were signed, and the military bloc began to spread eastward, in parallel, making it clear that the neutrality of individual countries as a fact to him (the block) is not entirely clear ...

Now, as is well known, Kiev expresses its irresistible desire to join the Western military alliance. But yesterday, Ukraine also positioned itself as a non-aligned (de facto neutral) state, although it did not disdain to send its units, for example, to Afghanistan.

And ever since the question of the abolition of non-aligned status began to be actively exaggerated on Maidan Ukraine, the United States also began to think about the need to deprive the non-aligned status of another former Union Republic - Turkmenistan. In 2014-2015, American delegations began to fly more often to Ashgabat, and to Washington - Turkmen delegations. The agenda is a “strategic partnership” under the well-known Western fable about the “threat from Russia”, and also under the fact that “after the withdrawal of the American troops from Afghanistan”, the Turkmen Armed Forces may have something military-technical.

From the statement of the government of Turkmenistan of October 2015:
Turkmenistan views the United States as a strategic partner and attaches great importance to deepening cooperation with this country.

Then, as it was stated, cooperation issues were discussed both in the economic sphere and in the field of security. Washington seems to have promised Ashgabat to take into account its concerns about the growing threats from radical groups in Afghanistan. What is the "taking into account" in the end resulted? - while the question. The only thing that has become known is the official Ashkhabad’s refusal to accept the head of the Russian defense ministry, Sergei Shoigu, in Turkmenistan, who intended to visit the Asian republic in 2015. There were no special explanations on this issue then, and a completely obvious slap in the address of Russia then was, as they say, lowered on the brakes, apparently, so as not to aggravate.

Turkmenistan announced that it is organizing a partnership with the United States in terms of countering drug trafficking. On US embassy site The following message appeared in Ashgabat:

Everything seemed to indicate that “neutral” Turkmenistan is no longer neutral, making its choice in the direction of the United States.

However, a few days ago an event occurred that, among other (very important), even the major Russian media decided to bypass their attention. We are talking about the visit (albeit with a deviation of several months from the original plan) of Russian Defense Minister Sergei Shoigu to Turkmenistan. Attention is drawn to the fact that the head of the Russian military department was received not only by his Turkmen counterpart, but also by the president of Turkmenistan.

From the press service of the presidential administration of the country (quote www.turkmenistan.ru):
President of Turkmenistan Gurbanguly Berdimuhamedov received Minister of Defense of the Russian Federation Sergey Shoigu, who arrived in Ashgabat.

The head of state and his guest exchanged views on the prospects for Turkmen-Russian cooperation, noting the constructive intergovernmental dialogue, as well as successful cooperation in a multilateral format, in the framework of international and regional organizations.

A special topic of discussion was the partnership in the areas of strengthening regional and universal security, countering global challenges and threats of our time, including terrorism and extremism.

Topical issues of bilateral military and military-technical cooperation, as well as problems of regional and global security were discussed.

Promising areas of deepening Russian-Turkmen cooperation in the military field were identified, concrete steps were agreed to strengthen the Armed Forces of Turkmenistan.

First of all, it concerns the provision of their compatible weapons and military equipment, training of military personnel. 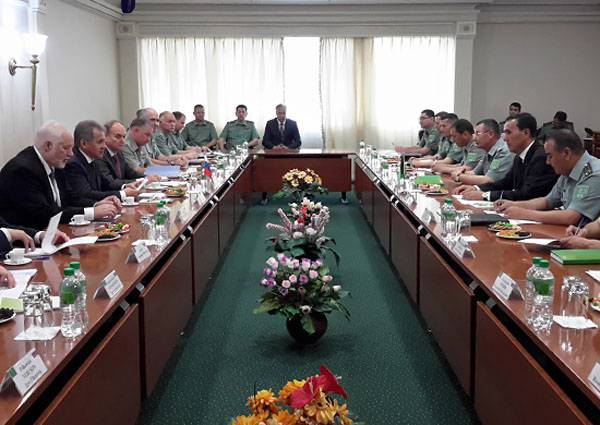 Against this background, the press service of the head of the Turkmen state reports that Sergei Shoigu declared "deep respect for the neutral status of Turkmenistan." According to the Russian Defense Minister, the neutrality of Turkmenistan is an important factor in maintaining peace and stability in the region.

Translated from diplomatic to household, it looks like this:
Gentlemen Turkmen partners! Perhaps this is not our business, but if neutrality is registered in your main document, so what, excuse me, is it for American specialists to work out a security system? Do you think that the status of neutrality requires a slightly different approach to the issues of interstate relations and obviously cannot be based on one-sidedness? ..

And just a few days after the Russian Defense Minister’s visit to Ashgabat, the Turkmen parliamentarians went to Moscow. The official purpose of the visit is to familiarize with the organization of parliamentary activities in Russia. Moreover, the Turkmen guests were invited by the Russian side. The head of the delegation is the chairman of the Mejlis, Akja Nurberdyev. She held a series of meetings with Russian politicians - Sergey Naryshkin and Valentina Matvienko (chairmen of the Lower and Upper Chambers of the Russian Parliament). After the end of the visit, during which agreements were reached on the need to strengthen Russian-Turkmen relations, the head of the Turkmen parliament reportedly informed Gurbanguly Berdimuhamedova.

Turkmen authorities have received a clear signal from Russia about the fact that neutrality in the modern world should not become a bargaining chip and a kind of green light for those who sleep and see a flaming cauldron in Central Asia.

The main thing here is not to forget that excessive assertiveness in Eastern affairs can be detrimental, but a methodical dialogue with Ashgabat in order to prevent the very possibility of the spread of influence in the region from the main chaos hotbed in the world - the United States is a matter of considerable importance. And it is unlikely that the Turkmen colleagues were not explained that the western “partner”, if he doesn’t succeed in realizing his interests in this or that state of the world, uses the worked-out reception of coup d'état for “democratic” cries of foreign-liver amateurs.

Ctrl Enter
Noticed oshЫbku Highlight text and press. Ctrl + Enter
We are
Situational analysis of the death of the MH17 flight (Malaysian Boeing 777), made on the basis of engineering analysis from 15.08.2014Results of the week. “You are already indebted to the sea: neither the bottom nor the coast”
Military Reviewin Yandex News
Military Reviewin Google News
28 comments
Ad