"Drive! I will delay them!" (About Ksenia Konstantinova)

17 2016 June
21
The name of the Hero of the Soviet Union Ksenia Konstantinova in Lipetsk is known. The square is named after her, there is a plaque on the building of the medical college where she studied. But, unfortunately, a well-known part of the biography of the heroine is very stingy. I will try to complement it with what I learned in my native village of Ksenia, Sukhoi Lubne.


During the Great Patriotic War, this village belonged to the Tambov province, and now to the Lipetsk district. Here 18 April 1925, in the peasant family, was born the future heroine. Dad - Semen G., mother - Arina Semenovna. My daughter was the firstborn, from childhood she grew up in labor, helping her parents. Ksenia did not differ in particular glibness or enthusiasm, but if it was required, she showed a downright masculine character. Once on the outskirts of the village she saw a boy surrounded by large dogs. The kid pressed against the fence. I couldn’t get on him - I was still small. It was literally five meters from the gate, but could not get it. Ksenia, who was about seven years old at that time, grabbed a stick and rushed to the defense of the little boy. I could not disperse the angry dogs, very soon she found herself beside the boy, pressed to the same fence, and even with her bitten leg. And then, in this minute full of fear and despair, the girl made the unexpected: she fell on all fours, as if turning into a dog for a moment, and growled desperately. The dogs recoiled, and Ksenia, without being taken aback, grabbed the little boy by the hand, darted to the gate and shoved him there. She herself did not have time: the dogs had already come to their senses and again closed the ring. But, fortunately, at that moment the men returned from the field works and dispersed the dogs.

The second day of the Great Patriotic War, sixteen Xenia met in the military. I asked to go to the front, even cried, but unsuccessfully — they weren’t allowed due to my young age. The second attempt (already in the 1942 year, it became still older!) Also turned into failure. And for the third time, Ksenia achieved permission. Relatives did not say anything, did not want persuasion and tears. And on the early morning of February 1943, she slowly left the house. I was even afraid to leave a note: what if mom will rush to the draft board?

Mom and rushed, barely guessed about the act of his daughter. Yes, it was too late. And soon I received a letter: “Sorry for me, mother, otherwise I could not do it ...” Actually, there was almost nothing in that short letter ...

Ksenia graduated from short-term courses for nurses and in the spring of 1943, she was enrolled as a medical orderly in the 3 battalion of the 730 rifle regiment of the 204 rifle division.

They fought on the Kursk Arc. And the foreman of the medical service, Ksenia Konstantinova, also fought. Her fellow soldiers told her that she was already twenty-five, and therefore there was nothing to spare and take care of. But the fighters looked at a thin girl and understood: up to twenty-five, she was far away. Were surprised by the forces: Xenia endured the wounded without getting tired, as if not feeling heavy. Once she pulled out a battalion foreman by the name of Zirdenko (both legs were smashed to him), who then claimed that he weighs one hundred and five kilograms.

In one of the battles, Ksenia was wounded by a shell fragment. She got into the Tula hospital, but did not lie down for a long time: barely standing on her feet, she ran off to hers. “How are they without me? - said the girl to the head physician. “After all, no one will pull them out of the battlefield, and they will lie there until our victory?” 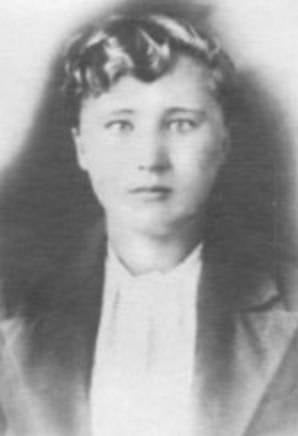 Again advanced. Fights again. Xenia, it seemed, never slept at all: she devoted every minute to the wounded. If it was not required to provide medical care, she wrote letters from dictation, combed fighters, shaved her, washed them.

In September, 1943, the division was transferred to the Vitebsk area. The battalion, in which Ksenia served, fought near the village of Uzgorka for the Smolensk-Vitebsk highway section. October 1 soldiers drove the Nazis out of Uzgork. There were a lot of seriously injured people, there was not enough medicine at all, and urgent help was needed. Many soldiers were unconscious, none of the wounded could walk. Ksenia walked to the medical battalion on foot, and returned already in the wagon. The fighters waited for their sister in a hollow. Xenia began to assist, and one after another carry the soldiers into the wagon. But there was not enough room for everyone, a few people still remained. It was decided that the sled now would take the wounded to the medical battalion and return for the others. The wagon had just started off, as a large group of Nazis seemed - about a hundred people.
- Hurry leave! - shouted Xenia. - We will delay them! Drive on

The carriage disappeared behind the bushes. And here, in the hollow, there were a few fighters who could not fight. The fascists did not see them - the hollow was deep, and people showed no signs of life. Therefore, no “we” actually existed, and Ksenia knew this. And she shouted so only to the sled not left, but left and saved the people.

The fascists were approaching like that old pack of dogs. Only one girl, almost a girl, with an automatic rifle in her hands confronted them. She ran from place to place, trying not to get hit by a bullet. And she took away the enemies so that the hollow became completely invisible to them. Fought to the last bullet. And even this last cartridge, which Xenia could have left for herself, realizing that the nazis would not leave her alive and would most likely be tortured, the girl spent on the enemy. One more was less ...

She was captured, completely unarmed. About eighty fascist survivors - she killed twenty. And this pack did not stop the punishment. She cut off Xenia's nose, chest, gouged out her eyes and nailed her stake to the ground. So our soldiers found her ...

And the wounded remained alive - that's all. 4 June 1944, Xenia Konstantinova awarded the title Hero of the Soviet Union. Where she died, now stands the obelisk. 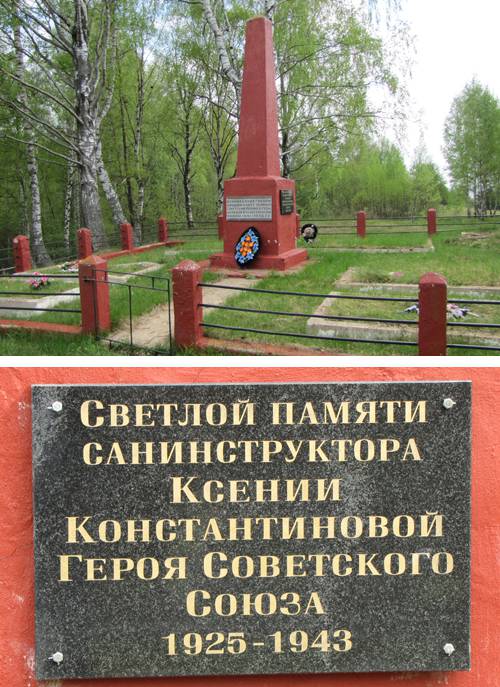