17 2016 June
150
The other day, Vladimir Putin received a letter. From R.T. Erdogan. The Turkish President congratulated the Russian leader on the Day of Russia and wished the relations of Russia and Turkey to reach a “deserved level”. At the same time, Turkish Prime Minister B. Yildirim sent a letter to his Russian counterpart D. Medvedev, where he also expressed hope that the two states would achieve the level necessary "for the common interests of our peoples." 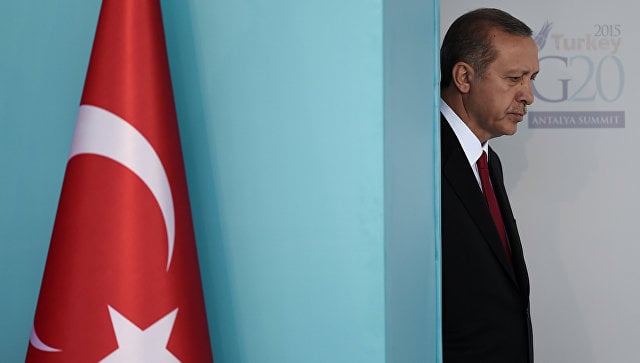 As reported by 14 Jun RIA News", Turkish President Recep Tayyip Erdogan wrote a letter to Vladimir Putin. The leader of Turkey congratulated the Russians on the past Day of Russia, and also wished the relations between the two states to reach a “deserved level”.

“Dear Mr. President! On behalf of all the Turkish people in your person, I congratulate all Russians on the Day of Russia, and I also wish that in the upcoming time relations between Russia and Turkey will reach a deserved level, ”the RIA news letter quotedNews».

From the Kremlin reported that the letter Erdogan was indeed sent. “The message came through the channels of the Foreign Ministry,” said Dmitry Peskov, press secretary of the Russian president.

There was also a second letter, which the Prime Minister of Turkey, Binali Yildirim, sent to the head of the Russian Cabinet of Ministers, Dmitry Medvedev.

Mr. Yıldırım expressed the hope that "in the coming time, cooperation and relations between our countries will reach a level that is necessary for the common interests of our peoples." Yıldırım also wished the Russians “well-being and prosperity”.

15 June in the Russian press there was a comment of the Turkish messages of the press secretary of the president Dmitry Peskov.

“This is a protocol message,” Peskova quotes. RBC. - Traditionally there is an exchange of such messages on the occasion of national days. This is a protocol and common practice in international relations. To our regret, there were no other, substantial moments in it ”.

According to the spokesman, it was the first official letter from Turkey after the situation with the Russian Su-24, shot down by the Turkish Air Force.

Putin will not respond to congratulations, writes Interfax.

The message that the President of Turkey sent to the President of Russia on the occasion of the Day of Russia does not contain points requiring an answer, said D. Peskov. Answering the question whether similar messages continue to be received in cases of aggravated relations between states, Peskov said: “Sometimes they do, and sometimes they don’t, it depends on the situation.”

“This year (a message from the Turkish leadership) arrived, but this is the first National Day after the attack of Turkey on our plane,” said the press secretary of the Russian president.

The message of Erdogan and the letter of the Turkish prime minister, we note, say that Ankara is urgently seeking rapprochement with Moscow. Tensions and losses from the lurching tourism industry are clearly worrying “neo-sultan”. Erdogan goes roundabout paths, not wanting to apologize for the tragedy in the sky.

Letters to Putin and Medvedev are not the first attempts to improve the spoiled relations. Recall that at the end of last month R.T. Erdogan stated that he was ready “to solve the problem in a relationship“ as soon as possible ”, but the trouble is: he doesn’t know how to approach it. According to him, he does not understand what the first step Russians expect from Turkey. Turks do not want to quarrel with Russia, on the contrary, they want to "develop relations".

As for Moscow, Ankara was explained there long ago that the first step should be an apology and compensation for the downed aircraft. But it seems that the admission of guilt is not at all in the style of "neosultan" behavior. To apologize is to admit your mistake and repent. Yes, even in public. And not just publicly: the whole world will hear a request for forgiveness. What sultan will go on it? In any case, not Erdogan. He never sinned in wisdom before. The rude, authoritarian policy line and the desire to make Turkey a super-presidential republic also speaks of Erdogan’s high self-esteem. But the problems in the economy, empty hotels in the country do not speak about success, but about the failure of the “Sultan's” policy.

Ankara's attempts to act letters commented BFM.ru Editor of the Problems of National Strategy magazine of the Russian Institute for Strategic Studies Azhdar Kurtov. According to him, the message of the President of Turkey "is not of significant importance."

“I believe that this letter does not have any significant meaning, and it is not worthwhile to attach any great importance to it. There are situations in national practice, national holidays or some kind of natural disasters, terrorist acts, when it is accepted, in spite of whatever relations exist between leaders, between states, to express either condolences or congratulate the heads of other states, which was done in the present moment turkey. The phrase allegedly contained in this letter that there is hope that Erdogan hopes for the restoration of normal relations with Russia, she does not carry much meaning. Stubbornly Erdogan does not want to admit the obvious and for his guilt, for his deed, for the downed Russian military aircraft. And without this, as Vladimir Vladimirovich Putin has repeatedly said, there can be no talk of progress. ”

Turkish political scientists tend to blame for the deterioration of relations between Russia and Turkey, some external forces. “In recent years, political and economic relations between Turkey and Russia have been important and strategic. In order to understand the situation as a whole, it is necessary to figure out who could have been harmed by projects such as the Turkish Stream, the construction of a nuclear power plant in Turkey according to the Russian project, ”he quotes Utro.ru Najie Celine Shenojak, Head of the Diplomatic Center for Strategic Studies and Head of the Department of Cultural Diplomacy, University of Paris.

The European Union is also agitated by the topic of tense relations between Russia and Turkey. Erdogan's letter became an occasion for interviewing experts. For example, "Deutsche Welle" She took an interest in the opinion of the editor-in-chief of Russia in Global Affairs magazine, the chairman of the presidium of the Council on Foreign and Defense Policy, Fedor Lukyanov.

The expert believes that this letter to Putin is an attempt by the Turkish leader to demonstrate that Ankara “wants to turn the page in relations with Russia” and return to normal working relations. However, letters are not enough to normalize relations, Lukyanov said in an interview with DW.

He further recalled that in the Kremlin they had repeatedly spoken about their expectation from the Turkish side of an official apology and compensation for the family of the deceased pilot and for the downed plane.

Moscow is ready to discuss the resumption of relations, Lukyanov admits, however “I think it’s impossible to do without apologies and publicly admitting mistakes from Turkey,” the chairman of the Council on Foreign and Defense Policy noted.

Recall, the relations of Russia and Turkey fell into a period of serious crisis after the tragedy in the sky, which occurred in November 2015, when the Turkish fighter shot down the Russian Su-24 in the sky over Syria. The Turkish side assures the world community that the plane violated its airspace, and Moscow denies this.