16 2016 June
55
The only Russian aircraft carrier "Admiral Kuznetsov" goes to the raid after passing the procedures of maintenance, re-equipment and bringing to technical readiness. All these procedures were carried out by a heavy aircraft-carrying cruiser at the 35-m ship repair yard. What reports press office Ministry of Defense of the Russian Federation.


Exit to the raid is planned, including with the aim of starting training flight crews deck aviation. By July 1, it is planned to complete all preparatory activities for conducting such training exercises.

From the message press service The main military department of the Russian Federation:
The ship embarked on a barrel in the North Sea roadstead. After replenishing supplies to the required standards, he will go to the Barents Sea to work out course tasks for combat training.

In the near future, the crew of the aircraft-carrying cruiser will carry out an inspection of the mechanisms and technical means that were serviced during the planned measures for the restoration of technical readiness. 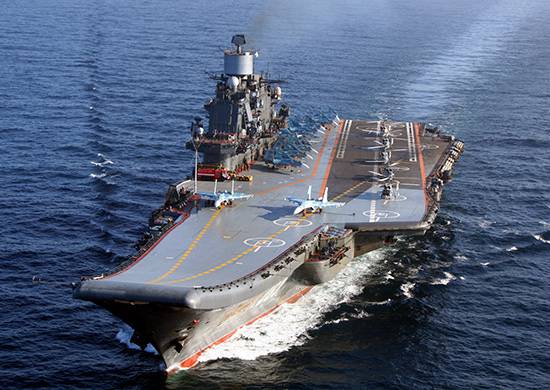 It is added that while on the roadstead, measures of preparation for the exit to the combat training grounds, verification of the readiness of the weapons and technical equipment of the ship for operations at sea will also be worked out.

For your information:
TAVKR "Admiral Kuznetsov" was laid in September 1982. Commissioning took place in 1991. Crew - about 2000 people, including more than 500 officers fleet.

Ctrl Enter
Noticed oshЫbku Highlight text and press. Ctrl + Enter
We are
The action “Military service under the contract is your choice!” In Rostov-on-Don: future contract servicemen, exhibitions and “Russian Knights”In the Northern Fleet will be large-scale exercises with the participation of the aircraft carrier “Admiral of the Fleet of the Soviet Union Kuznetsov”
Military Reviewin Yandex News
Military Reviewin Google News
55 comments
Information
Dear reader, to leave comments on the publication, you must sign in.