16 2016 June
88
The Kalashnikov Concern, whose main production facilities are located in Izhevsk, revealed information about its new model, the AK-400, which was developed by the company's specialists and is being offered to arm the elite Russian special forces, which include the Special Purpose Center "Alpha"), as well as the Presidential Security Service. It is reported that the new machine is a further development of the Kalashnikovs of the so-called "hundredth" series, while the AK-400 is offered in several versions for different cartridges.


It is reported that for the first time the AK-400 assault rifle was presented at a closed meeting organized by the Presidential Security Service at the end of 2015, where the novelty aroused interest from representatives of the security forces, and now this sample of automatic weapons is being studied by potential customers, which are the special units of the FSB and FSO of Russia. In particular, the newspaper "Izvestia" wrote about this 19 in May 2016, citing its own source in the Russian military-industrial complex.

Another Izhevsk machine gun, AK-12, which was previously proposed as a promising development for inclusion in the combat equipment of the new generation “Ratnik”, does not fully meet the requirements of elite Russian special forces. AK-12 is an army weapon, the weapon of infantrymen and paratroopers. Special forces soldiers need a more compact machine, which, on the one hand, would not be inferior to AK-12 in accuracy and accuracy, on the other hand, would be small enough so that it could successfully storm houses, trains, airplanes and buses , parachute jumping, etc. 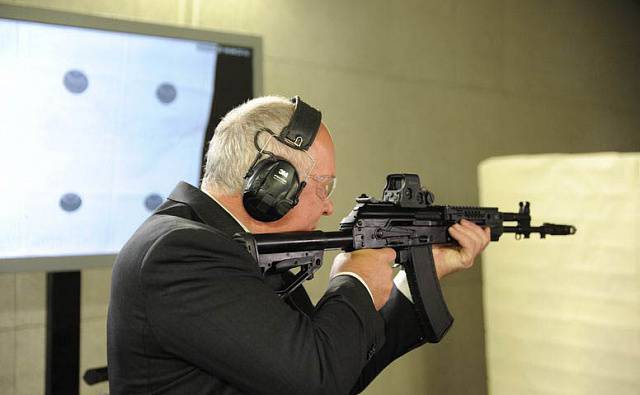 At the same time, the AK-400 proposed by the special services is an “adaptive” machine gun, since it allows the fighter not only to mount any sight, laser designator or tactical flashlight on the weapon, but also to regulate their position depending on their own physiological features. It is expected that the total length of the machine will be no more than 940 mm, and it will weigh slightly more than 3-x kilograms. Of the interesting features of the machine, one can distinguish the appearance of the “cut-off” shooting mode, which allows firing bursts of 3 shots. Also AK-400 was equipped with a telescopic folding butt. A fighter can quickly shorten or lengthen the butt, and having fully folded it, he will receive a very compact automatic weapon, which is conveniently handled both in the car and in close enough rooms.

The American Larry Vickers, a former fighter of the 400 Specialty Detachment Delta and a rifle instructor of the American army, who currently has his own gun video channel Vickers Tactical on YouTube, got the opportunity to familiarize himself with the AK-2016 submachine gun. It is worth noting that Vikkers is a long-time fan of Russian small arms. Today, on its channel you can find a sufficiently large number of videos about the newest models of Russian weapons, such as AK-1 and AK-12 assault rifles, PL-107 pistol, CB-14 rifle and many others.

On his Vickers Tactical 2 channel in May 2016, he published an 2,5-minute video that tells about the characteristics and features of the AK-400, and also demonstrates firing from a new machine gun. The first conclusion that can be made by watching this video is the profound modernization of the Kalashnikov assault rifle, as well as the creation of a whole family of four-hundred-series models. In all likelihood, it will include a new light machine gun, which has the code name RPK-16 (with a weighted barrel, bipod and drum magazine). This weapon was presented in the “Serving the Fatherland” program last fall. In addition, the AK-400 is created in two calibers at once: under the more modern low-impulse cartridge 5,45x39 mm and the old Soviet cartridge 7,62xXNNUMX mm model 39 of the year. The sample automat that Larry Vickers tested had a caliber of 1943 mm and weighed 7,62 kilograms with a total length of 3,1 mm. The rate of fire of the machine is 942 rds / min, like most modern AK variants.

Apparently, the AK-400 compact machine of the so-called “100th series” was selected as the base model for the AK-104, which was extended to the size of the ordinary AK-74М, but has a number of design changes. First, the new polymer telescopic butt, which is adjustable in length and folds to the left, immediately attracts attention. It was borrowed from a modernization kit for Kalashnikov assault rifles, KM-AK, which was developed by the concern on its own initiative in the framework of the RV “Obves” according to the technical specifications of the Ministry of Defense of Russia.

The idea of ​​installing a similar butt on a machine gun is far from new and has been practiced for a long time by many foreign firms, such as CAA, FAB Defense, Magpul, and many others. Also, the machine has a new ergonomic pistol grip, which is made hollow and can be used to store accessories for cleaning weapons. The AK-400 automaton creators and the receiver cover, which was made in the AKC-74U flip-up cover style, reworked thanks to better stability and the presence of the long Picatinny mounting strip MIL-STD-1913, it can be used to mount various day and night optical equipment on the machine, as well as collimator sights. Picatinny strips of the same length, but shorter, are located on the recycled plastic forearm of the submachine gun, giving the fighter the opportunity to attach various accessories to the weapon in the form of laser targets, tactical flashlight, grips, laser shooting simulators, etc. Thanks to these solutions, the AK-400 will allow the fighter Avoid unnecessary trouble with “tuning” weapons.

Like the AK-104, the front sight on the AK-400 was transferred to the gas chamber, like most modern western assault rifles. Finnish gunsmiths introduced a similar decision on the machine Valmet Rk.62, which was adopted by the Finnish army in the 1962 year. On the AK-400, the sector sight gave way to a diopter sight with reversible one, located in the rear part of the receiver. A new muzzle brake compensator appeared on the machine, which allows foreign-made rifle grenades to be shot off. With the same purpose, a two-position regulator was included in the design of the side gas engine, which additionally facilitates cleaning the gas chamber. 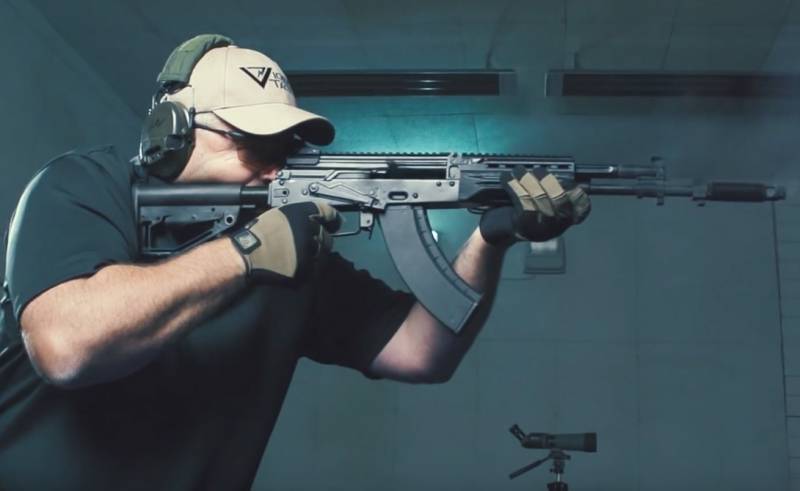 The trigger mechanism used on the AK-400 machine allows you to fire with a cut-off of the 3 shot. Accordingly, the firing mode switch has 4 positions: A - automatic fire, 3 - fire in bursts of 3 cartridge, 1 - single fire, P - fuse. At the same time, the “cut-off” mode has become a standard solution for the machine, rather than an optional feature. The power supply of the machine is carried out from the standard sector stores, designed for 30 cartridges. Despite the fragmentary and scarcity of the information available today, the new machine makes a pleasant impression on the experts. In particular, all4shooters.com noted that AK-400 used the best foreign and Russian developments in the field of modernization of AKM / AK-74 / AK-100 families, and also demonstrated very good stability of the weapon when driving automatic fire from a standing position , even when using cartridges caliber 7,62х39 mm.

It is noteworthy that a new version of the Kalashnikov assault rifle appeared on the eve of the fall, when the Russian Ministry of Defense should finally decide which of the samples was Izhevsk AK-12 designer V. V. Zlobin or Kovrov AEK-971 (А-545 / A -762) will be selected according to the results of state tests for further use in the framework of the construction of a set of combat equipment "Warrior". At the same time on the tests conducted "four hundredth series" demonstrates its superiority. The arrows emphasize the extraordinary accuracy and accuracy of the weapon. According to their reviews, AK-400 surpasses both AK-74 assault rifles and modernized AK-12, which are in service.

At the same time, both AK-12 and AEK-971 have already been criticized by customers from the Russian Ministry of Defense because of their high cost. In particular, it was said that they both "significantly outperformed regular samples, for example, AK-105". In this regard, the desire of the Kalashnikov concern leadership to have an inexpensive and modern alternative that can be interesting for export and, after appropriate changes, for the civilian market of small arms becomes clear. Probably, the appearance of the AK-400 assault rifle was also a consequence of serious technological and personnel changes in the concern’s policies that have been observed over the past two years. In particular, with the arrival at the enterprise of the chief designer, Deputy General Director S. V. Urzhumtsev, who previously headed the Molot plant, to whom the success of the family of carbines and rifles “Vepr” rather popular in our country, in the designs of the Kalashnikov concern there was more practicality and meaningfulness. 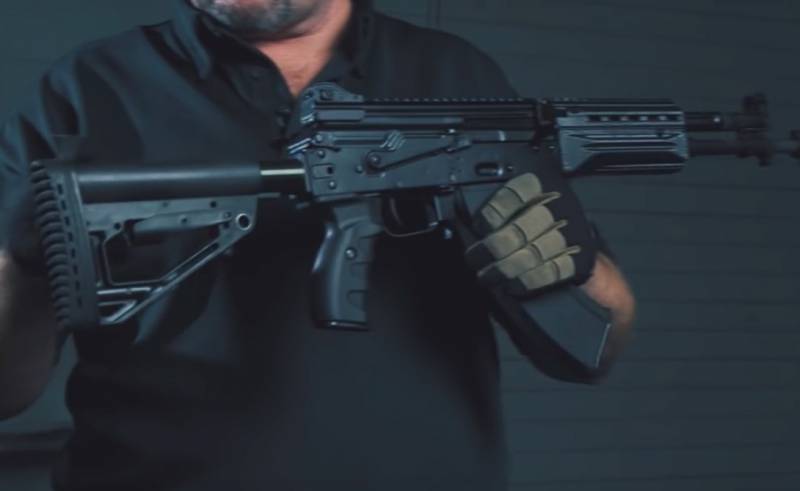 Unlike special automata according to the bullpup AC-1 / AC-2, as well as AK-12, which were created in a hurry, AK-400 seems to be more rational, as it appeared in a natural evolutionary way, representing a reincarnation of earlier projects of the concern. Already, the weapons that are being offered to representatives of the special services may turn out to be much more interesting than the AK-12 and AEK-971 assault rifles, especially in terms of their cost and reliability. It is reported that for the first time the new AK-400 will be presented to the general public at the Army-2016 forum, which will be held in the Moscow region in September of the 2016 year.

Apparently, the AK-400 can become the basis for a new ultra-light machine gun (RPK-400), which today also has a demand from the military. It is reported that the Kalashnikov concern has already offered the security services an ultra-light machine gun, built on the basis of the AK-400 assault rifle. The new compact machine gun, comparable in size to the AK-74, but superior to Pecheneg in service in terms of accuracy and rate of fire, the Ministry of Defense plans to order for weapons the special forces, reconnaissance, mountain riflemen, special forces fighters. With the new small-sized and light weapons, the listed categories of soldiers will be able to more successfully accomplish the tasks assigned to them.

In particular, the military expects to receive machine guns for different 7,62 and 5,45 cartridge mm and with different barrel lengths. So 5,45-mm machine gun is more suitable for action in populated areas and on the plain, and 7,62-mm for fighting in forest and mountainous areas. At the same time, a machine gun with a long barrel can be used for hitting targets at long distances, and a short barrel will look better during assault actions. Also, at the request of the Russian Ministry of Defense, the novelty will have to get a tactical handle in front of the machine gun, which will allow for more accurate fire even on weight, without the focus of the machine gun on the bipod and telescopic butt. 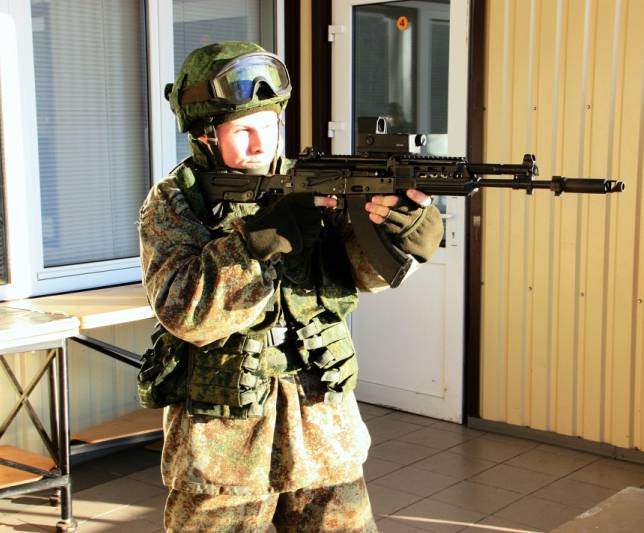