"Battle of 1000 swords" in Kolomenskoye


A few days ago, in the architectural museum-reserve "Kolomenskoye" (Moscow), a unique military-scale festival was heldhistorical reconstruction "Ancient Russia. The battle of 1000 swords. " Such events within the framework of the project “Times and Epochs” have been held for several years in a row, and this year the festival’s storyline was dedicated to the period of Kievan Rus, i.e. reconstruction of the armament and equipment of the soldiers of the Old Russian lands and their neighbors in the era - the Vikings, nomads, Byzantium, etc. In total, this event lasted several days, but were open for public access on June 11 and 12. 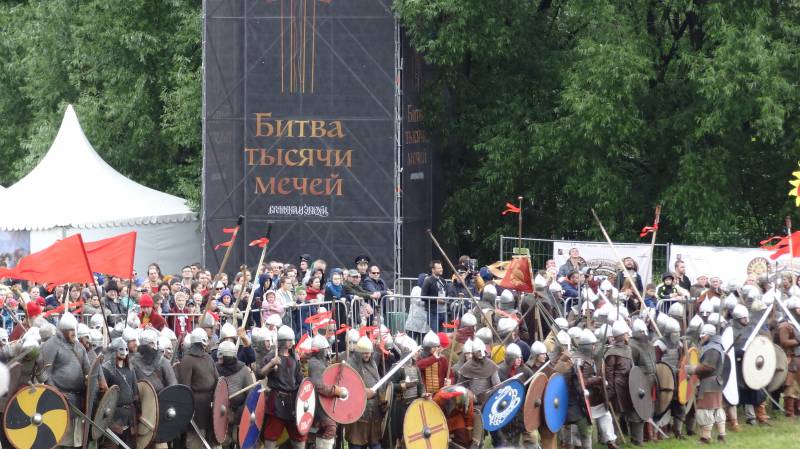 The territory of the museum park was divided into several sectors, in each of which were presented the life and crafts of a certain people, as well as the types of warriors characteristic of them. 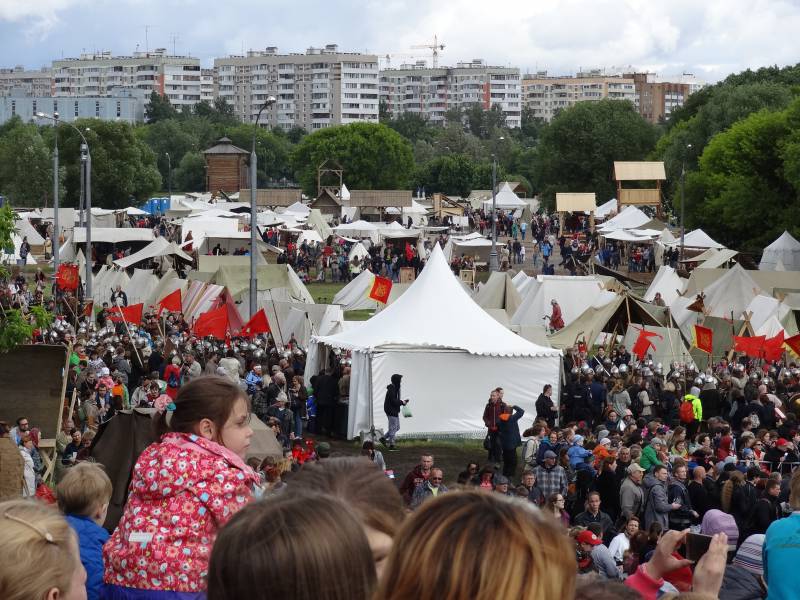 In the center of the park, creating a reciprocal relationship, was located "Torzyshche" - a fun fair, where the ancient Rus, Scandinavian, Byzantine and Oriental merchants offered the festival guests a variety of goods (though such detail as the slave market with naked slaves, it was decided ). 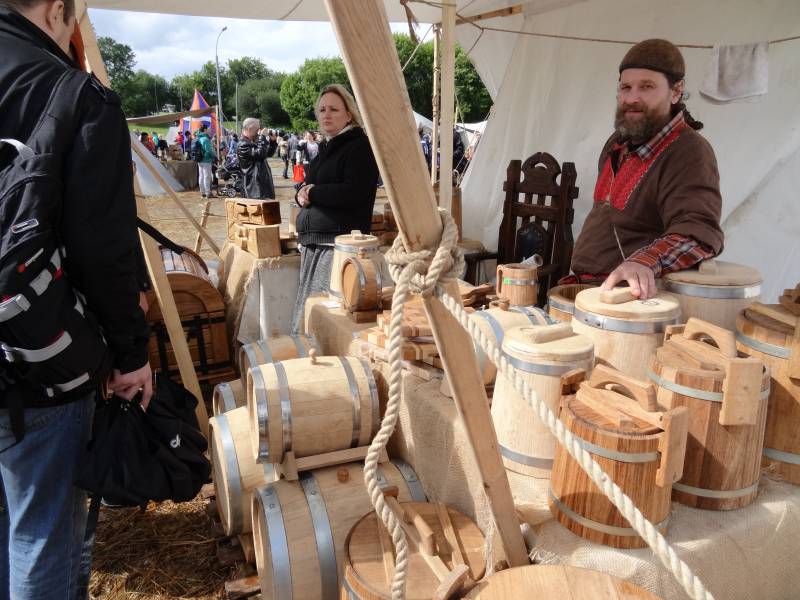 Between the battlefield and "Torzhishche" there was the "Varyazhsky Borg" - a battle camp of fierce Viking mercenaries, who retained faith in their ancient gods, and decided to offer their services as warriors to the Russian prince. 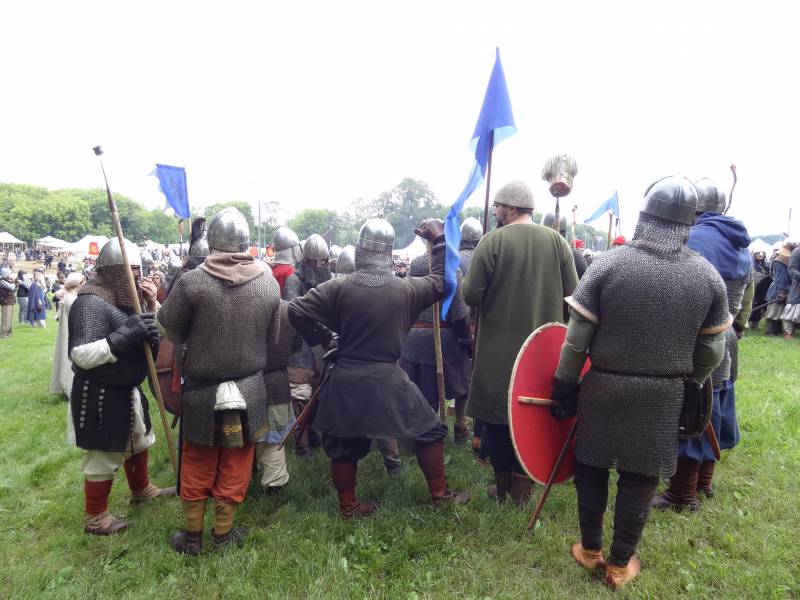 To the left is the Steppe's Tabor, where one could see the life of the dashing inhabitants of the Wild Field and the southern Old Russian frontiers, who came this time for peaceful trade. 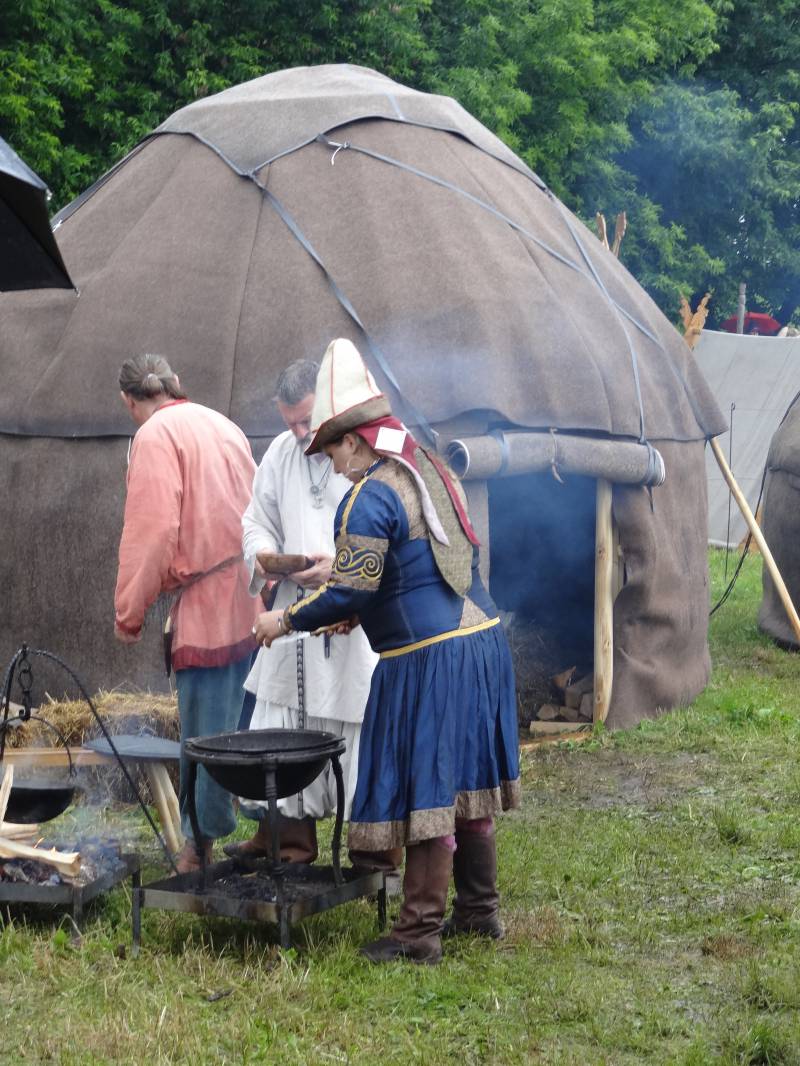 Nearby was the "Byzantine Embassy" - the camp of the imperial aristocrats and their soldiers who arrived at the negotiations to the Russian prince.

On the other side of the “Torzhischa” was the “Camp of the Balts and the Finno-Ugrians”, in which one could see their ancient temples, as well as, for example, amber and bone carvers. 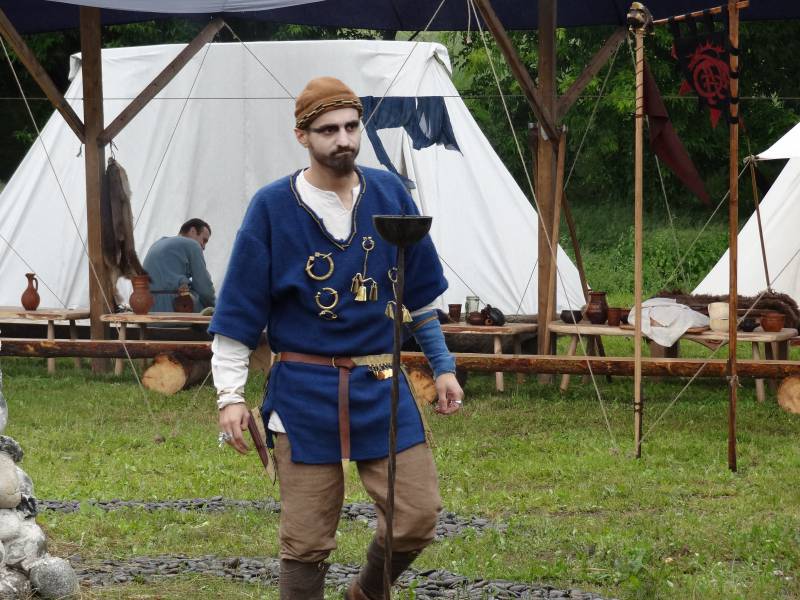 A short distance away there was a huge “Prince's camp” - the main camp of the Russian prince’s warriors, where one could see a huge variety of foot and horse soldiers of the period of Kievan Rus. 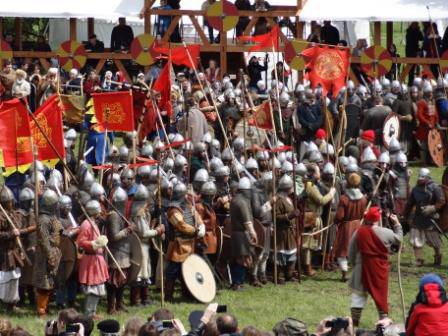 It was joined by the camp of the Vikings and other European mercenaries in the service of the Russian prince and those who professed the Christian faith - "Gardarika".

Nearby was the "Norman camp" - the camp of the soldiers of the Duke William the Conqueror, who arrived for talks in Russia from faraway France.

Well, on the other side, “Posad” adjoined “Torzhishchu”, which included the reconstruction of a medieval artisan suburb and Finno-Ugric and Slavic rural settlements. 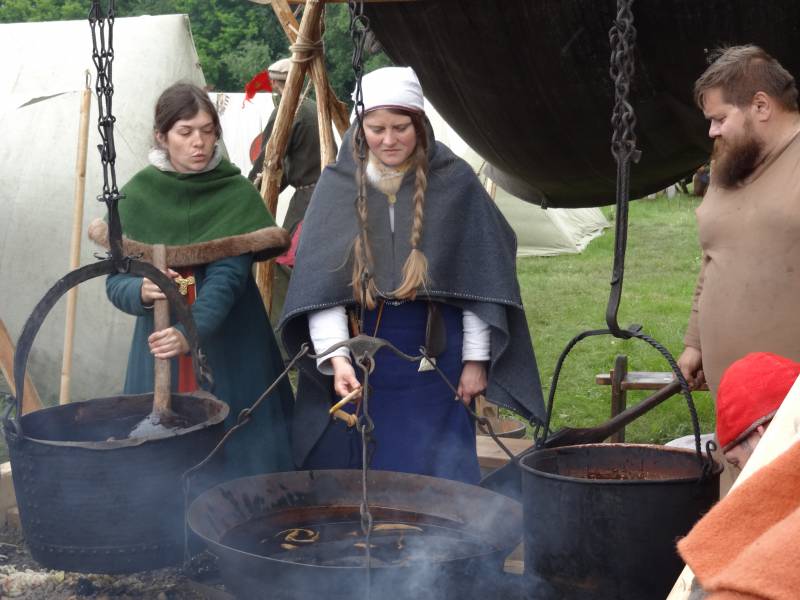 On the Moskva River one could see the Old Russian pier with the boats of the Slavs and Vikings, who suddenly, without sharing something, could turn from peaceful shipbuilders-merchants into formidable warriors, and fight each other. 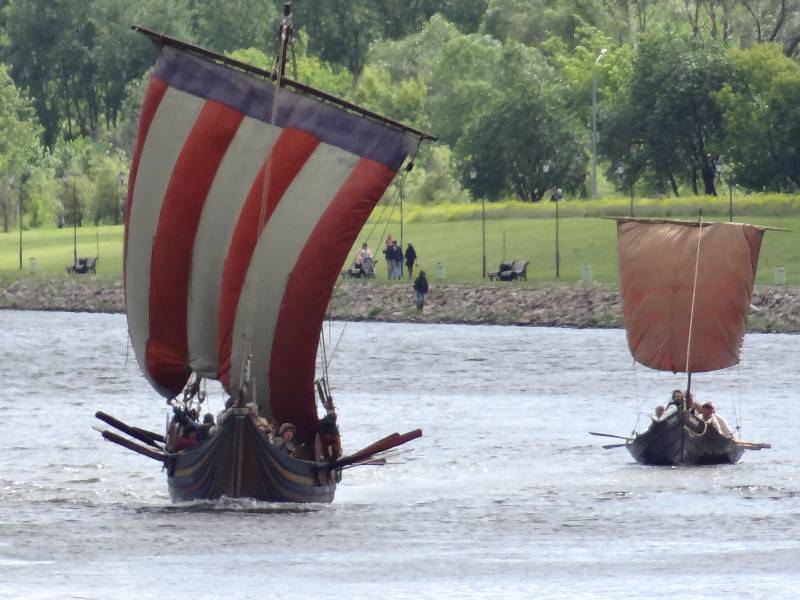 The main area of ​​the entire festival, of course, was the Battlefield, where horse races were made for several days and huge ratifications of ancient warriors converged in shining armor. 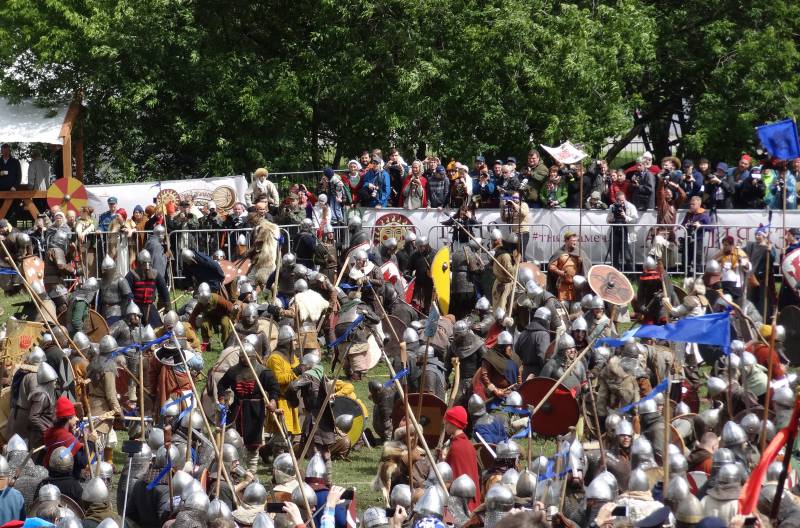 It was surprising to see a variety of horse warriors - both Rusich and steppe men, who participated in equestrian expeditions and amazed the audience with their martial art. For example, on each day, the game was “goat-raising” (when riders of different teams have to throw a goat carcass at the gates of the enemy, while participants are allowed to actively use whips against each other), a very ancient tradition that still lives among the nomadic peoples of Central Asia . 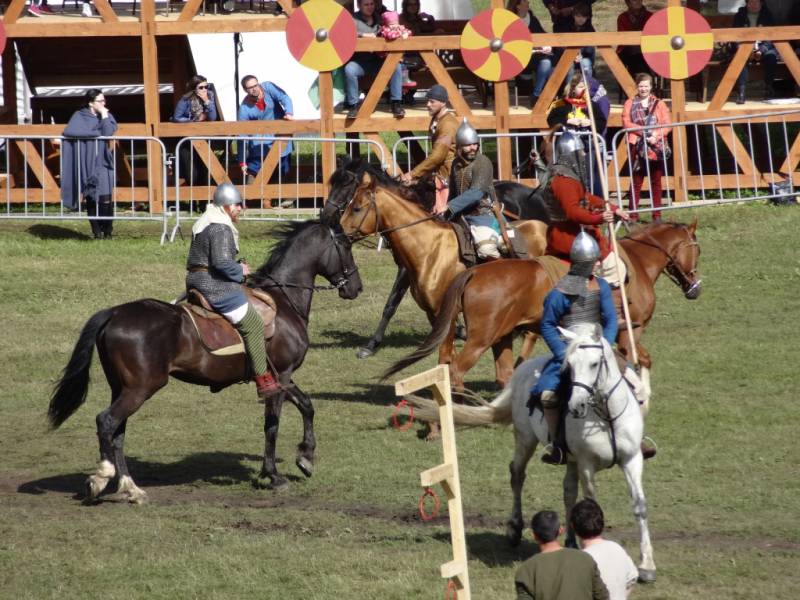 For those who are tired, it was possible to refresh themselves with kvass, mead and beer, brewed according to traditional recipes (of course, at Moscow prices), or to reinforce strength with delicacies of deer meat, wild boar meat and bear meat. Old Russian recipe, bread! 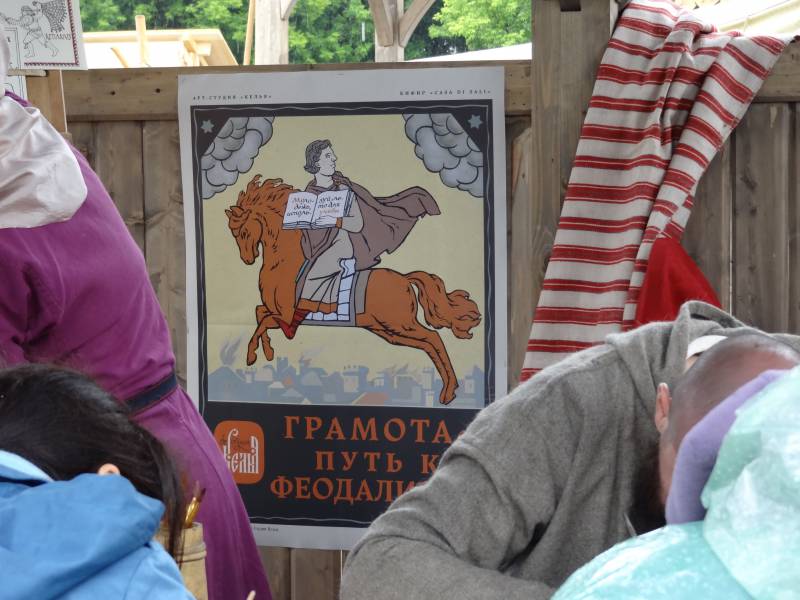 Perhaps the best event for those who love their country, appreciates our history, and especially for younger youths, is simply difficult to find. One such festival, with a complete immersion in the era of Ancient Russia, replaces dozens of school history lessons and provides excellent examples for military-patriotic education!