18 2016 June
3
The military fame of Ivan Baryshpoltsa became a prologue to his work, about which very little is known today


Reproaching the memory of Lavrentiy Pavlovich Beria condemned many of the comrades of the legendary Commissar to oblivion. However, popular rumor surprisingly preserved some names. One of the Moscow suburbs is still called Baryshpolk - in honor of the first commander of the anti-missile defense forces of the Moscow Air Defense District.

One of the most secret after the war generals of the Soviet army, curator from the Third Main Directorate of the USSR Council of Ministers of the construction and commissioning of facilities and weapons of the first in the world Unified system of aerospace (anti-aircraft and anti-missile) defense of Moscow, guard lieutenant general of artillery Ivan Baryshpolets was born on June 22 of 1916 in the village of Pechenegi, Kharkiv region, in the family of a blacksmith worker.

From the very first hours, Ivan Baryshpolets participated in the Great Patriotic War as the commander of an anti-aircraft battery. In heavy battles near Moscow in the autumn and winter of 1941, he began to use the entrusted artillery to fire not only at planes, but also at tanks enemy than became famous on the entire Western Front. But the military glory, which would be more than enough for any other participant of the Great Patriotic War, became only a prologue to the activity that it inscribed in history country name Baryshpoltsa.

Immediately after the war and until the last days of his life, he carried out the most serious state assignment - on behalf of the USSR Council of Ministers personally supervised the creation and commissioning of facilities, weapons and troops of the unified Moscow defense system against air and rocket-space attack.

First, under his direct supervision, carried out from the Third Main Directorate of the USSR Council of Ministers, the first part of the Soviet air-defense system was created, namely, the Moscow air defense system (C-25 “Berkut”). Its main developers were the first head and chief designer of the special design bureau SB-1 (KB-1), doctor of technical sciences Pavel Kuksenko and his former student Sergo Beria (chief designer of the C-25 system).

Then, by decree of the Council of Ministers of the USSR from 17 August 1956, work began on creating a second, more complex project queue, namely, Moscow’s ABM system (A-35), the main developer of which was NIIRP’s general designer, who as Alexander Raspletin, one of the department heads of the SB-1 (KB-1), along with him also actively participated in the creation of C-25, and then C-75. 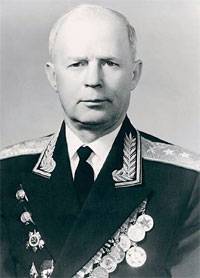 Ivan Baryshpolets, appointed by the same decision of the Council of Ministers of the USSR as the curator of this project, successfully accomplished this, as it turned out, the main task of his whole life. In a post that was initially called the head of missile defense (and essentially being the first commander of a missile defense), he directly managed all the processes of organizing training officers in high schools and academies of the Air Defense Forces of the country, as well as combat training and operational use formed in our country for 20 years. PRO connections.

The years of the Great Patriotic and intensive post-war service in the conditions of the strictest secrecy with the highest responsibility for the fulfillment of the tasks assigned to the state importance were not easy. In his 60 Baryshpolets was still full of energy and rushed into battle to make full use of the accumulated rich experience of organizing the joint use of missile and air defense forces, but, unfortunately, did not have time. He died suddenly from a broken heart 10 December 1976 of the year.

All those who have served under the command of Ivan Yefimovich Baryshpolts are sure that it would be expedient to organize the holding of events dedicated to the centenary of his birth, namely the command of the videocamera. This is also necessary because the experience of construction of facilities, creation of air defense systems and missile defense systems in Moscow, the organization of their joint use as part of the EU EKR is acquiring special relevance today. Let us hope that the experience of General Baryshpolts will be in demand and will help us in developing a rational organization of strategic actions to ensure Russia's military security in the aerospace sphere.

The majority of those who, together with Ivan Efimovich, worked on the creation of a rocket “umbrella” over the USSR, are no longer alive, and today the preservation of their memory, the enhancement of their success, depend entirely on us, primarily on those who are now working on developing the system. IN TO. The Baryshpolts, the designers and the military who worked with him were indeed the first and, unfortunately, their fates often took shape, like those of intelligence officers: to serve the Motherland, not sparing lives, and even remain unknown after posterity for posterity after death, but for someone and forever.

Among the effective managers in the military field, there are enough gentlemen who feel themselves, who, without thinking, “reform” everything that previous generations of developers, military personnel and organizers of the missile shield built. Therefore, today the main goal is not only to return the memory of the unjustifiably forgotten ancestors and founders of the country's aerospace defense system, but also to study their most valuable experience, to make the most of it to improve the modern system of military security in aerospace and joint strategic actions to fight against any enemy.

Ctrl Enter
Noticed oshЫbku Highlight text and press. Ctrl + Enter
We are
Sons of ivanBeria is the protagonist of the USSR atomic project
Military Reviewin Yandex News
Military Reviewin Google News
3 comments
Information
Dear reader, to leave comments on the publication, you must sign in.