"Pass in captivity" for the Nazis 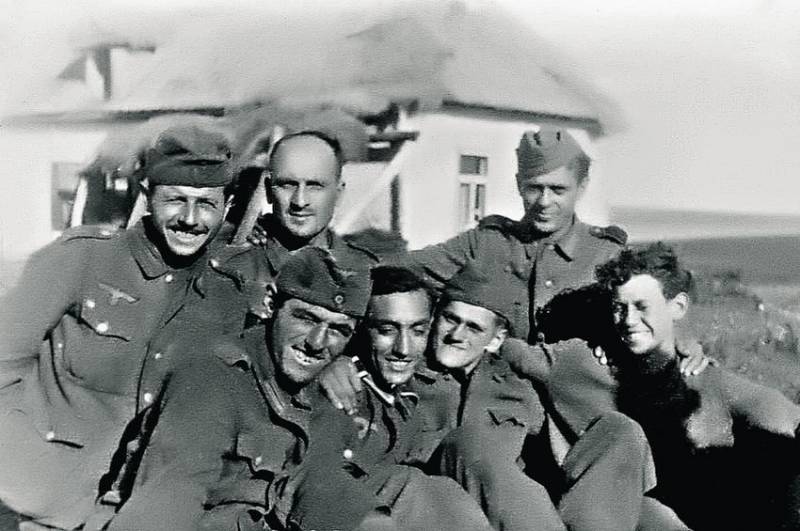 Unusual gift to the orphanage

Senior Researcher, Military Historical Museum of Artillery, Engineering and Signal Corps, retired colonel, candidate historical Sciences, Professor V.A. Chernukhin donated a Soviet leaflet in German for soldiers of the German army to the Prokhorovka Orphanage for Girls in 2014. The history of this document turned out to be unusual.

The translation of the leaflet made it possible to establish that it was released by Soviet propaganda bodies at the time of the tank battle at Prokhorovka in July 1943. The document cited statistical information on 21 month of war: from June 1941 to February 1943.

The leaflet called on German soldiers to think about the defeats of the Hitler army: from the 21 months of war, the Germans attacked only 8 months, and defensive battles retreated during the 13 months. During this time, as stated in the document, the Germans lost the order of 9 million people killed, wounded and captured.

The document is written in a dry language of numbers and convinces with the logic of presentation and facts that should lead the German soldier to the inevitable conclusion: the Hitler army became weaker and afraid to be surrounded, the attempts of attack are doomed, and surrender in this situation is the only salvation for the German soldier.

The story told by the photograph

During World War II, the leaflet served as a kind of “pass into captivity” for a fighter. Soviet propaganda agencies printed them for the Germans from the first days of the war. But then the effectiveness of the leaflets was extremely small. German soldiers were hostile. Let us give a fragment of a letter to the wife of Chief Corporal Willie Klepper from February 3 1943: "But woe to us if we fail to crown our banners with victory! But no, it must be so, because it cannot be that Bolshevik Russia began to manage such a beautiful state like our beautiful Germany. About one thought about this, blood boils in our veins. It just shouldn't be like that, no matter what happens, we should have a lot of other weapons in order to kill the Russians ... "1

But after the defeats of the Germans at Stalingrad, "passes to captivity" earned. Including in the tank battle near Prokhorovka. So, in the report of the acting Head of Counterintelligence Department SMERSH 5th Guards tank army of Colonel Frolov and the head of the 4th department of counterintelligence SMERSH captain Poyarkov dated July 17, 1943 N 962 read: "July 14 this year during the fighting ... near the village of Big Podyarugi voluntarily surrendered to our troops the separation of German soldiers of the 6th mechanized regiment of the 7th Panzer Division as a part of non-commissioned officer Heinz Scharf, German born, Corporal Pavel Zumpel, born in 1917, German, Corporal Oscar Poodle, born in 1921, Pole, private Edmund Leszik , Born in 1913, Private Kurnovsky Thief, born in 1921, Pole, Corporal Johann Karl, born in 1924, German, and private Jan Frinkel, born in 1909, Pole "1916. Total 2 people. Upon surrender, they presented the Red Army with a Soviet leaflet.

What was the emotional state of the surrendered German soldiers, allows you to judge the photo taken on July 14 1943, against the background of the house in the village of Skorovka, which housed the headquarters of the 5 Guards Tank Army.

This town is located about 30 km from the place of delivery - the village of Big Podyarugi. The author of the photo is the head of the organizational department of the political department of the 5 Guards Tank Army D.I. Kochetkov, and the name of the picture - "A group of German soldiers who went over to the side of the Red Army during the fighting in the area of ​​the station Prokhorovka." They are also 7 people. Judging by the photos, the captured German soldiers are happy and smiling.

"Who will return alive to their homeland, he will be happy"

What were the circumstances of the surrender of the squad of German soldiers? In the article "Side impact" N.I. Ovcharova writes: "The battle near Prokhorovka ... was characterized by exceptionally great intensity and variety of forms of hostilities. Offensive and oncoming battles were fought in some directions, defense and offensive in others. The success of 12 July consisted of many components. It certainly ... coordinated fighting not only on the main line, but also on the auxiliary "3. One of them was an auxiliary strike of the enemy in the general direction to Korocha. In order to eliminate the serious threat to the left flank and the rear of the army, the army commander ordered Major General K. G. Trufanova combine parts of the 92-th and 37-th infantry divisions, as well as its reserve for the destruction of enemy forces. A detachment under the command of General Trufanov was sent to the area of ​​the village of Bolshie Podyugi, including the 1 Guards Motorcycle Regiment, 53 Guards Tank, 689 Anti-Tank Artillery Regiment and the 678 Battery of the Howitzer Regiment. Throughout the day, 12 July squad led intense battles, and the enemy threw fresh reserves. In the area of ​​Bolshie Podyagiu started a fierce tank battle. According to an opsvod from 12 on July 1943 of the year on 19.00, the detachment of Major-General KG Trufanova took up defensive positions in the area of ​​Bolshie Pododyug and conducted reconnaissance to the south. In this direction the fate of the Prokhorov tank battle was decided, and the heroism of the Soviet soldiers was massive. After defeating 12 July on the direction of the main attack, the Hitlerite command set the task for the entourage of five divisions of the 69 Army defending in the ledge between the Lipovy and Seversky Donets rivers. 13-14 July the center of the final stage of the Prokhorovsky battle shifted to the area Watchtower - Vinogradovka - Ivanovka - Big Podyarygi. The enemy forces 19 th Panzer, 107 th Infantry Divisions and the approached SS Panzer Division captured the nearby villages. However, General Trufanov did not allow the enemy to break through to the Shakhovo line. On this day, the squad destroyed 20 German tanks and, before 100, soldiers and officers, he himself lost 14 T-34 tanks. 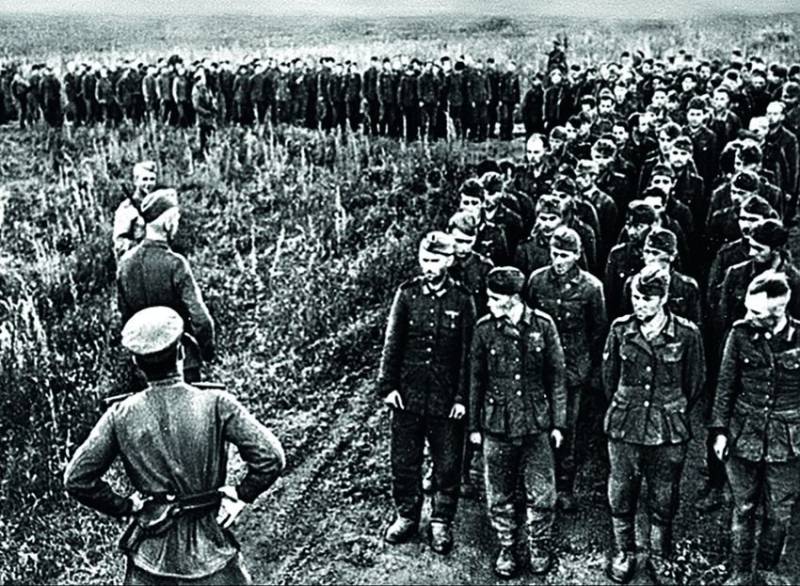 German soldiers and officers taken prisoner in the Battle of Kursk. / Motherland
In such a tense battle situation and the surrender of the detachment of German soldiers took place. In the report we read: "The 6 th meteorological regiment of the 7 th tank division of the German division was in the defense of the village of Bol. Podjarugi. The detachment commanded by non-commissioned officer Heinz Scharf was in the trenches of the second line. When the Germans ... began to retreat, Private Jan Finkelman offered not to retreat, but to surrender to the Russians. The squad commander, non-commissioned officer Heinz Scharf supported him, no one from the squad started to retreat, although they had the opportunity to retreat, but continued to be in the trench. With the approach of the Red Army to the trench Heinz Scharf presented the Soviet leaflet y, and the soldiers surrendered to the whole detachment "4.

During the 16 July interrogation, Heinz Scharf explained his surrender as follows: "Seeing that Germany is waging a war hopelessly and given Goering’s statement that whoever returns home alive, he will be happy, I had the intention to go to the Russians and kept the Soviet leaflet to surrender in captivity. 14 on July of this year such an opportunity presented itself, and I, along with my squad, surrendered to captivity "5. Corporal Oscar Poodle also confirmed that he remained in the trenches in order to surrender as he was tired of fighting. 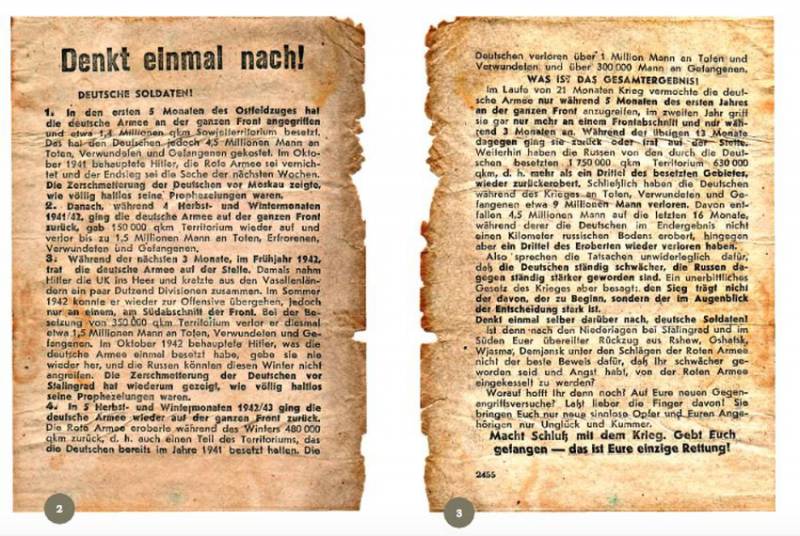 It looked like a leaflet, calling on the Wehrmacht soldiers to surrender. / Motherland
Think about it!

1. In the first 5 months of the eastern military campaign, the German army advanced along the entire front and occupied about 1,4 million km2 of Soviet territory. But it cost the Germans 4,5 a million people killed, wounded and captured. In October 1941 of the year, Hitler argued, the Red Army must be destroyed and complete victory is the business of the next weeks. However, the defeat of the Germans near Moscow showed how groundless his prophecies were.

2. Then from November 1941 to February 1942, the German army retreated along the entire front, losing 150 000 km [2] to the previously occupied territory and to 1,5 a million people killed, frozen, wounded and captured.

3. For the next three months, 1942, the German army trampled on the spot. Then Hitler scraped a couple of dozen divisions out of the population of the occupied countries. And in the summer of 1942, he was able to go on the offensive again, but only on one southern segment of the front. Having occupied 350 000 km2 territory, at the same time he lost about 1,5 million soldiers killed, wounded and captured. In October, 1942, Hitler argued that the German army would never lose anything, would not give anything back, and the Russians would not be able to advance in the coming winter. However, the defeat of the Germans at Stalingrad again showed how groundless his predictions were.

4. At the end of 1942 - the beginning of 1943, the German army again retreated along the entire front. In winter, the Red Army won over 480 km2 territory, this is part of the territory that the Germans occupied in 1941 year. The Germans lost over 1 a million people killed and wounded and more than 300 000 surrendered.

5. During the 21 month of war, the German army was able to advance only during the 5 months in the first year, on the whole front it attacked only on one front segment during the 3 months. While 13 months she retreated or remained in place. Then the Russians won over 1 750 000 km2 territory, 630 000 km2 of which were occupied by the Germans, it is more than one third. As a result, during the war, the Germans lost about 9 million people killed, wounded and captured, of which 4,5 million fell on the last 16 months of war, during which the Germans did not capture a single kilometer of Russian land, on the contrary, a third of the captured lost again.

So, the facts irrefutably say that the Germans are constantly weaker, the Russians, on the contrary, are constantly becoming stronger. The ruthless law of war says: it is not the one who starts the war who wins, but the one who is able to make decisions instantly.

German soldiers, think about it yourself!

Unless defeat near Stalingrad and in the south, your withdrawal from Rzhev, Gzhatsk, Vyazma, Demyansk under the blows of the Red Army is not the best proof that you have become weaker and afraid to be surrounded by the Red Army?

What are you still hoping for? On your new assault attempts? Better leave it. You will incur new senseless losses and make your relatives miserable.

Make a conclusion about the war. Surrender is your only salvation!

Ctrl Enter
Noticed oshЫbku Highlight text and press. Ctrl + Enter
We are
22 June. Brest Fortress. Battle ReconstructionDiplomats of the People's Commissariat of Defense: on the eve and during the war
Military Reviewin Yandex News
Military Reviewin Google News
17 comments
Information
Dear reader, to leave comments on the publication, you must sign in.