When the continents were big. Bandeirante 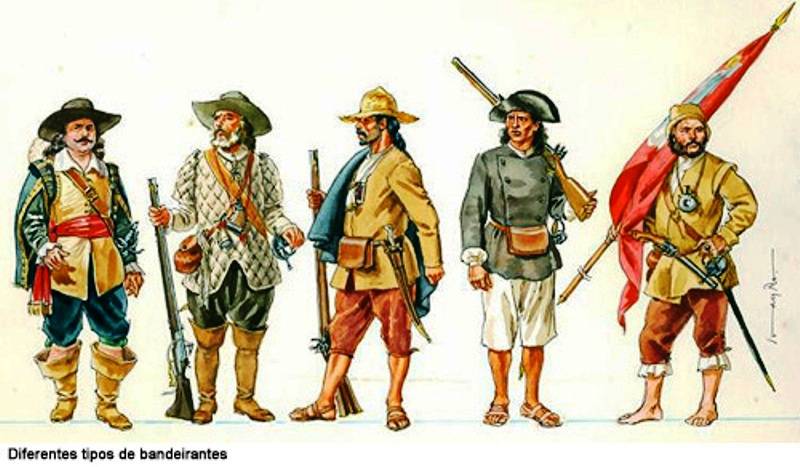 How are boundaries between states established? Weird question! We are used to looking at the political map of the world and seeing a jumble of colored patches. So it happened, yes, there were wars, invasions, the collapse of empires and the liberation of the colonies. We can easily understand the boundaries of today's Britain or Spain.

With the New World, everything is a bit more interesting. As we all know, there was a period when it was all colonies. English, Spanish, French, Dutch. We know best история United States of America. She can even be said to have “forced on her teeth.” To the south of Rio Grande - there were mainly located the Spanish colonies, the fate of which is also quite well known.

The French began brightly, but were later ousted, and only a memory of them remained in the form of French-speaking Quebec in Canada. Other European nations left behind even less.

Brazil. Brazil is not a Spanish-speaking country. This country was founded by the Portuguese. Yes, that's right - the largest country in Latin America was founded by immigrants from small Portugal. Today, by the population of 200 million and by the territory of 8,5 million square kilometers, it ranks fifth in the world. And they all speak Portuguese. For comparison, the US has about 325 million population and 9,5 million square kilometers. 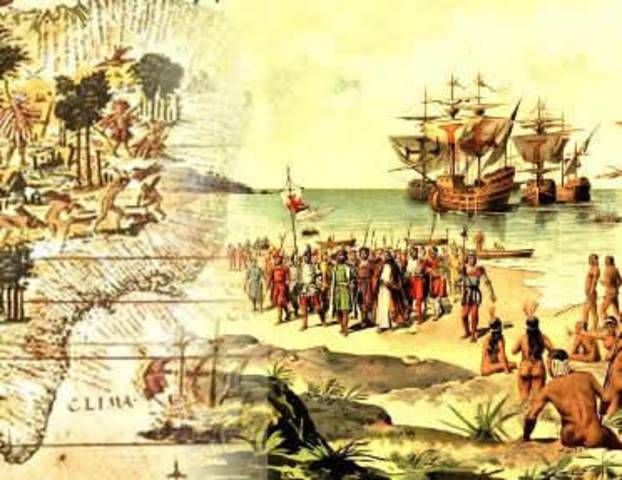 This is not Christopher Columbus

So, the country is big, one can say, leaving Russia aside, gigantic. Let's look at the map of South America: the descendants of Magellan grabbed a lot of themselves. Lots of. The next natural question is that we are all a bit Ukrainians: “How did they manage to do this?” The land is the product that “is no longer produced”. If someone decides to found a new power today, he will be completely disappointed: this is simply nowhere to do. Alas, the Germans encountered this at the end of the 19 century: the entire power of the Second Reich was absolutely not enough for full-scale imperial construction.

We know what happened next: two world wars and modern Germany, which is comparable in size to my native Sverdlovsk region (a bit more). I would like to ask this very question: who contributed to the creation of such a large state?

Bandeyranchis. In Portuguese, the original is bandeirantes (standard-bearers). It is said this way, in the Russian version I met the “banderants”. We will not reinvent the wheel and breed terms - so are bandeirants. Accordingly, their expeditions were called “bandeirs” (banners). I agree, in the light of recent political events sounds quite funny.

So who were these, these same bandeerants? The simplest and most understandable analogy, but, of course, only an analogy, for the Russian people - this is the expedition of Ermak and others like him. First of all, it should be noted - they were not financed by the state. The state was not interested, or something like that. Ahead lay a huge, virginal continent full of treasures and mysteries, but the planters from the coast were not very interested. Namely, they controlled political processes.

In the Spanish colonies, the sentiments were about the same - to seize and export to Europe what is badly lying near the coast. That, in principle, from an economic point of view is quite logical and justified. Transportation by land before the advent of railways is expensive, it is very, very expensive. It is not surprising that the vast continent of South America was developing very slowly. Yes, of course, there were expeditions in search of El Dorado. This is a separate big interesting topic.

But in general, the dense tropical forests and plateaus in the center of the continent did not attract the masses of people willing to settle there. It is impossible to compare with North America - there the climate is different, more suitable for the white man. About Brazil, the Brazilians have the following expression: “A person is happy in a selva for two days - the first when he enters and is fascinated by her beauty, and the last - when he breaks out of this green hell”.

In general, the task facing the Portuguese “explorers” was not simpler, but perhaps even more difficult than before explorers from Moscow Russia (a white man does not live in such a climate for a long time, a sea of ​​diseases or may just start to rot alive from a small injury). But what attracted them to this murderous green hell? Yasak local people they were not going to obkladyvat. Brazilian furs are so-so.

The following is a map of the expedition. The blue arrows mean expeditions in order to capture the Indians in captivity. Yes, the Brazilians imported the ancestors of the slave Izaura from Africa, but they did not disdain the local labor force either. Although it seems to be one Negro was worth as ten Indians.

Dark Brown are expeditions in search of mineral resources. Brazil is very rich in these very resources. In this case, looking for gold and silver. And they found that characteristic.

Light brown - well, this is for the sake of searching for new souls that can be turned into Catholicism (the same Indians, paradoxical as it may be!) 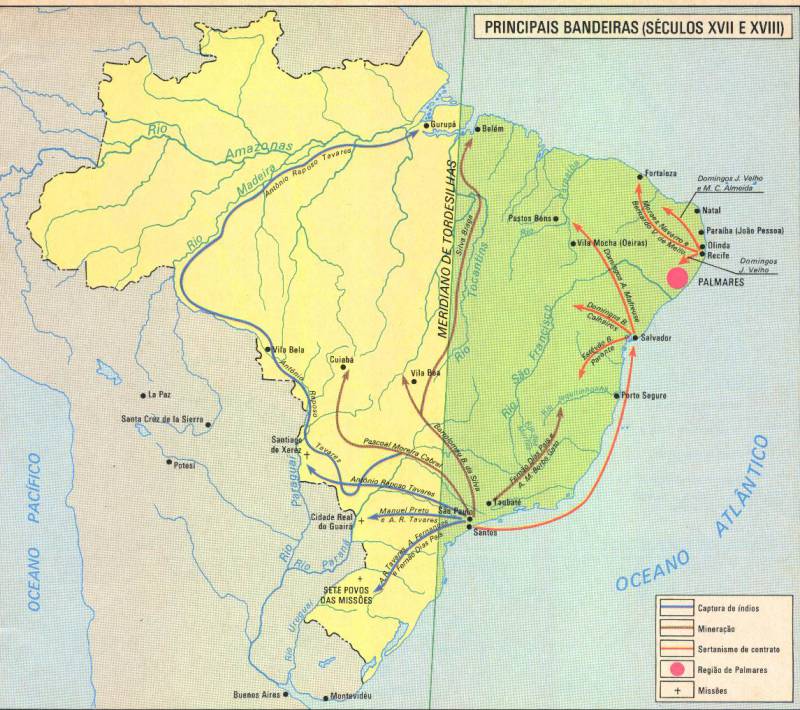 The picture, I hope, is clear. These very Banderantes were certainly not holy, by no means. I must say, the Spanish colonists frankly hated them and considered bandits, in many ways, by the way, fair. There were constant and numerous collisions. By the way, more than half of the territory of modern Brazil (the light yellow part) is behind the Tordesillas meridian ... The descendants of Pizarro and Cortes silently wipe away the tears. 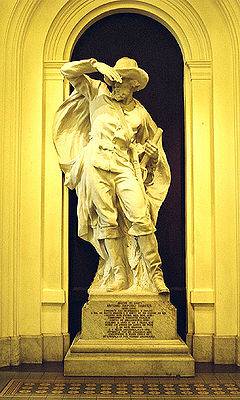 This statue is designed to depict one of the most famous bandeirant, namely António Raposa Tavares or Tavaris (Brazilian pronunciation). See the long, long blue arrow along Madeira and the Amazon? This is it, Tovaris or Tavares (Portuguese version).

But be that as it may, this is the very Bandeira that made Brazil Brazil. As a result of this (the longest) expedition, Portugal laid claim to a gigantic territory in the Amazon basin.

Such here they are, the Portuguese, then Vasco da Gama, then Magellan, then Tovarish. Further, a monument to Bandeirant in the capital of Brazil - Brasilia.

And so, of course, the issue of “new lands” is very interesting: the great France at various times actively mastered the New World, now the north-west of Africa ... But in fact there is little left of this empire: the vast territories on the African continent speak the language Maupassant, however, to the culture and history of France have the most remote relation. But the starting positions of France were simply magnificent: the first in Europe is a truly absolutist, centralized state. Louis XIV, Colbert, powerful fleet, powerful state. And what are the results? And they are not on the map. Virtually nothing was left of the Dutch empire, but at the time of its heyday, in the 17 century, it was the greatest maritime power.

Australia, Canada, USA and New Zealand - everyone knows that. The Spaniards (the superpower of the late Middle Ages) successfully mastered almost the whole of Latin America (before the US-Mexico war, their achievements were even clearer). So, historically, the Spaniards did take revenge on their French enemies: from Rio Grande in the north to Tierra del Fuego in the south, all Latin America speaks mostly Spanish (understandably, with the exception of Brazil).

For reference, the Spanish and Portuguese languages ​​are quite close, the vocabulary is very similar, but it is rather difficult for them to understand each other without an interpreter. Spanish (Castilian) from Spain serves as the standard for the majority of the Spanish-speaking public (South American countries have an accent, but the language is generally the same). We have about the same with the English USA / Britain and even with the French in Quebec. In Brazil, the pronunciation differs from the original Portuguese very, very significantly. And foreigners are taught either one or the other: understanding one does not guarantee understanding of the other. Such is the fun feature. By the way, due to common linguistic roots, a person who speaks Spanish can, in principle, read the text in Portuguese and vice versa and understand seventy percent. But Brazilians and Argentines on the street do not understand each other at all.

It can also be noted that Brazil is the absolute economic leader in Latin America. Hispanic countries lag far behind. And the ratio of the standard of living in the former colonies and the metropolis of Spain is currently forming in favor of the latter, the standard of living in Brazil is much higher than in the “mother” Portugal. Such is the hitch. In my opinion, one of the reasons: Brazil is a large country, with rich natural resources and a significant domestic market. Hispanic countries are highly fragmented and cannot boast of such proportions. Yes, there is Mexico, but this is more of a “backyard” of the United States. Which competitors are not needed.

So the activity of the bandendants had very serious geopolitical consequences. The foundations were laid for a potentially powerful power in Latin America. By the way, we do not write much about it, but the constant “unrest” that has been rolling around Brazil in recent years is explained by just this. While Brazil was a typical Latin American colony of international monopolies (to Lula for sure), nothing of the kind on such a scale was going on there, although the people lived an order of magnitude worse (a colonial tax!). The country began to grow rich, and then endless mass unrest suddenly began, why would it?

Well, it’s also impossible not to mention the racial composition of Brazil, it’s generally interesting to see, for example, football teams from Latin America: if Mexico or Peru is a mixture of Europeans and Indians (in some proportion), and Argentines are practically Europeans, then Brazilians - This is a very wild "mix", the main components of which are: Europeans and Blacks. Just look on the Internet for pictures / videos from there. Brazilians, they seem to have little resemblance and are quite unique. Peculiar such type.

And this large, interesting and unique country has arisen largely due to the fact that those same Banderans hurried themselves in time. The right people in the right place at the right time. 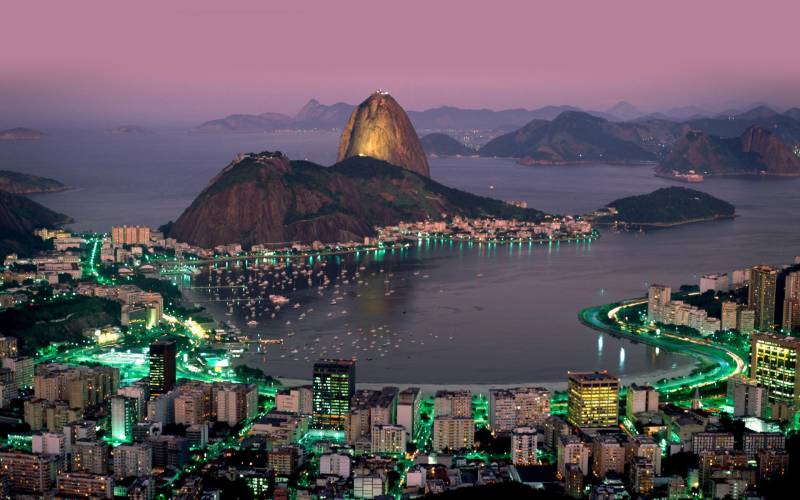