Football as a new campaign to demonize Russia

16 2016 June
206
Due to the football "sickness" with a certain experience these days, you come to the conclusion that a considerable number of media outlets and representatives of the bureaucracy (Russian and European) to millions of Russian fans simply do not allow to enjoy the sports festival - the European Football Championship. If earlier, to enjoy football sports holidays, our national team and its game often interfered directly, but now there are also new obstacles to the heap ...


They do not, given that not every year - the Championships of the continent, and in addition, not every time the Russian team turns out to be on them. They do not allow us to focus on the ups and downs of football - that is, on what happens directly on the football field, but fairly “fed” with “near-football” - in fact, it has nothing to do with a representative tournament.

Immediately, a few words about “what is this topic doing on“ VO ”?” The fact is that one gets the impression that the “partners” are prepared to put the pig of Russia even where it would seem to be completely out of place. The “partners” themselves invented the term for this and invented the term, calling this a “hybrid war”. This is when guns can be silent, but they say economic, cultural, social, and now, as it turns out, even sporting restrictions. Or when an army of frankly hostile states is “warming up” at the country, and at the same time plans continue to be born in these states about how to tickle the nostrils of the Russian bear so that it shimmers, but it does not bite off half the hands.

From the first days of Euro-2016 on television screens, in newspapers and social networks, much more is not discussed what schemes the game implements this or that team, how many goals are scored, but how the fans whip each other for what called fans, not provocateurs), as someone (from fans, and even football players themselves) vigorously marked the end of the match with alcoholic libations, and then performed the act of emptying the stomach and intestines with a simultaneous breaking of the nose on the pavement when he “met asphalt towards ".

The question is, why and, most importantly, who needs all this? And yet - why 8-9 from 10 reports in the media about hooligan fan tricks concerns the Russians (well, or those who appear with Russian attributes)? It seems that Russia wants to feel guilty, excuse me, even hammer here. Like, Russia, repent! Repent for your fans! They are you, Russia, inadequate ...

Every time - an attempt to take away a sports festival under various pretexts. That dope, the infringement of the rights of homosexuals of all stripes and genres, now a new “trick” - Russian fans in France “do not know how to behave, and all the rest are goodies with white wings.”

Does this media factor need millions of fans who were waiting for the start of the European Championship, just to watch football - in the stadium or in the armchair? Why is a four-year sports event in Europe transformed by certain forces into a performance with signs of horror? Moreover, in most cases, the horror is so far-fetched by media workers that it is even nauseous ... 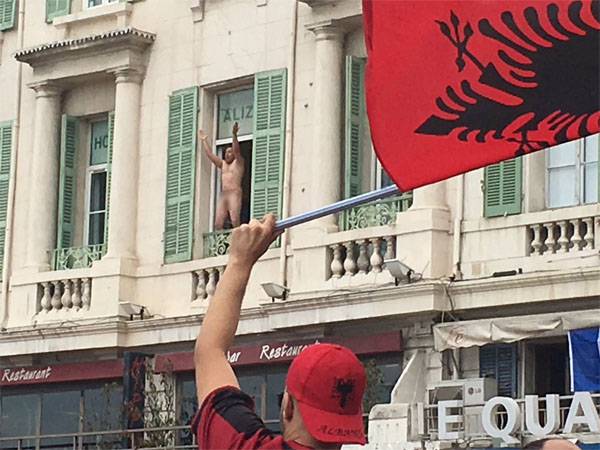 It got to the point that after the clashes in which 5-6 once participated in more English fans than Russian, French sports minister Patrick Kanner frankly stated that he would be pleased with the actual disqualification of the Russian national football team.

From Mr. Kanner's Twitter:
If the stadiums will be incidents involving the Russians, their team will be disqualified. And I am pleased.

There is a thought that the formula of tickling the nostrils of a Russian bear with “partners” has been found: from now on, any provocateur putting on a T-shirt with attributes of the Russian team and a beginner in the stands to arrange a drunken “performance” immediately embodies the idea of ​​Kanner about “the pleasure of disqualification”. Moreover, any provocateur from the camp, as it were, fans of any foreign national team may again try to deduce the Russian fans from themselves, so that UEFA can “get the ball out” of the Russian team. This somehow, apparently, should alleviate the emotional state of the “democratic world”, in which even English drunk to zero fans who smash shop windows are declared “victims of unbalanced Russians” ...

So why and who needs it? Well, first of all, any injection in the address of Russia for “partners” is already a success. We took pictures of fan fights in the stadium and around the stadium in Marseilles, presented footage in which English “fans” were in the blood - and all to the masses, to the masses. Secondly, no one has canceled the desire of "partners" by hook or by crook not only to push Russia to "repentance", but also to try to take away from Russia the World Championship 2018 of the year. Not by hook, as they say, by crook ... What if we succeed, the partners decided, finding a new reason to start a new stage of anti-Russian perturbations.

The fact that the French police, which were mobilized on Euro-2016 in the number of 100 thousands of "bayonets", either fails to fulfill the tasks of building a security system, or even has no instructions to be especially zealous, Western publications keep silent, occasionally allowing materials in the style : the fans have let themselves go so much that these forces are not enough ... 100 thousands are not enough ?! Yes, and together with guest law enforcement officers from other countries. Well, excuse me ... This is what kind of “professionals” do these serve in the French power structures, that for them the fans who have already taken on the chest become the local equivalent of ISIS? .. 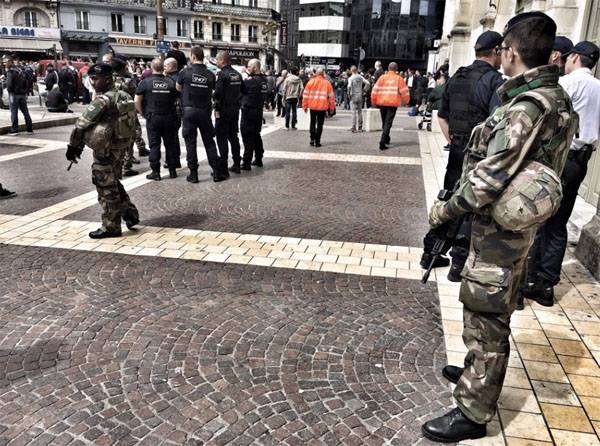 Now that "this has not happened yet", and that "Russian fans are the most inadequate and aggressive."

Fast forward to 10 years ago - FIFA World Cup in Germany. The riots with the participation of Polish and German fans, which began with the fact that the German ultras "greeted" the Poles with a Nazi exclamation. Dozens of broken heads, hundreds of chairs pulled out at the stadium, police beating fans and police fans. In the end - what? In the end, nothing ... Not that disqualification of the Polish or German teams was out of the question, but the penalties turned out to be purely symbolic for these teams ...

Year 2015. Stadium in Kiev. The final 1 / 16 meeting between Dynamo Kyiv and Guingamp (France). Ukrainian fans arrange a fight with the French fans, which develops into riots. The judge decides to stop the match. And then no disqualification, including conditional. Ukrainian football functionaries, without hesitation, announced that the Ukrainian fans "provoked the French flag turned to the side, which was taken for the Russian at the stadium."

And who after that is inadequate? ..

And the English “fans” practically turn every major football tournament into a pretext, excuse me, get angry, and start skirmishes with the police and other teams. And when in Marseille received a response in the teeth, then screamed about human rights and the need for disqualification of the Russian team. 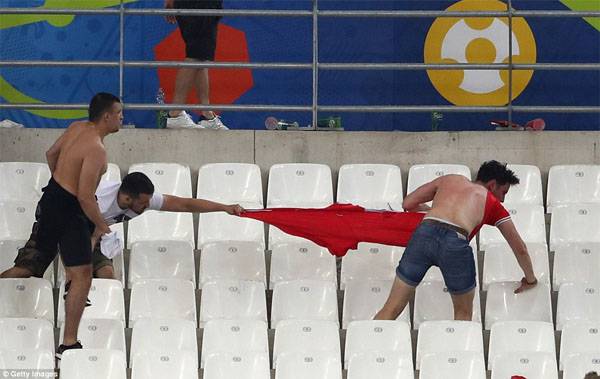 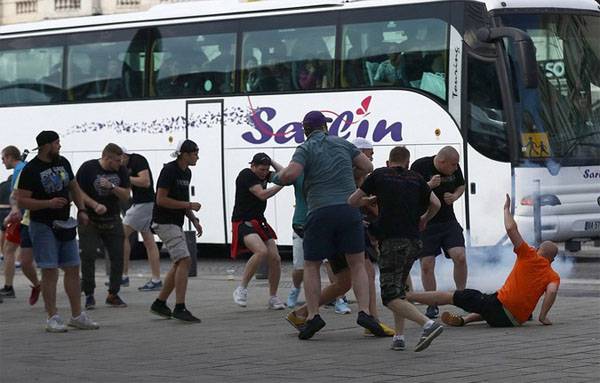 In such a game, the Russian team after the final round in the group, frankly, itself can easily be "disqualified", but the media team clearly needs a "hot" resonance, and therefore when you turn on the TV - news Number one: fan clashes and other okolosportivnaya hype with elements of attempts once again to unleash the "demonic" image of Russia.

No, no one is going to defend the inadequate from the composition of the “fans” of the Russian national team, but I would like to suggest paying close attention to the Russians only to look around carefully or buy glasses with the necessary diopters, just like the OSCE mission in Donbass ...

They turned the sport is not clear what in the background of the unbridled desire to pound ... no, not at all goals - grandmother! ..

Ctrl Enter
Noticed oshЫbku Highlight text and press. Ctrl + Enter
We are
Results of the week. “I have sawdust in my head. Long words only upset me. ”Situational analysis of the death of the MH17 flight (Malaysian Boeing 777), made on the basis of engineering analysis from 15.08.2014
Military Reviewin Yandex News
Military Reviewin Google News
206 comments
Information
Dear reader, to leave comments on the publication, you must sign in.