16 2016 June
85
14 June in the framework of the Paris exhibition of arms and military equipment Eurosatory 2016 an official presentation of the promising infantry fighting vehicle took place. The German company Rheinmetall AG for the first time publicly showed a sample of a new tracked BMP Lynx, which in the foreseeable future could go into mass production and be subject to export contracts.


The Lynx project (“Lynx”) was designed to meet modern requirements for armored vehicles designed to transport troops and support them with fire. Such requirements have determined the main features of the appearance of the new machine, the composition of the power plant, protection and weapon systems. As a result, it is claimed that a new advanced modular family of armored vehicles was created, which can be updated in accordance with the requirements of customers. Also, representatives of the developer company are confident that the new BMP Lynx, thanks to its characteristics, is able to work effectively on the battlefield both now and in the future.

In recent years, the joint efforts of a number of companies from several countries have shaped the overall look of a modern infantry fighting vehicle, actively used in all new projects. The new development of the company Rheinmetall was no exception, and also uses existing developments, and also is based on the basic ideas embodied in previous projects. As a result, the Lynx BMP has a number of features that make it look like some other technique of a similar purpose. 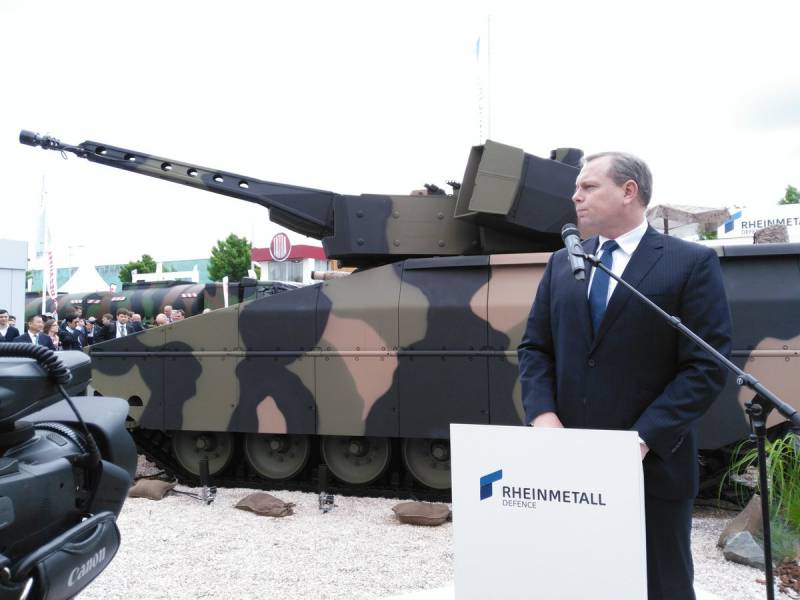 It should be noted that within the framework of the “Lynx” project, two variants of the machine have been developed to date, with some differences. Customers plan to offer BMP versions KF31 and KF41 (Kettenfahrzeug - "Tracked vehicle"). The differences between the two technical options are in the size and volume of the internal compartments. As a result, the first modification vehicle is capable of carrying up to six paratroopers with weaponswhile the larger one holds eight fighters. The Lynx armored version of the KF2016 was introduced at the Eurosatory 31 exhibition. A larger sample can probably be shown in one of the following salons.

The Rheinmetall Lynx project uses the traditional BMP architecture of the machine. The front part of the armored corps is given for placement of the engine and control compartment, the fighting compartment is placed behind them, and the stern for carrying troops is located in the stern. Such a layout of the new machine, like many other samples, is connected with the need to strengthen the crew’s protection, as well as with the optimal placement of the troop compartment.

Protection of a new combat vehicle must be provided by a variety of different means. The corps is proposed to be assembled from armor plates of various thickness, which helps protect the crew and internal units from firing from small arms and small-caliber artillery. In addition, Lynx is equipped with overhead booking modules. In case of defeat, the hull is also equipped with anti-shattering slab, protecting the crew and the landing force. Declared the possibility of using active protection systems of various types. Reservation of the car was created taking into account protection against explosive devices laid on the road, as well as with the use of additional tools that increase the strength of the roof. According to reports, the BMP protection complies with the 5 standard STANAG 4569.

The type of engine is not specified, however there is reason to believe that one of the existing high-performance diesel engines is used. According to the developer, the existing power plant provides a new BMP high mobility and maneuverability. Thus, the Lynx KF31 modification with a combat mass of more than 30 t is capable of climbing slopes of the 60 ° slope and moving with a heap to 30 °. There is a possibility of crossing the ditches up to 2,5 m wide and climbing to a wall about 1 m high. Water barriers up to 1,5 m depth are overcome by the ford. The possibility of swimming is not provided. 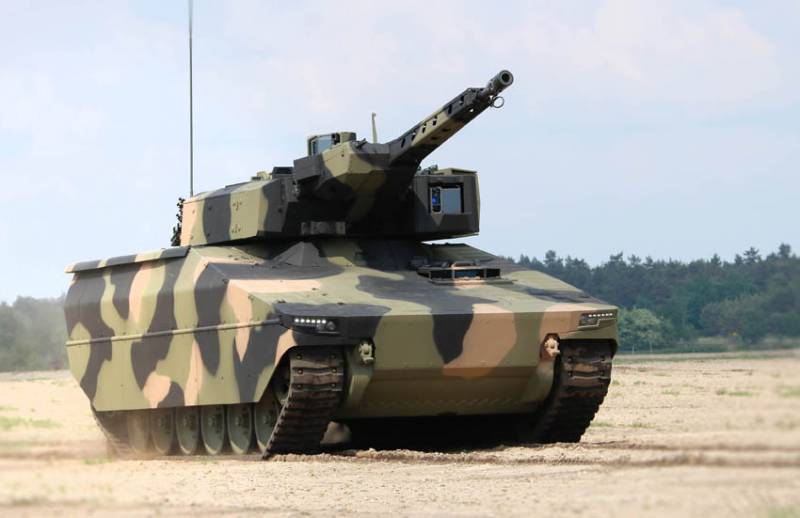 On the roof of the BMP Rheinmetall Lynx is proposed to mount a combat module of the Lance type, made in the form of a swinging turret with a set of necessary equipment and weapons. This module can carry an automatic gun caliber 30 or 35 mm (exhibition sample received 35-mm gun). There are actuator pointing drives and apparatus necessary for using projectiles with programmable detonation. Also, the tower is equipped with a twin machine gun and can carry a launcher for two compatible guided missiles. The Spike LR complex is currently being considered as a missile weapon.

It is alleged that the proposed weapons complex will allow a new infantry fighting vehicle to confidently attack and hit various types of targets at distances up to 3 km. Depending on the type of threat, the crew will be able to use a machine gun, an automatic cannon, or guided missiles. Thus, the BMP "Lynx" will be able to destroy a wide range of targets, from manpower to armored vehicles.

The combat module Lance is equipped with two sets of opto-electronic equipment used to search for targets and aiming weapons. These systems, which are controlled and used by the commander and the gunner-operator, have television and thermal imaging channels, allowing them to solve tasks in any weather conditions at any time of the day. A commanding panoramic sight also allows observation in a sector of width 360 ° without any dead zones. The crew’s work is facilitated to a certain extent by an automated fire control system capable of taking on some functions.

According to the developer, the existing sighting equipment and other equipment of the combat module allow the new armored vehicle to operate not only according to the Hunter-killer scheme, but also to use the Killer-killer principle. One of the main prerequisites for this is the possibility of simultaneous and independent observation and search for targets by the commander and the gunner. 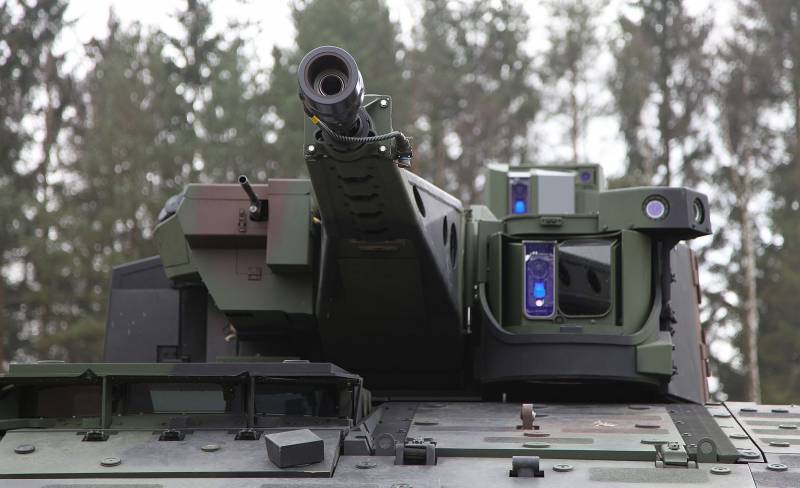 The new project focuses not only on sighting equipment and weapons control systems, but also on other equipment used to monitor the situation. For the timely detection of an attack attempt by the enemy, the BMP Lynx carries a warning system for laser irradiation. In addition, in the foreseeable future, it is planned to introduce the ASLS (Acoustic Sniper Locating System) system, which is capable of analyzing noise and identifying enemy snipers. Some data collected by combat vehicle detection systems can be transferred to other infantry fighting vehicles or commanders using appropriate communications equipment.

Own crew of a new infantry fighting vehicle consists of three people. In front of the hull, on the left side, is placed the driver. The commander and gunner-operator must work in the fighting compartment, their places are placed in the tower. All crew members have their own hatches in the roof of the hull and tower. Thus, the commander can monitor the situation, leaning out of the hatch, which is considered an additional advantage by the developers of the project.

In the aft of the hull "Lynx" is located the troop compartment for the transport of fighters with weapons. Six (in the modification KF31) paratroopers should be placed in special "anti-mine" seats placed at the sides of the squad. Embarkation and disembarkation should be made through the stern ramp. Due to the requirements for enhancing the protection of the body does not have the means to fire from personal weapons. The Lynx modification with the designation KF41 has a longer troop compartment with eight places for the fighters.

The newest infantry fighting vehicle is intended for deliveries to third countries. It is noteworthy that the company-developer has already identified possible markets that are planned to be conquered with the help of a new project. During the presentation, the head of the department of Rheinmetall, responsible for the creation of ground equipment, Ben Hudson noted that the demonstrated prototype received camouflage color, characteristic of the Australian army. So were shown the main marketing objectives. 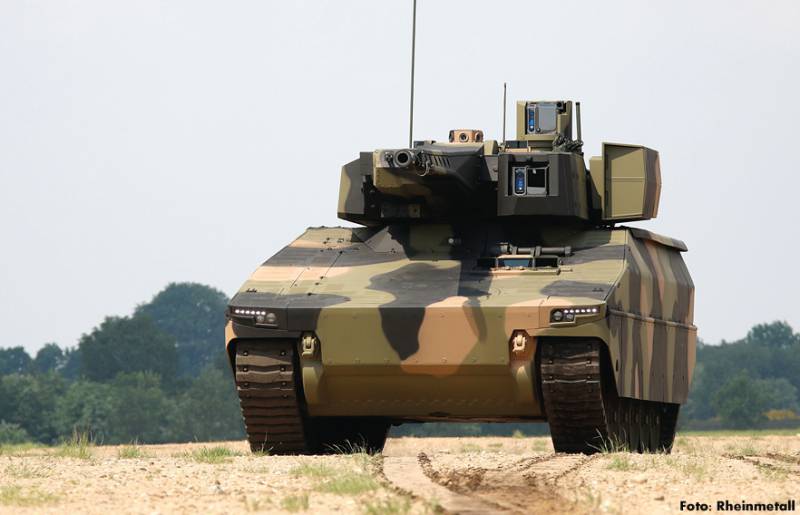 Contracts for the supply of BMP Rheinmetall Lynx has not yet been signed, but some potential customers have already expressed interest in this development. It is alleged that several European countries have already expressed a desire to hold talks on possible supplies. The list of potential buyers who initiated the discussion of a possible contract has not yet been clarified.

It should be noted that quite a lot of tracked infantry fighting vehicles and other similar armored vehicles based on the same principles, as well as meeting general modern requirements, are currently represented on the international market for weapons and equipment. Thus, the new development of the German industry can become the next representative of the already numerous class of technology, although it can become the subject of new export contracts.

As follows from the published data, the Lynx project used both generally accepted, well-tried solutions and new ideas. In addition, the machine is equipped with a significant number of new equipment for various purposes. Thus, it can have significant advantages over older competitors, which should affect export potential. However, for the time being it is not necessary to talk about supply contracts. The existence of the project was announced not so long ago, and the first demonstration of the full-scale prototype “Lynx” took place only a few days ago. If the new BMP and become the subject of supply contracts, it will happen a little later. Potential customers need time to fully explore the new proposal and negotiate with the manufacturer.

Ctrl Enter
Noticed oshЫbku Highlight text and press. Ctrl + Enter
We are
In the footsteps of the exhibition Eurosatory 2016: trends in the development of armored vehicles. Part of 3The action “Military service under the contract is your choice!” In Rostov-on-Don: future contract servicemen, exhibitions and “Russian Knights”
Military Reviewin Yandex News
Military Reviewin Google News
85 comments
Information
Dear reader, to leave comments on the publication, you must sign in.