Russia and NATO: RAND report and its implications

16 2016 June
53
One of the main events of the last days in the military-political sphere was the statements of US Assistant Deputy Secretary of Defense Michael Carpenter. With reference to the results of a recent study, the official said that the current situation in the Baltic region is very complex and may lead to unacceptable consequences. According to American analysts, the Russian troops, in the event of an armed conflict, will be able to break the defense of NATO in just 60 hours or even faster, which requires appropriate measures from the organization.

The concerns expressed by M. Carpenter are based on the recently published report of the RAND Center for Strategic Studies. The document “Reinforcing Deterrence on NATO’s Eastern Flank” by David A. Shlapak and Michael Johnson provides data on the current situation in the Baltic region, and also discusses possible risks associated with the opposition of Russia and the North Atlantic alliance. After examining the current situation, analysts came to harsh and even frightening conclusions. It should be noted that this report was published as early as February, however, as M. Carpenter noted, it still does not lose its relevance.

The general conclusions made by the results of the analysis are made in a separate section of the document. From it it can be understood that the authors of the report consider the current situation in the region to be complex and even threatening to the interests of NATO. First of all, it is noted that various exercises, command-and-staff games and analytical activities force us to make negative predictions about the possible development of events in the region. Thus, in the current situation, Russian troops will be able to get to Riga and Tallinn in no more than 60 hours. 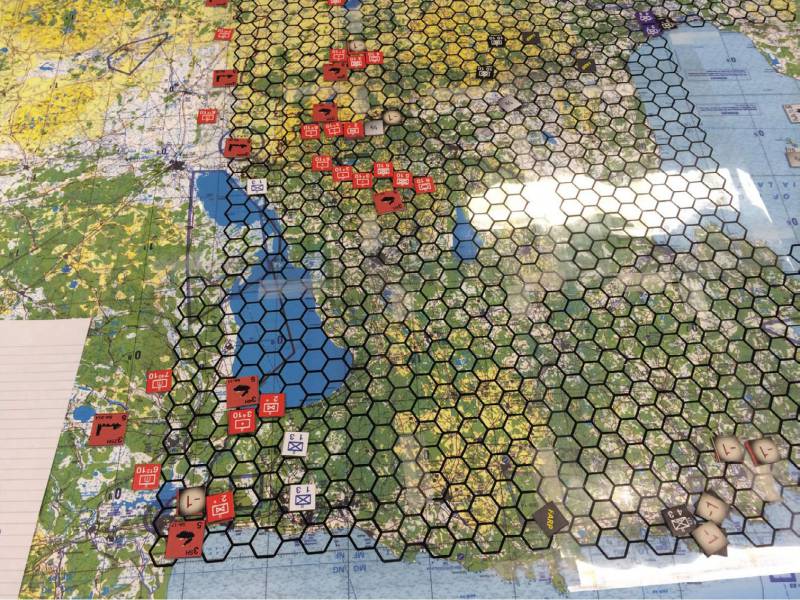 The rapid advancement of Russian troops through the territories of NATO’s Eastern European countries puts the entire organization in a difficult position. It is expected a sharp reduction in the choice of possible strategies and ways to develop the situation. In this case, all available options for one reason or another can not be considered positive.

Calculations show that in order to confidently deter "Russian aggression" in the region, it is necessary to additionally place about seven land brigades, including three heavy armored ones. It is also necessary to provide adequate air support, reinforcement by ground-based fire weapons and a number of other measures. Such a defense system will not be able to securely defend the countries under attack, but, as the report’s authors point out, it will allow changing the strategic picture seen from Moscow.

The last general conclusion of the report concerns the financial side of a hypothetical conflict and the means of its prevention. It is noted that in absolute terms, the organization of the required defense described above will not be too expensive. At the same time, the East European participants of NATO cannot afford such expenses.

The purpose of the latest work of the RAND Center was to study the situation in the Baltic States and to consider the consequences of a possible “Russian aggression”. After the beginning of the Ukrainian crisis, the NATO command views Russia as a potential aggressor, posing a threat to a number of Eastern European states. The Baltic states are seen as the first targets for military aggression. In 2014-15, RAND specialists conducted several activities aimed at simulating a hypothetical conflict in the region. Based on their results, the recent report “Reinforcing Deterrence on NATO’s Eastern Flank” was written, and recommendations for reducing the threat were formed. 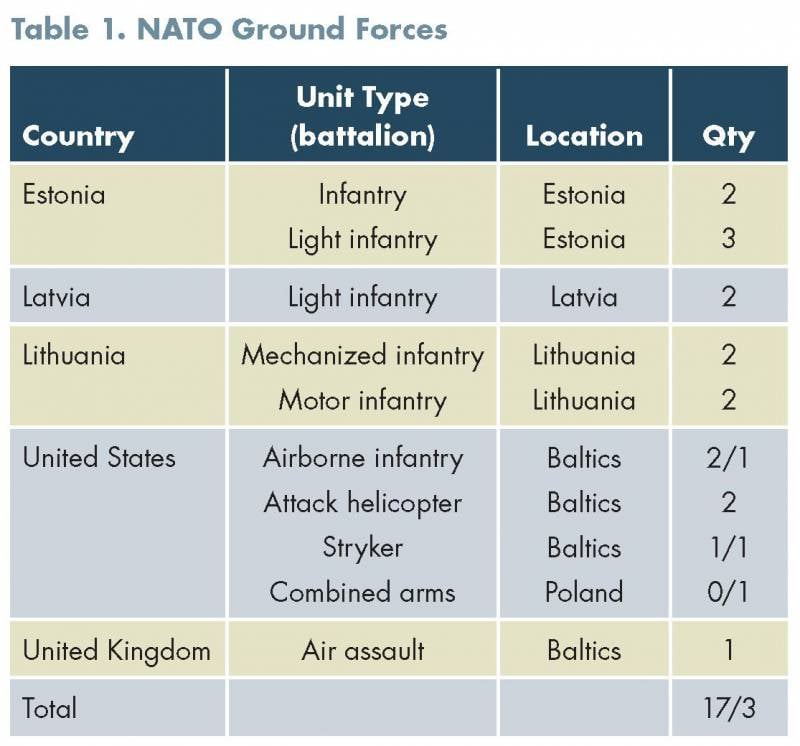 The threat of capturing the capitals of the two countries in just 60 hours leads to the need to build an appropriate defense system. To protect the Baltics from a possible threat, the deployment of seven brigades and the corresponding infrastructure is proposed. According to RAND's estimates, the creation of such a deterrent system of the “aggressor” will require annual expenditures at the level of 2,7 billion US dollars. Given the total gross domestic product of the NATO countries at the level of 35 trillions and the total defense expenditures in 1 trillion dollars, such amounts do not look large.

In addition, the annual spending in 2,7 billion dollars - this is much less than the losses from a hypothetical conflict and the seizure of the Baltic states. As a result, deterring a potential adversary turns out to be much more advantageous than war, both for strategic reasons and for financial indicators.

Conclusions about the seizure of the Baltic for 60 hours were made, not least by analyzing the correlation of forces in the region. YES. Shlapak and M. Johnson reviewed the quantitative indicators of the armies of Russia and NATO countries. The results of this study have become one of the main reasons for concern. 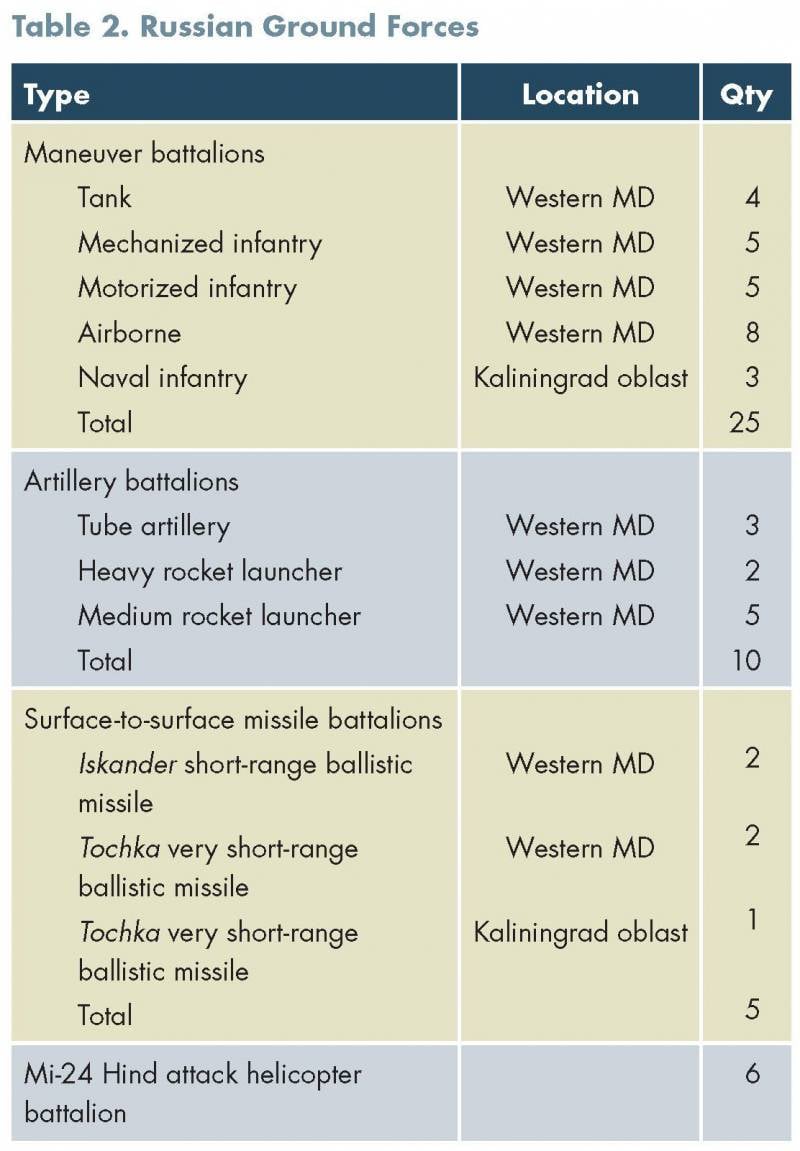 The Russian ground forces, according to analysts, look much more powerful and are also larger in number. The Western Military District has four tank battalion, 10 infantry and 8 airborne battalions. In addition, three similar units of the Navy's marines are deployed in the Kaliningrad region.

Three artillery battalions, as well as seven subunits armed with multiple rocket launchers, should provide fire support to troops. For the solution of some tasks, armed forces with tactical missile systems may be involved. The Western Military District has two divisions each equipped with Iskander and Tochka systems. Another division "Points" deployed near Kaliningrad.

Air support can be carried out by Mi-24 helicopters. According to estimates of RAND specialists, six battalions equipped with such equipment will take part in a hypothetical conflict. 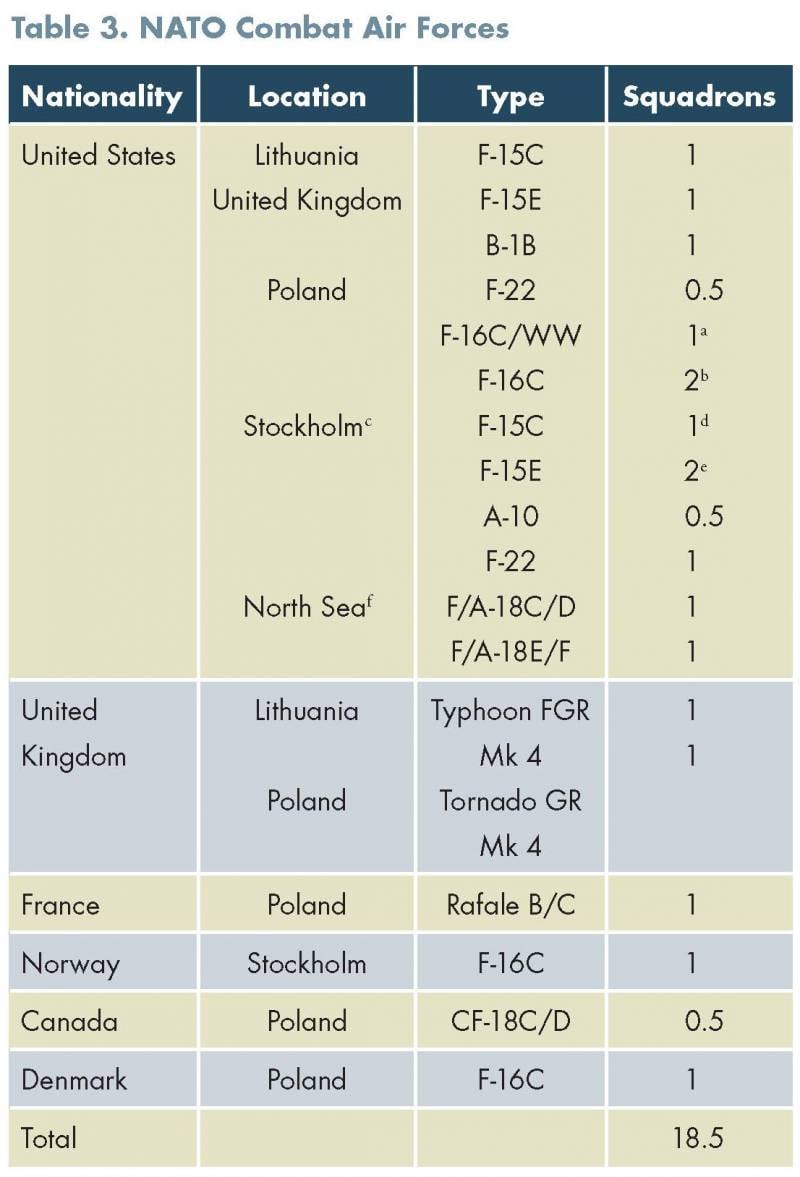 Thus, in the case of the ground forces and the army aviation leadership remains with Russia. In total, only the Western Military District has 46 battalions for various purposes with different weapons and equipment. The Baltic countries and their NATO allies can immediately use no more than 17 compounds. According to American analysts, a similar situation is observed in the field of the air force. Against 27 Russian squadrons, NATO can only set 18. 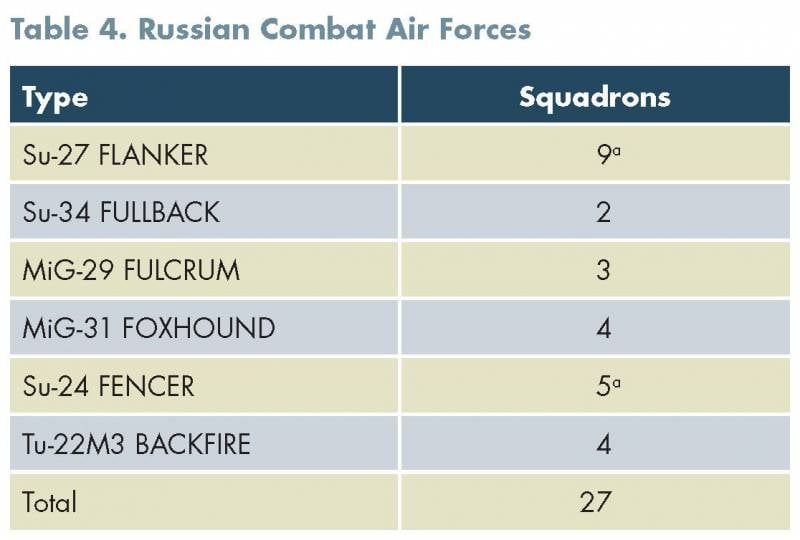 The advantage in the number of troops, according to analysts of RAND, can be realized using the geographical features of the region. So, a blow to the Baltic states can be inflicted both from the main part of Russia and from the Kaliningrad region. In this case, the three countries are under attack from two directions, with corresponding consequences for them and their allies. In combination with a larger number of troops, such a strategy can simplify the advance and capture of countries.

To reduce the risks associated with “Russian aggression”, the authors of the report propose to change the structure of the troops deployed in the region, as well as to reinforce them with a number of additional units. It is necessary to strengthen the land component, as well as deploy additional armored formations. Naturally, such a modernization of defense would require additional expenses, but their analysts found it acceptable and not too large amid possible risks.

The reaction to the RAND report “Reinforcing Deterrence on NATO’s Eastern Flank” is interesting, and the statements of foreign officials are the most curious. Thus, representatives of the US military and, a few months after publication, consider the report as an actual document to which attention should be paid. In addition, it is with the recommendations of RAND that the Pentagon plans to strengthen its troop grouping in Eastern Europe. 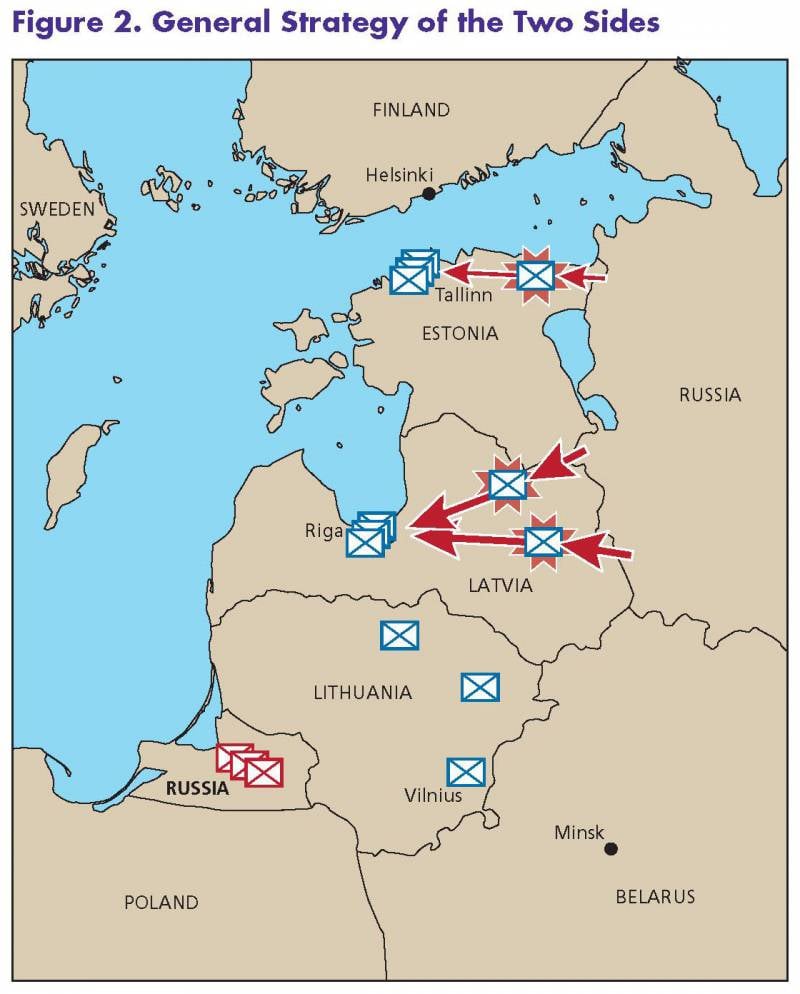 The NATO Secretary General commented on the data on the "seizure of the Baltic states in 60 hours" differently. Jens Stoltenberg skeptical about such calculations. He argues that NATO can protect all its allies from any threats. At the same time, however, the organization’s secretary general added that it was for this reason that the existing defense system was being modified.

Despite statements about the possibility of protecting all allies, the leadership of NATO decided to strengthen the military grouping in Eastern Europe. Perhaps this was the result of the study of certain reports authored by research organizations. 14 Jun became aware of plans to deploy four additional battalions. These units can be sent to Eastern Europe as early as next year.

As you can see, NATO continues to build up a grouping of troops in Eastern Europe and in the Baltic States. As a pretext for such actions, a hypothetical “Russian threat” is now being considered, studied by specialists from various organizations. The February report of the RAND Center, as well as the Pentagon’s reaction to it, show that foreign commanders and politicians once again see Russia as a threat, to combat which it is necessary to take measures of a military nature. At the moment, the main way of such a confrontation is to strengthen the military grouping and conduct exercises. What will be the next steps of NATO and the participating countries will become clear later. However, it is already clear that in the foreseeable future we should not expect an improvement in Russian-NATO relations.

Ctrl Enter
Noticed oshЫbku Highlight text and press. Ctrl + Enter
We are
United Europe is preparing another trip to the eastResults of the week. “I recently believe that everything in life is possible, even that which is impossible”
Military Reviewin Yandex News
Military Reviewin Google News
53 comments
Ad