Media: T-50 is almost ready to launch in the series.

15 2016 June
256
UAC is preparing a preliminary opinion on the release of the installation batch of the newest T-50 airline complexes (PAK FA) for the Russian Aerospace Force, the newspaper reports News with reference to a source close to the aircraft manufacturing corporation. 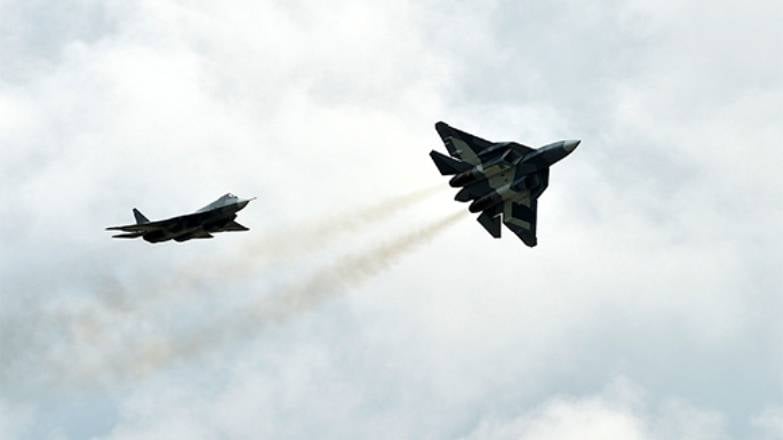 According to the interlocutor, "The 20 of June in Komsomolsk-on-Amur will take off the eighth vehicle of the series, which almost completely meets the requirements of the military in terms of combat capabilities for a fifth-generation fighter."

“Unlike previous aircraft, the eighth board is fully equipped with equipment and systems prescribed in the terms of reference for the creation of a promising front-line complex aviation. It is with the advent of this fighter that we can say that the T-50, as a combat unit, has gained a real face and is ready for mass production in the interests of the VKS ”,
he explained.

“At the moment, in the shops of the Komsomolsk-on-Amur Aviation Plant (KnAAZ) there are four more T-50 in varying degrees of readiness. Machine number 9 will join the flight tests of the complex in September. The next two, 10-i and 11-i, are on the stocks: the first fuselage is attached to the first, the center section is assembled from the second. By the end of the year, both will enter the flight test phase, ”the source said, noting that in the fall, the KLA will be ready to sign the contract for the delivery of the installation batch.

As stated by the Commander-in-Chief of the VKS, Viktor Bondarev, the deliveries of cars should begin next year.

“The installation batch is at least 12 machines, that is, one squadron. They do not include fighters currently undergoing tests. That is, in 2017, in the interests of the VKS, completely new combat vehicles that meet the requirements of the technical specifications will be built and delivered, which will have to go through a stage of military tests, after which we can talk about expanding the procurement, ”said the head of the Center for Analysis of Strategies and Technologies (Center AST ) Ruslan Pukhov.

According to the expert, one should not expect that in the coming years, the T-50 will become a mass aircraft. "If only because the fifth generation engines, known today as the" Type 30 ", or second-stage engines, are under development," he said.

“Serial T-50s will go into service with 117С engines, the same as on Su-35 fighters. Although they provide the necessary total thrust, sufficient to achieve supersonic cruising speed, they do not meet the requirements of the fifth generation in terms of the ratio of weight and thrust, as well as fuel consumption. The technical complexity of engine development requires very long bench and flight tests, which will affect the overall development time of the T-50, ”noted Pukhov.

According to various estimates, these engines will receive the PAK FA only in 2025-2027. “Only then can we say that the T-50 has become a real fifth-generation aircraft,” he added.

“It seems to me that today we need to be ahead of the curve, not only developing T-50 under the FGFA program (export name PAK FA, Fifth Generation Fighter Aircraft) with our strategic partner in the field of military-technical cooperation, India, but also by offering it to Algeria and Vietnam. Both countries have an independent military-technical policy and have their own funds for the purchase of modern weapons. Thanks to the alliance with them, the creation of the T-50 can be cheapened by making it a massive fighter, ”said Pukhov.