16 2016 June
106
The Bilderbergs talked again behind closed doors. This time in Germany, under the watchful guard of the German police. Among the participants of the meeting, which was held in Dresden 9 — 12 June, were Ursula von der Lyayen (Minister of Defense of the Federal Republic of Germany), Christine Lagarde (IMF Managing Director), Henry Kissinger (ex-US Secretary of State), Europe), Ben van Burden (CEO of Royal Dutch Shell) and other influential and wealthy people. It is also known that on the eve of the meeting, Henry Kissinger had a meeting with Donald Trump. There is an opinion that the Bilderbergs do not want to allow Trump to the presidency of the United States; their choice - H. Clinton. 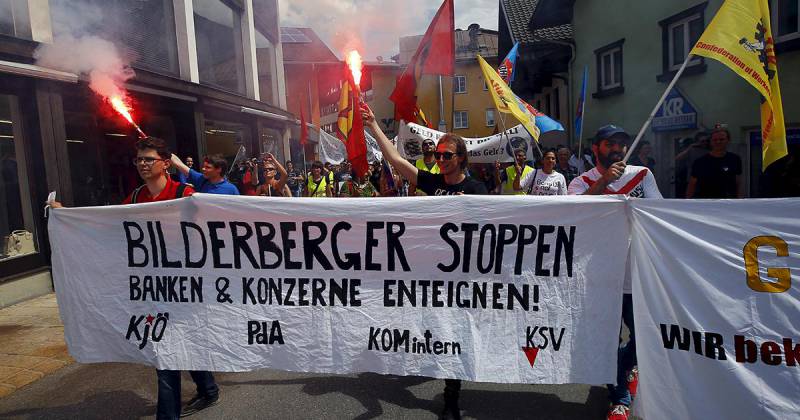 The meeting of members of the Bilderberg club was held from 9 to 12 June in Dresden. Reporters, of course, were not allowed to attend the event at the Taschenbergpalais Hotel. It is not possible to find out what exactly these people discussed and what they “decided”, despite the fact that not so long ago the organization went online and even posted its own website, which publishes the topics of the meetings. These topics will not say anything concrete to the average person. They are formulated very vaguely and are similar to the agendas of any political forums, popularly referred to as “talker”.

Among the current topics are issues of cyber security, migration in Europe, the problems of the unity of Europe and the discussion of some "current events". The topics of China, the situation in the Middle East, the American debt are touched upon. Geopolitics in the field of energy and commodity prices excited the audience this time (it was not without reason that Ben van Burden, General Director of Royal Dutch Shell, and Robert Dudley, Director General of BP, as well as a representative of Investor AB, an investment company, were invited. Jacob Wallenberg). They also discussed issues related to the middle class with prekariatom ("Precariat and middle class") and the area of ​​technological innovation. And, of course, it was not without talking about Russia (the topic number 5 in general list).

“To lead. Economy" suggest that the interlocutors could discuss the feasibility of geopolitical pressure on the PRC (over the territories in the South China Sea), the risks of European integration against the background of the migration crisis, the aggravation of trade relations due to barrage tariffs on Chinese steel from the EU and the US, and continued pressure on Russia despite the fact that in the parliaments of European states there is a growing rejection of anti-Russian sanctions. Probably an important issue was the presidential campaign in the United States and the alleged nomination of Donald Trump by Republicans. Interestingly, "Bilderberger" and the situation in the global oil market.

The publication reminds that in the overwhelming majority of the participants in closed club meetings represent the interests of global capital. They are pursuing a special “Bilderberg” political line that primarily suits corporations, banks and larger structures. That is why the "Bilderberg" is referred to as a shadow world government.

“And the coverage is impressive, given that this is not a scientific conference, and more than a hundred very busy people are unlikely to gather for several days without a good reason,” writes in the journal "Expert" Mikhail Rogozhnikov. - Moreover, there is mentioned Davos. It was recorded once, as young Tony Blair left the meeting with a light step, after which his career took off. In general, nothing surprising.

It is also known that on the eve of the meeting, Henry Kissinger held a meeting with Donald Trump. There is an opinion that the Bilderbergs do not want to allow Trump to the presidency of the United States; their choice - H. Clinton.

“Bilderberg will be engaged in a campaign against Britain’s withdrawal from the European Union,” points out in an article for "Komsomolskaya Pravda" publicist Israel Shamir. - In the US, billionaires bet on Hillary Clinton. They do not like Donald Trump, and they certainly will try to ensure his defeat. Apparently, this explains that 93-year-old Henry Kissinger came to the club meeting immediately after meeting with Trump. "

Allow yourself to doubt this. First of all, neither the topic of the presidential race in the United States, nor the separate issue of Trump or his rival Clinton has been announced for discussion. Secondly, on the eve of the event, the Bilderbergs themselves insisted that the topics of the Dresden meeting would not include the presidential elections in the United States, the planning of wars, or global domination. People will just talk about "megatrends." This can be read, for example, in the newspaper «The Independent».

However, in the case of this club, nothing can be said with confidence. Adam Lüscher, the author of the article in The Independent, recalls that the global policy influenced by the club is as follows: Margaret Thatcher, who supposedly impressed David Rockefeller and Henry Kissinger (Bilderberg meeting of 1975), became Prime Minister of 1979. the UK Minister; Bill Clinton was only the humble governor of Arkansas when he visited Bilderberg-1991, and a year later he was elected president of the United States. The author reminds me of Tony Blair (he was mentioned above). “Pure coincidence,” the journalist says ironically.

He also notes that no protocols are adopted at the 2016 meeting of the year. The conference was held under enhanced security measures provided by the German police with the logistical support from the "Airbus" (one of the world's largest traders weapons). Nevertheless, the charming “bilderbergers” assure the public that there is no “conspiracy of the global super elite”, but there is only a three-day “summer camp” for influential people who have gathered to talk peacefully.

Thanks to the list of topics on the club's website, it is known that one of the special topics of the current meeting was the question of the prekariat - the rising social class.

The term “precariat” (“precariat”) became popular thanks to the English economist, Professor at the University of London G. Standing, the author of the book “Prekariat: A New Dangerous Class” (translated into Russian).

The term “prekariat”, notes in an article for "Strategic Culture Foundation" Olga Chetverikova, arose from the combination of the words: “précaire” (unreliable) and “proletariat”. The word appeared at the end of the 1970-s. Precariae - those with the lowest incomes, working part-time, seasonally or in the shadow sector. The financial situation of these people does not allow them to ensure their independence. For the first time, the term was used by French sociologist Robert Castel, then adopted by the Italian economist Alex Foti. The latter argued that the prekariat in a post-industrial firm is the same as the proletariat in an industrial enterprise. Standing, on the other hand, created a concept that describes the prekariat as a social class in the making, whose distinguishing feature is that the level of training of its members is higher than the paid work that employers offer them. This is a kind of over-qualified class, which includes: a) representatives of the proletariat who cannot achieve what their parents had; b) migrants; c) graduated young people who are not able to find a decent job. Three groups are united by a sense of insecurity and the actual lack of social support. For the powerful of this world, the new class is very dangerous.

Chetverikov asked a question: why did G. Standing be invited to the Bilderberg club? She believes that the reason is that the scientist is a supporter of the concept of "unconditional basic income" (money allowance guaranteed to every citizen, not dependent on needs, but due to the activity that is expected from a citizen - for example, participation in elections). In 2016, such an allowance was attempted to be introduced in Switzerland, but the initiative did not pass: 5% of the plebiscite voted against the introduction of the “unconditional basic income” at the 76,9 referendum of June. The fact is that such an idea is fraught with the decomposition of work ethic.

Thus, we add that at the club meeting today there was one feature: a discussion of the future of the new class - the “prekariat”. Moreover, the bilderbergers did not hide this topic, and they submitted it on their website under the same number as the middle class: “Precariat and middle class”. Probably, at a time when the middle class began to rapidly roll down and even fall into poverty, the powerful people decided to attend to the issue of “prekarya”. If earlier, in Marx and post-Marx times, the owners of factories and plants could not help but worry about the proletarian activity, now, when the lines between the proletarians and the middle class are often erased, globalizers, for political domination, are ready to turn everyone into “precarians”: throw some money to human herds, if only they would vote, if only the appearance of “democracy” was preserved, if only the world political elite would retain the dominant privileged position.

Observed and commented on Oleg Chuvakin
- especially for topwar.ru
Ctrl Enter
Noticed oshЫbku Highlight text and press. Ctrl + Enter
We are
Results of the week. “I have sawdust in my head. Long words only upset me. ”Bilderberg club and its interests in Ukraine
Military Reviewin Yandex News
Military Reviewin Google News
106 comments
Information
Dear reader, to leave comments on the publication, you must sign in.