17 2016 June
18
Fairey Delta 2, also known under the designation FD.2, is an English research supersonic aircraft that was designed and built by Fairey Aviation. The aircraft was built within the specifications for which it was necessary to create a machine for testing at subsonic and supersonic flight speeds. At the same time, the maximum speed of the aircraft was to exceed 1000 miles per hour. A total of two prototypes were built. Both of them have survived to the present day and are represented in British museums, including the Royal Air Force Museum in the city of Cosford.


After conducting experiments with aircraft models with vertical take-off and landing in the 1947 year, Fairey received a request about the possibility of achieving supersonic flight speeds on such aircraft. The Ministry of Procurement issued the ER103 specification, which provided for the construction of a research aircraft and was accepted for consideration by two British companies English Electric and Fairey. Each of them was supposed to release two aircraft. So, the company English Electric developed the twin-engine P.1, which was later called Lightning, and the company Fairey Aviation developed the aircraft equipped with one turbojet engine, a pointed nose part and a triangular-shaped wing - the Fairey FD.2 “Delta II”. The contract for the production of the FD.2 aircraft was signed in October 1950 of the year, but the real work on it began only at the end of the 1952 year.

It is worth noting that Fairey specialists began to deal with the problem of a triangular-shaped wing as early as the Second World War. But the main work in this direction was carried out in 1947 year in the framework of the creation of a prototype fighter of vertical takeoff and landing under the designation FD.1. The fighter tested by 12 in March of 1951 was not massive, it did not even go out of the experimental development stage, and its subsequent purpose was to investigate the properties of a triangular wing when flying at low speeds, since the Dervent 1 engine installed on FD.8 Rolls-Royce was only 15,98 kN. At the same time, a project was being implemented to create an aircraft capable of flying at supersonic speeds. In 1950, it was found that the development of a combat supersonic aircraft was quite possible, and by 1954, the work of Fairey engineers in this direction was completed, and they ended with flight tests of the first prototype. 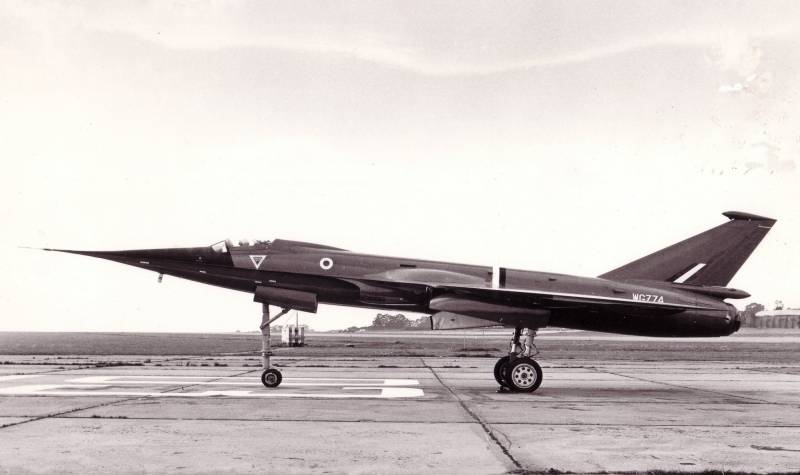 His first flight research aircraft Fairey Delta 2 made 6 October 1954 year from the airfield at Boscombe Down. 17 November 1954, the aircraft suffered due to engine failure, an unpleasant incident occurred during the test flight of the 14. At this point, the car was at an altitude of more than 9 thousands of meters at a distance of about 50 kilometers from the airfield. Thanks to the skill of the test pilot, the plane successfully planned and boarded the airfield, but with very high speed. During landing, the aircraft damaged the nose landing gear. Damage received during landing delayed the next flight immediately to 8 months. The next time the plane with the tail number WG774 rose to the sky only in August 1955 of the year.

At the same time, already in October, the 1955 of the year for the first time the aircraft was able to break the sound barrier. With each new flight, the speed of the aircraft increased, reaching M = 1,56 (1654 km / h) in November of the same year when flying at an altitude of 10 975 meters. Even then it was decided to attempt to establish on the plane of the world record flight speed. At that time, the absolute speed record belonged to the American fighter North American F-100 Super Saber and was 1323 km / h. Already 10 March 1956, this record fell completely. The joint efforts of the designers and pilots were satisfied with 10 March 1956 of the year - during the flights in a straight line at a distance of 15,6 kilometer and height of 11 580 meters the average flight speed was recorded - 1822 km / h. During the record flight, which lasted for 23 minutes, the plane was able to fly a distance of 386 km. Despite the short duration of the flight, the cabin structure of the pilot warmed up to + 50 ° С (at the ambient air temperature –60 ° С).

The second Fairey FD.2 research aircraft, the Delta II, also flew into Boscombe Down, but only in February of 1956. Since then, both cars were used in a variety of research projects and programs of those years. Ultimately, the first aircraft released was transferred to the British Aircraft Corporation, after which the aircraft was given the new name BAC.221. For testing in a wind tunnel, the plane was fully equipped with a new, lively wing of the form that will be used in the future on the Aerospatiale / BAC Concorde aircraft. At the same time, the nose of the BAC.221 aircraft could be lowered in order to improve the pilot’s visibility when taking off and landing, this decision will also be used in the future on the famous passenger supersonic liner Concorde.

It is worth noting that, having joined together the developments of the companies of the British Aircraft Corporation and the French Sud Aviation in the field of gliders and engines, a plane resembling an enlarged copy of the experimental Fairey Delta 2 was born. Only the new car was able to carry up to hundreds of passengers at speeds of more than 2000 km / h. Presented in 1962, the supersonic passenger Concord, produced by the British-French consortium, reduced the flight time between London and New York to 3,5 hours. The pledge of such speed of movement was, of course, the supersonic speed of the liner. At the same time, the world's leading airlines perceived the very fact of the appearance of such an aircraft with great optimism. Even the largest at the time, the American company PanAm made an order for 4 European "Concord", which for Americans, who had their own advanced aircraft, was not typical.

The experimental supersonic aircraft Fairey Delta II was a midplane, which was made according to the “tailless” scheme, with a triangular (cut at the ends) wing. The wing of the aircraft, made with the use of profiles of relative thickness 4%, had straight leading edges with a sweep of 60 degrees and trailing edges located perpendicular to the axis of the aircraft. In the system of longitudinal and transverse control, elevons were used, the large chord of which provides the machine with good controllability at small deflection angles and low resistance growth. Fairey Delta II was designed in accordance with the area rule, the requirement of this rule was not fulfilled due to the characteristic change in the shape of the aircraft fuselage, but through the arrow-shaped keel and the use of air intakes of special design. All rudders were controlled with the help of irreversible boosters and devices for loading control levers of spring type. In the control system of the elevator and ailerons, a gearbox was used, which has an adjustable gear ratio between the deflection angle of the rudders and the angle of extension of the control stick depending on the speed of flight of the aircraft. Both systems initially operated in conjunction with a manual change of the gear ratio from 1: 1 to 9: 1, but later an automatic system was used. 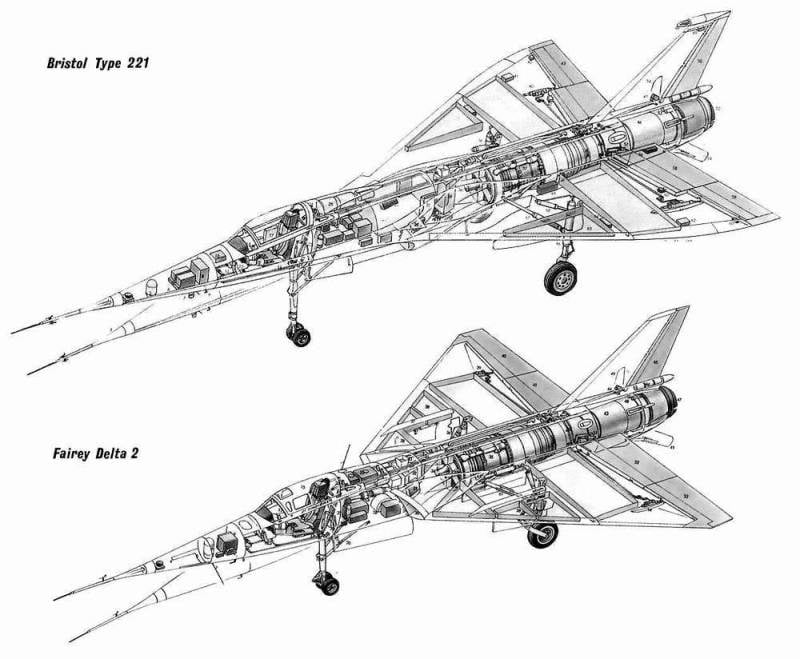 The fuselage of the aircraft FD.2 consisted of 3-x parts. The front part of the fuselage was made in the form of a pointed cone with an oval cross section; it was movable. In order to increase visibility from the cockpit at the time of landing, it could deviate down by 10 degrees. In front of the fuselage was located the cockpit with the ejection seat, it was closed by a fairing, equipped with only three small-shaped windows designed for observation upwards and along the sides. Front fixed cockpit glass consisted of 2-x parts. The main part of the fuselage of the aircraft of constant oval cross-section was completed with a short tapered part, which was formed by folded brake covers having 4 sections and closing the adjustable output nozzle of the engine. Under the rudder there was a brake parachute container. The landing gear was three-post with single wheels. The front landing gear was removed back. The main landing gear of the aircraft with complex kinematics were retracted into the near-fuselage parts of the wing. Due to the lack of space in a thin triangular-shaped wing, narrow solid rubber tires were used on the wheels of the aircraft.

The power plant and the heart of the experimental aircraft Fairey FD.2 "Delta II" was a turbojet "Avon 14" of the company "Rolls-Royce", developing in the afterburner mode thrust 53,38 kN. Unregulated side air intakes had sharp upper edges pushed forward (during flight at supersonic speed, oblique shock waves formed on them) and rounded subsonic lower edges. In the lower part, in the middle of the fuselage, there was an additional slit air intake, which was opened when flying at high angles of attack, as well as when the aircraft engine was operating on the ground. The fuel was located in the wing tanks, as well as in the fuselage tank, located between the air intakes. 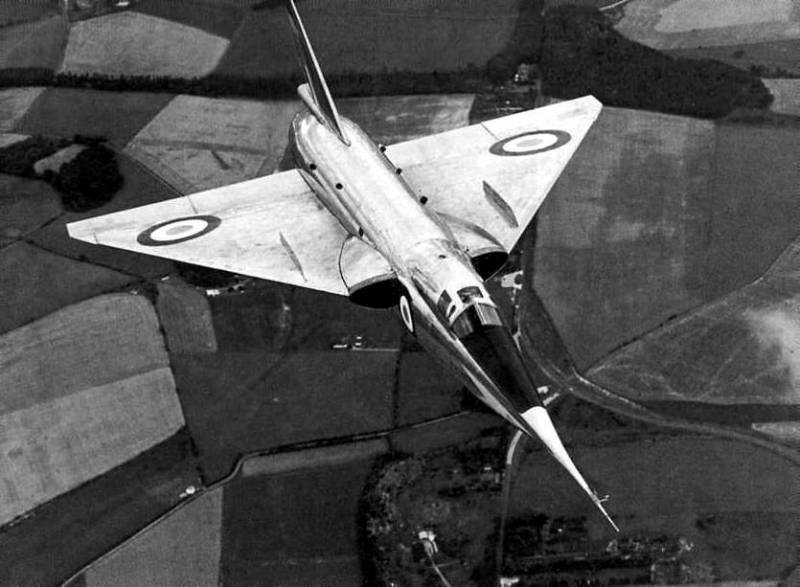 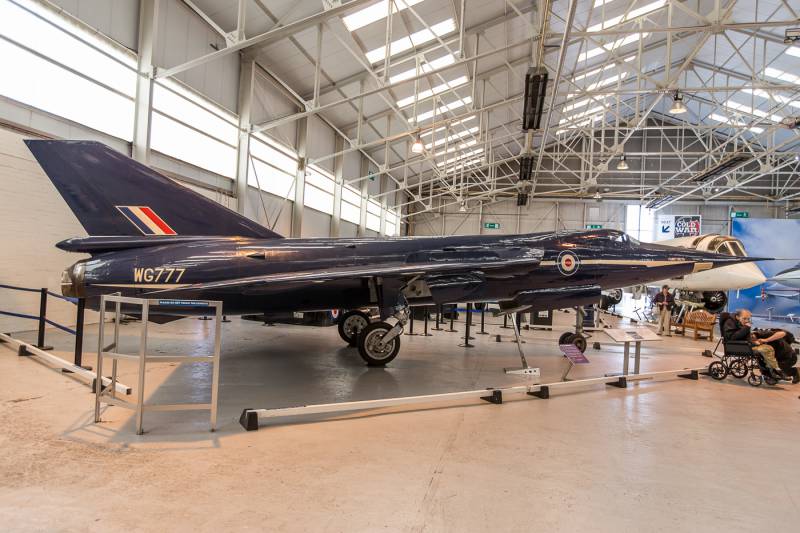 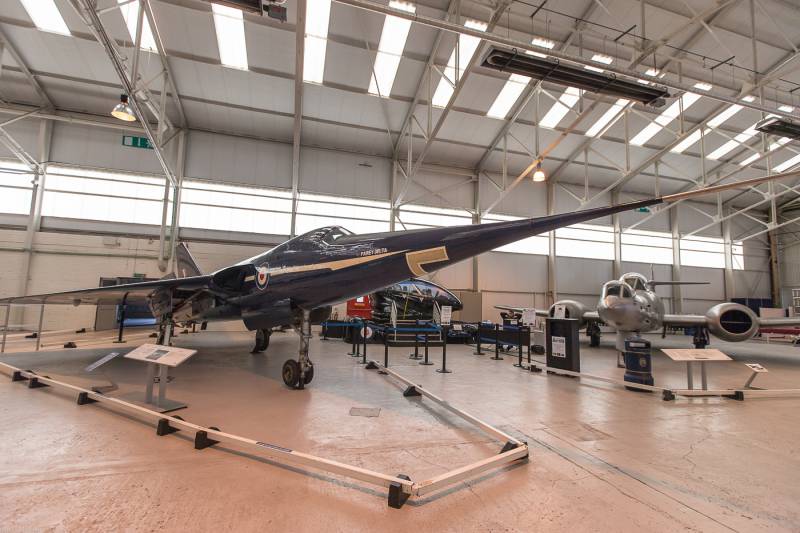 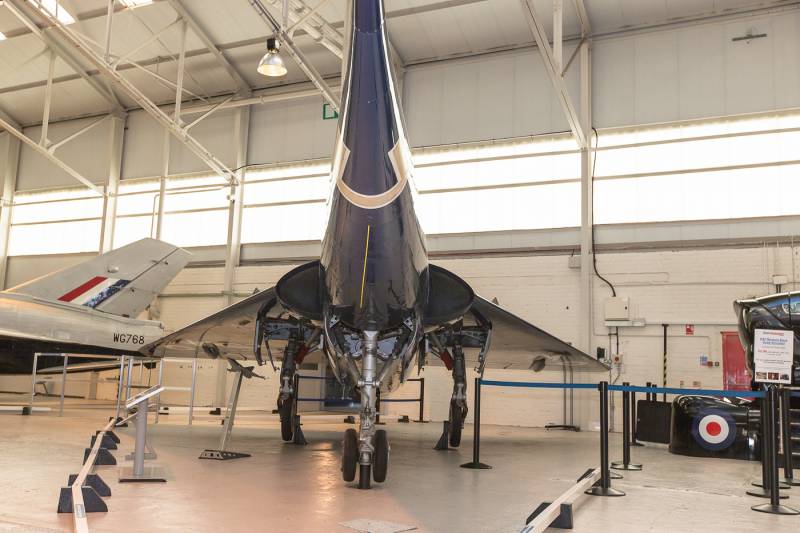 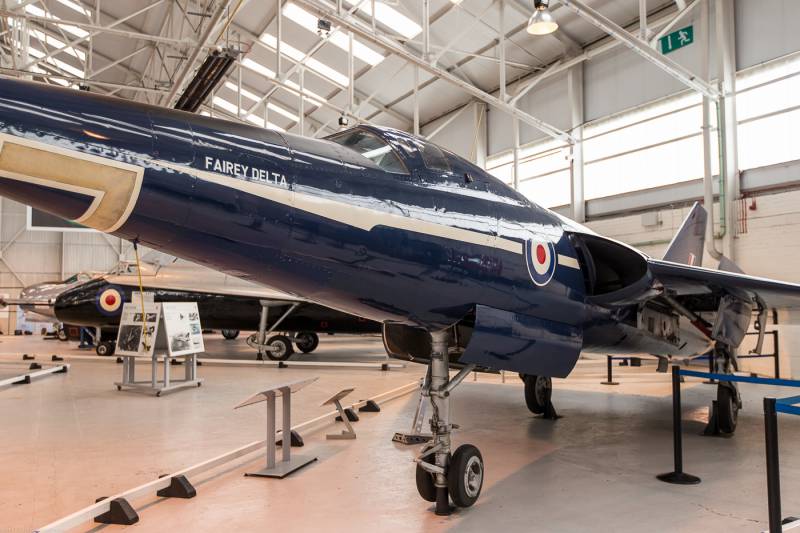 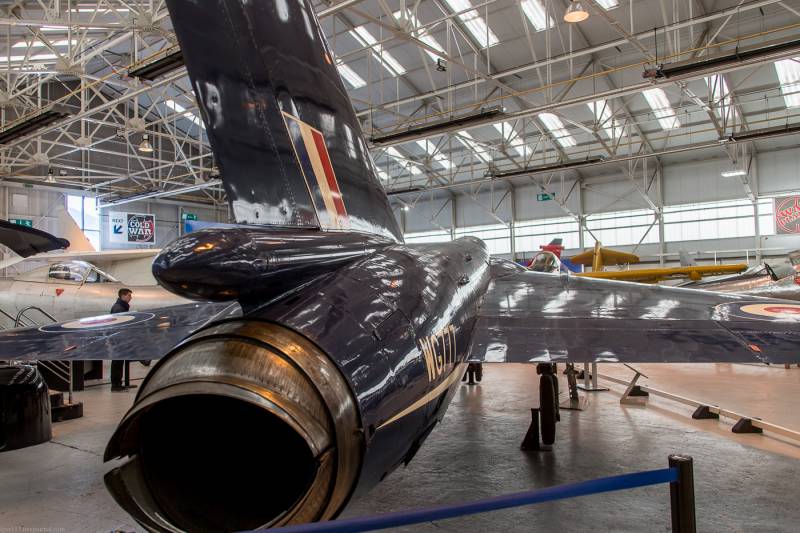 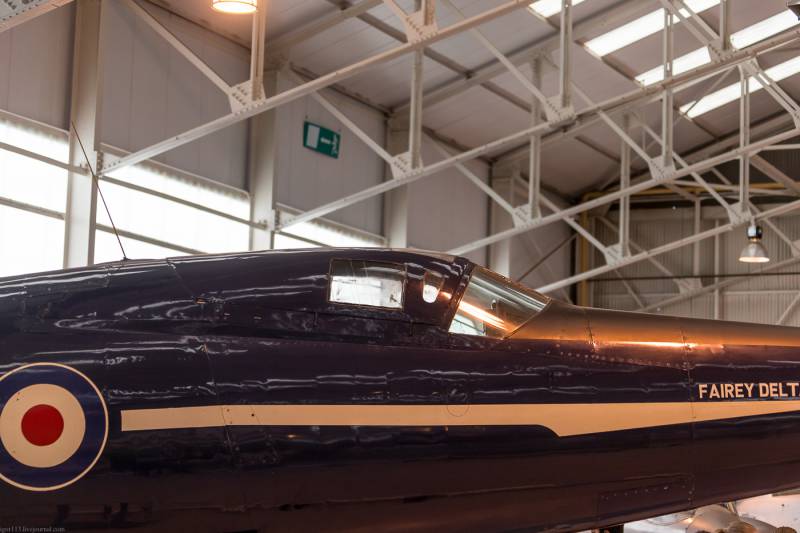