Our blog publishes a shortened version of the interview, available online on the website of the newspaper.

Why do you call war in the city "the final battlefield"?

Pierre Santoni: At all times, warlords tried to choose a battlefield where they could fight the enemy. For several centuries, the army in large numbers fought in the field. If not to take the Trojan War as an example, the cities were first of all taken with the help of a siege. Behind the line of the city wall there was practically no fighting, because as soon as the enemy took up fortifications, the besieged surrendered, and the city was often looted. 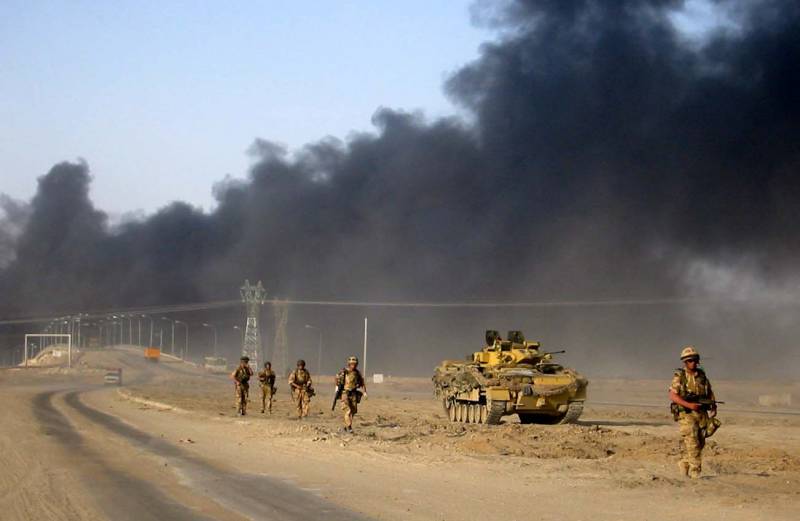 British soldiers patrol in Basra, 2003 year (s) bobshepherdauthor.com
Frédéric Chamo: To date, the residential area is a “leveler of technology”. This is the battlefield where the enemy can consider himself equal to the modern army, based primarily on technology. In France, in particular, a city in the 19th century could become a source of urban uprisings, but not a clash of equal forces. The use of the city as a battlefield is a relatively new phenomenon. We attribute the birth of this phenomenon to the war in Spain in 1936 and the Sino-Japanese war 1937.

Why do you write in your book that from the point of view of the war in the city of Stalingrad is a “myth”?

PS: First of all, it became a myth thanks to literature and cinema. From our modern point of view, it should be noted that the forces involved in the battle reached a staggering size. Moreover, we believe that this battle was not fought well, especially by the Germans, who rushed headlong to the Soviet positions. They had not learned the lessons of Madrid that had taken place several years earlier. In reality, the victory did not happen in the city. With the operation “Uranus”, the Russians succeeded in a bypass maneuver, a maneuver for the environment. But the outcome was not in the city, although Stalingrad remains the “mother of all the battles in the city,” primarily representing the fierce resistance to the Third Reich.

You mention the very difficult physical and psychological conditions of the modern battle in the city, and you believe that there is nothing more like the trench battles of the First World War. Why?

F.SH .: In the course of a battle in an urban setting where the soldiers are face to face, first of all, the infantrymen and sappers are never far apart. We do not insist on bayonet fighting, but those who fight are people, not missiles or unmanned vehicles. Fighting in urban settings refers to all the basics of war. He leads to a new discovery of maneuver and duel.

You mention the battle for the Iraqi Basra in 2003, emphasizing that the British who fought there were the most competent in urban battle science, thanks to their experience in Northern Ireland. Could you explain?

PS: The British army had over thirty years of experience in fighting in urban conditions in Northern Ireland. If we talk in terms of tactical skills, relations with the civilian population, the application of the strategy of fighting in urban environments, unique competences were demonstrated, which were again demonstrated in Basra. Original approaches to training and instruction could be noted, which allowed soldiers to foresee a hostile reaction, for example, avoiding the movement of civilians. The British were the NATO army with the greatest experience in conducting this kind of hostilities. Let's not forget that improvised explosive devices appeared in Northern Ireland in 1972, and this year the army used engineering armored vehicles in Belfast, during Operation Motorman. In 1990's they were faced with a sniper war by the IRA. It was then that they developed what we call micro-tactics: the format of movement in a hostile zone, the creation of a special uniform, such as, for example, made from Gortex fabric, etc.

But at the same time, you show that the experience of the British soldiers was not enough in Basra

PS: The British were faced with very serious problems, losing soldiers and armored vehicles, which were burned. Despite the fact that at that time the British were the only ones who had special training, close to training in fighting in the city.

F.SH .: But they were faced with a level of violence that exceeded their expectations. But they responded well, not allowing themselves to be absorbed. For this reason, we explain that the residential area is not very difficult.

And you advise the soldiers who participate in such combat actions to use “hooligan methods” when meeting with unforeseen circumstances.

F.Sh .: We are talking primarily about “hacker skills” that allow you to penetrate where it should be: it is a mount, an ax, a knife for chopping ice, a shovel ...

You mention Mogadishu in 1993 year, which led to the failure of the US-led coalition. Is this the worst-case scenario, but at the same time the most realistic, which the French army may face in the future?

PS: In the 1993 year in Somalia, the armies that took part in the operation came out of the Gulf war, during which tactical success was very impressive. In Somalia, the humanitarian mission began to pass not very successfully, with an extreme level of violence. Let's not forget that the Italians who took part in the battle at the Pasta checkpoint faced the most difficult battles for them after the Second World War. And the French from the 5 Interspecific Expeditionary Regiment (5e RIAOM), led by Colonel Saki de Sanne (Saqui de Sannes), also faced fierce accompaniment, which the French have not had to deal with, perhaps since the wars of Indochina and Algeria. We want to say that every city, every case is unique. This is a victory of action over planning.

Ctrl Enter
Noticed oshЫbku Highlight text and press. Ctrl + Enter
We are
Commentary on A. Petrov's interview “Fire and Tactics in the Russian Army: Another Look”About revolution in military science
Military Reviewin Yandex News
Military Reviewin Google News
85 comments
Information
Dear reader, to leave comments on the publication, you must sign in.