US in attempts to open a "Mongol front"? About Kerry's visit to Ulaanbaatar and statements about Mongolia’s “dangerous neighborhood”

15 2016 June
135
Last Sunday, an event occurred that, as it happened, rare Russian mass media honored with their attention. We are talking about the official visit to Mongolia of US Secretary of State John Kerry. 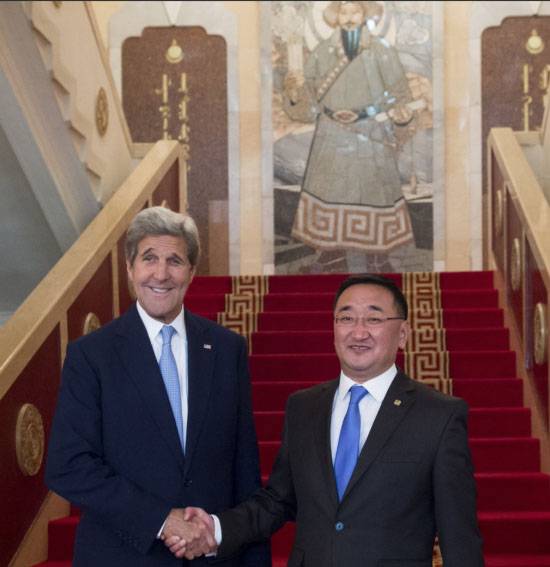 It would seem, so what, of his own, from the fact that the chief American diplomat (ex officio) visited this Asian state? What is this to us here in Russia? .. But there is a matter ... And the substantial interest in Kerry’s visit to Ulan Bator is at least what statement the American Secretary of State has allowed himself to make from the rostrum of the Mongolian capital. The fact is that from the speech of John Kerry, the whole of Mongolia learned that it is “an oasis of democracy sandwiched between Russia and China.”

The fact that Mongolia is located between Russia and China, the Mongols, of course, knew before the visit of the high American guest. But the fact that it is “squeezed” (this is with a territory of more than 1.5 million square kilometers - like a good dozen not of the smallest European states), and even a “democratic oasis” against the background of recent statements from the US - was listened to, , with genuine attention.

From the speech of John Kerry addressed to the people of Mongolia, the implication was that this country is clearly endangered by its neighbors (of course, “undemocratic”), and that the States are literally at any moment ready to come to the Mongols to help “protect the Mongolian democracy” ... 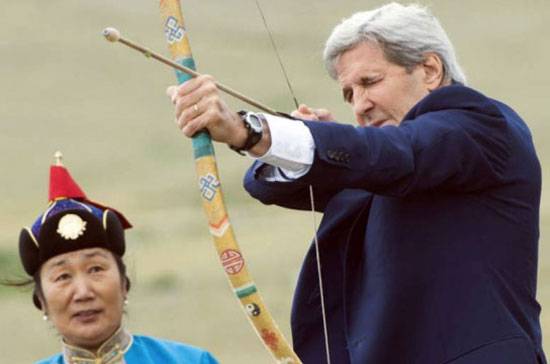 It is noteworthy that Mr. Kerry made his visit to Ulaanbaatar on the eve of the day when events were held in Mongolia as part of a cultural exchange to celebrate the Day of Russia - a few days before June 12. In particular, on the occasion of the Russian national holiday, a reception was held at the Russian embassy in Ulan Bator. The events, among other things, were devoted to the anniversary of the establishment of diplomatic relations between Russia and Mongolia (95 years).

Is it possible in this connection to call the choice of the date of Kerry's visit to Mongolia bordering on Russia random? There is an opinion that the State Department does not allow such accidents, and the visit was carefully planned, including the date of arrival of the US Secretary of State in order to convey to the Mongolian people the "truth about the dangerous neighborhood."

What else did the US Secretary of State interpret while visiting Ulan Bator?

According to Kerry, who leads the news agency Reuters, The US is hoping for a close partnership with Mongolia, and their (US) "is inspired by a quarter-century история Mongolian democracy after liberation from the influence of the Soviet Union ".

Carried Kerry and a meeting with the "young Mongolian leaders" in the US Embassy in Ulan Bator.

And Mr. Kerry, apparently, hoped that such words and meetings would inspire the Mongols to some fateful accomplishments at the request of both the Secretary of State and the United States as a whole. However, it has not happened yet. The Mongolian media within a few hours after John Kerry’s bravura speech came out with materials about the unexpected and suspicious metamorphosis of the American leadership in relation to official Ulan Bator. After all, quite recently - just last year, the US State Department, headed by the same John Kerry, distributed a report on human rights in different countries of the world. And in this very report there was not a word about how “the USA is inspired by Mongolian democracy.” But in the material of the State Department it was noted that in Mongolia "there is no transparency of the activities of all branches of government, the effective work of the government has been undermined due to the presence of a substantial level of corruption." Officials of the US State Department also pointed out some “vagueness of election laws”. In particular, with the filing of certain groups of Mongolian human rights activists, it was stated that the electoral law infringes upon small parties claiming seats in the country's parliament. In Mongolia, it infringes, and in the United States, you understand, it does not infringe, and small parties there feel like fish in water ... Who ever heard anything about the success of a small party at the federal level in the US? .. So the Mongols did not heard ...

For obvious reasons, the spread of its influence in Mongolia is the “blue dream” of Washington. Indeed, by extension of influence, Washington primarily understands not the development of economic contacts, but the geopolitical component. And taking into account the geographical position of Mongolia, the United States could have an additional opportunity to test the strength of Russia and China. This is evidenced by the statement of the notorious US Senator John McCain, voiced at the beginning of last year. McCain then expressed himself in the spirit that "Mongolia is forced to seek protection from both the southern neighbor of China and the northern one - Russia, due to their unpredictability." The Mongols were quite surprised that they were “forced to seek protection,” just as many were surprised by Kerry’s current statements. But the fact remains that the United States is clearly going to probe the Mongolian soil on the subject of crops of anti-Russian and anti-Chinese relations and views. It’s unlikely that Washington will succeed in sticking US military bases all over Mongolia - the deployment of foreign bases is prohibited by Mongolian law, but it is well known even from recent history ... how persistent sometimes Washington is.

And the American administration, which in its place remains to act at all for a long time, is trying to cling to Mongolia with all the diplomatic forces so far.

And what about Mongolia? While clearly digesting the statements of US officials, but at the same time demonstrates that these same statements about the "threat from the north and south" are clearly exaggerated. Very clearly ... So, literally the day after Kerry’s visit from Ulan Bator came news that Mongolia is connecting to a large-scale project of Russia and China to create a long road transit route. Mongolian news agency montsame.mn reports that the Mongolian government 13 Jun approved a draft intergovernmental agreement on the implementation of international transit traffic through the Asian road network. This agreement includes support for cooperation in the field of transport, regulation of the legal relations of the parties in matters of trade facilitation between the three countries mentioned above and third partners from the region. In addition, it connects the giant transport networks of Russia, Mongolia and the PRC with the possibility of accessing other regions.

"Road" partnership is certainly great, but it is unlikely to remain the only breakthrough area in Russia's relations with neighboring Mongolia. For getting one more hostile state from its borders after a series of visits to Ulan Bator by American officials is an unaffordable luxury.