In the General Staff of the Armed Forces of Ukraine, Poroshenko spoke about how to deal with "Russian aggression" and respond to "hybrid wars"

14 2016 June
86
Today, President of Ukraine Poroshenko visited the General Staff of the Armed Forces of Ukraine to participate in the scientific-practical conference "Lessons of hybrid war: military aspects." The conference was fully devoted to how Ukraine “resists the aggression of Russia,” and how it intends to “resist in the future.” As it turned out, one of the methods is to move closer to the North Atlantic alliance.


Press office Poroshenko leads his statement:
Responding adequately to the actions of the aggressor, we must summarize the experience we have accumulated and predict the further actions of the Russian Federation in relation to our country. Constantly should be the search for effective strategies to protect against "hybrid threats". The lessons of this war should be studied, relevant concepts of counteraction tested and confirmed, national capabilities and compatibility with NATO should be improved. 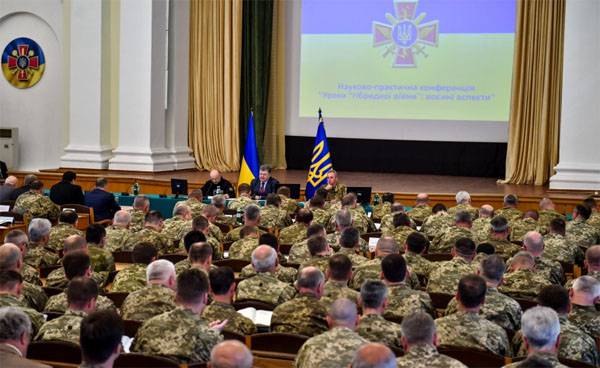 According to Poroshenko, it is already necessary to take care of the fact that “even before NATO membership in Ukraine, NATO infrastructure was created”.

Poroshenko:
We must define and ensure strict compliance with the legal and technical requirements for the development and adoption of equipment and equipment that are uniform for all law enforcement agencies, taking into account the standards of NATO armies.

Poroshenko also stated which methods “the aggressor uses against Ukraine” (the aggressor in Ukraine today means only one state, and this is Russia):
This is not only offensive and aggression on our borders. It is also an active informational and propaganda war in order to sow discord, disappointment, oppression within Ukraine, stipulating our state, its leadership, army and people. The enemy is trying to shift efforts to destabilize the internal situation in Ukraine.

Poroshenko did not specify how you can specify the state in which Maidan insanity is put at the forefront, and which has long been stipulated by the Maidan authorities themselves.

Poroshenko:
The hybrid war launched against our state requires us to continue to apply an asymmetrical complex response to threats. Defense against hybrid aggression must also be hybrid. In the case of aggression, the issues of building territorial defense, taking into account the experience of the last two years, should be carefully worked out. Also, in the event of a full-scale invasion, a plan for the general mobilization and functioning of the country under martial law should be polished. The fact that we are not announcing a general mobilization is only due to the fact that the campaign to build a contract army is effective.

But statistics says that mobilization is not announced because many Ukrainians simply ignore the agendas coming from military registration and enlistment offices, including being "on the territory of the aggressor" as guest workers.

At the end of his speech, Poroshenko announced that the security of Ukraine was the task of not only the authorities, but also of each of the citizens.

From the statements of Poroshenko, some Russian media have concluded that the president of Ukraine "ordered the creation of a partisan movement in Ukraine."

And a few minutes ago, the President of Ukraine Poroshenko on Facebook reported that the citizens of Ukraine Soloshenko and Afanasyev, convicted in Russia, had flown to Kiev from Moscow. The decision to return the convicts was taken this morning.

Poroshenko:
Finally!
Yuriy Soloshenko and Gennady Afanasyev are already on board the Ukrainian aircraft and depart from Moscow to Ukraine.
How long have we fought for this moment! 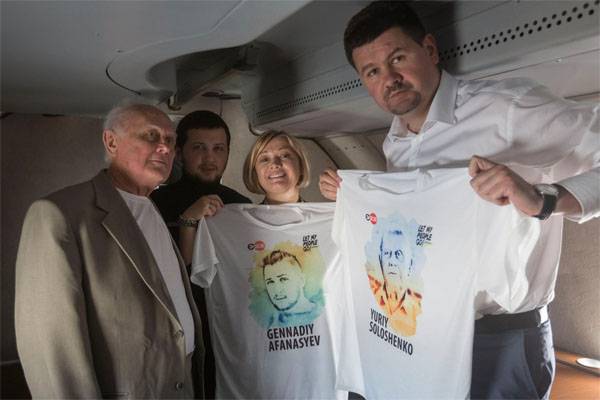 After Savchenko’s return, which was also “fought for a long time”, a wave of paranoia swept over Ukraine, claiming that “Savchenko was recruited by Russian special services” ...

Ctrl Enter
Noticed oshЫbku Highlight text and press. Ctrl + Enter
We are
The action “Military service under the contract is your choice!” In Rostov-on-Don: future contract servicemen, exhibitions and “Russian Knights”Rogozin visited Nizhny Tagil, shot from a tank and a gun
Military Reviewin Yandex News
Military Reviewin Google News
86 comments
Information
Dear reader, to leave comments on the publication, you must sign in.